Trending
You are at:Home»Schools»Haddonfield»Weeks Ahead of Referendum, Haddonfield Schools Face Bond Opposition

A group of borough residents is calling for the school district to reduce the size and scope of its upcoming $35-million bond. The district says the repairs are urgent and necessary.

On March 8, voters in Haddonfield will take to the polls to decide whether to authorize some $35 million in improvements to the local school infrastructure.

As the Board of Education works to communicate with the public about the needs of the repairs, a group of Haddonfield residents incorporated as a nonprofit organization, CURB (Citizens Urging a Responsible Bond), has thrown its opposition against it.

“What’s the most concerning to our group is the size and scope of this particular bond,” said CURB organizer Christine Schultz. “We’d like the school district to seek a smaller, more manageable bond for repairs.”

CURB has three major objections to the referendum. First, that the proposal is “an unprecedented single amount” for Haddonfield residents to consider, Schultz said; roughly equivalent to bond measures passed in 1999 and 2004, which together totaled $34.3 million.

Secondly, those previous referenda paid for work that CURB alleges was done poorly and with “defective materials,” she said, calling into question the ability of the board to oversee the project without professional assistance. Finally, Schultz said her group believes that the bond includes nonessential costs that have artificially inflated it beyond a reasonable figure.

To remedy those concerns, Schultz said that CURB wants the district to appoint a citizen advisory board to the planning process, incorporating the technical expertise of Haddonfield resident professionals. CURB also wants public charettes with the board’s appointed architect, Becica Associates, to infuse community input into a process that Schultz said has lacked transparency.

“The district is requesting a lot of projects that have already been addressed in previous taxpayer-approved bonds,” she said. “What is of great concern is the oversight moving forward with this high bond.”

Schultz argued that the board has already demonstrated its ability to reduce the scope of the bond: a potential $80 million proposal was never formally presented to the public, but has been alluded to by the district. Rather than focusing on building envelope issues, such as concrete sidewalks and replacement windows, Schultz said she’d rather money were bonded exclusively to repair masonry and roofing, halt water infiltration, and regulate boiler systems.

“It’s not about paying less; it’s about the quality of the investment we are making in our schools,” she said. “The whole process basically has been flawed. When you start out with a bond, and it’s $50 million, and it changes, it sets everybody off on the wrong footing.

“The community is generous, and they’re very reasonable, and once the board has engaged the community and done their homework, there won’t be an issue,”Schultz said. “Moving forward, the community wants a smoother process.”

‘We need to keep our buildings standing’

Haddonfield Superintendent Richard Perry argued, however, that the district has discussed its capital needs publicly and in depth for the past three years. Its paring-down of the bond cost reflects the level of public engagement the board has committed to the process, and specifically with members of CURB, he said. The district even underwent a state audit that Perry said found no evidence of either financial mismanagement or faulty workmanship stemming from its prior bonds.

“We’ve been through two architects [and] a couple engineers,” Perry said. “We’ve even had people come in to examine our boilers. We’ve been extremely engaged with [CURB]. We’ve listened to them, and we’ve cut down the bond significantly.

“We cut it from $80 [million]to 60 to 50, and we got to the point with all the public input, especially from that group, where we said, ‘Let’s keep the structural integrity of our school.’ We cut down all the educational components and said, ‘What do we need to do to keep our buildings standing?’”

To do what CURB is requesting—break up the $35-million referendum into a series of smaller bonds—would ignore critical needs that must be resolved within the next few years, Perry said. Asking the district to put off any of them would force it to close off things like the high school “B” gym, cafeteria, faculty dining area, and the classrooms above them.

“If we stagger them now, which ones am I going to pull out first?” Perry said. “Do I risk kids playing in the gymnasium? Windows in the elementary schools? The last time any work was done on the high school is was 1972. I was in seventh grade.” 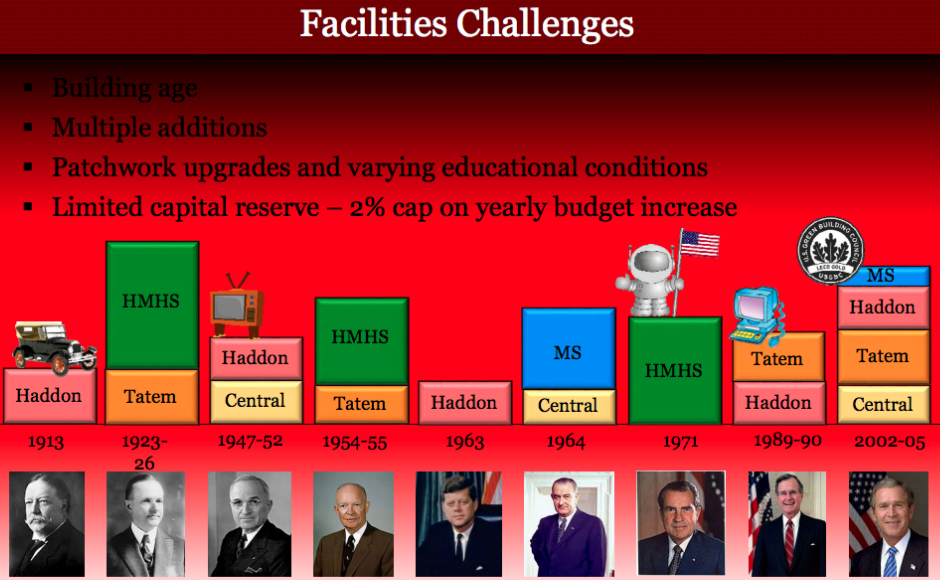 Perry said that the board has been frustrated with the criticisms of CURB because the group doesn’t seem to have a number in mind for an acceptably low-cost referendum, and because the items it describes as nonessential affect what he believes is a negligible percentage of the proposed bond. In trimming back the cost of the bond, the district is already putting off repairs to buildings that haven’t been upgraded in decades.

“The A wing at the high school, we’re not going to repair that, and at some point it’s going to have to be repaired,” Perry said. “We removed some of the basic [repairs]from the [budget for the]elementary schools, from the middle school; various electrical upgrades.

“We asked [CURB], ‘What number would you be happy with?’” he said. “We had to look at what needs do we have to make sure these buildings are safe at a minimum. That’s all it’s ever been about: electrical, foundations, masonry, downspouts.”

Even separating into secondary questions the costs of repairing the high school stadium, which dates back to the New Deal, and a track surface that has reached the end of its useful life, leaves the district potentially scrambling to find such money in its regular operating budget, or foregoing a portion of its athletics programs, which have long been a point of pride. Demolishing the stadium in favor of a metal bandstand would cost about as much as repairing it, Perry said; voting down the track repairs would keep a project that is eligible for state aid from getting those extra dollars in offsetting costs.

The entirety of the bond would increase taxes in a household assessed at the borough average ($484,226) by an estimated $254 to $301 annually. On a 25-year bond, the costs of air conditioning and utilities efficiencies amount to $31 per household annually; stadium repairs are $16 annually.

The superintendent also said the cost of the referendum is estimated conservatively more expensively than it may be. For example, the district is eligible to receive 40-percent of its costs in state aid, but the proposal only counts on some 34 percent. Any money reserved from cost overestimations or more favorable bond ratios would go to offset that debt.

“It’s not extra money to spend on something else,” Perry said.

As much as Perry said the district appreciates the close attention that groups like CURB pay to its work, he also disagreed that establishing a community advisory group for capital improvements would lend itself to a viable process.

“You would have engineering professionals and architects having to justify and hold up work in terms of what officials would say on an advisory committee,” he said. “What would the implications be as far as liability if some things go wrong?”

If the bond measure doesn’t pass, the board could return the issue to voters as early as September. If it fails a second time, Perry said the district can appeal to the state commissioner of education for an override.

“We have to address these needs and the board knows it,” he said. “You can’t create a bond that makes the building unsafe, and they have a responsibility to make them safe.

“Somebody is going to have to fix [the buildings],” Perry said. “The longer it waits, the more expensive it becomes.”