Two people were traveling in the car, and one was treated at the scene for burns. A vehicle fire shut down the eastbound lane of Cuthbert Boulevard for about an hour in Haddon Township this morning.

Westmont Fire Company Chief John Medes said the incident was called in at 10:18 a.m. around the intersection of Cuthbert Boulevard and Addison Avenue.

The driver of the car was treated for burns on his hands; the passenger with which he was traveling did not appear to have been injured.

Medes said the vehicle had been traveling with supplementary gas cans, which did not ignite. 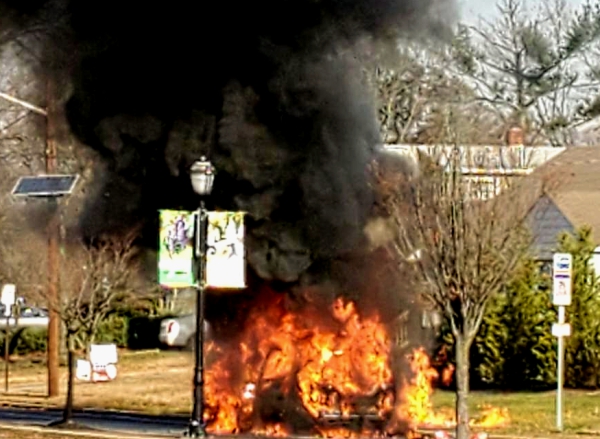 Half an hour after firefighters interceded, the car, which had Ontario vehicle plates, was a smoldering wreck.

Preliminary investigation seems to indicate that the fire was accidental, but it’s still under investigation, the chief said.

Last year, Chrysler recalled more than 10,000 Pacifica hybrid models due to a technological malfunction that can cause the vehicle to catch fire.

According to Green Car Reports:

In the vehicles affected—2017 and 2018 Chrysler Pacifica Hybrid models with production dates of August 16, 2016 through August 7, 2018—the gasoline engine might not start properly after the vehicle has been operating in its plug-in (electric) driving mode, resulting in unburned gasoline entering the exhaust catalyst. That fuel could potentially ignite, increasing the chances of a vehicle fire.