The monument contains artifacts sourced from all three sites affected by the attacks and was assembled with local, volunteer labor. 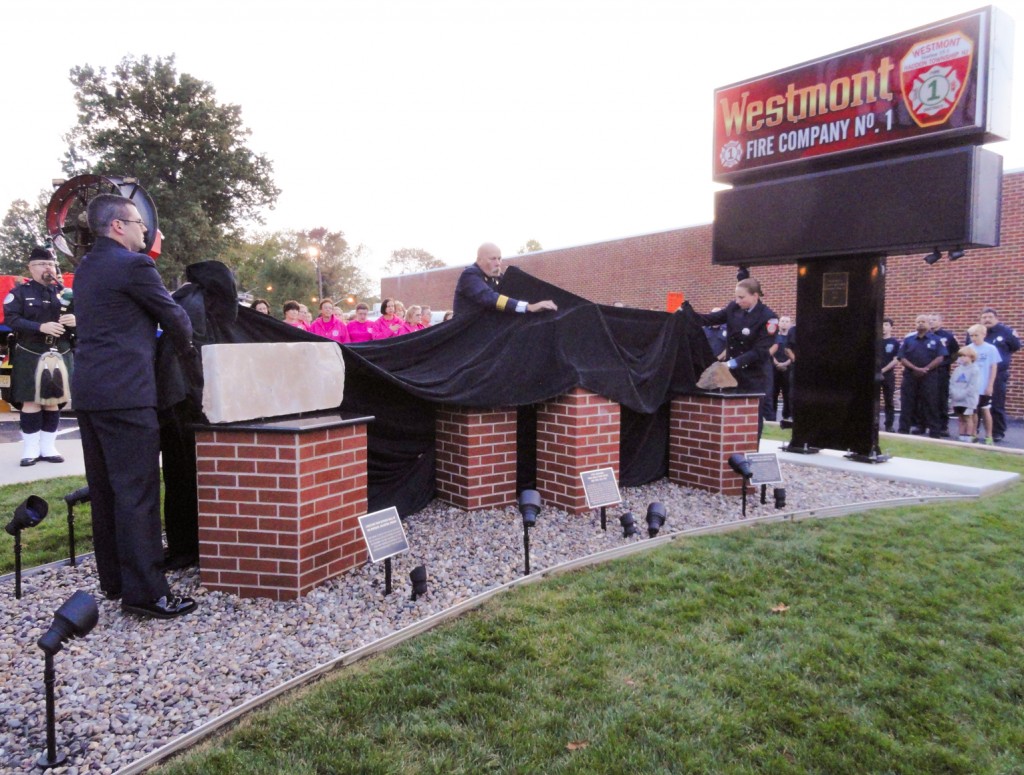 Voigtsburger’s ambulance was dispatched with New Jersey Task Force One in an effort to retrieve any injured emergency responders in the wreckage of the violence.

He described the time in one word: “Hell.”

“No bodies; no live people,” Voigtsburger said. “Everyone we ran into, they were dead. You just smelled the death in the air.”

Voigtsburger counts himself among the mourners that day, having lost two friends in the attack: brothers Thomas and Peter Langone, a New York City police officer and firefighter, respectively.

His is just one of the many lives touched by the events of that day, but for Voigtsburger and others, his hometown will now have a place where he can reflect on them. 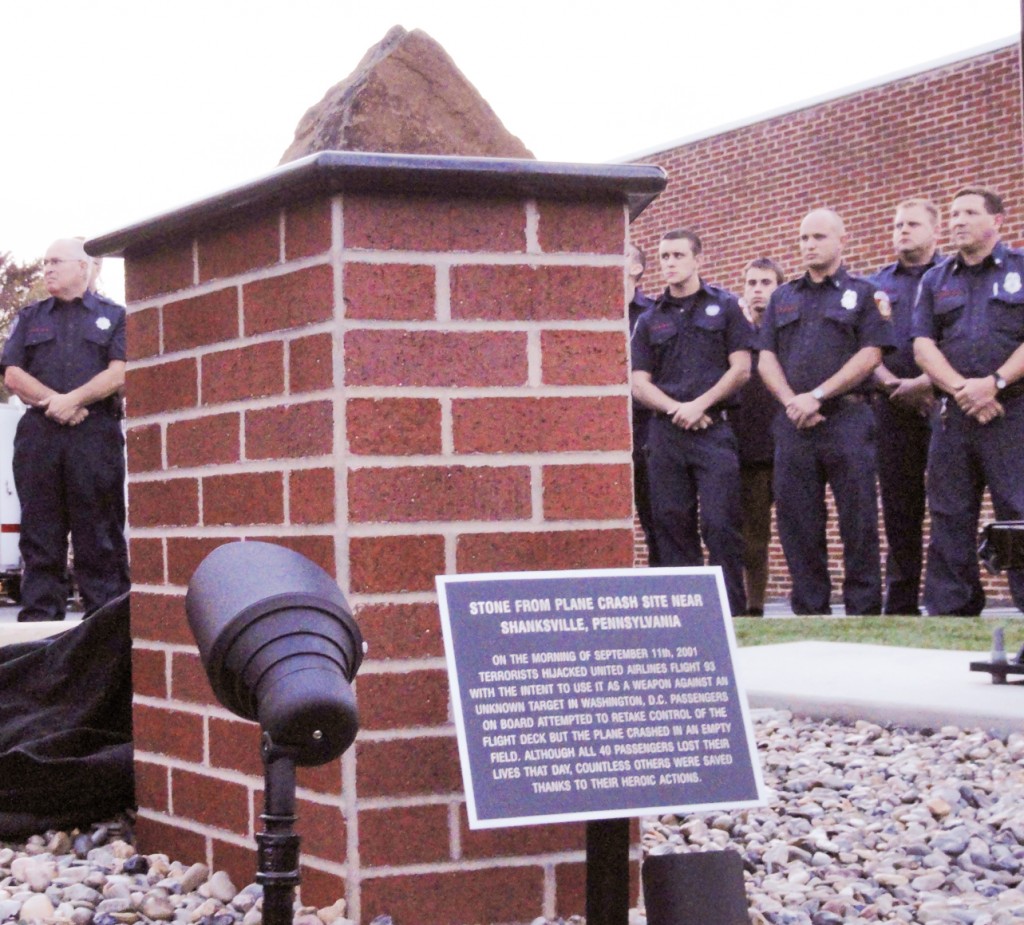 A stone from Shwanksville, PA, where United Flight 93  crashed, is contained in the Westmont Fire Company 9-11 memorial. Credit: Matt Skoufalos.

The Westmont Fire Company unveiled its 9-11 memorial just before sunset on October 4. A crowd of onlookers watched as the tribute unfolded with a solemn bagpipe performance and eulogies of those lost in the tragedy.

Haddon Township native Danielle Kousoulis, who perished in the attacks, was remembered at the dedication by her brother, Peter.

Danielle’s office was on the 104th floor of One World Trade Center, he said, and “once the plane hit, she was trapped up there.

Still, Peter Kousoulis said, “On that morning, she was sharing her cell phone for others to call their family members.”

Louis Giaccardo, who managed the operations department for Corporation Services Company, was in the stairwell of the 87th floor of the south tower when the first plane hit. He managed to escape 25 minutes before the second building collapsed as well.

Giaccardo, a 15-year Haddon Township resident, asked the crowd to consider the firemen “who went down looking for survivors [and who]are still suffering.

“Please leave them in your prayers,” Giaccardo said. “These firefighters knew that these buildings could have come down at any time, but they rushed in.” 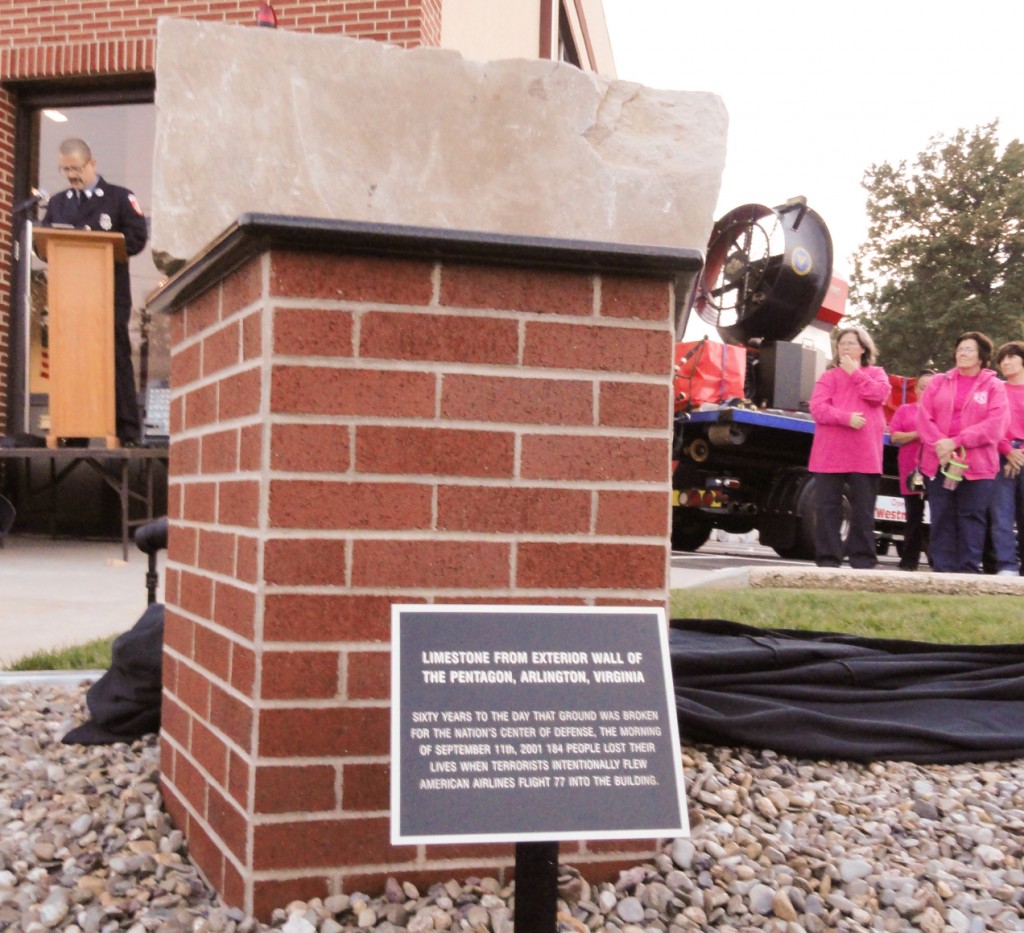 A piece of the Pentagon building contained in the Westmont Fire Company 9-11 memorial. Credit: Matt Skoufalos.

Firefighter/EMT Barbara Hauber, the company’s vice-president and a driving force behind the monument, called it “overwhelming,” “important,” and “extremely meaningful.

“Westmont Fire Company is where the town goes for memorials,” Hauber said. “[It was] almost overdue for the town to have a 9-11 memorial.”

When the news broke that the company was erecting its memorial, offers of assistance came pouring in. Diener Brick donated building materials used in the bases of the pedestals. Convoy’s Corner provided an epoxy coating that will protect the individual relics. Staudt’s Metal Products donated the time and labor of a welder who assembled the components.

Lighting at the project was designed by Ritz Theater volunteer Chris Muller, and the Haddon Township Department of Public Works also lent the time and labor of its staffers to the project. 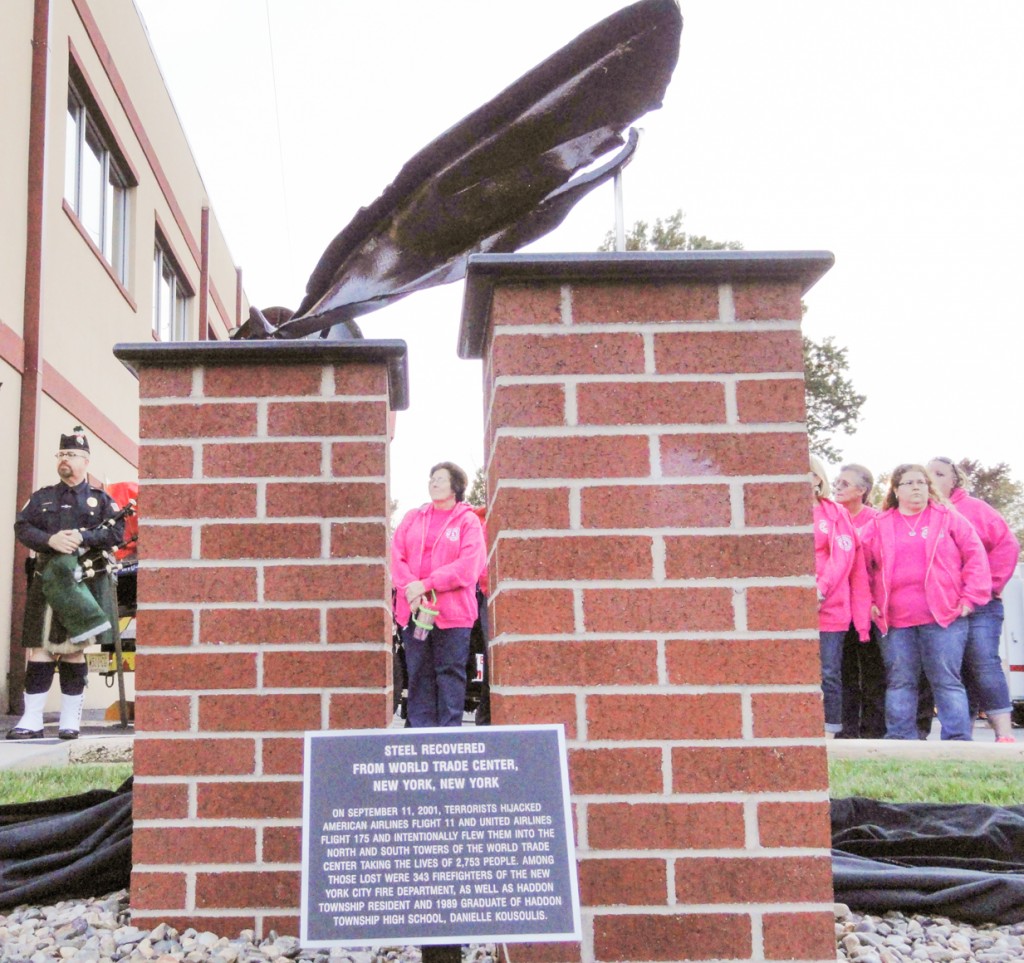 A piece of steel from the World Trace Center is contained in the Westmont Fire Company 9-11 memorial. Credit: Matt Skoufalos.

Artifacts contained in the statuary were sourced from the Pentagon; the field in Shanksville, PA where United Airlines Flight 93 was grounded by its passengers; and the World Trade Center. To receive them, Hauber had to submit copies of the memorial plans to the National Parks Service, the Department of Defense, and the Port Authority of New York.

It took two years to finalize the memorial, Hauber said, mostly because the final artifact didn’t arrive until this summer. Its estimated cost, including donations from the company’s auxiliary and gifts-in-kind, approaches $15,000.

Westmont Firefighter/EMT Matthew Gallagher, another key planner of the monument, said he hopes it will provide a lasting tribute to future generations too young to remember where they were during the tragedies of 9-11.

“Having kids come up and say, ‘Is that actually from the twin towers? The plane crash in Pennsylvania?’” Gallagher said. “It’s nice to be able to incorporate [those relics]in memoriam of those who put their lives on the line.” 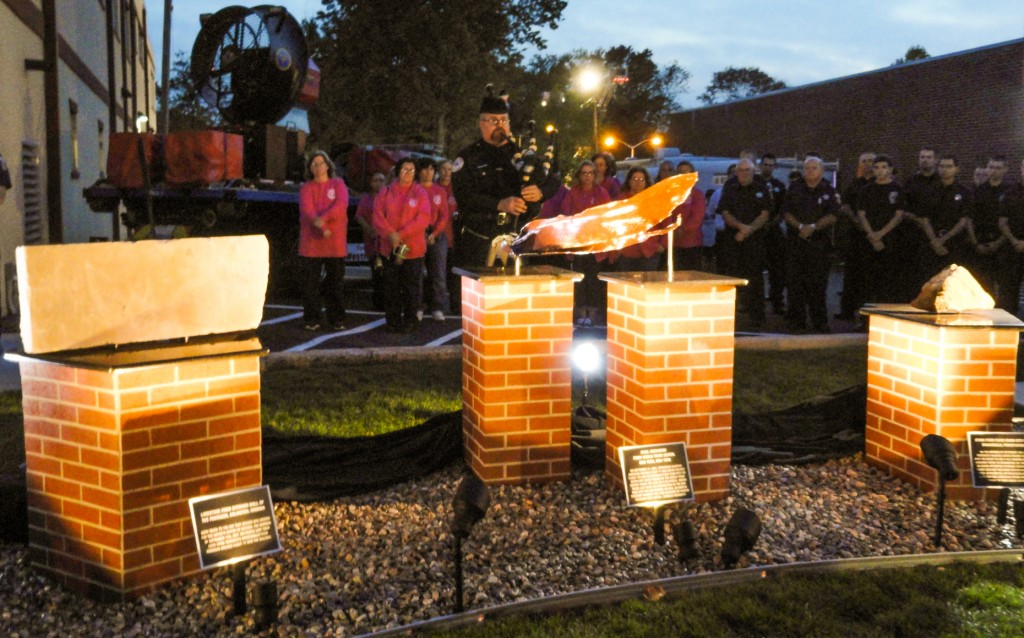 The sun descends on the 9-11 Memorial dedication in Westmont. Credit: Matt Skoufalos.