Trending
You are at:Home»Opinion»What Keeps You from Paying for News?

As NJ Pen enters its third year, and we continue to search for ways to keep it going longer, the missing piece of the equation is a paying readership.

Three years ago this week, we started NJPen.com with an old laptop, a lot of goodwill, and the effort necessary to do a lot of work for no pay.

Since the inception of the printing press, newspapers have been largely paid for by advertising sales, but for the first year of operations, we didn’t even have a platform that could host an ad. After a couple of revisions, we did.

Getting people interested in our work hasn’t been difficult to do. We know that telling people stories about what’s happening in their hometowns—and telling those stories faithfully, well, and with vetted information—is a formula for success. But doing it for free is not a formula for sustainability if there’s not enough buy-in from readers.

That’s why, right at the bottom of every article, we include some boilerplate language. It looks like this:

There’s a few links embedded in that text. Two of them drive more traffic towards our social media pages: aspects of the news business that have become necessary to it, but which are not owned by news companies.

On those networks, our business occurs only in the ways those social media companies allow, and it is limited. As a small, local media outlet, any benefit we generate from participating in those systems is secondary to that of companies like Facebook and Twitter. The audiences we are encouraged to grow there are audiences for their products, their services, their revenues. They control those audiences and how much of them our messages reach. When we build followers there, it’s not for our long-term sustainability; it’s for theirs. 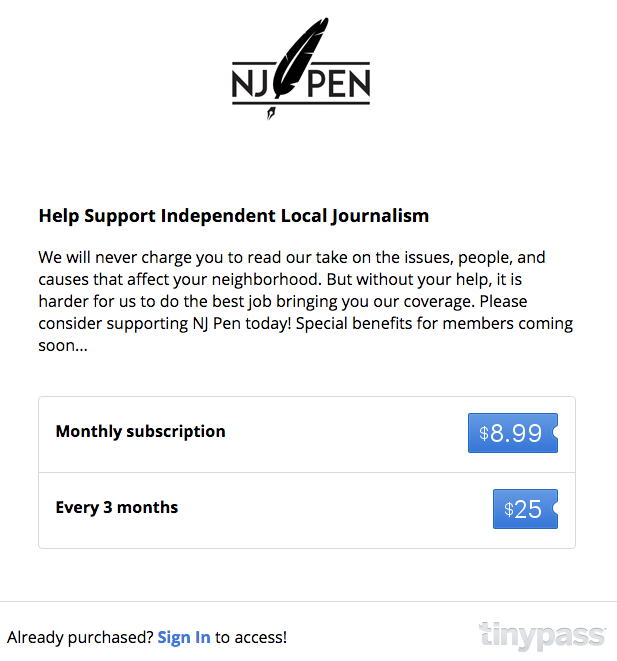 The third link is ours alone.

It takes you to a page that might not show up on your web browser if you have an ad blocker on.

It’s the only screen takeover ad on our website, and for the foreseeable future, it’s the only one we’ll have.

It takes you to a page that invites you to sign up for a monthly subscription to our service.

We set the minimum price at $8.99, and if you sign up for a three-month run, it drops by another two bucks.

That $8.99 figure isn’t an arbitrary one. It was designed to be the same price as a month of Netflix, an entertainment service that provides a fast, reliable, on-demand product.

NJ Pen is an information service, similarly quick, similarly reliable, also accessible on demand. In making that connection between the two ideas, we hoped that our readers would find the price for our service just as affordable.

But there are many differences between Netflix and NJ Pen, not the least of which is that the former has 89 million paying customers at that $8.99-a-month rate, while the latter, at last count, has 89.

It’s not that we aren’t finding an audience. In three years of doing the news, we’ve reached millions of readers, and we’re still growing. That’s saying something, especially considering we’re a one-reporter operation covering nine Camden County communities. But despite having a responsive audience, offering unique incentives for paying members, and keeping our site free of paywalls, the majority of our readers aren’t financially supporting our work. Why not? 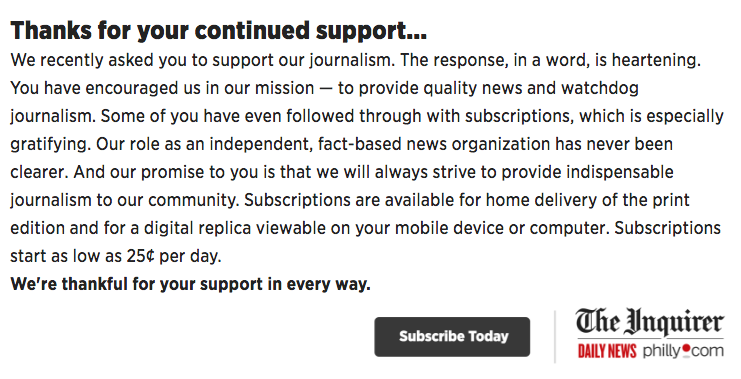 We’re not the only organization asking this question.

There are paragraphs similar to the one pasted above that appear at the bottom of articles on much bigger news sites, like Philly.com or The Guardian.

But we don’t have their overhead, and we aren’t trying to support the systems they’ve built around themselves.

We’re trying to provide a responsive, local, accountable, source of information that helps people in a small geographic radius make informed decisions about the communities in which they live.

We’re trying to be a resource for understanding important changes to those communities, their neighborhoods, business districts, governments, and schools.

We’re trying to do the job of local news, which is to tell the stories of the people who live where we live. And we’re doing it in a meaningful way, independent of any corporate ownership or public authority.

Clearly, not everyone who reads NJ Pen is going to be able to financially support it. So, for those who can handle the cost, it’s a question of choice. If you’re reading this, and you’ve benefited from the information we provide, what would make you decide to pay for it? What could we do more, or better, or differently to help you justify the expense?

Shaming, scaring, or begging people for help will not make them value our work any more. It’s a question of worth. What is the work we do worth to you? How can we make it worth more?

We know we’re not the only media outlet in your life. But we want to be the one that matters the most to your day-to-day life. In order to do that for another three years, the support we need has to come from you.

How do we close that loop?