Trending
You are at:Home»Business»What’s Happening to the White Horse Statue in Lawnside?

The local landmark was brought down from atop its perch in the Lawnside Plaza last week, but information about its ultimate fate remains scarce.

For its place of prominence along the road that bears its name, the elevated white horse statue that has presided over the historic Lawnside shopping plaza for decades has been something of a background character in the daily lives of passersby.

That’s until it was removed, quickly, publicly, and with little explanation last week 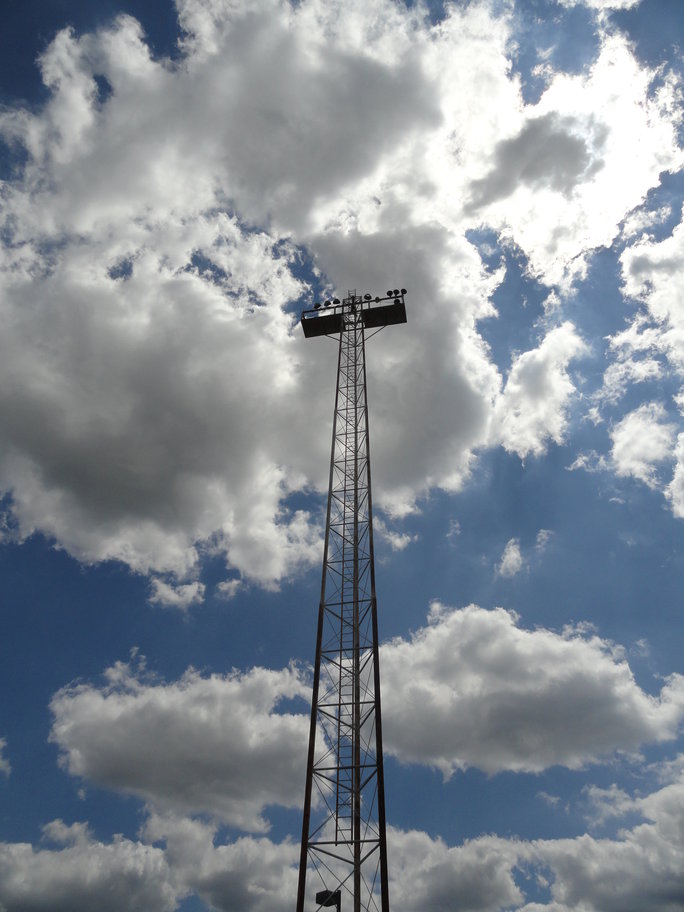 The pedestal atop which the White Horse statue has sat for years, now empty. Credit: Matt Skoufalos.

Lawnside Mayor Mary Ann Wardlow was unavailable for comment, but according to a government official, the borough police department received a complaint that the statue was unsafe.

That complaint was passed down to the Vornado Realty Trust, a New York-based property company that owns the Lawnside Plaza, which moved swiftly to take it down.

The sign was removed by Thackray Crane Rental of Philadelphia July 24, and a flatbed truck was dispatched to the location to remove it on Friday morning.

Owner Bob Thackray told NJ Pen on Monday that the remains of the statue were held over the weekend in a Camden storage yard while the company secured wide load permits to transport them to its Philadelphia facility.

“They cut it down some,” Thackray said, adding that he’d heard the statue “was just dangling in the breeze” on Thursday.

The scene had been barricaded off Thursday evening, but that didn’t stop vandals from scavenging a souvenir, according to a worker who commented Friday that the horse’s tail had been cut off.

The statue was in two pieces on the ground Friday, prompting questions about whether the condition of its back legs would have been the alleged safety concern alluded to by borough officials.

Removal of the statue created a minor stir among area residents and on social media, primarily because there was scant information as to its fate. Lawnside borough government offices are closed on Fridays in summer, and phone calls to Vornado were referred to a spokesperson, who did not return repeated requests for information.

That mystery was compounded by a dearth of information about the origins of the horse itself. Researchers at the Camden County Historical Society couldn’t locate any background on the sculpture, which the Drive-In Adventures blog remembers as a remnant of the White Horse Drive-In movie theater. 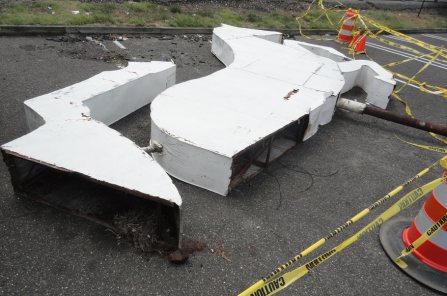 The White Horse statue, in two pieces on the ground Friday in Lawnside. A flatbed truck nearby waited to cart it off. Credit: Matt Skoufalos.

According to a brief history of the roadway published in the South Jersey Times in 2011, the White Horse and Black Horse Pikes were state incorporated toll roads designed to connect the port city of Camden with Atlantic City.

In the heyday of turnpike travel, roadside attractions (like muffler men) were more common advertising gimmicks that later evolved into landmarks.

The white horse statue had clearly become one of those for Lawnside resident Chuck Wagner, who said that its image was a comforting presence to him as a child on drives from his parents’ home in Gloucester Township to visit his grandparents in Camden City.

“In recent years I called it my guardian friend,” said Wagner, who worked at the Lawnside Pathmark supermarket, now a ShopRite, for five years.

“It kind of watched over us,” he said. 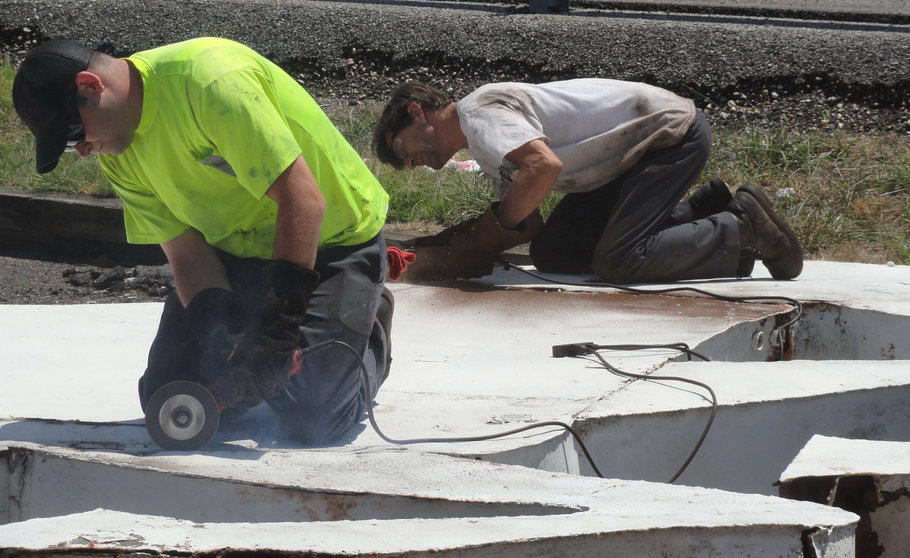 It was Wagner who watched over the horse Friday as workers went about the business of decapitating the metal hulk of a statue with circular saws.

He had been there the night earlier to see it come off its pedestal, and said he’d patted its nose to say goodbye.

Stick with NJ Pen for further updates as we have them.