Pamphlets espousing ‘replacement theory’ were laid out on seats in a train car Sunday night. They are attributed to an Arkansas ministry whose pastor is the national director of the Ku Klux Klan. 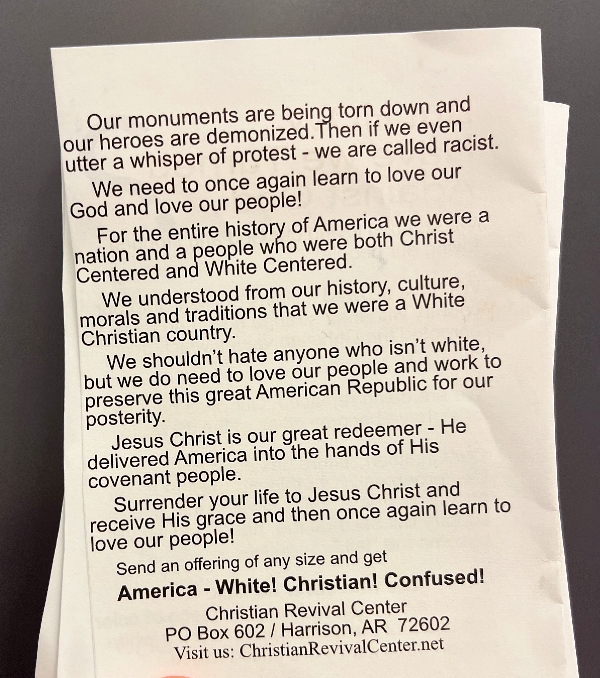 The leaflets, which claim that America is besieged by “curses we face for turning against God,” were first discovered on a westbound train departing from Collingswood around 7:30 p.m. on Sunday, July 11.

A PATCO rider, who declined to be identified for this story, found the papers on the train car in which they were traveling, and then noticed that copies had been laid out across three or four other rows of seats.

“As soon as I realized what it was, I grabbed all the pamphlets I could find,” the rider told NJ Pen.

Mike Williams, spokesperson for the Delaware River Port Authority (DRPA), which oversees PATCO, confirmed that the pamphlets were only placed on three seats in one train car, and that “the literature was subsequently removed by another passenger.

“PATCO is disappointed that someone used PATCO property to place this type of divisive material, and kindly reminds PATCO riders who see anything inappropriate while using the PATCO System to notify PATCO staff or use our ‘Look Up. Speak Up.’ mobile app,” Williams said.

Williams did not confirm whether DRPA would be filing a bias incident report as a result of its investigation. Collingswood Police did not respond to requests for comment at press time.

The leaflets feature contact information for the Christian Revival Center of Harrison, Arkansas, a Christian Identity group led by Pastor Thomas Robb, who has been the national director of the Ku Klux Klan since 1989.

The Southern Poverty and Law Center describes Christian identity as a “radically racist religious sect…rooted in antisemitism and white supremacist theology,” albeit one whose influence has waned since the 1980s.

The rider who identified the materials said they were particularly disturbed to think that the propaganda had been left there to harass and intimidate PATCO passengers.

“It’s a train that links Black, brown, and Jewish communities,” the rider said. “It’s easy to convince yourself that these people aren’t on the train with you, but they are.” 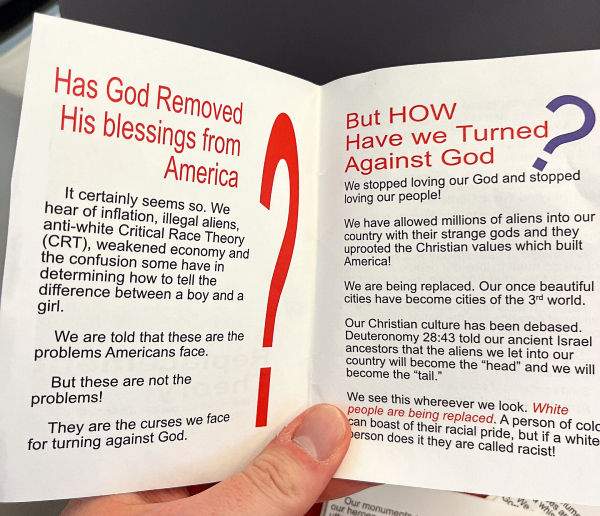 In April 2022, the New Jersey Office of the Attorney General (OAG) said 2021 had been a record-high year for reported bias incidents in the state.

The OAG noted that uptick is likely a combination of more thorough reporting metrics as well as an increase in bias crimes nationwide.

The Anti-Defamation League (ADL) similarly reported that 4,851 cases of white supremacist propaganda were logged across the country in 2021, down slightly from the 5,125 reported in 2020.

However, ADL reported that this is the first time, to its knowledge, that propaganda from the Christian Revival Center has surfaced in New Jersey. Andrew Goretsky, ADL Regional Director for Southern New Jersey, described the pamphlets placed on the PATCO Speedline as part of the troubling increase in white nationalist rhetoric.

“The promotion of the virulently antisemitic and racist Great Replacement conspiracy theory is particularly disturbing, as this is the rationale used by the white supremacists who carried out mass shootings attacks in Buffalo, Pittsburgh, El Paso, Christchurch, and Poway. ADL is working closely with law enforcement and the community in response to this incident.”

A number of local bias incidents have already been identified this year in nearby Haddonfield, including racial slurs leveled at a junior varsity baseball player during a high-school competition, as well as swastikas that were spray-painted on trees outside the Haddonfield Friends Society and in the parking lot of the borough middle school.

This story was updated July 14 with additional commentary from the Anti-Defamation League.