Borough offices have been temporarily relocated to the Collingswood Senior Community Center after the storm. The damage could accelerate timelines for bigger changes. 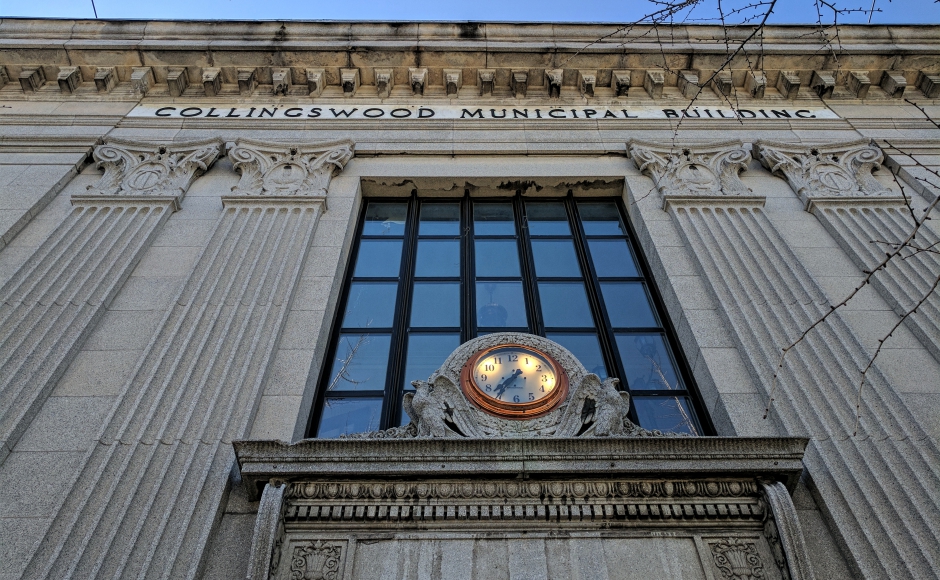 Collingswood Borough Hall was designed in 1926 for the Collingswood Trust Company but closed not long after the 1929 stock market crash. Credit: Matt Skoufalos.

For more than a few years, Collingswood Mayor Jim Maley has been considering a long-range plan to relocate borough operations—public works, police, and government services—from their current digs in the central business district.

After last week’s ice storm, the timetable for that project may be moved up.

Water damage has been an ongoing concern at borough hall, the mayor said, but during “Winter Storm Stella,” the 91-year-old building blew its scuppers.

The antique structure that historian Janet M. Spavlik described as “one of the earliest bank fatalities of the Great Depression had weathered countless storms since it was built for the Collingswood Trust Company in 1926, but finally gave way after Stella, forcing borough employees out last Friday.

By Monday, they were back in business on the other side of Collings Avenue, working in the game and living rooms of the Collingswood Senior Community Center. Damage estimates will determine the length of their stay. 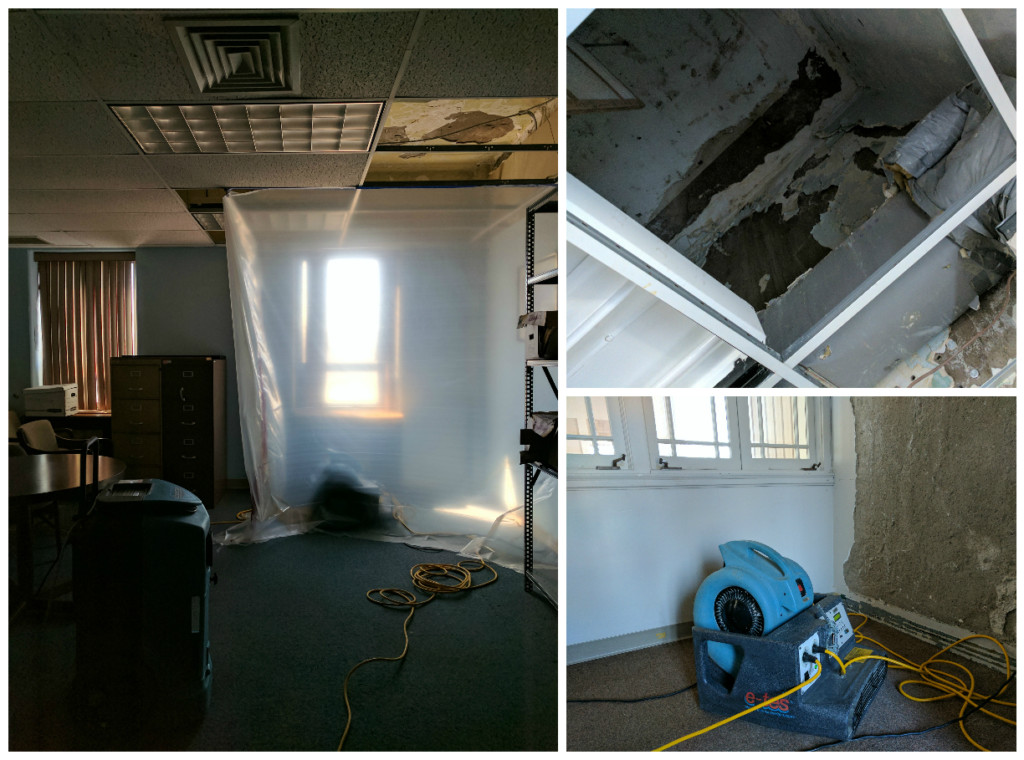 Samples of some of the storm damage in Collingswood Borough Hall. Credit: Matt Skoufalos.

“We had some pretty bad leaking, pretty much like rain,” Maley said.

“In a couple spots, they had to tarp whole work areas and funnel the water into collection basins, and we had to move everybody out.”

As he waited for insurance adjusters to survey the property, Borough Administrator Keith Hastings pointed out the ceiling that had been torn out of his office. Fans hummed behind a wall of plastic sheeting.

In addition to the storm damage, the building has been in need of upkeep. Architectural pillars in the main lobby are collecting crumbling plaster. Walls and ceilings in the second-floor finance offices have chipped or washed away. On the third floor, a stairwell-adjacent conference room absorbed some of the worst water damage.

Staff cross the street back and forth from the building (weather permitting) to the community center, where first-floor rooms have been divided into bullpen-style service tables. Departments are identified by tape-and-paper signs; desks have been fashioned from folding tables, some of which are screened with drapery.

“There wasn’t so much as a full-hour skip in services for people in that time,” said Collingswood Director of Community Development Cass Duffey. “This whole thing happened for us within a matter of 24 hours.”

The lobby television flashes a different image every few seconds: an arrow pointing right for the Taxes, Water, and Sewer offices, left for Borough Clerk Holly Mannel. A notice about Tuesday’s chair yoga class offers a reminder that the building they’re in already keeps an active calendar. 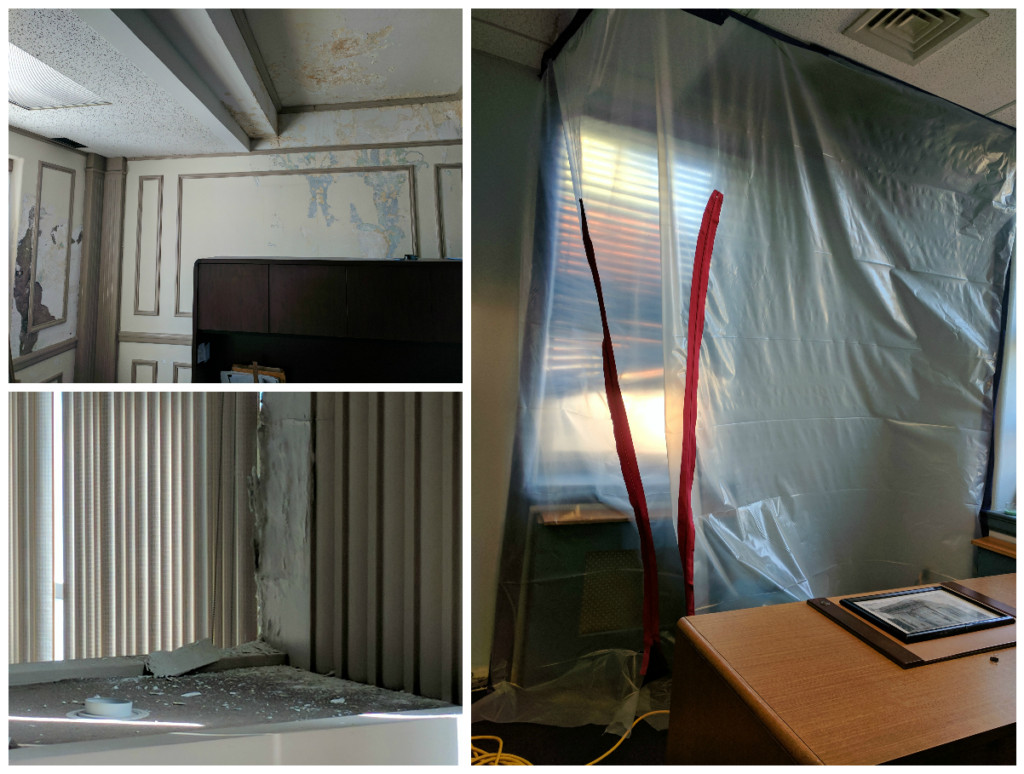 In addition to the storm damage, Collingswood Borough Hall has suffered from deterioration due to its age. Credit: Matt Skoufalos.

A few days into the condensed layout, the offices are active. Upbeat, staff are nonetheless also hopeful that repairs will be inexpensive and soon in coming.

Maley said the optimal outcome would be to “just limp along at the community center” until the work is done.

If repairs were to stretch to a six-month timeline, the borough would rent formal office space elsewhere, he said.

Commissioners are also meeting next week to take a look at concepts for “more permanent solutions” that Maley previously said had been on a longer timeline.

“We might be trying to see what we can do to move that up a little bit,” he said.

Depending upon the suitability of the site, the borough could build a new DPW garage at the former M & E Marine Supply Company on Route 130. 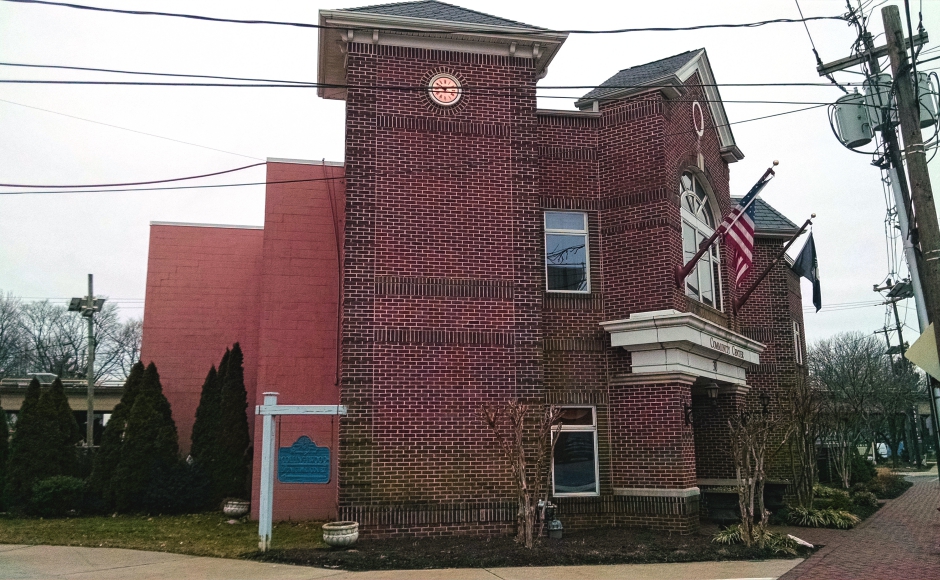 Its police station would be moved either to that location or to the White Horse Pike offices of the Volunteers of America Delaware Valley, which is moving its operations to Camden.

The borough government might then find a permanent home in an expanded community center building, which still sports an unfinished facade “because the plan was always to extend that building,” Maley said.

Collingswood would then sell Borough Hall (currently assessed at $1.174 million), finish the community center, and move its offices, court, and commission chamber there.

“All of that’s a longer-term project, but we kind of have to get it to the front of the drawing board,” the mayor said. “Part of this process is looking at how we could possibly structure this to do it.”

Collingswood is scheduled to retire a significant portion of its municipal debt in the next five or six years, and if the projects can be planned carefully, “you could get a lot of this work done without it having any impact on our budget,” Maley said. 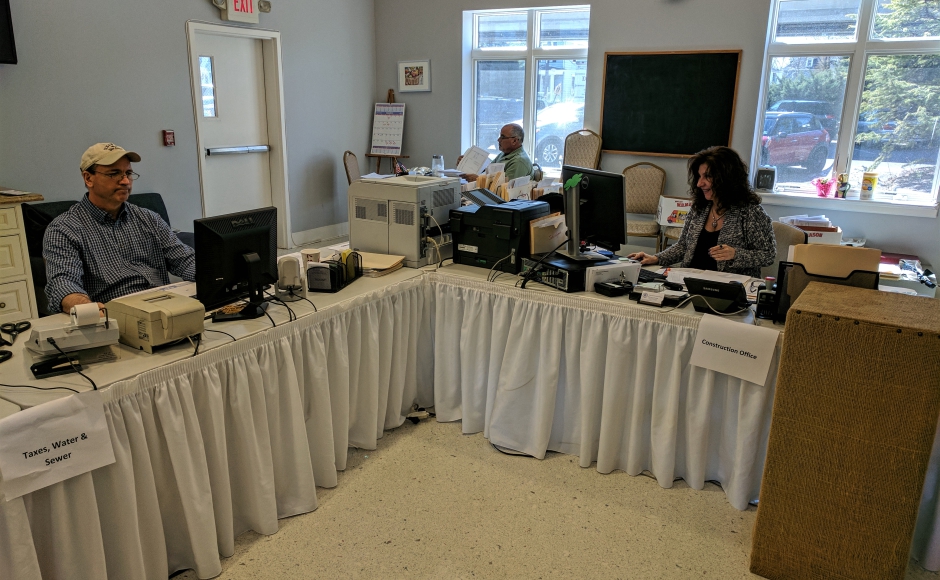 “We have to do something because borough hall needs some very substantial investment, and for the use of it as a borough hall, that investment really doesn’t make any sense right now,” he said.

“It might make a great architect’s office, restaurant, office building.

“Right now we’re band-aiding it, and trying to keep our employees safe, and still conduct business.”

Although the borough will continue to conduct business in the community center for the foreseeable future, residents are encouraged to do as much of it as they can electronically.

“That would be a help,” Maley said. “Everybody’s over there, but it’s pretty tight.”