Patrolman Ryan Dubiel, 31, faces two charges of simple assault in a pepper-spraying incident of borough residents. Dubiel had already been on administrative duty after a December 2019 shooting incident.

Woodlynne Patrolman Ryan Dubiel has been charged with two counts of simple assault for a June 4 incident in which he allegedly pepper-sprayed two Woodlynne residents without cause.

Dubiel, 31, of Wenonah, had already been suspended by the borough last Friday after video footage surfaced of him allegedly unloading Oleoresin Capsicum (OC) spray on two residents.

In the video, Dubiel’s partner, Officer Tirik Clouden, can be seen asking the residents for their names. When they ask why they need to provide them, Clouden says it’s so he can document the encounter.

Dubiel can be heard telling one of the residents, “Put the phone down. I’m not having you text people to come up here.”

When the residents object, Dubiel can be heard seemingly trying to bait them into an encounter, saying, “What are you gonna do?” repeatedly. Finally, he orders one of them, “Put your hands behind your back,” before spraying them.

“You guys wanna play games, right?” Dubiel is heard to say, spraying the residents on their porch, and pursuing one with the pepper-spray as he flees the block, at which point Dubiel yells, “Bitch” after him, and radios in that he has a group of people “failing to disperse.”

At the time Dubiel employed the spray, the residents “were not observed physically resisting or attempting to harm others or themselves,” as per the officer’s body camera footage, the Camden County Prosecutor’s Office (CCPO) said in a statement. 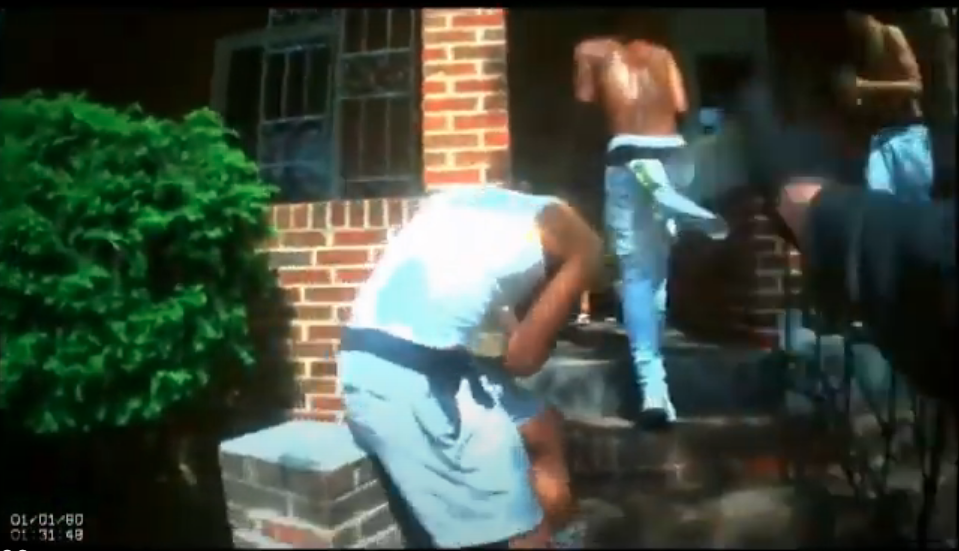 “After careful review, it was clear Dubiel’s actions are not consistent with the State of New Jersey use-of-force policy,” said Acting Camden County Prosecutor Jill S. Mayer in a statement.

“It was Dubiel’s use of OC spray against two of those individuals that led to the charges being filed against him,” the CCPO said in a statement. “Under the current Use of Force protocols, a police officer is permitted to use force when a subject refuses to comply with an officer’s commands at the time of arrest, or when the subject threatens the officer’s safety.”

Woodlynne Mayor Joseph Chukwueke said his office will comment on the case Friday.

Dubiel has been suspended without pay since June 5. Woodlynne is the ninth department in which he has worked.

A Woodlynne Police officer has been suspended without pay after an incident in which he allegedly pepper-sprayed a handful of borough residents without provocation Thursday.

In a video posted on a Woodlynne community website, Patrolman Ryan Dubiel, 31, is seen to be speaking with a group of young men in the 200 block of Parker Avenue June 4. He is accompanied by a partner, Officer Tirik Clouden.

In the middle of their conversation, and seemingly apropos of nothing, Dubiel suddenly un-holsters his pepper spray and blasts one of them in the face.

Later footage shows Dubiel and other supporting officers from nearby Haddon Township, Oaklyn, and Collingswood washing another man off with a garden hose while in handcuffs.

That was 20-year-old Derrick Swinney, who was subsequently treated by emergency medical personnel, and cited by Dubiel for disorderly conduct and underage possession of tobacco before being released.

Camden County Prosecutor’s Office (CCPO) Spokesperson Colby Gallagher said her agency has received multiple complaints about the incident, and that a special prosecutorial team is investigating it. On Friday, Woodlynne authorities retrieved Dubiel’s badge, gun, and uniform pending the results of the investigation.

“From what you just saw, it isn’t right, and it’s unprovoked,” Chukwueke said. “Using that pepper spray unprovoked, I don’t know what he was thinking.

The tiny borough, just 12 blocks long and four blocks wide, has a police department of only nine officers, the highest-ranking of whom, John Robinson, was recently certified as lieutenant.

That’s because the community broke from a shared services agreement with neighboring Collingswood in September 2010 to re-establish its own department, according to NJ.com. Former Camden City Police Chief Ed Figueroa is its civilian director of public safety.

In the decade since the Woodlynne Police Department has been re-established, Figueroa said only one officer has been fired from the job. He denied that Dubiel’s conduct was emblematic of any greater issue with the force.

“You can’t paint all the officers of Woodlynne with the same brush,” Figueroa said. “Every once in a while you have an aberration, and unfortunately that has happened. 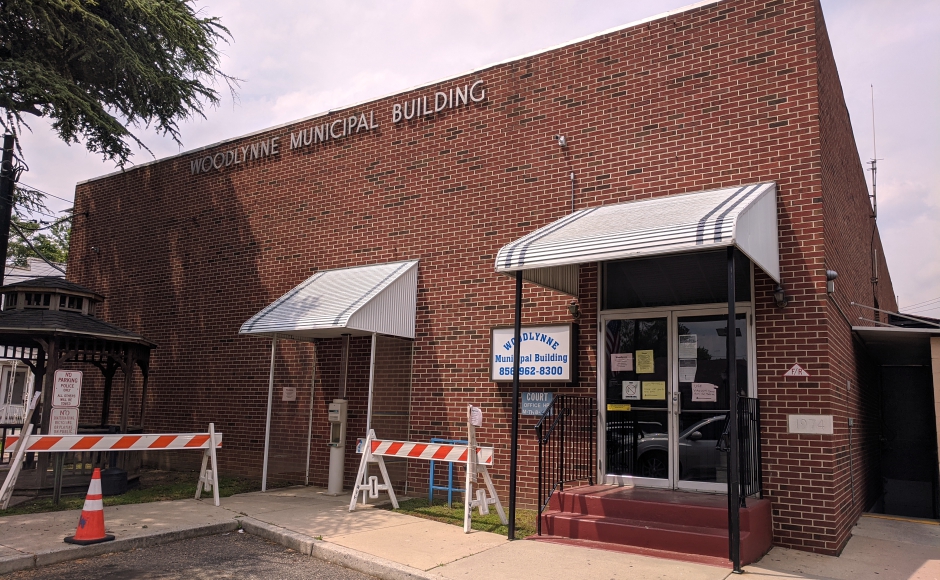 Figueroa said that Dubiel’s resume included “outstanding recommendations” from prior supervisors in the Wenonah Police Department, which disbanded in 2018.

Dubiel’s career also included two-and-a-half years with the Camden Metro Police Department, which in 2015 issued Dubiel an award of valor for stopping an assault on a woman in New York City while he was off-duty.

According to the NJ.com Force Report, Dubiel’s service record with Camden Metro notes 15 use-of-force incidents, 60 percent of which resulted in suspects being injured.

Dubiel has only worked in Woodlynne for 10 months, and has spent six of those on administrative duty after shooting a suspect fleeing the scene of a gas station robbery in December 2019. All officer-involved shootings are investigated by the CCPO, and that incident is still under investigation.

Dubiel was only pressed into patrol duty recently, when the ranks of the nine-officer Woodlynne department were temporarily thinned due to the novel coronavirus (COVID-19), Figueroa said.

But Woodlynne Councilman Clyde Cook, who opposed Chukwueke in the November 2019 election, said he believes the incident reflects a larger disconnect between the community and its law enforcement.

“The relationship between the cops and our teenagers is just not there,” Cook said.

“It was very surprising to me that the situation transpired the way that it did yesterday,” Cook said. “I’m happy that it didn’t get worse.”

Cook is also awaiting the results of an investigation into a confrontation he had with borough police in February, which has been put on hold due to the COVID-19 pandemic.

He alleges that two Woodlynne officers forced their way into his home, one with a deactivated body camera, and scuffled with members of his family, resulting in charges for himself and his son, whose entry into the U.S. Marine Corps has been delayed as a result.

Cook claims that the incident was retaliation for his criticisms of the borough government; Chukwueke said the matter is still under investigation.

The mayor believes Dubiel’s case is an isolated matter, and does not reflect any larger concerns with the department. 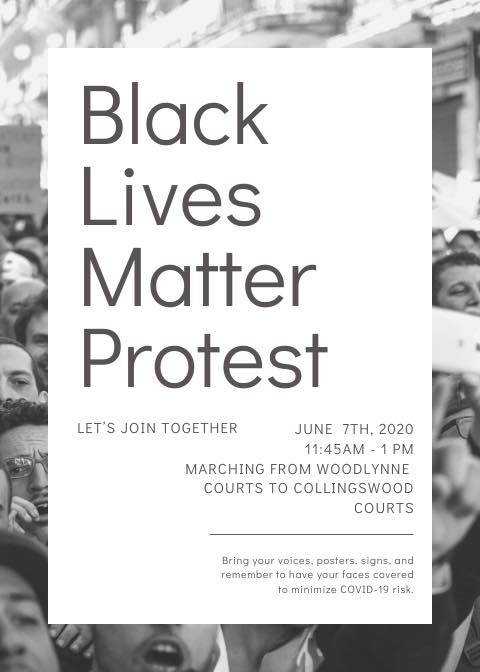 “What happened yesterday was outrageous,” Chukwueke said. “[But]  they say that you don’t throw the baby away with the bath water.

“We took all the correct steps to get this thing investigated according to the attorney general and the prosecutor’s office,” the mayor said.

“We want to take action to ensure that residents have confidence in the Woodlynne Police Department.”

Chukwueke said he will march as planned with residents in Sunday’s community-organized Black Lives Matter demonstration.

“We’re trying to see what we can do to move things forward,” he said.

“There’s just this evil going around,” Chukwueke said. “We will overcome.”