After taking in Bruce Springsteen at Citizens Bank Park, Collingswood resident Jim Angehr marvels at the longevity of both The Boss and his music. 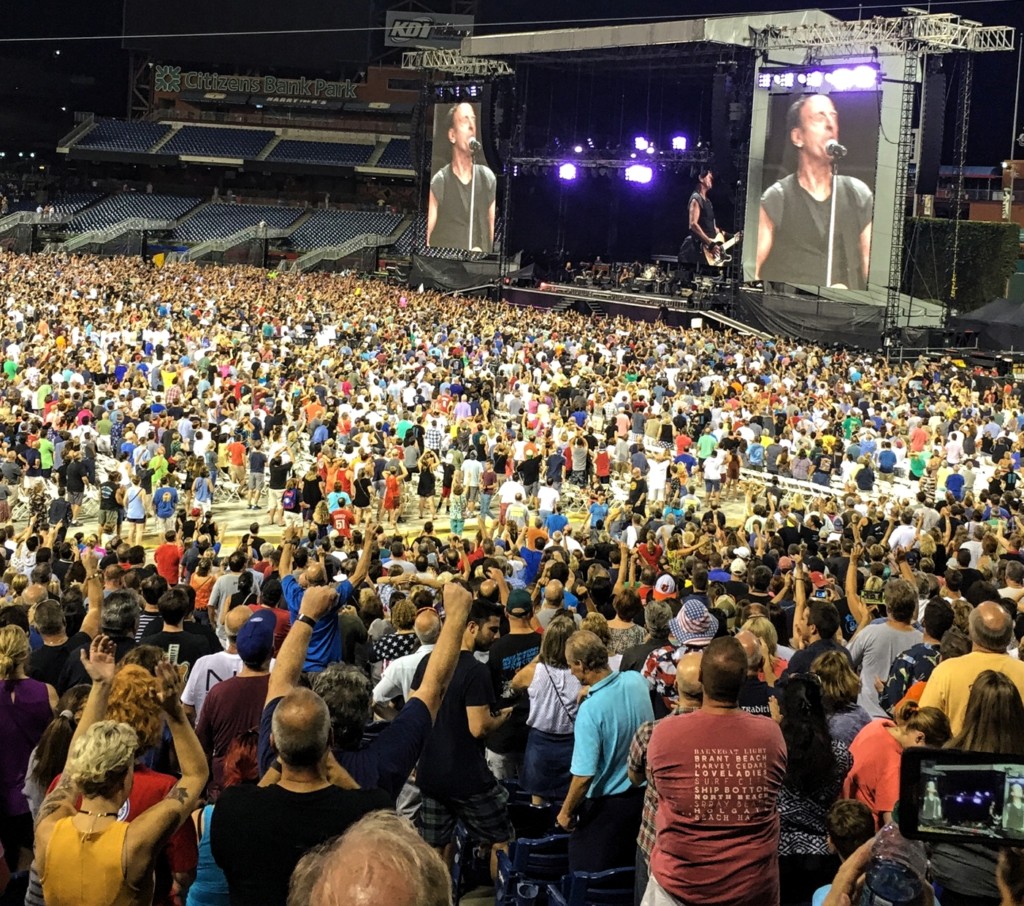 I was there! The Jersey native was finishing up what had been billed as The River Tour 2016, which commemorated his landmark 1980 album of the same name.

Two shows based upon a 36-year-old album and performed by a 66-year-old man.

It might be fair to ask whether the audience was mostly nostalgia-seekers, showing up for familiar songs and the sturdy musicianship for which the band is known.

It might be a fair question, but it’s the wrong one to ask—if only because Bruce Springsteen is the only “legacy” rock-and-roll star who performs in grateful recognition of time rather than angry ignorance of it.

Consider The Rolling Stones. Mick and Keef may have created the second-greatest musical body of work of the 1960’s (hello, John and Paul). But in the 21st century, their songs about youthfulness and rebellion require the willing suspension of disbelief. When the Stones play a tune like “Brown Sugar” today, you can only enjoy it by forgetting either that the singer is old or that the audience is young.

Nostalgia is our safe word.

Consider The Who, a band that has matured with appreciably more grace than The Stones. As early as the 1970’s, Pete Townsend claimed that he hated his own lyric, “Hope I die before I get old.” But he and Roger Daltrey continue to perform it. I’ve seen The Who recently perform “My Generation,” and no one in the audience quite knows what to do with that line.

We’re old, they’re older, and we love the song, but you can’t get away with singing “Hope I die before I get old” without resorting to some level of scorn. Misanthropy was never far from the center of Townsend’s songwriting, so I can just barely accept shouting along to “My Generation” on those terms. Still, “My Generation” becomes its own joke, albeit a mean one.

Again, nostalgia is our safety net.

But then there’s Springsteen’s “Rosalita,” an early anthem composed less than a decade after “My Generation” (and to which fans were treated during both Philadelphia shows.) In the lusty original, from 1973’s The Wild, The Innocent, & the E Street Shuffle, Bruce remarks both to Rosalita and to his audience, “Someday we’ll look back on this/and it will all seem funny.”

The difference between that line and “Hope I die before I get old” shows why calling 2016 Springsteen a nostalgia act misses the point: with Bruce, it’s always been about nostalgia anyway—but we like it.

Not insignificantly, Springsteen is younger than John and Paul, Mick and Keith, and Pete and Roger. If the rock-and-roll titans of the 1950’s were Greece and Rome, and the British Invasion was the Renaissance, Bruce is a one-man Baroque. (Everything afterwards is Rococo at best.)

It feels inevitable merely in retrospect, but only a rocker Springsteen’s age would have been young enough to treat rock-and-roll mythology as not-dead-yet metaphors––he’d seen Elvis on Ed Sullivan as a child, after all––but old enough to catch The Beatles on Sullivan too.

Beginning with his first album, Greetings from Asbury Park, NJ, Springsteen made music that approached rock from the perspective of conversation instead of discovery. Call Bruce astute or lucky, but his unique position in time enabled his early music to grow and breathe in a way that others before didn’t, and albums after won’t. When the crowds at Citizens Bank Park roared along to the lyric “Someday we’ll look back on this/and it will all seem funny,” it was surely a joke. But it wasn’t on us, and it wasn’t on the Bruce and the band, either.

At his Philadelphia shows, even in the midst of a putative River tour, Bruce heavily featured tracks from his first two albums for each of the first couple hours.

Complete with a violin section dedicated to just a single song, both nights commenced with the ten-minute “New York City Serenade,” from The Wild and Innocent.

Standard performance logic may hold that such an opening move is better suited for a small hall than a huge stadium, but the sincerity of Springsteen’s performance instilled its own intimacy by force of will.

From there, we heard early stompers (“It’s Hard to be a Saint in the City”), ballads (“Fourth of July, Asbury Park/Sandy”), and swingers (“Kitty’s Back”), but the emotional center of the main set September 7 was the Bernstein-esque “Incident of 57th Street.” It’s a melancholy tale of doomed love, the romance of which deepens its tragedy, and vice versa.

Like “New York City Serenade,” “Incident” is long enough song to afford many small, writerly details along the way; at one point, as the protagonists spin away from each other, Springsteen sings, “Upstairs the band was playing/and the singer was singing something about going home.” Like any great author, Springsteen the lyricist knows when exactly when not to be descriptive. What was the band playing, and what was the singer singing?

Here’s some nostalgia for you: I’ve listened to “Incident of 57th Street” for about 25 years, first when I asked my brother-in-law to record his vinyl copy of The Wild and Innocent onto a cassette (the other side of which contained Greetings From Asbury Park.) 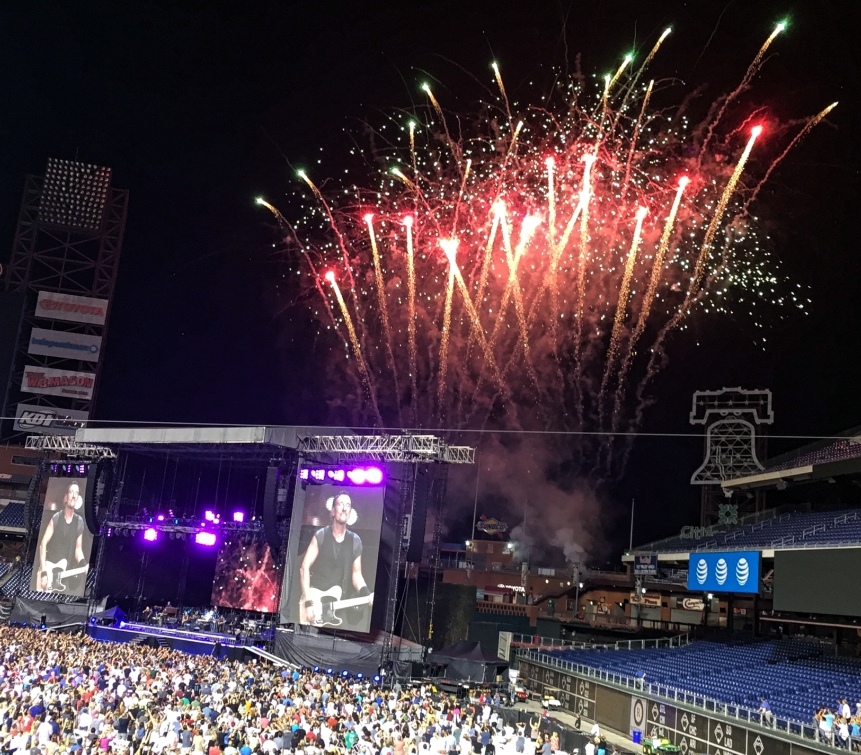 As the muses would have it, my high school was about a 40-minute drive from home; perfect LP length.

Throughout my sophomore year—much to the dismay of my younger brother who rode with me, and to my friends, who disdained everything not on the Sub Pop label—the trip to class was long enough to listen to Bruce’s first album in its entirety, and the trip home featured his second.

On the drive back, I’d hit the corner of West Esplanade Avenue and Vintage Drive just as Springsteen would croon, “Upstairs the band was playing/and the singer was singing something about going home.” At the time, I was usually antsy for Bruce to get to his epic, guitar-god solo.

It wasn’t until the Philadelphia shows that I understood that line. It wasn’t only one song that the band was playing and the singer singing, but all of them—and not just upstairs in the past. The song was all of these songs, right now. These were songs written with sufficient wisdom and performed with enough generosity that they welcomed time and fellow travelers.

The band was playing, the singer was singing, and it felt like home. In the present.