Trending
You are at:Home»Arts»‘Yarnstorm’ Drenches Benches, Fences in Collingswood

For a second year, local artists partnered with the borough to create a public display of homemade color. 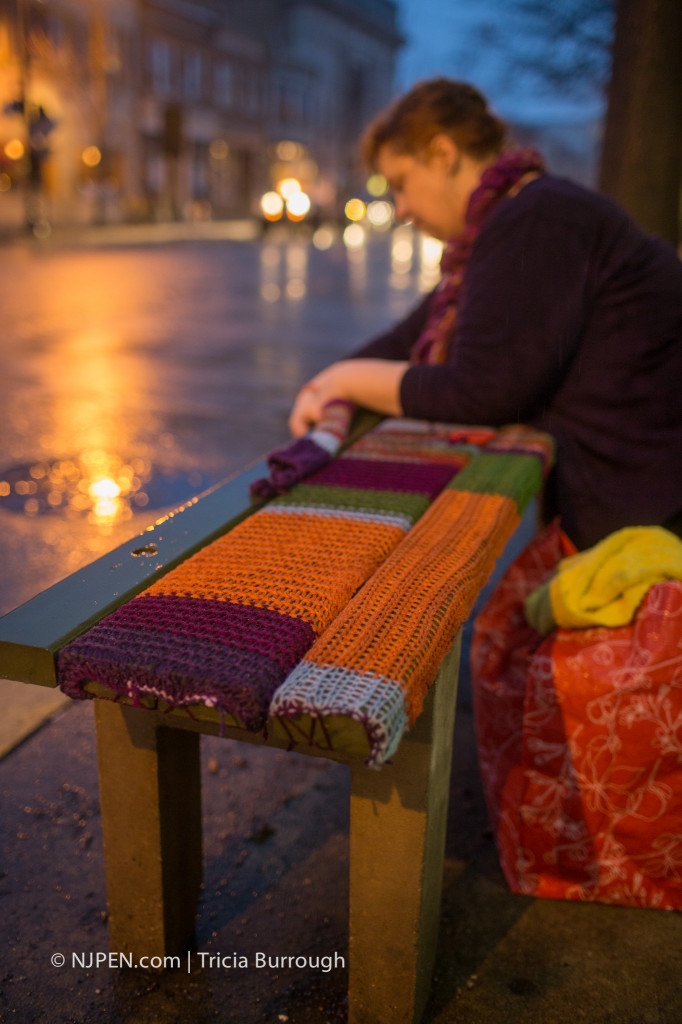 Like the spring rain that begets a field of flowers in bloom, Collingswood residents and visitors taking to the Haddon Avenue business district after last night’s downpour will see a street dappled with color.

Fiber artists in have hit the borough with an overnight “yarn-bombing,” adorning fences and benches along the main thoroughfare from Frazer to Woodlawn Avenues.

Although the term usually describes a guerrilla-style expression, the event is a collaboration among local knitters and the borough that’s in its second year, said Cassandra Duffey, Director of Community Development for Collingswood.

“Yarn-bomb 2014 was one of the most endlessly talked-about things,” Duffey said; “it elicited a strong reaction.

“We really liked the way people talked about it and spent time actually looking at it and discussing it,” she said.

“And we have a lot of knitters in town, which was something we found out after the first one. They spend a lot of time on these pieces.”

Crocheter (and NJ Pen contributor) Shannon McGill, one of a group of some 20 artists who participated in the project, said that she enjoys yarn bombing because it embraces “levity, humor, and democracy.

“Yarn bombing is art that isn’t pretentious or elitist,” she said. “It’s out there for everybody to see and comment on. It invites the whole community into the artistic process, either as artists, appreciators, or critics.” 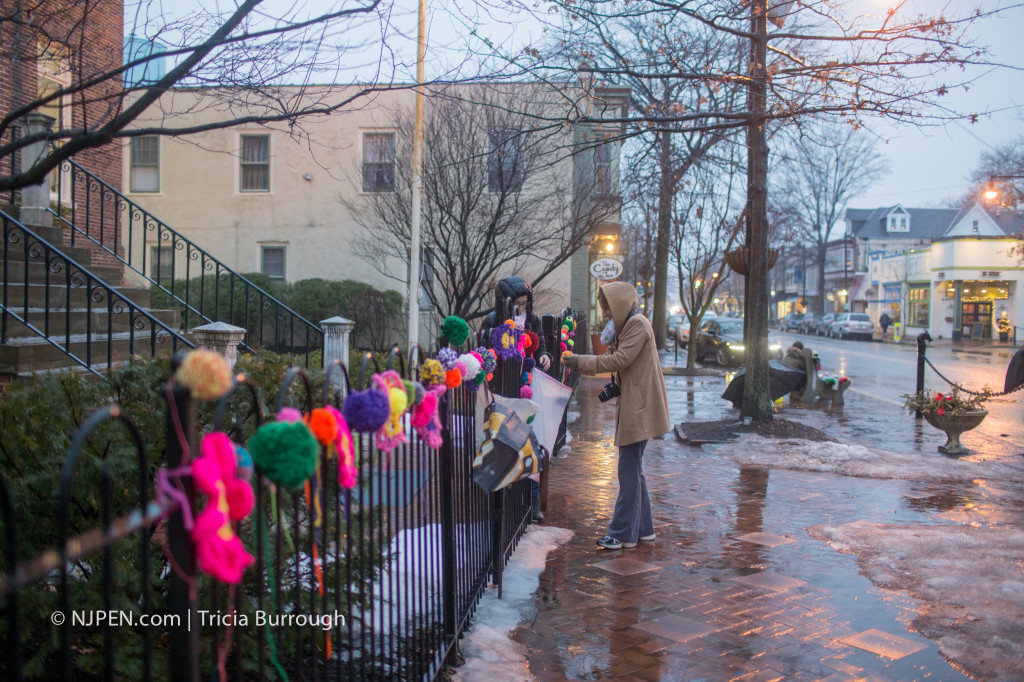 To McGill, the humor and levity of the practice stems from the unexpected appearance of yarn art in places that are “incongruent with the environment.

“It makes your brain move in a new way, and it makes you laugh,” she said; “[yarn bombing]shakes up your routine.

“It also wakes you up and reminds you to keep your eyes open to the world around you.”

Christina McLean, whose work adorns the bench in front of the Tortilla Press on Haddon Avenue, said that the installations are not “permanent, not destructive, not exclusive,” and are inexpensive labors of love.

“I am here for the universe’s divine work,” McLean said. “Life is art. Life is creation.” 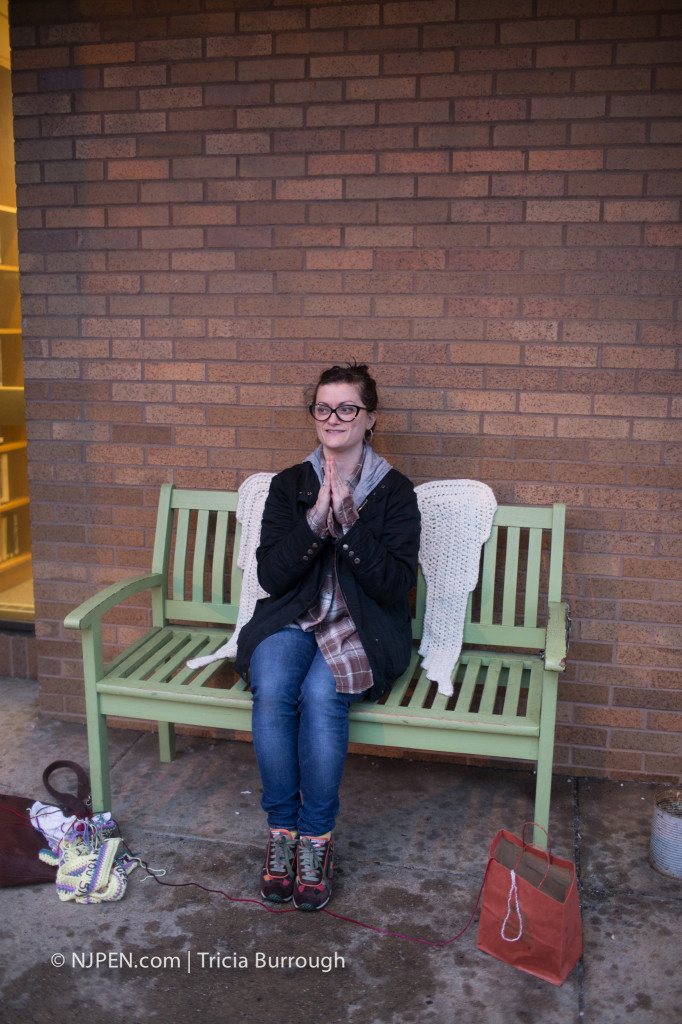 Elspeth Abel Slater, who stitched a multi-colored cover for the bench outside the Twin Oaks Thrift Shop at the corner of Haddon and Collings Avenues, said that the activity gave her “a chance to pick up my needles again after too-long a haitus, and also an opportunity to do something community-related with my knitting/crocheting friends.”

“I see it as a burst of color to brighten up the day after the dreariness of winter,” Slater said, “and there’s always room for whimsy, in my book.”

In addition to offering an outlet for their creative impulses, the knitters who participated in the yarn-bombing all spoke of how the event gave them a chance to be involved in their community.

For Duffey, the human capital of the borough is one of the greatest features of life in Collingswood.

“These pieces might not be great commentaries on society, but they might make you think about what these artists brought to the downtown,” she said. “They want to make Collingswood a better place.”

“There are so many amazing people living in this small town,” Slater said. “For me, they make Collingswood the incredible place it is: creative, smart, funny, community-minded, generous.”

McGill said that her piece—a set of angel wings stitched to the bench outside the public library—is an opportunity to warm passersby with a moment of reflection. 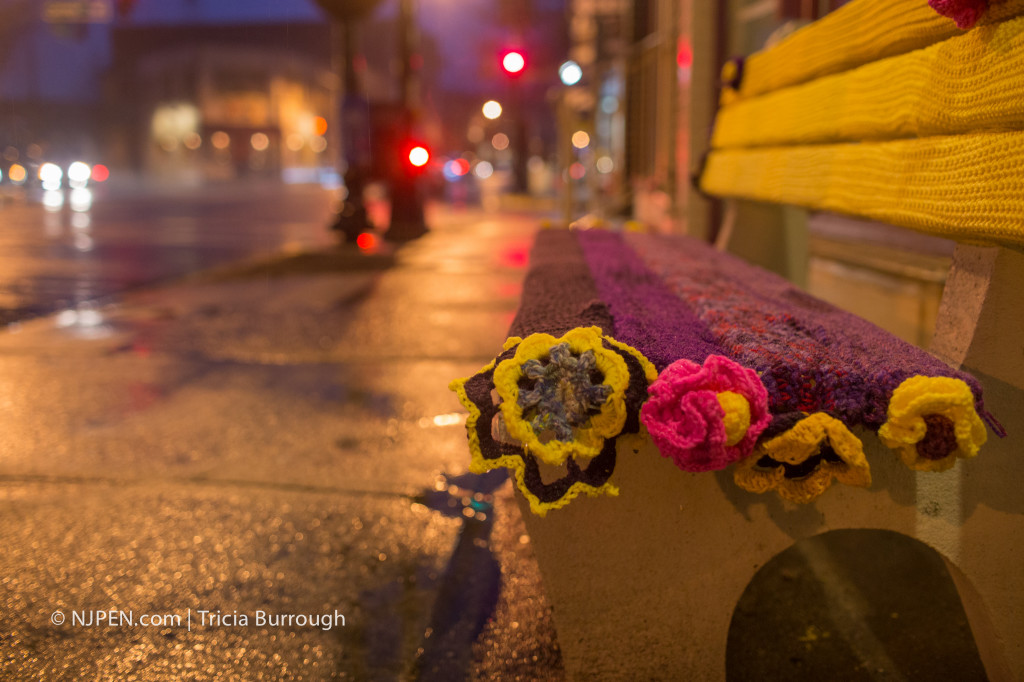 “I want it to make my neighbors feel that the world is a safe and cozy place, to cheer them up after this long, cold winter,” she said.

“To me, the larger part of art is doing,” McGill said. “Every person alive has the capacity to create for art, but I think many people see it as some lofty endeavor and get paralyzed with fear. Forget it.

“That’s one of the things the yarn bombing proves: making and displaying art is so easy,” she said. “You just have to give yourself the time and space to do it.

“Since I’ve moved here, I feel like I’ve had so many opportunities to be creative in a lot of different ways,” McGill said. “That’s what makes this such a healthy, happy community. We nurture each other’s inner artists here.”