Trending
You are at:Home»Government»Norcross Kicks Off U.S. Congressional Re-Election Bid in Collingswood

New Jersey’s first district incumbent frames the Congressional midterm elections as ‘Donald v. Donald,’ as he seeks to ride back to D.C. on the blue wave that installed Phil Murphy in Trenton. 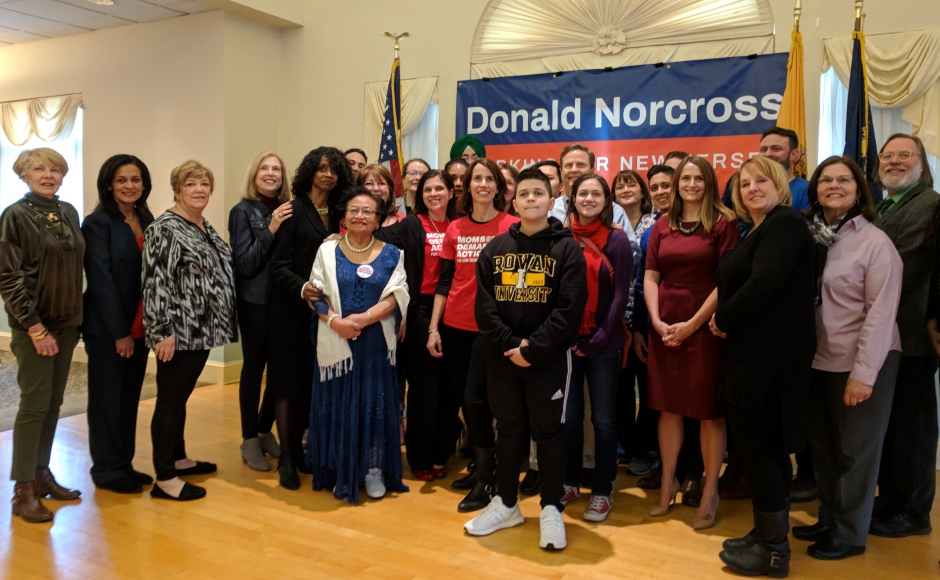 U.S. Congressman Donald Norcross (D, NJ-01) kicked off his re-election campaign in Collingswood Monday with a rally in the borough community center.

Under the slogan “Working for New Jersey,” and flanked by a multi-ethnic gallery of friends, family, and supporters, Norcross sought to distinguish his policies from those of national Republicans in a fight he framed as “Donald versus Donald; good versus evil.”

“When we see what is going on, it is literally that fight taking place,” Norcross said.

Norcross positioned himself as a staunch opponent of the Trump administration on as many fronts as he could muster in an hourlong program.

He attacked Republican economic policy as “a trillion-and-a-half-dollar tax scam” that benefits the wealthiest 0.05 percent of Americans. Combined with the capping of SALT tax deductions and the withdrawal of federal funding for the Hudson Tunnel, Trump is “apparently forgetting what New Jersey means to this great country,” Norcross said.

“He’s been quiet up-front about his intentions,” Norcross said. “He’s going to try to hurt those he perceives as voting against him.”

Norcross accused the president of “using humans as the negotiating point” in immigration reform talks, and picked at the “very fine people on both sides” remarks Trump issued after the Charlottesville, Virginia protests.

He worried that until protections are secured for Dreamers, people like his own daughter-in-law, a naturalized citizen and U.S. Army servicewoman, are at risk.

He spoke about defending the rights of workers while tightening up gun laws.

“I’m running for everybody who calls the first district home,” Norcross said. 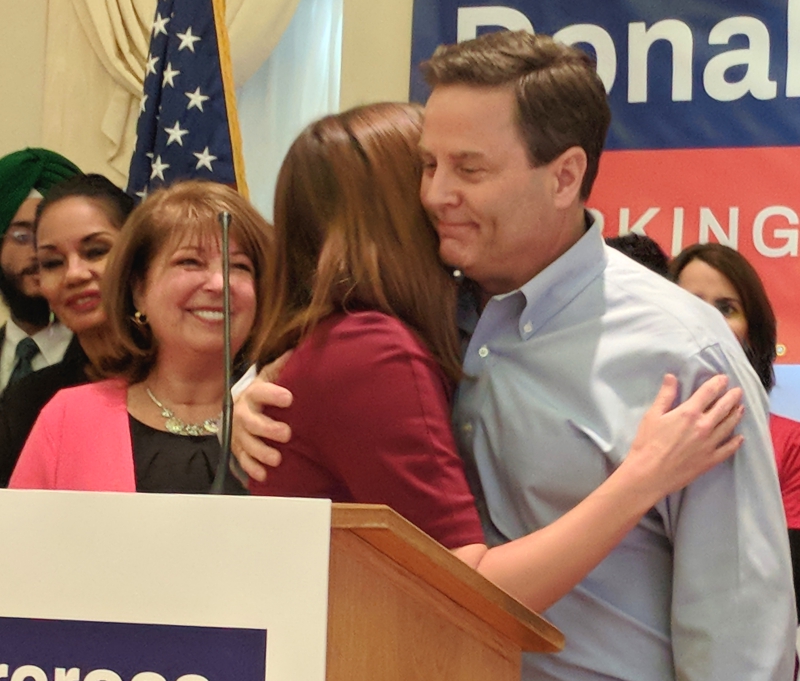 Norcross was introduced by his daughter, Corey, a labor attorney with the Philadelphia firm of Stradley, Ronon, Stevens, and Young.

In her remarks, Corey Norcross cited the volatility of national politics as the motivation in stumping for her father.

The support her parents offered when she told them she is gay “gives me comfort that my dad has been, and will continue to be, my ally in that fight for equal rights,” Corey Norcross said.

“If the last couple of years have taught us anything, it’s that supporting from the sidelines is no longer an option,” she said.

Corey Norcross cited her own gender-neutral name as her parents’ acknowledgment of gender-based pay gaps; she said they did it “so your employer could not judge you on sex before you walked through the door.”

“There is no better advocate for workers than one of our own,” Brennan said. 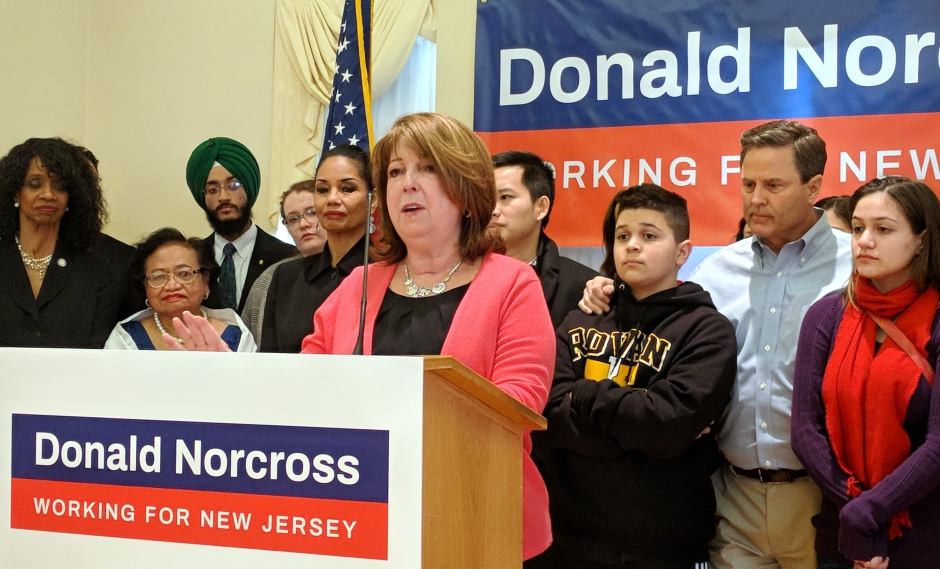 Loretta Winters, president of the Gloucester County NAACP, offered a personal endorsement for Norcross as someone who “stepped up and stepped out to be an advocate for women’s rights.

“The national NAACP office, who doesn’t know Congressman Norcross from a man standing on the street corner, gives him a grade of ‘A’ on his voting record,” Winters said.

Khai Tran, founder of the nonprofit Camden City startup Waterfront Ventures, described Norcross as “a leader who is actively fighting the Trump administration.

“Being a resident and student in Camden, I have trust issues when it comes to politics,” Tran said. “I volunteered to speak today to support a leader that I believe actually cares about me, and my community, and works with me and for me.” 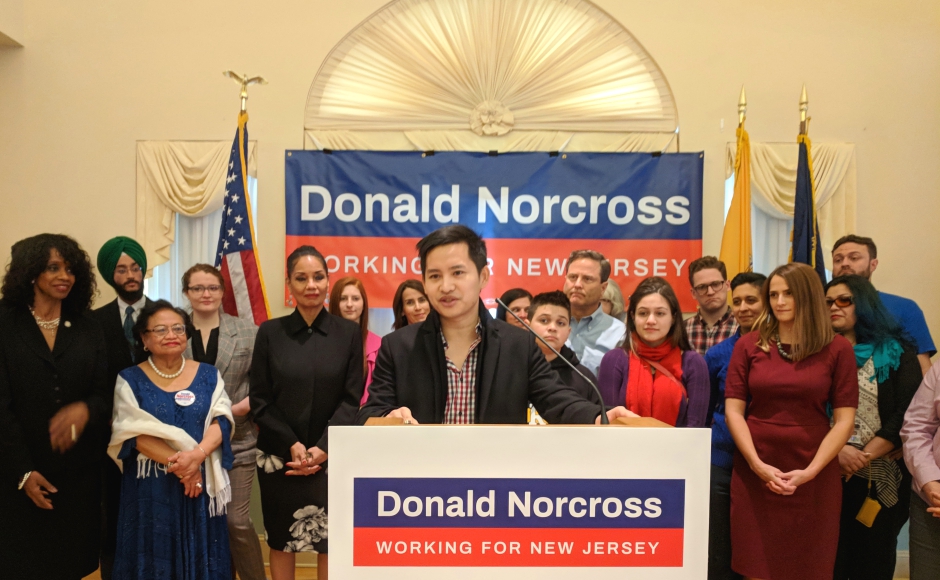 Norcross said the midterm elections offer an opportunity for Democrats to take back seats in Congress, and cited the Virginia and New Jersey gubernatorial elections as tremors in a groundswell of backlash.

“Diversity is our strength, and compassion the values that we hold so dear,” he said.

“We can be compassionate, and we can be fair, and a champion for everybody who wants to call America home.”

Republicans have not yet announced a candidate for New Jersey’s first district Congressional seat.