Actor Brian Stokes Mitchell, who originated the role of Coalhouse Walker, Jr. in the musical Ragtime visited with the high-school cast, crew, and orchestra to discuss the themes of the play. 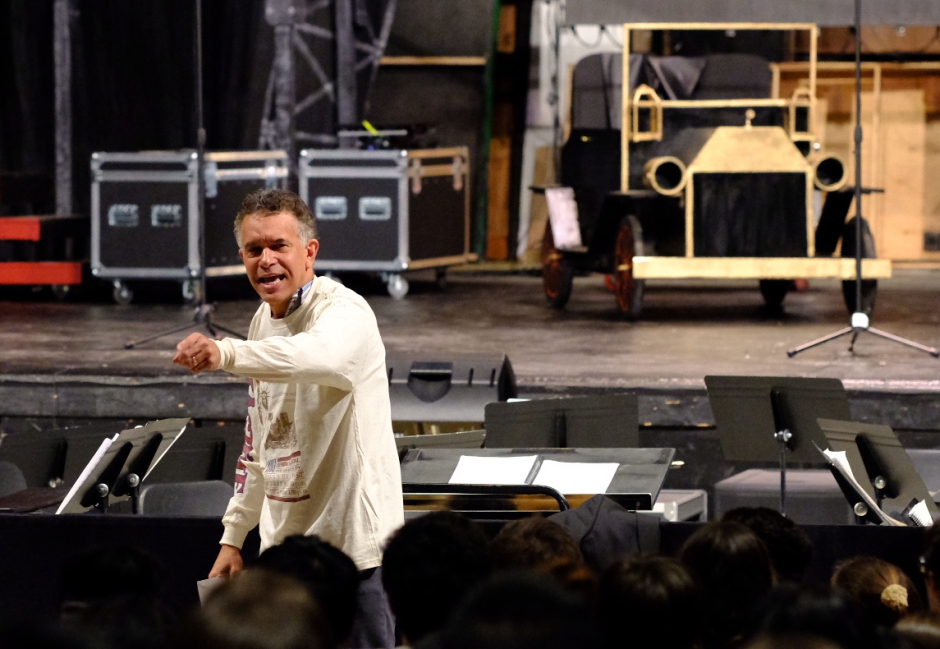 For the past few months, students at Cherry Hill East worried that their spring production of the musical Ragtime would be sanitized or shelved altogether for the content of some of its racially charged lyrics.

But on Friday, the cast, crew, and orchestra performed a very special preview number for an audience of one: Brian Stokes Mitchell.

The Broadway actor, who originated the lead role of Coalhouse Walker, Jr. in the show’s 1996 debut, had traveled to the school to host an educational forum with the students as part of an offer to help them tackle the tough subject matter of Ragtime.

When Mitchell first entered the auditorium, the kids were waiting for him, lining the stage to sing a full production number from the play, said Cherry Hill Schools Public Information Officer Barbara Wilson.

“He stood in the center aisle with his arms on his hips, listening,” she said. “When it was over, he applauded and told them it was beautiful. He said, ‘I go by Stokes, and we’re all friends here, so you get to call me Stokes.'”

Locally, the controversy around the production has focused on the racial and ethnic slurs in its book, which are spoken by antagonists in the show. But Mitchell reminded the students “there’s more issues than language and epithets” in theater.

“I had the advantage of seeing the script first,” he said. “It wasn’t a question for me. I knew there would be issues. But as long as people are talking, there’s a good thing.” 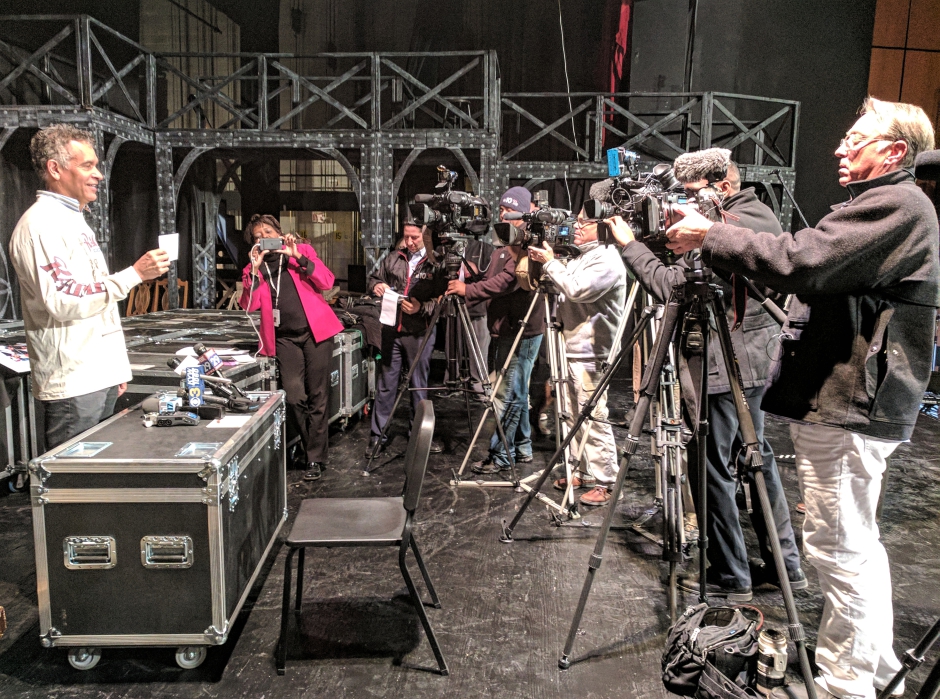 Afterwards, in an interview with reporters, Mitchell added, “the ugly language in the show is meant to be ugly.

“What makes me feel good is that the community is uncomfortable for the language that’s in this show,” he said.

“The audience is supposed to fall in love with Coalhouse and Sarah, and when that language is used against them, it allows the audience to gasp.

Mitchell directed other of his remarks to the way the school and public community have objected to the issues of bias and discrimination documented in the play.

“The world has lost a lot of empathy,” he said. “This is a community that is a great example of people working out problems and differences and the issues they have by discussing them.

“I’m heartened by the fact that so much discussion is going on in this community,” Mitchell said. “People are talking about it and trying to communicate with each other. That’s what we need in the world right now.”

In his address to the students, Mitchell encouraged them to “say what’s upsetting” and to involve themselves in difficult discussions. 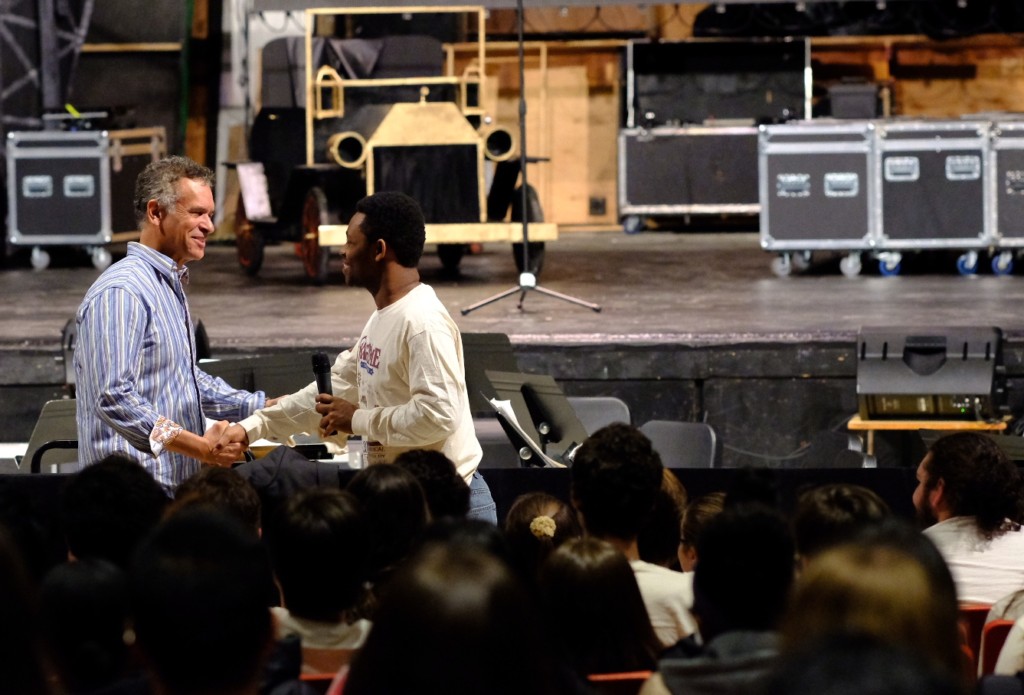 “Please don’t let it stop at Ragtime,” he said. “Please talk about it in your family, when you go to college, with your friends.

“Adopt that as part of who you want to be as a person on this planet. In the long run, it’s a really, really good thing to do.”

As a farewell, Mitchell sang “Make Them Hear You,” the final number sung by Coalhouse Walker, Jr. in the show, accompanied by a student pianist, and concluding to a standing ovation.

Mitchell acknowledged that the themes of Ragtime don’t exist in a vacuum, and that the specter of bias still hangs over even a community like Cherry Hill, which suffered a bomb scare at its Jewish Community Center as recently as Monday.

“This is not anything new,” he said. “It’s going to be around for a while. It’s in the fore now because of what’s going on politically in this country. This is not a post-racial society. That stuff is still going on.”

The response to such social turmoil, he said, is to produce art that offers an opportunity to confront those complicated emotions in a communal setting.

“You do a show like Ragtime,” Mitchell said. “You give them art to look at. You give them an experience that they can sit at together.” 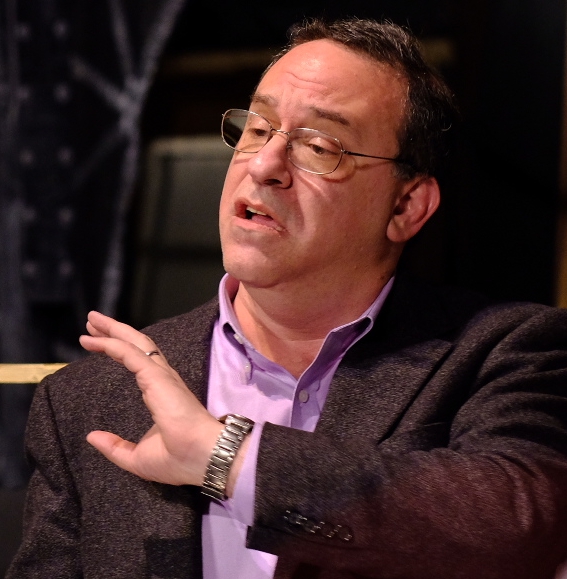 At the media reception, Howard Sherman of the Arts Integrity Initiative urged the reporters in attendance not to make the language of the show the focus of their coverage.

“The words in the play were carefully chosen,” Sherman said. “They exist in a context against the hate that shows these words.

“If you continue to make ‘the n-word’ the headline, you are doing a great disservice,” he said. “That really is the purpose of this show: to confront the hate that is inside [these characters].”

Wilson said the experience of Mitchell’s visit was an important piece of the education students needed around the show. She said the community objections to Ragtime‘s content have led to procedural changes that will allow the district to consider each of its future stage productions in the context of curricular goals.

Wilson added that the district was proud to offer its classroom as a safe space to consider and confront challenging material like race, class, and culture as depicted in Ragtime. In the coming weeks, every student in the high school will have one English and one history class covering the subject.

“It’s a definite opportunity for them to tackle difficult subjects,” Wilson said. “Our goal is to offer it as a curriculum piece.”