When Sgt. Michael Scardino and Ptl. Alex Cybulski resuscitated an unresponsive resident on April 1, they saved a life that they might not have been able to as little as a year ago. 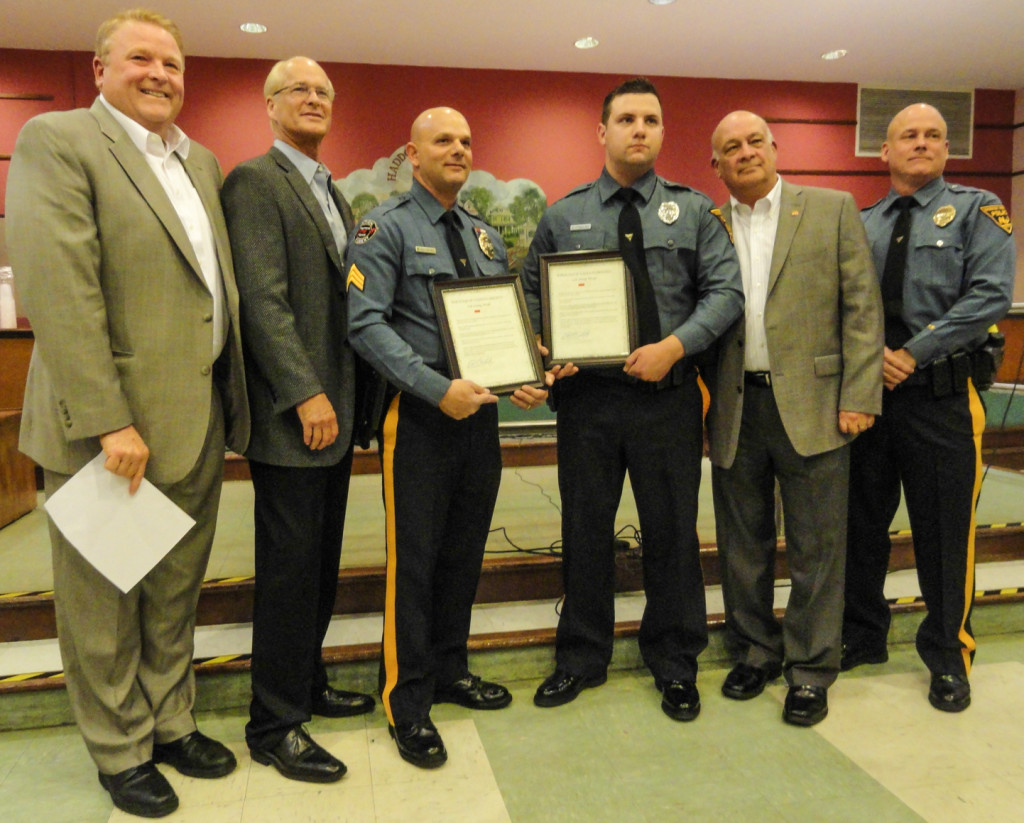 On Tuesday, the Haddon Heights borough council formally commended Sergeant Michael Scardino and Patrolman Alex Cybulski with life-saving medals for their April 1 revival of a Haddon Heights resident who had overdosed on heroin.

The officers were carrying narcan, the commercial name of the drug naloxone, which is designed to immediately counteract the depressant effects of opioids like heroin.

It was the first “save” in Haddon Heights since the enactment of the New Jersey Overdose Prevention Act in 2013, a combination Good Samaritan-naloxone law designed to accelerate emergency response in cases of heroin overdose without punishing the 9-1-1 caller.

For Haddon Heights Councilman Richard DiRenzo, the commendation was personally significant not only as a former police officer, but because it averted a tragedy to which his family is no stranger.

“A few years back we lost my nephew [to a heroin overdose],” DiRenzo said, “and it was tough because there was a kid in the car with him. If the kid had dialed 9-1-1, we had resources that could have saved him.”

“People need to open up their eyes,” the councilman said. “You can’t hide behind a wall anymore and say ‘Not my boy; not my girl.’ It’s here. Giving people our resources, it’s a big deal.” 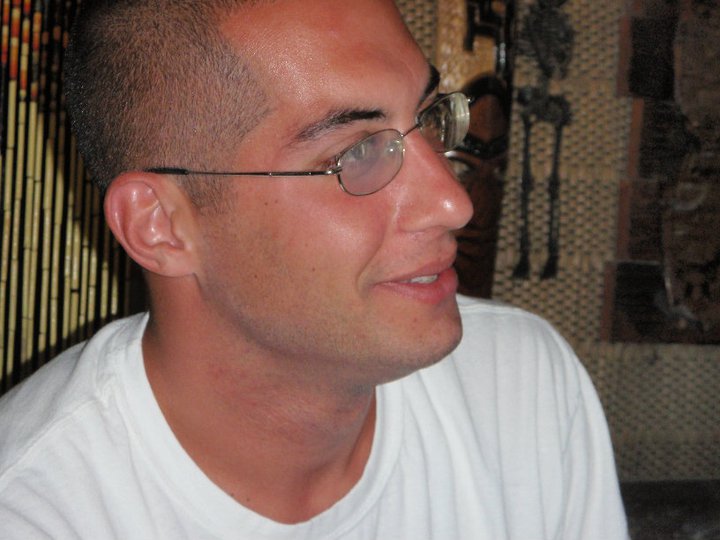 Salvatore Marchese before his death in 2010. Credit: Patty DiRenzo.

‘You have to keep them alive so they can get help’

DiRenzo’s nephew, Salvatore Marchese, was 26 when he overdosed in September 2010.

Grief-stricken, his mother Patty DiRenzo, who had dedicated herself to finding a recovery program for her son in his final months, turned to advocacy.

It was due in no small part to her efforts that the Overdose Prevention Act was signed into law, and that police in Camden County now respond to an overdose call with narcan along with their defibrillators.

“Users don’t use alone,” Patty DiRenzo said. “They always use with someone.”

She encourages not only officers and EMT’s but friends and family members of drug users–as well as addicts themselves–to carry narcan on their person, even if they’re in recovery.

“Those who are struggling, carry it,” she said. “You have to keep [users] alive so they can get help.”

As much as she praised police for developing appropriate overdose response protocols, Patty DiRenzo also condemned the social and political stigma that she said cost her son his life, and which continues to make heroin “a very quiet epidemic…a dirty epidemic that nobody wants to talk about.

“What other disease gets so many barriers in front of [patients]when they’re trying to get help?” she asked. “While my son was trying to get help for his disease, I was diagnosed with Stage IV progressive breast cancer—and I’m alive today and he’s not.

“Every door was open to me and my son didn’t get that,” Patty DiRenzo said. “We would sit there night after night, calling trying to get help, and he would look at me, defeated. He would look at me and say, ‘Nobody cares.’”

If her commitment to the cause seems courageous and just, it’s still no less fatiguing exhuming Sal’s memory as a cautionary tale.

“It takes parents who have lost their children to be the ones who fight,” Patty DiRenzo said. “It’s exhausting and it’s hard reliving my son’s story, sharing his story. We shouldn’t have to be the ones doing this.

“I know who my son was,” she said. “He was a good person. He had a disease. The stigma has to be lifted.” 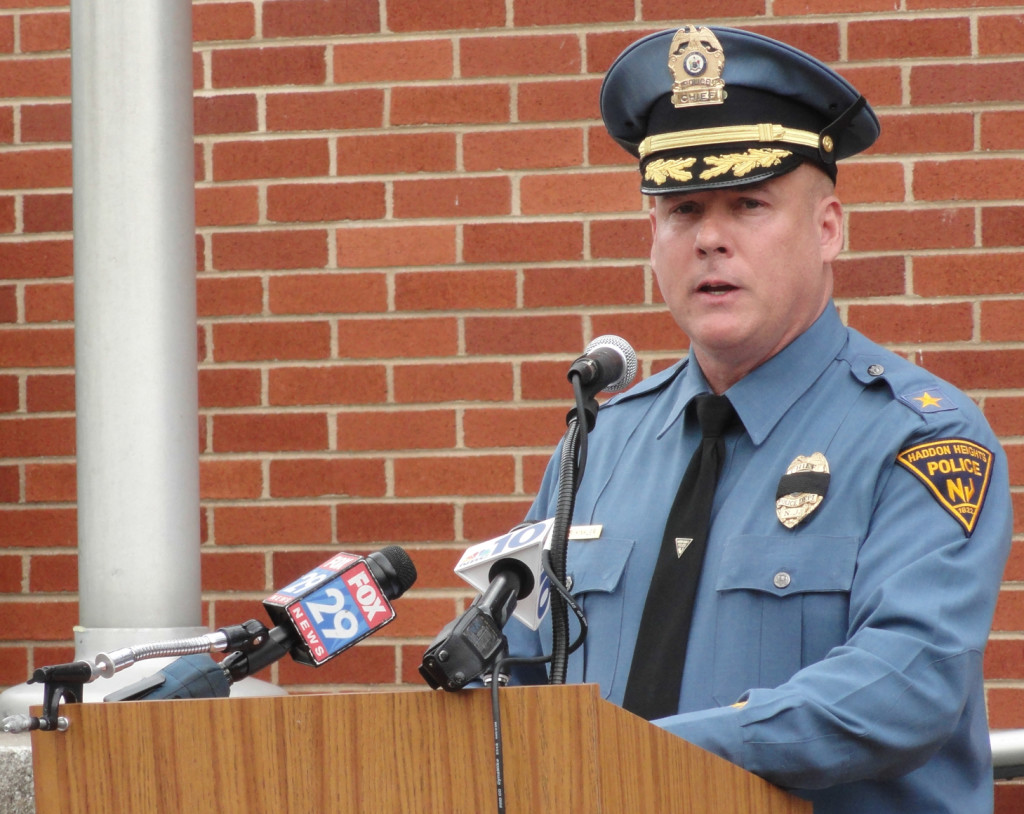 ‘If this is the war on drugs, we’re not doing a good job fighting it’

Haddon Heights Police Chief Richard Kinkler said that in addition to applying their training, Scardino and Cybulski were to be commended for their prompt treatment of a resident who was unconscious and unresponsive.

“It’s not by happenstance,” Kinkler said. “These guys all take their job very seriously. They take their training seriously. As police officers, you’ve got to be ready for a lot of things.”

Responding to the scene of an overdose looking to save a life instead of to charge a crime reflects the values of modern-day community policing, Kinkler said, especially when dealing with the addictions epidemic.

The call on April 1 came not from another drug user who was afraid of being caught, but from a mother who’d discovered her son unresponsive in the family home.

“Families who are afflicted by drugs, it’s almost like being hit with a tsunami,” Kinkler said. You don’t see it coming, and all of a sudden you’re overwhelmed by the addiction. She was really caught off-guard.”

“They’re a good family, but they’re afflicted by this addiction,” he said. “Just like any other addict, he’s a nice guy; he’s just caught up in it. My hope is that if he winds up in rehab, he can spend some more holidays with his family.”

Sadly, Kinkler said, Haddon Heights police arrested the very man whose life they’d saved for suspected drug possession within 24 hours, which the chief said, “isn’t typical, but indicative of how bad drug addiction is in our country.

“If this is the war on drugs, we’re not doing a good job fighting it,” Kinkler said. “The police are out there begging for help. It really is in epidemic proportion right now.” 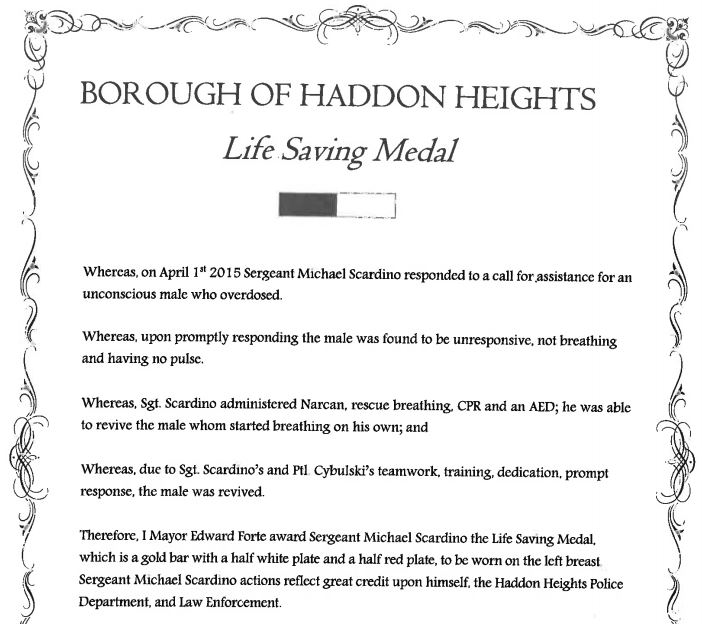 Kinkler said that law enforcement officials could use better resources at the institutional level, like a national database for opioid prescriptions, greater targeted interventions for at-risk youth, and a broader availability of recovery options closer to home.

A repeat offender locked up for drug possession multiple times doesn’t need “a sledgehammer” sentence, he said, but something that will get him or her into a rehabilitation program.

“The first question I’m asked is about rehab,” the chief said. “It’s always an issue getting long-term rehab. These are half-year programs.

“Some of the better ones have been in isolated areas, but unfortunately, if addiction strikes people who are supporting their families, you do need local rehab so they can be connected to their families, their kids,” Kinkler said.

“It’s a multi-faceted approach in general.”

Until such resources are brought online, Kinkler said, it takes grassroots efforts, like those led by Patty DiRenzo, to hold communities accountable for responding to the problem.

“We do need to do this at the local level, because a lot of this isn’t big drug dealers,” he said. “It’s the little guy: I go get my oxy’s and I sell them. The DEA’s not going to take that case, and the municipalities don’t have the resources to attack it.

“I give huge kudos to our task force, which we didn’t have for years, and she’s brought it back,” Kinkler said.

“[Patty DiRenzo] is a true hero. She’s done a great job, to channel her energy into this.”

Patty DiRenzo coordinates narcan administration trainings throughout South Jersey, at which the drug is provided along with rescue techniques. She recommended the following resources to anyone whose family may be facing opioid addiction.