The Philadelphia Flyers head coach talked about expectations from his club in a visit to Haddon Twp.

Hours before the Los Angeles Kings and New York Rangers were set to take the ice for Game Two of the 2014 Stanley Cup Final, Philadelphia Flyers Head Coach Craig Berube visited Haddon Township for an in-store appearance at Sports 4 All.

In between signing pucks and photographs for fans, the coach chatted about everything from hosting the upcoming NHL Entry Draft (June 27-28) to what the Flyers must do to make a deeper playoff push next season. 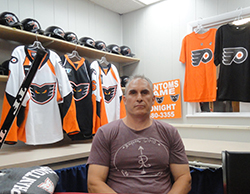 When Ron Hextall told the media “I like young players and I like draft picks,” in his inaugural press conference as Flyers general manager, it was a cue to fans that the franchise is looking to strengthen its farm system.

Berube expects the Flyers will be mining talent, not necessarily positional needs, at the draft. He stressed that the club is focusing on giving its prospects time to develop into NHL-ready players.

“We need to put our young guys in a position to succeed, whether it’s back in junior, in the minors,” Berube said. “If somebody comes in [to camp]that needs to make our hockey team, they’ll be there.”

The coach also said he could see the team trading for additional picks in what is expected to be a talent-laden draft.

“Any time you can get some assets for something, you’ve got to do it,” Berube said. “You’ve just got to make sure you’re not depleting your team too much.”

‘Mentally, we need to get tougher’

Those players who get an invitation to Flyers training camp should expect to be put through their paces. Berube promised that “training camp’s going to be hard,” and cited Philadelphia’s 3-8-0 start to the 2014 season as having handicapped the team for the rest of the year and into the postseason.

Playoff success comes not just from cultivating chemistry among a nucleus of skilled players, Berube said, but also from playing “a fast, aggressive game.”

“You see when you get a bad start how hard it is to climb out of it,” Berube said. “We’re going to push our guys to the limit in training camp to get them prepared.”

The coach said that in order for his players to sustain the level of aggression and speed necessary for a deep playoff run, “mentally, we need to get tougher.

“It’s a demanding town from the fans and the media and the ownership too,” Berube said. “A lot of times the average fan doesn’t understand the pressure that’s put on the player. If you want to play in this town you have to be able to handle it, and that’s why I talk about getting mentally stronger.”

Two of the team’s best players, goalie Steve Mason and forward Claude Giroux, both demonstrated that mental fortitude last year, and Berube expects them to build upon that success in the 2015 season.

“[Mason] came in the playoffs and proved something,” Berube said, “and I think he needs to feed off of that and make sure he’s ready to go.

“[Giroux] is a young captain still,” he said. “I think he made some huge strides in his game and his captaincy. He did a great job leading by example. His hard work and effort out there leads the way.”

As for his own place within the organization, Berube said that he found his first year as a bench boss to contain few surprises.

“I don’t think there’s anything I didn’t expect,” he said. “I really enjoyed it. I enjoy running the bench, running practices.”

In a conference where perennial contenders like the Pittsburgh Penguins and Washington Capitals have also turned over their front offices, Berube said he was likewise unfazed at the prospect of facing retooled rivals next season.

“Competition’s going to be good no matter what,” he said. “It’s a tough division.

“There’s a big demand in this city to win, and you’ve got to make sure that you’ve got to be successful here,” Berube said. “You know that there’s a lot of pressure.”