Trending
You are at:Home»People»Armored Combat League Turns Back the Clock, Dials up the Impact

The upstart fighting sport pits would-be knights in real suits of armor against one another in melee combat. In fewer than five years, it’s become a 400-member league with international reach. 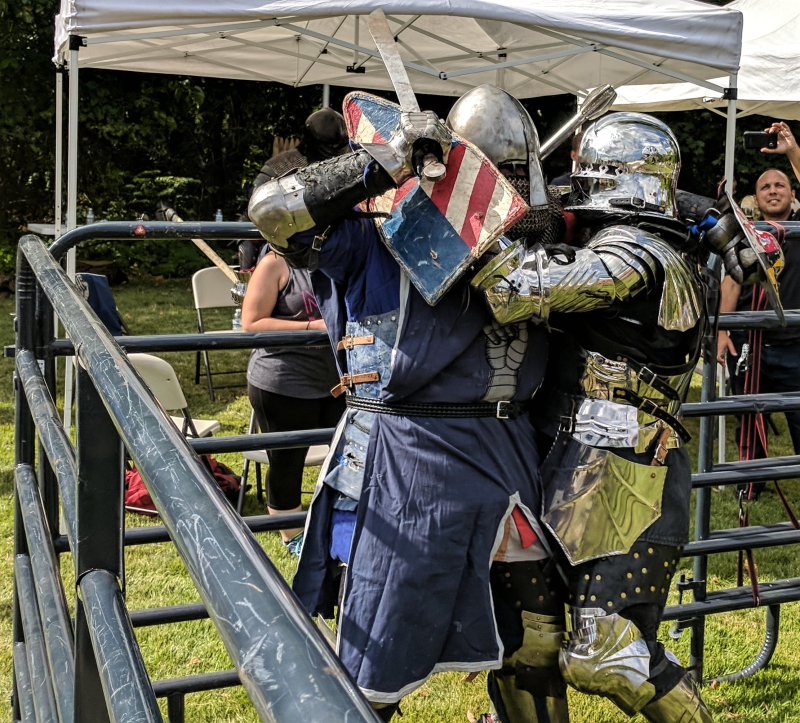 ACL co-founder Andre Sinou (right) clashes with a member of the Washington D.C. Juggernauts in a chapter match in Lindenwold. Credit: Matt Skoufalos.

It’s 85 degrees in the unseasonable October heat, and the clang of steel on steel is in the air at the Lindenwold Moose Lodge.

Framed in by a 20-by-20-foot steel livestock corral, members of the Philadelphia Rhinos are squaring off against their counterparts from the Washington, D.C. Juggernauts in a relatively friendly inter-chapter match.

The force of hundreds of pounds of armored men repeatedly slamming against the side of the portable fencing is almost too much for it to bear, as the bowing bars on one of its most frequently abused panels attests.

A couple dozen spectators, mostly family and friends, gawk and slug beers in the afternoon sun, alternately wincing and cheering with each strike.

Unlike those amusements, however, the ACL isn’t scripted; there’s no narrative to the fighters or the fight. It’s more a collection of men who will pant and heave and tussle in 50 pounds of leather and steel until they literally have knocked themselves unconscious in the effort. 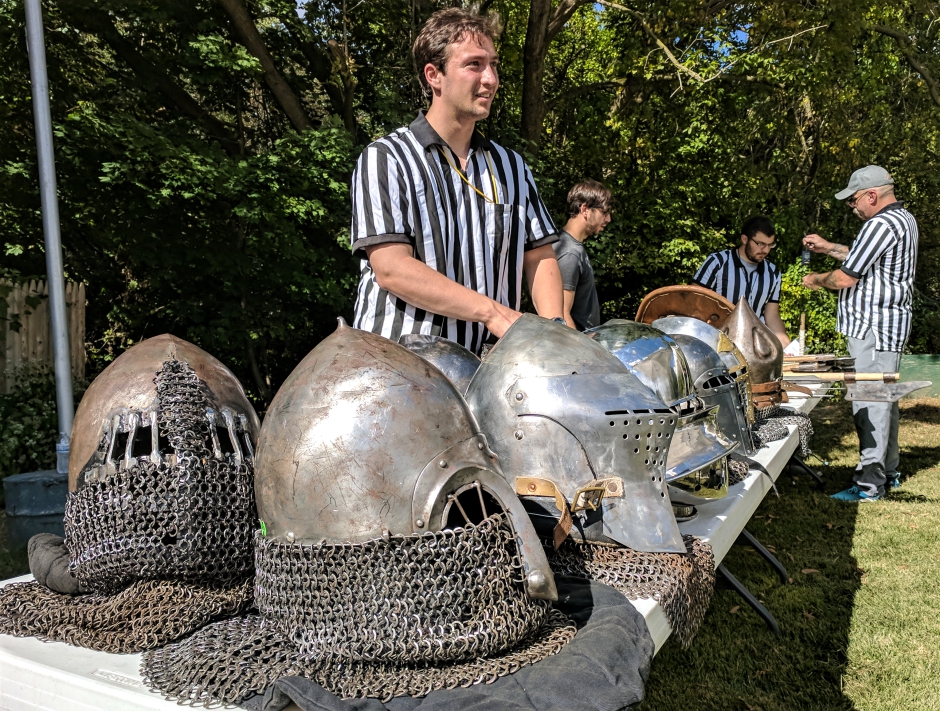 At weapons inspection, Rhinos chapter president Logan Greer, 22, of Glassboro, is wearing black-and-white officiating garb instead of one of his squad’s green and yellow tunic.

A systems engineer for Lockheed Martin, Greer has been sidelined since March with a triple knee injury (torn ACL, MCL, and meniscus) sustained in an ACL bout in Arizona.

Greer, who describes himself as a medieval history buff, caught his first taste of the Armored Combat League at the DREAM Park in Gloucester County.

The threshold for entry is low—league dues are just $50 annually—but the price of competition can be high. “Kits,” ACL slang for the elaborate, layered, period-accurate suits of armor worn by combatants, cost a few thousand dollars on the low end. They also have a finite lifespan, and after months of full-contact fighting, can deteriorate to the point of being useless.

“Eventually, you’re going to beat them up to a point where you can’t use them anymore, and they’re very expensive,” Greer said. 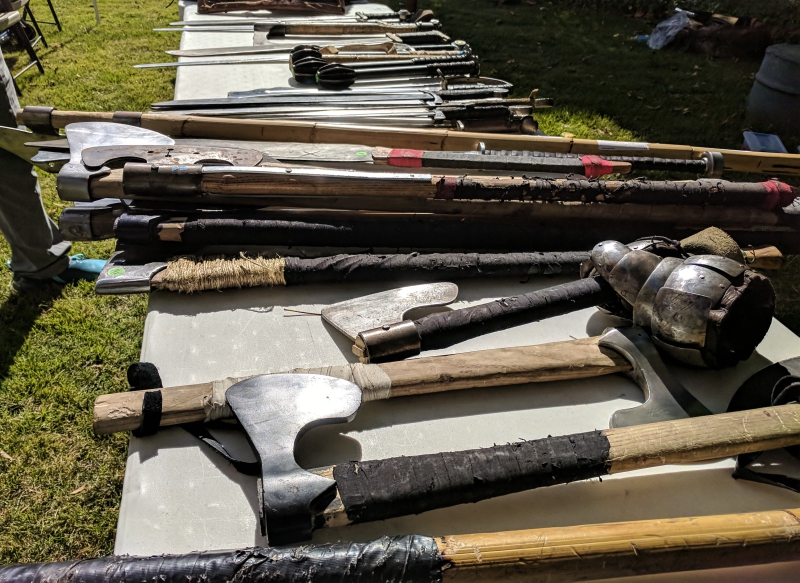 In the Armored Combat League, weapons must adhere to certain criteria, but that doesn’t mean they aren’t capable of dishing out damage. Credit: Matt Skoufalos.

Expensive or cheap, the armor’s got some heavy lifting to do, because fighters use blunted weapons that are equally brutal and swung with maximum force.

One-handed axes, polearms, maces, and swords are typical choices, as are bucklers and heaters, shields that are used alternately for defending blows or delivering them.

As Greer puts it, “You want to deliver enough blunt force to make somebody question if they want to be standing.”

That doesn’t mean anything goes. For example, hammers, which are designed to punch through armor, are forbidden. So are joint manipulations, thrusting blows, and shots targeting the feet, the backs of the knees, the back of the neck, or the vertical spine. All edged weapons are dulled, and anything that’s chipped can’t be used in combat.

The matches range from three-on-three melees up to tournaments of 16 vs. 16. A fighter is out when he has made three points of contact with the ground—two legs and a hand, for example.

If a side earns a three-on-one advantage, the fight is stopped automatically. A chapter bout, like Saturday’s  Rhinos-Juggernauts match, can span anywhere from 11 to 21 rounds. 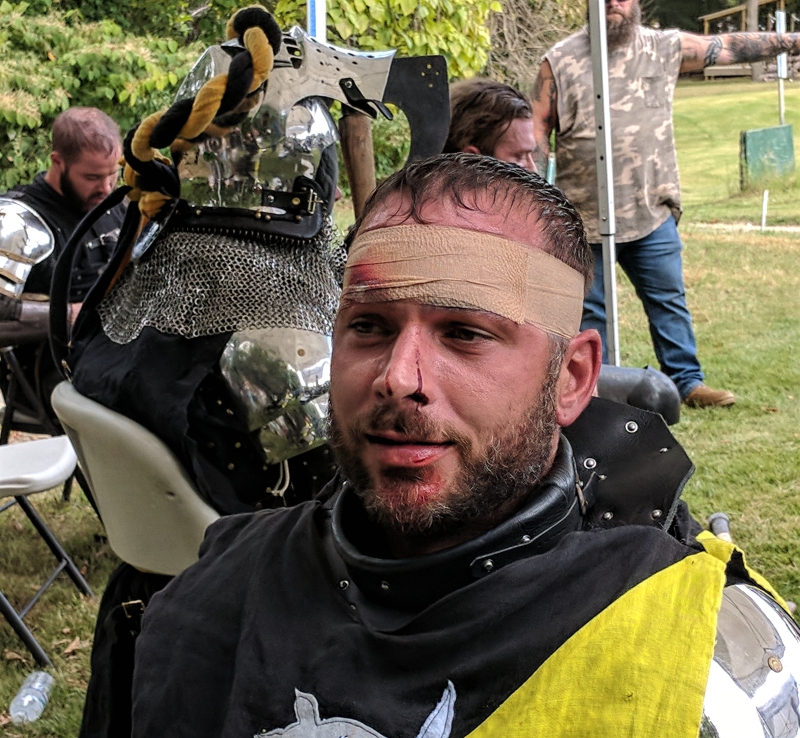 Injuries are part of the ACL. Rhino Mike Janiszewski opened up a cut above his right eye early in the chapter match against the Juggernauts; after a couple of tilts, he’d bitten clear through his lower lip. Credit: Matt Skoufalos.

The fights themselves are brief, brutal affairs, and participants often get injured after enough of them, Greer said.

Every Rhino has been laid up with something, from a broken arm to a concussion or worse.

Juggernauts captain Josh Kearney, 38, of Fairfax, Virginia, took it a step further, saying “there’s a 100 percent chance” of injury participating in the league.

“I’ve broken a couple fingers and my collarbone,” Kearney said.

“It’s a combat sport,” he said. “You take a risk doing everything.”

Kearney joined the league in December 2015 as an alternative to a mixed-martial arts (MMA) career he saw himself aging out of.

But unlike an MMA bout, which involves months of training and preparation, Kearney said “strategy happens on the fly” in the ACL. Training can be a scattershot affair, too. Most of the best ACL fighters gather in Nashua, New Hampshire, where league co-founder Jaye Brooks has built The Knights Hall, a specialized gym. 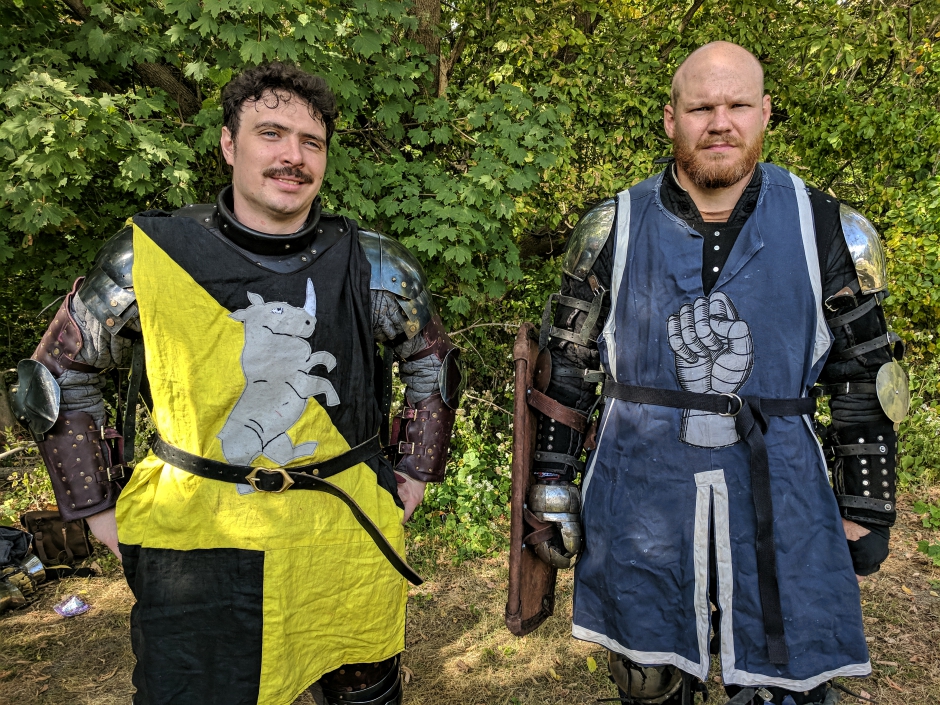 In contrast, Kearney’s Juggernauts practice on weekends in a public park; Greer’s Rhinos are spread out among Pennsylvania, New Jersey, Delaware, and beyond, making scrimmages difficult to coordinate, even when they can be arranged.

The Juggernauts were a team of three only 18 months ago, and now have enough members to potentially support a split into two teams.

ACL co-founder Andre Sinou of Alloway said that since it was established in 2011, the league has grown from 29 members to 400.

Sinou and Brooks established the league around the USA Knights, who are built to represent America in international competition.

“We found out that they were doing a world championship in Poland, and said, ‘Hey, America has to have a team there,’” Sinou said.

The first year, “we got our asses kicked,” he said. By the second year, the USA Knights were second only to Russia; in their third year, they took seven gold medals, one silver, and one bronze in nine events in Spain.

“Since then we’ve won first and second place consistently in a lot of the group categories,” Sinou said. 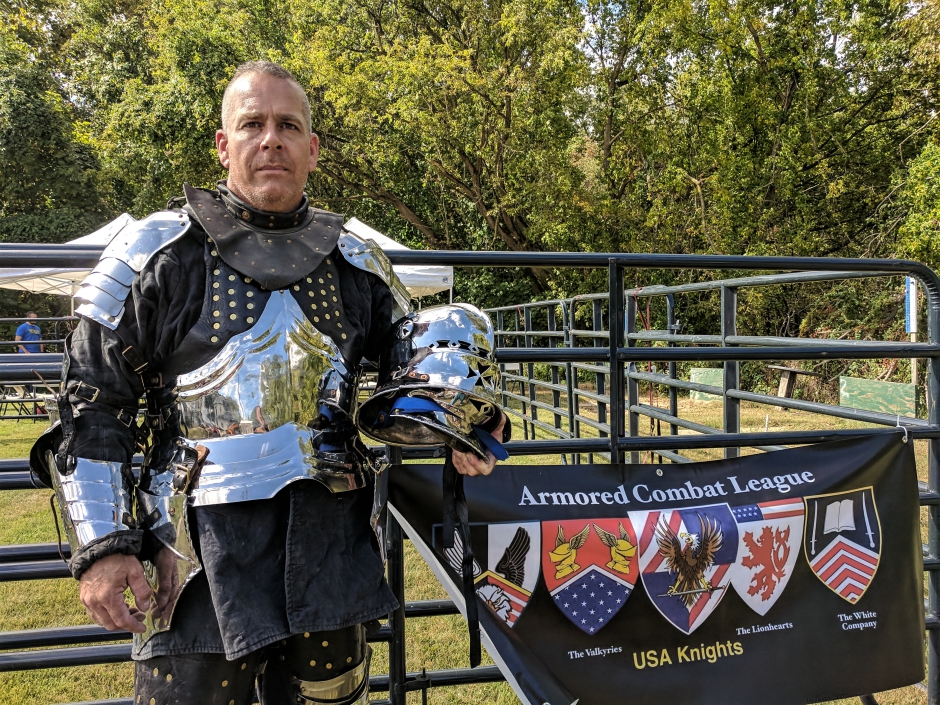 Like Kearney, he’s ex-military, and views ACL members as goodwill ambassadors of the United States internationally.

The league’s code of conduct, while not strictly a code of chivalry, colors its domestic interactions as well.

“You have to have the drive to be part of something that’s bigger than yourself,” Sinou said.

“There’s no politics here, there’s no BS; there’s no room for it,” he said. “Everybody here has to treat everybody else with respect, and if they don’t, we get rid of them.”

Rhinos captain Sean Krachun, a machinist from Marlton, said “the controlled aggression” of the ACL combined with “the outlet of how weird of a sport it is” motivates him to compete. He wants to see it grow from a sideshow into a “more respected,” mainstream activity.

“I’m a very, very competitive person,” Krachun said. “It’s a strange, whole-body competition that I didn’t experience when I played football younger. There’s a lot more mental aspects to this than other sports.” 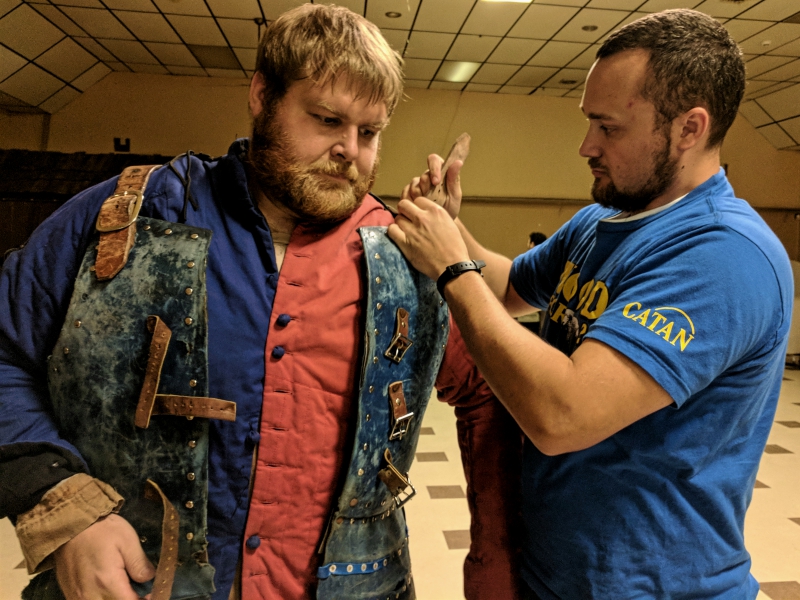 Andrew Dionne of the Washington, D.C. Juggernauts gets an assist into his armor before a chapter match against the Philadelphia Rhinos. Credit: Matt Skoufalos.

Andrew Dionne of Washington, D.C., who said he was “born into” re-enactment fighting, has played rugby and other contact sports, but only the ACL incorporates his love of medieval culture so thoroughly.

Dionne, who is an ACL regional chapter president, said the sport is poised for continued growth, which could make for even bigger spectacles as its ranks swell.

“It would take a commitment from the entire league, but the whole league’s set up for people to fight.”

Later this month, the ACL will return to DREAM Park for New World Cup IV, its East Coast national championship, October 27 and 28. More than 100 fighters are registered to compete, and for the first time in its history, the Cup will include a women’s three-on-three melee tournament. Dionne urges visitors to come take in the event, not just for its novelty, but the caliber of competition.