Fans are getting nervous, however, at the familiar pattern of coughing up leads. 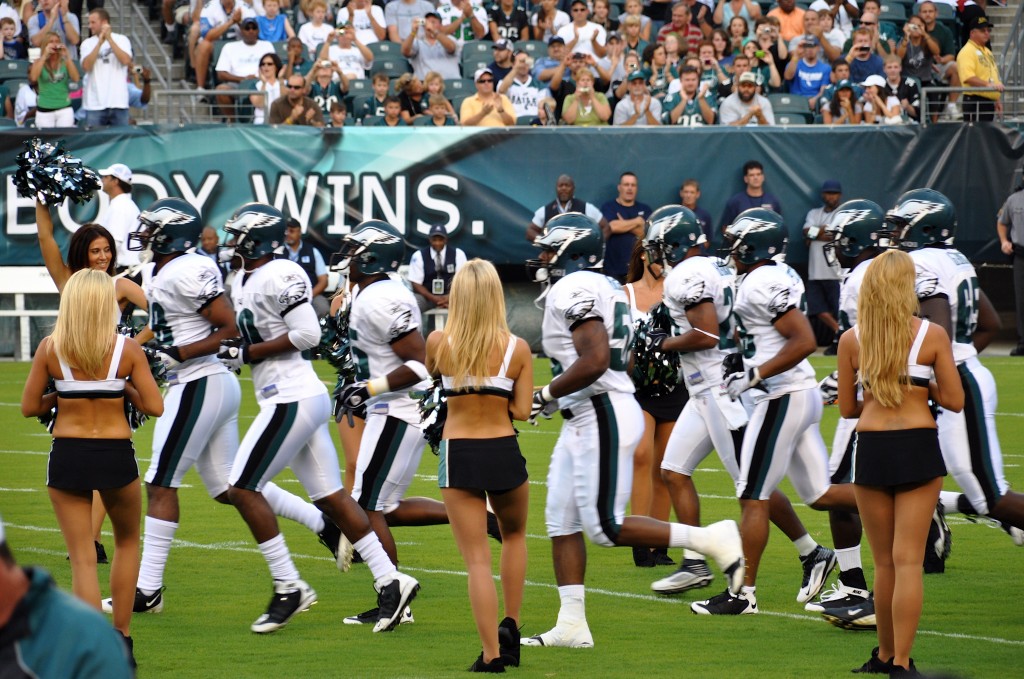 On Sunday, the Eagles took a commanding, 34-7 lead against the visiting St. Louis Rams—and then held on by a frayed thread to improve to 4-1 on the season.

Two pertinent quotes come to mind. One, unattributed, is that “the only thing the prevent defense prevents is winning.”

The second, from Phillies Hall of Fame third baseman Mike Schmidt, described the particularly Philadelphian experience of enjoying “the thrill of winning and the agony of reading about it the next day.”

Buoyed again by tremendous special teams play and another defensive touchdown, the Eagles and their struggling offense seemed to have the game well in hand with two minutes left in the third quarter, as Jeremy Maclin cradled Nick Foles’ second touchdown pass of the day for a 34-7 lead.

On the ensuing possession, however, Foles scrambled for a first down and inexplicably fumbled without having been touched by a defender. All of sudden, the floodgates opened. The Eagles secondary forgot how to cover, and undrafted, third-string, second-year quarterback, Austin Davis, started impersonating John Elway.

The Rams quickly cut the lead to twenty, and then thirteen, as Davis hoisted prayers in the form of deep balls that were answered by Eagles cornerbacks who seemed incapable of realizing where they were on the field or turning around to play the pass.

Eagles defensive coordinator Billy Davis was complicit in the unfolding disaster by employing a prevent defense. After harassing and battering Austin Davis for three quarters, sacking him four times, forcing him into losing two fumbles, and holding his offense to seven points in three quarters, the Eagles backed off, hoping to simply preserve the lead.

For the first time in the history of the NFL, a team scored both a special teams and a defensive touchdown in two consecutive games.

But also for the second week in a row, the Eagles offense was quick-strike only when it worked. Unable to sustain any drives—a persistent and troubling problem—they gave the ball back to the Rams much too quickly to preserve any of their lead.

It was eerily similar to the Eagles’ 2011 and 2012 seasons, when they would enter the fourth quarter with a lead, and then collapse on both sides of the ball. If the defense had made one stop, or if the offense had gotten one first down, those games would have been won. That scenario happened four weeks in a row and nine times in those two seasons, ultimately leading to the firing of Andy Reid.

Most of the fans in the stands this Sunday had been there for many of those games. Remembering the searing pain and lingering effects of those losses, there was genuine fear in the Linc as the Eagles punted the ball away after failing to convert time after time.

Trailing by just six points with two minutes to play, the Rams had made mincemeat of the Eagles defense on the previous three drives. But the Eagles’ strong special teams play rallied once more, as punter Donnie Jones uncorked a coffin corner that was downed at the Rams seven-yard-line.

Aided by a couple of drops, the Eagles defense forced St. Louis off the field on downs, and won the game. It never should have come to that, but the defense deserves credit for having the fortitude to save itself in the nick of time.

Had the Eagles lost this game, it could have derailed their season. The divisional rival Cowboys and Giants kept pace in both of their contests, proving that there are no runaway leads in this division.

As for the fans, listening to them, one would not have been sure if the Eagles had won or lost. No fans appreciate nearly having their hearts ripped out. For the professionals (i.e., the players and coaches), each game is a contest unto itself and a win is a win.

In reaching the 4-1 mark, the Eagles enjoyed a somewhat rejuvenated ground game. Lesean McCoy gained 81 yards, but still looked as though he were running in quicksand. Darren Sproles was integral in the running game, picking up 51 yards on only seven carries, but again breaking free with a big, 25-yard scramble.

Lane Johnson’s return to right tackle undoubtedly aided the running game. The Eagles have to hope he allows the ground attack to be just good enough, as it was Sunday. It seems unlikely it will be devastatingly effective until his mates Jason Kelce and Evan Mathis return from injury. Their second-level blocks, around which McCoy masterfully flows, are what led the Eagles to being the NFL’s best rushing team. Their absence is ailing the Eagles entire offense.

Nick Foles has developed a bad habit of throwing off his back foot, probably because he does not trust his line. He needs to correct that immediately. He completed more than 65 percent of his passes on Sunday for slightly more than 200 yards with two touchdowns and a pick, but added the fumble that opened the door for the Rams’ rally.

Until Foles again really puts the team on his back and carries it to victory, as he did two weeks ago against the Redskins, the offense is going to struggle. Yet any overly harsh criticism of Foles is ridiculous. The offense is disjointed because of injuries. Foles’ 11-2 record in his last 13 regular-season games speaks volumes and should buy him some slack.

A huge game looms next Sunday night against the 3-2 Giants. Fans have to hope the offense can again be good enough, the defense the same, and the special teams as brilliant as they have been.

Foles and the Eagles have found ways to win when they are not playing their best. That is the mark of a good team. Another mark of a good team is playing their best more often than not. That is the next step. If they can take it against a divisional rival, the Eagles will earn their seventh straight home win, and, with Dallas on the road in Seattle, possibly start to separate themselves from the rest of the pack in the NFC East.