Trending
You are at:Home»Opinion»Birds Blog»Birds Blog: Eagles Stumble on the Road Again

With each passing week, it seems more evident that the Eagles unexpected 3-0 start was something of a mirage.

The Philadelphia Eagles dropped a second straight divisional heartbreaker to the Giants at the Meadowlands 28-23.

It was their fourth loss in their last five games. Each loss has been close, but when something different is to blame each week, the answer is usually that the team simply is not that good.

That seems to be the case with these Eagles. An ill-timed turnover, jitters from the rookie quarterback, poor decisions by the head coach, blown coverage, inability to convert in the red zone, or a litany of other things always leaves them just short.

The Giants were the third straight Eagles opponent to be coming off its bye week. Well-rested, they jumped on the Eagles early, and it was an uphill battle from there. Wentz started the game by throwing two terrible interceptions on the Eagles first two possessions. The defense failed to pick him up, quickly allowing two touchdown passes, and suddenly the Eagles were facing a 14-0 hole on the road.

The Eagles did accomplish one positive thing on Sunday by opening up the offense and allowing for more downfield routes. For his part, Wentz hung in there after a horrid start and threw for 364 yards, many on much longer routes than he had been attempting previously.

It is evident, however, in every game that Wentz simply lacks offensive weapons. Zach Ertz finally showed up as a part of the passing game, and Jordan Matthews is competent, but they are certainly not enough, and they are not supported by other significant contributors. 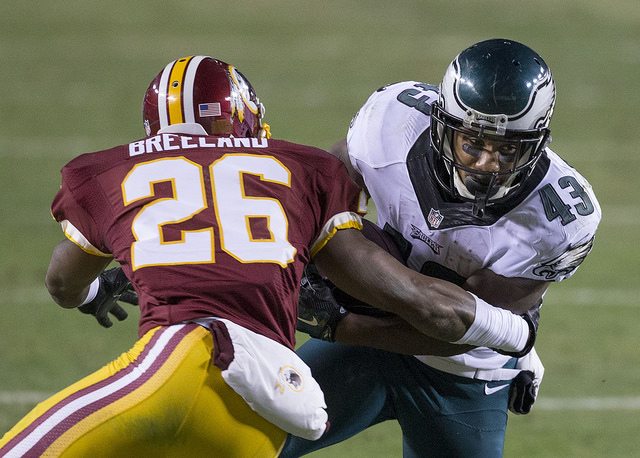 The rushing attack was not bad, but the Eagles’ reliance on Darren Sproles as their primary ball carrier seems unwise.

Sproles in the ultimate professional, but at 33 years old, standing five-feet, six-inches tall, and weighing in at 190 pounds, he’s more effective as a third-down back and special-teams returner than a bell cow.

Ryan Matthews has been ineffective, and is seemingly in the doghouse after one too many fumbles.

Head coach Doug Pederson has also been mixing in Kenjon Barner and Wendell Smallwood, seemingly with no rhyme or reason. The Eagles would be better served to settle on one or two backs, allow them to find a rhythm, and use Sproles in a third-down role.

To complicate matters, Doug Pederson has clearly regressed as a coach. Clearly overcompensating for his blunder that cost the Eagles the Cowboys game, he was overly-aggressive against the Giants, twice trying to convert fourth downs rather than kicking easy field goals. He compounded those errors with terrible play calls, neither of which worked. This game, he directly cost the Eagles six points while managing to waste a 66-yard punt return from Sproles in the process. The Eagles lost the game by 5 points.

The defense was passable, thanks to a pair of late interceptions. It stopped the Giants running game—which is not difficult to do this season—but gave up four passing touchdowns to Giants quarterback Eli Manning, who’d had just eight in seven games prior. They did not pressure Manning much, his Achilles heel, and allowed him to have his best game of the season.

The Eagles outgained the Giants by a large margin, and tallied more first downs, but were unable to ever take the lead, having fallen behind by too much too quickly. Against the Cowboys last week, poor strategic decisions by the coach and the late-game defense were their undoing. Against the Lions, it was a late fumble, and against the Redskins it was everything.

Even though the Eagles are +6 in turnovers, fifth in the NFL, they haven’t always been able to capitalize on that statistic. After Jordan Hicks’ interception inside the two-minute mark, the Eagles advanced to the Giants’ 17-yard-line and had a golden opportunity to steal the game before their drive stalled. Perhaps if Pederson had opted for one of the earlier field goals, it could have been enough.

Again Carson Wentz was unable to make a play at the end of the game to win it. He has had several similar opportunities, and has failed each time. He was blitzed relentlessly on the final drive, and his fourth-down throw to the end zone fell to the ground as Jordan Matthews turned the wrong way. Most likely, it is his lack of weapons that has prevented Wentz from being able to pull games out late, but it is not a good trend to allow to develop.

This game was the one that was going to tell Eagles fans if their team had heart and the gumption to beat a well-rested division rival on the road. The good news is that they have some heart; they just lack players. The fans would do well to recalibrate their expectations because their schedule will do the Eagles no favors. The 6-3 Atlanta Falcons are coming to South Philly next week. Perhaps the Eagles will continue to play well at home, but Pederson needs to reboot his thinking if the team is to accomplish anything this season.