Trending
You are at:Home»Opinion»Birds Blog»Birds Blog: Eagles Thrash Titans, Looking Ahead to Dallas

The Eagles are hungry to throttle their divisional rivals–so much so that the team may have likely overlooked a weaker Titans opponent with few repercussions. 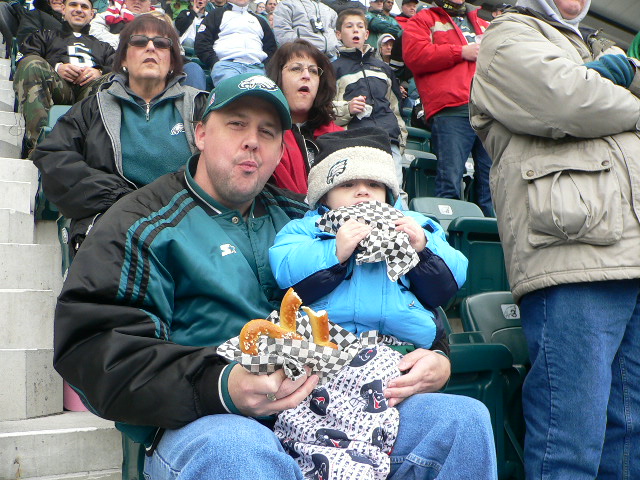 Every game in an NFL season is important, but Sunday’s Eagles game against the Tennessee Titans held little intrigue, serving only as a placeholder; a task to be completed before the monumentally important stretch of the schedule begins.

The Eagles treated it as such, too, dispatching the visitors 43-24 in a slightly sloppy affair, perhaps with an eye firmly fixed on the next game.

Of note was the loss of linebacker Emmanuel Acho, who was injured in the contest; Acho had been teaming with Casey Matthews to fill in for the injured Demeco Ryans, and his departure makes a thin linebacking corps thinner yet.

The Eagles offensive line played perhaps its best game of the season, finally seeming to jell after overcoming the instability of a rash of injuries. Rejuvenated, the line blocked its way to 164 team rushing yards, 130 of which were tallied by Lesean McCoy, including his longest run of the year, a 53-yard scamper early in the game.

The Eagles also continued to get an effective pass rush from their front seven. They sacked Titans quarterback Zack Mettenberger five times, with two other Vinny Curry sacks negated by penalties. The defense also had three takeaways: an interception by Brandon Boykin and two fumble recoveries.

The Eagles special teams unit also continued its record-setting pace, scoring yet another touchdown, this time on a 107-yard return by rookie Josh Huff on the opening possession. Importantly, the Eagles won a tenth consecutive home game, making the Linc a place no team wants to visit.

On the negative side of the ledger, Mark Sanchez showed why he is a backup NFL quarterback. In the long run, Eagles fans should be hoping for a quick return of Nick Foles, who has not played great this year, but is a significant upgrade over his replacement.

Turnovers have always plagued Sanchez, who has more interceptions than touchdowns in his career stats, including 48 fumbles, some of which were quite memorable. On Sunday, despite throwing for 300 yards, he tossed a pair of weak interceptions and struggled mightily in the Red Zone.

Sanchez has now thrown six interceptions and lost two fumbles in the three-and-a-half games he has played versus seven touchdown passes. Eagles fans just have to hope he can limit his turnovers in the NFC East Thanksgiving Day showdown. Despite his performance, Sanchez carries a huge chip on his shoulder, and there is no better stage to make a case for himself than on national TV with the division title resting, in part, on the outcome.

For their part, the Cowboys played Sunday night and had to fight tooth and nail to steal a game from the lowly New York Giants. They trailed with three minutes left in the game, and if not for the characteristically clownish play of Eli Manning, would have dropped a game they could not have afforded to lose.

Quarterback Tony Romo is playing well, but he is injured. Since hurting his back four weeks ago, he has been unable to practice each week until Thursday. This week, the game is on Thursday, so he will be pressed to be ready.

With Romo’s accuracy and the weapons at his disposal, it is imperative the Eagles pressure him. He appears frail and not able to withstand much punishment. The Eagles pass rush has been ferocious at times this season. If they are to win Thursday, it will have to be as fierce as ever.

The way things are shaping up, it is unlikely, although not impossible, that a wild-card berth will be filled by an NFC East team. The most critical juncture of the season has arrived.

On Thursday, as tables are set all around the country, so will the stage be set for the first course in the feast that will determine the fate of the NFC East in 2014. The appetizers will be served in Dallas; dinner will be a two-course affair at Lincoln Financial Field, with the Seahawks and those same Cowboys coming to town in the next three weeks.

Loosen your belts and here’s hoping we need room for dessert.