A four-turnover day from QB Mark Sanchez and an inconsistent defensive effort undid the Eagles in a tough road match-up. 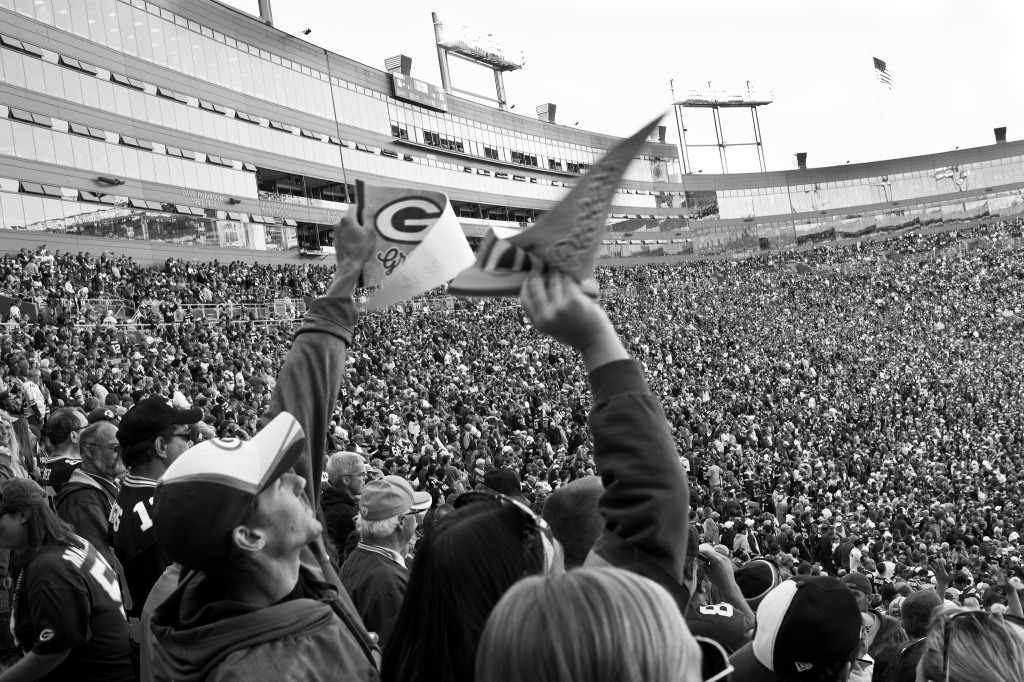 Fresh off a Monday Night romp of the Carolina Panthers that ended in a career day and a pair of celebratory cheesesteaks for quarterback Mark Sanchez, the Philadelphia Eagles went into Lambeau Field Sunday and were handed their worst defeat in 42 years.

Yes, this was a blow-out of historic proportions, but the 53-20 final score was merely academic in a contest that was mismatched from the start.

Against the Sanchez-led Eagles, the Packers topped the 50-point mark for a consecutive week behind a bona fide quarterback, Aaron Rodgers, who is playing as well as any other to have donned pads.

Entering the game, it seemed clear that the Eagles would need to play nearly perfectly to win. Instead, they were soundly beaten in all phases.

Perhaps the team is just not ready to challenge a tough road opponent—its three losses have all come away from the Linc, against San Francisco, Arizona, and now, Green Bay—in the way that championship-caliber teams do.

The optimistic view is that the team dropped a bad game, as any team can, but that its miscues were magnified against a scorching-hot Packers squad that no team in the NFL could beat at home right now.

(Pundits are already looking past next week’s NFC Central matchup against the Lions to the Nov. 30 Patriots-Packers contest as a possible Super Bowl preview.)

For those who take the pessimistic view, that this game showed the Eagles are not on the same elite level as the Packers, they would be wise to note that both teams have matching 6-3 records. The very same Packers lost by three touchdowns to the 4-6 New Orleans Saints just three weeks ago.

What does that mean? That the NFL is a week-to-week proposition, that good teams have bad games, and that the Packers are a different team at home than they are on the road.

On Sunday, the Eagles defense was probably most to blame for its failure to keep the team in the game. But for an Eagles offense that was charged with playing a ball-control game—scoring points while sustaining drives to limit the Packers’ possessions—a four-turnover day ran quite contrary to the plan.

To execute a possession strategy, the Eagles needed a big game from Lesean McCoy. In a trend that is becoming far too frequent, they did not get it. Truly, the back often had nowhere to go, but McCoy still seems too focused on busting a long run, which sometimes prevents him from simply taking the three-to-five-yard pickups that help keep the sticks moving.

A backup quarterback is often charged with being a caretaker of the offense, and Sanchez was burdened by the task Sunday. He threw two interceptions, one of which was returned for a touchdown, and lost two fumbles (alhough one appeared to be McCoy’s fault in a bungled handoff).

All quarterbacks miss throws, but Sanchez was erratic throughout the contest. When the game plan started to unravel, Sanchez was unable to regroup, and often made things worse for himself. His feeble attempt to scoop up his second fumble instead of falling on it for safety led to another six points the other way, as the Packers’ Casey Hayward rumbled 49 yards for a touchdown on the play.

Those two defensive touchdowns were supplemented by another on special teams, and the Eagles discovered that their best-in-the-business unit had the tables turned on it. The Eagles did did block a late-game punt, recovering it at the Packers’ five yard line, but that ray of hope dimmed quickly, as head-scratching play calling led to a turnover on downs.

It falls on Chip Kelly now to help his team forget about this debacle. The best balm for a loss like Sunday’s is a confidence-restoring win, and the visiting Tennessee Titans should provide that next week. Back at Lincoln Financial Field, where the Eagles have won nine straight, the 2-7 Titans will arrive on short rest after a Monday-night matchup with the Pittsburgh Steelers.

The Eagles last got blown out early in the 2013 season, falling 52-20 to the eventual AFC Conference Champion Denver Broncos; they shook that off to take the NFC East division title. It is seeming more and more likely that the Eagles’ fate will be decided by a pair of late-season contests with their NFC East rivals, the Dallas Cowboys. Both teams currently share first place with identical, 7-3 records.

It is unlikely that starting quarterback Nick Foles will be back for either of those games, and it seems equally unlikely that Sanchez will be the catalyst who sparks the unit to victory. The Eagles must now rely on Kelly’s coaching intellect to shepherd the team through the gantlet and into the playoffs, as the temperature drops, and the stakes are raised with each passing week.