The successful pop-up park outside of City Hall will be bigger, more interactive, and more environmentally focused in its second year. We speak with its designer, Joseph Sikora. 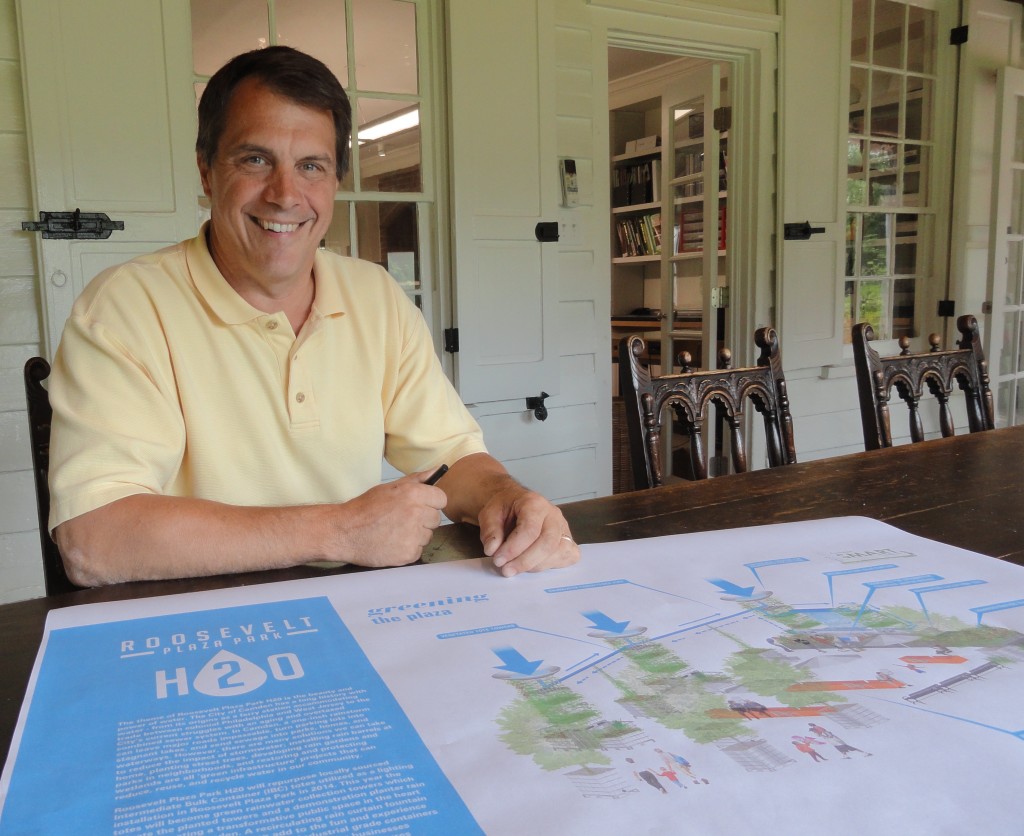 History does not remember the Parkade Building fondly.

Constructed in 1955 as a solution to parking concerns in downtown Camden City—just as residents began to emigrate to the nearby suburbs—the hulking garage is most famous for two things: sitting vacant until its lease expired after having been condemned for Legionnaire’s Disease, and blocking the view of City Hall.

The Parkade was demolished in 2011, and in its place, Roosevelt Plaza Park, the name given to the public grounds outside the entrance of City Hall, was restored.

Through a collaboration among the city, the Camden Redevelopment Agency, Cooper’s Ferry Partnership, and the Camden Special Services District, the park soon became a safe, public gathering space that was sorely needed in the city, bare-bones though it was.

“There were some benches, lights, lawn, some trees,” said Joe Sikora of Haddonfield landscape architects Sikora Wells Appel. “[It] improved so much better than the garage, but still lacked a comfortable setting and scale.”

To see whether people would use the space if it were given more of a facelift, the William Penn Foundation sponsored a $50,000 grant for Roosevelt Plaza Park, which in 2014 was awarded to Sikora Wells Appel and Group Melvin Design. Their solution was to construct a pop-up park in the space. 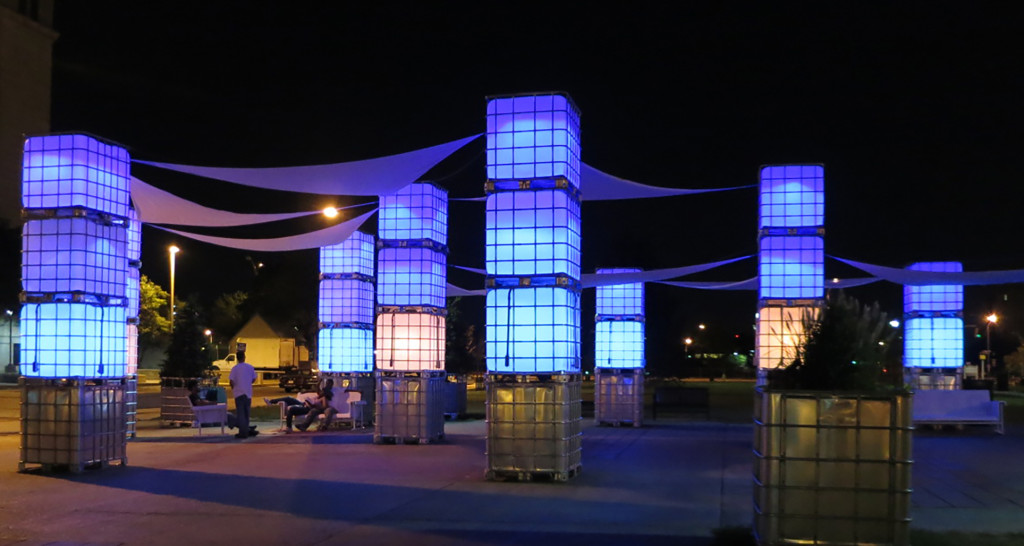 The freedom of impermanence

Sikora described pop-up parks as “the quicker, cheaper, faster” way “to activate a space” without having to get the money for permanent improvements.

“The technique is to use things that are more off-the-shelf or temporary with the idea that it’s not permanent and you don’t have to worry about that huge expense,” he said.

“It opens up some freedom and flexibility in design ideas because you’re not doing it permanently.

“They’re basically palettized barrels,” Sikora said. “There’s businesses, and quite a few in Camden, that recycle them. We thought they were really cool.”

After playing around with the totes, designers found that they stacked well into towers and could support shade cells. With the help of New American Public Art, a design studio in Somerville, MA, the team integrated LED color-morphing lights and motion sensors into the totes to give them an interactive element. The towers then were offset by “a seating grove” with umbrellas and plantings, which were also popular, Sikora said.

But the biggest hit was in many ways the simplest.

“The piano proved to be quite a surprise with how popular it was,” he said. “It brought diverse user groups into the space and became a focal point [of the park]. It seems to attract some pretty talented people.”

In five months of action, the Roosevelt Plaza Park observed more than 3,800 “park-users and activities,” across a “diverse user group,” Sikora’s research showed.

“People who live in the community, people who are homeless, people who go to the methadone clinic across the street, City Hall workers, Rutgers students,” he ticked off. “In this place people weren’t hanging out before, they hang out together.”

In mapping those interactions, he noted, “nothing was stolen, and nothing was damaged” in that time. Cooper’s Ferry leveraged those overwhelmingly positive results into additional funding for a second year of the project, courtesy of William Penn Foundation, Horizon Foundation, Wyncote Foundation, and Wells Fargo Environmental Solutions. 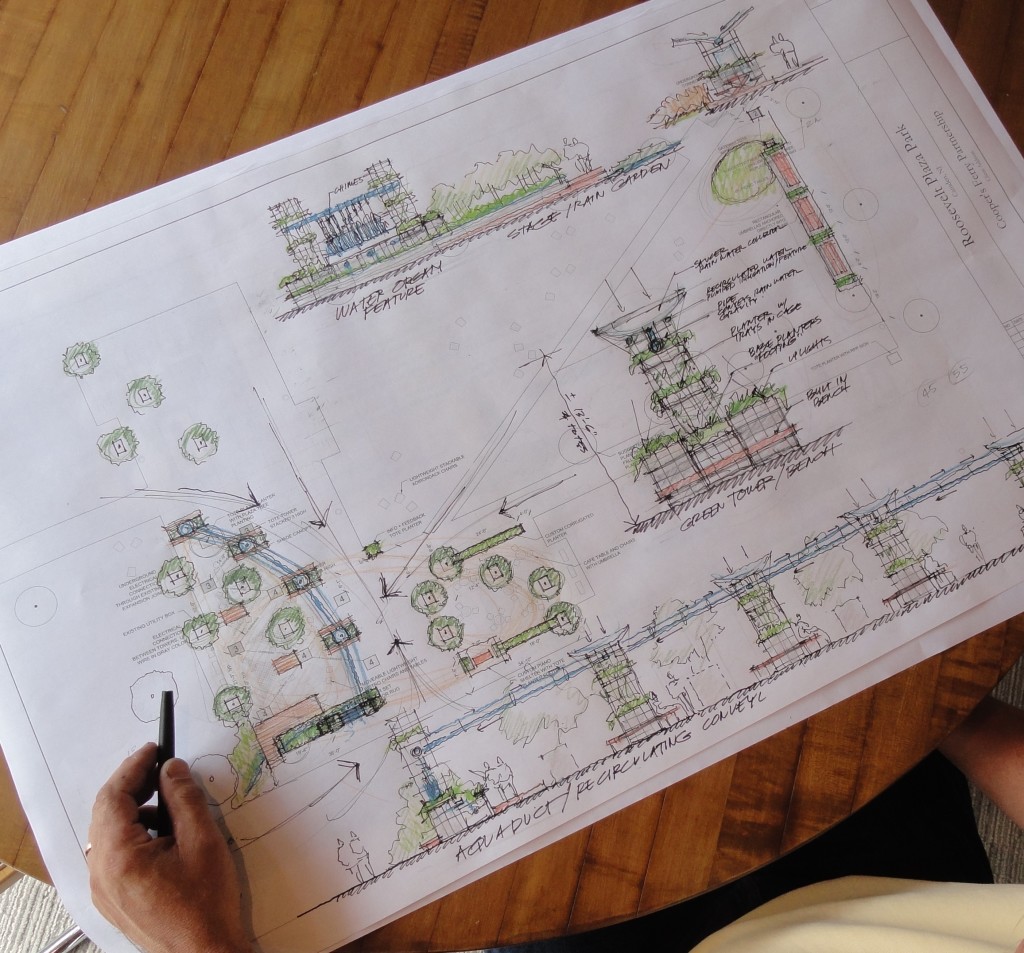 With that extra money to invest, the newest iteration of the pop-up park will include green infrastructure towers, an interactive water feature, and additional trees, seating, and umbrellas.

To start, the IBC totes were recycled and retrofitted to collect rainwater for irrigation and stormwater management, shifting in purpose from light towers to green towers, Sikora said.

“We cut the plastic boxes, filled them with soil, and planted them,” he said.

“We put large saucers on top of the towers and connected them with this large, blue drainage pipe that collects the water and transports it through a rain chain.”

Rainwater will be collected, stored in a cistern, and re-circulated throughout the planters, he said; major storms outfall into a rain garden. An always-on “rain curtain” at the focal point of the garden will create a backdrop to the plaza, while an interactive water organ allows visitors to play with a keypad that activates its spray nozzles.

The piano will also make a comeback for year two of the project. Although the original instrument is being replaced, Sikora pointed out that “it was affected by the elements but still playable.

“We’re also including signage that explains the system and helps educate people about water and the impacts of flooding and the importance of stormwater management in an urban condition,” he said.

“I want it to be fun and a comfortable place to visit, but at the same time, to hopefully teach people about the importance of ecology and water in an urban environment,” Sikora said. “Embedded in the design is art, and integrating art into the landscape.”

The designer also spoke to the value of the short-term benchmarks of the project with keeping its successes reasonable, low-cost, and attainable.

“The fact that it’s a temporary improvement that really freed us up from some of the restrictions that might have been placed on more permanent installations,” Sikora said.

“It allowed us to experiment and try things that we might not normally have tried.” 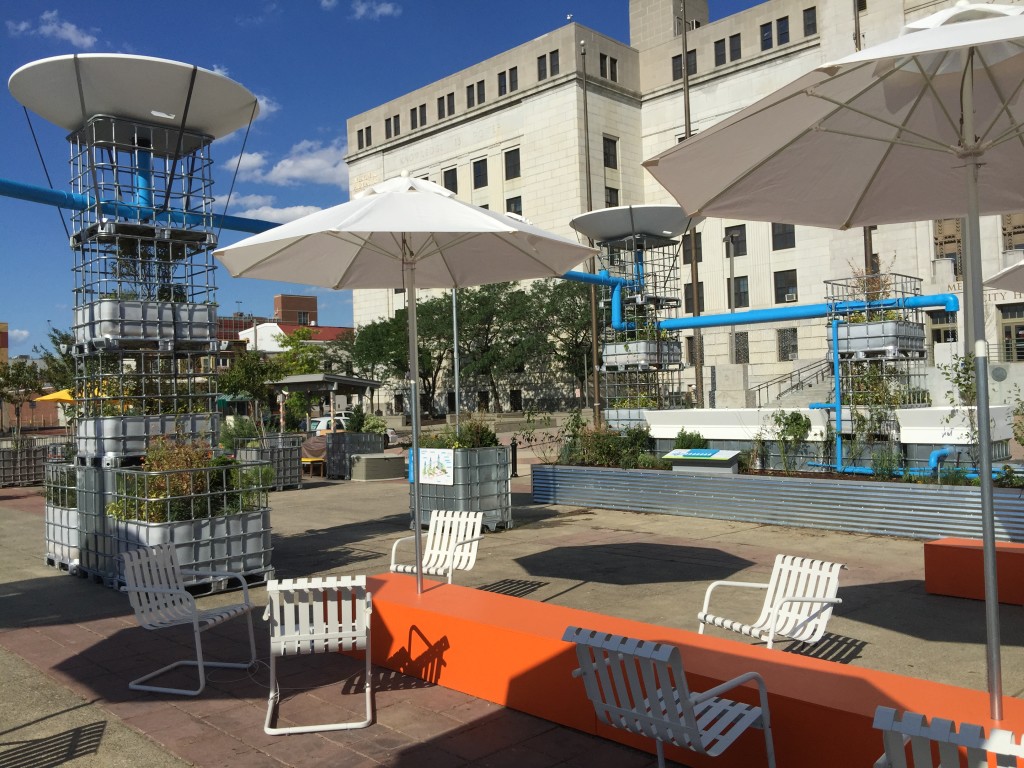 ‘A gateway to the city’

Cooper’s Ferry COO Joseph Myers described the success of the project as the marriage of public- and private-sector investments in creating an experience that unifies a variety of people at the intersection of multiple interests in the evolving Camden City downtown.

“There’s been a growing movement among residents and communities throughout the country to revitalize different cities by looking at public spaces,” Myers said.

“Roosevelt Park is a key park in Camden,” he said. “It is a gateway to the city. It’s literally the crossroads for Camden. The nursing school has broken ground on the South side of the plaza; Rowan is a couple blocks off MLK. It’s attracting more students and businesses.”

Myers credited Camden City Mayor Dana Redd with identifying the park as “a key focal point” of the downtown district and the Camden Special Service District, which staffs and maintains the park, with executing on that shared vision. 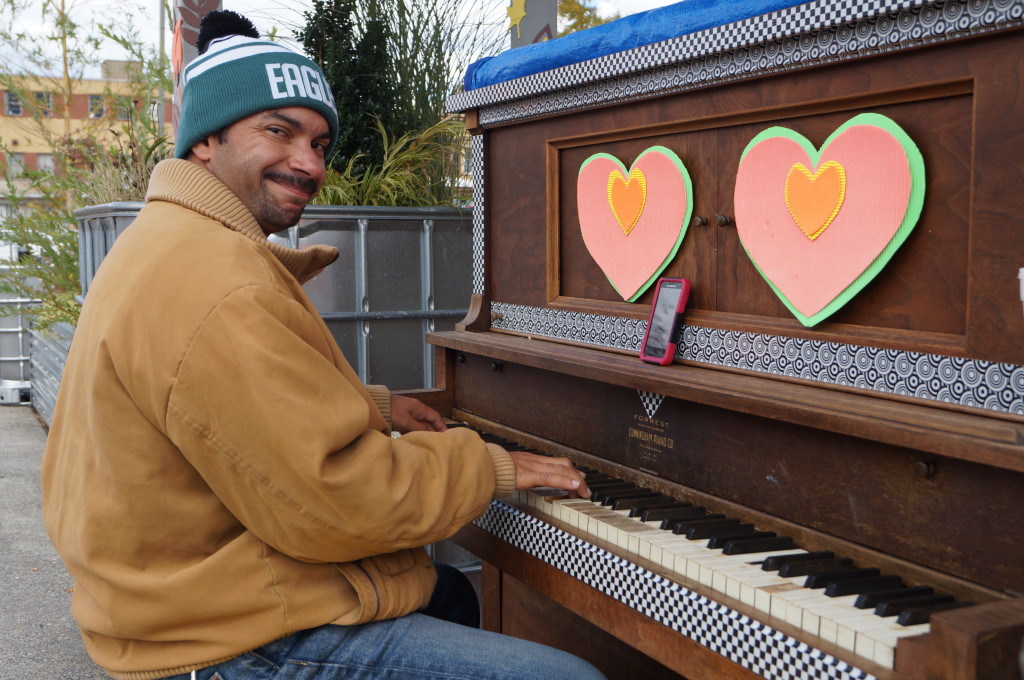 “It takes a lot of time and vision and resources to accomplish this, but it really has to be what the community is looking for,” Myers said. “When you have great partners that are able to capture the thoughts and ideas of residents, that’s when you get a win-win situation.”

Sikora estimates the park will see hundreds of visitors on a daily basis, and should remain in place until the end of the year at the least.

A formal unveiling of Roosevelt Plaza Park will happen later in August, and the city has scheduled a handful of events around the space.

The first, happening at 8 p.m. August 21, is a free screening of Big Hero 6; on September 19, the city will host the free, family-friendly Camden Jam arts and music festival at the park.