Trending
You are at:Home»Business»Chairman of the Boards: Collingswood Man Launches Skateboard Startup

Former helicopter engineer Lee Ballauer is at the controls of his own enterprise, a home-based skateboard business he calls Collingswood Board Company. 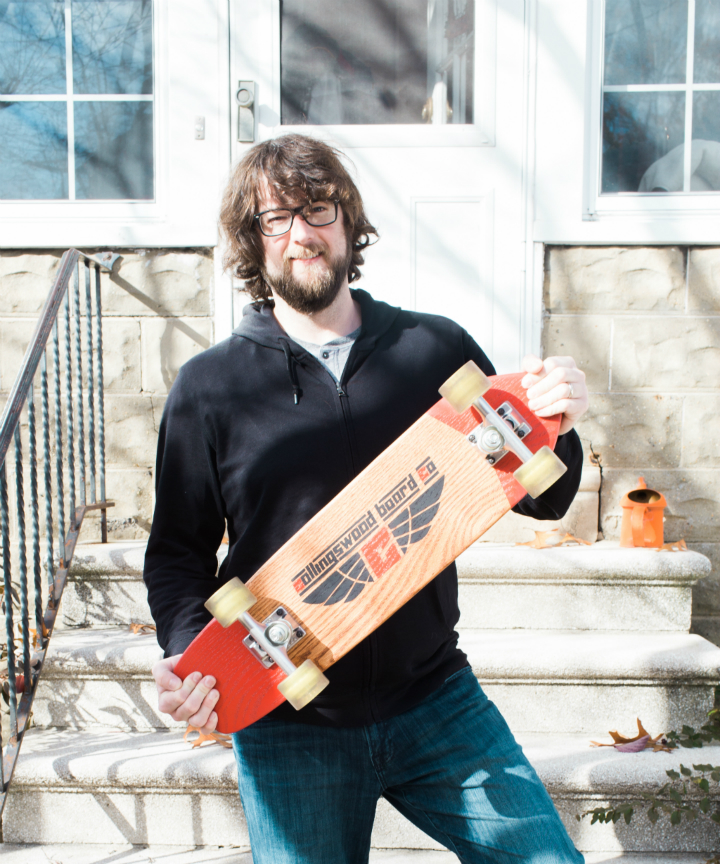 Until February, mechanical engineer Lee Ballauer was a 16-year, third-generation employee of The Boeing Company, working on environmental controls for the V22 Osprey at its Delaware County plant.

But when his career in the aircraft business came to an end, Ballauer didn’t stop being an engineer. Like another Jersey guy once did, he traded in his wings for some wheels.

“I was just looking for something,” the Collingswood resident said. “I did some soul-searching for a couple months before I did anything; did some travel.

“I started looking for something to occupy my time, and I got into woodworking.”

A rekindled passion for woodworking was certainly simpler than designing helicopter oxygen generation and distribution systems, but it wasn’t the only lost passion Ballauer rediscovered during his layoff.

While searching for a way to stay active and spend more time outside, Ballauer took up skateboarding for the first time in some 25 years. The pounds came off, the wheels kept turning, and he began a deep dive into deck culture. 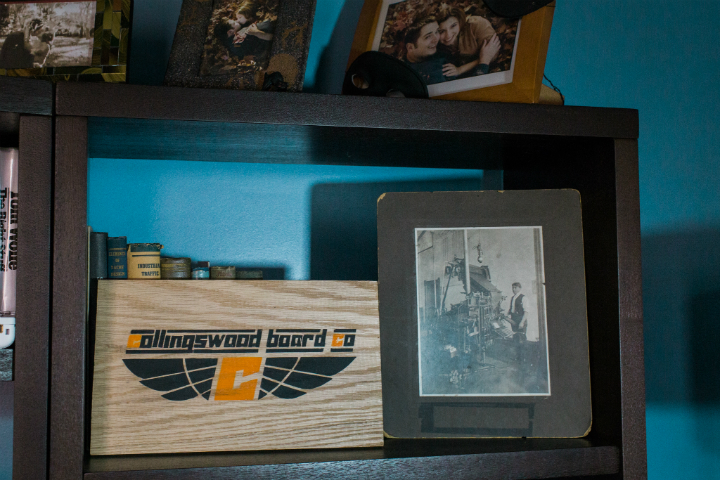 Along the way, Ballauer discovered a niche movement of people who shared his interest in vintage skateboards that more closely resembled the surfboards after which they were modeled. One day, he took some oak planks down to the basement, threw on some music, and started carving and sanding.

The practice was zen-like.

“I could let my brain free a little bit,” Ballauer said.

Yet even freed, his mind lost none of its engineer’s precision. Soon, Ballauer was scaling up smaller designs into three, production-ready models: a flattail cruiser, a kicktail cruiser, and a pintail longboard. He branded his collection Collingswood Board Company. 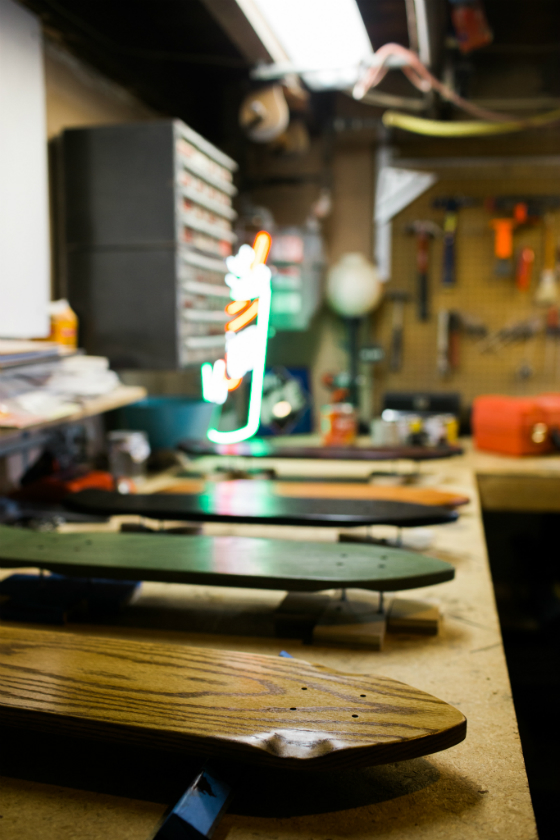 Ballauer said his designs are reminiscent of vintage skateboards, but with a few twists.

The kicktails are carved out of a pair of laminated wooden slabs that have been sealed together. The 37-inch pintail longboard is based on a classic design, with carve-outs that give it some flexibility and reduce some of the weight.

With a solid oak base, Ballauer’s boards are “beefy,” he said; equally able to sustain the weight of an adult skateboarder or the abuse of a teenager.

“Whoever wants to stand on a board and can balance, I want to see them on my board,” Ballauer said.

Although digitally controlled CNC routers are popular among woodworkers today, Ballauer prefers to make his own cuts manually.

Without the aid of computerized reproduction machinery, he’s drawn on his mechanical background to improve his manufacturing processes as he scales up.

“The handmade part of it is really big to me,” Ballauer said. “I’m trying to keep it as old-school as I can. Each board is a little bit different. I’ve got a basic template that I cut it out of, but the final shaping is done by hand.” 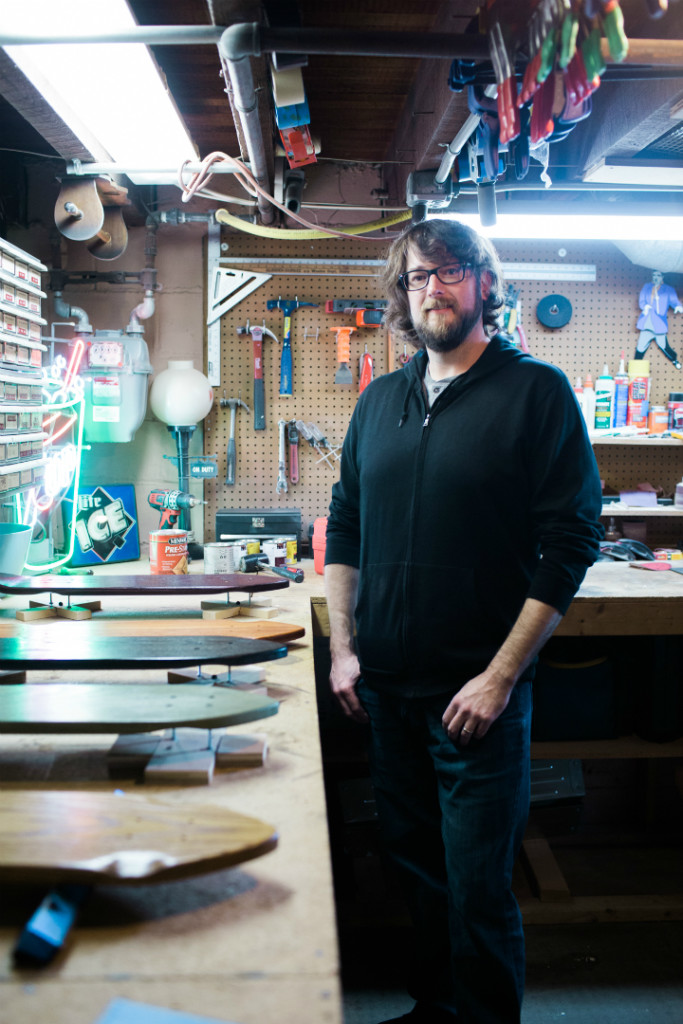 Right now, it takes Ballauer a week to complete a batch of eight skateboards, with the bulk of those hours given over to the curing and finishing process.

His current favorite stain is black cherry, which provides a deep purple that makes the wood grain pop; a close runner-up might be the green, to which he’s adding an orange stripe and pink wheels for a Bart Simpson homage.

“I’m trying to have some fun with some other models too,” he said.

In addition to being stylish, handmade artworks, Ballauer believes that his products can serve a functional role as a “last-mile solution” for mass-transit commuters.

Collingswood has embraced bicycles as a viable mode of transportation, and he thinks there’s just as much of an audience out there for skateboards, too.

“It’s really small,” Ballauer said. “It fits in your backpack, under your desk; it doesn’t really take up space. It’s great for going back and forth to the train station or going down Haddon Avenue. It’s pretty fun to cruise around on.”

Of course, in addition to their practicalities, Ballauer’s skateboards also offer the same amusements he enjoyed as a teenager. 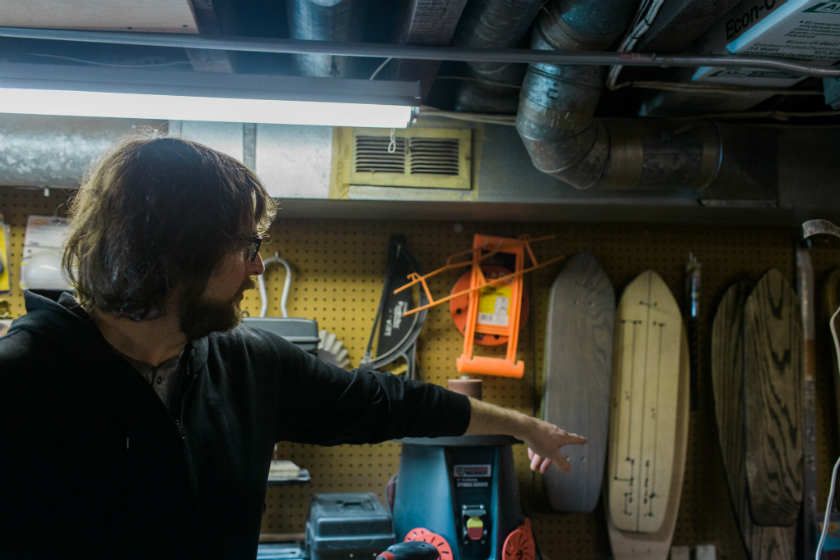 “I like going as fast as I can without falling off,” he said, admitting, “I have fallen quite a bit since I started doing it.

“Bombing hills is a good thing,” Ballauer said. “It’s a rush. It makes me feel like I’m 12 years old again, feeling the wind in my hair and the rumble of the street.”

By branding his products with the name of his hometown, Ballauer hopes to retain its local flavor. The early reception to Collingswood Board Company has been overwhelmingly positive, and he hopes to carry that goodwill forward as the business grows.

“I really like building in Collingswood and doing business in Collingswood,” Ballauer said. “I’m a regular Joe who’s trying something new. I did the corporate thing and found it really wasn’t for me, so I’m branching out on my own.”

As an entrepreneur, “it feels like I’m entering into a community,” he said. “It’s exciting.”