Trending
You are at:Home»Arts»Collingswood Hosts “Sensory-Friendly” Performance of Shrek

The special event offered audiences with autism and other developmental disabilities a chance to experience live theater in a safe environment. 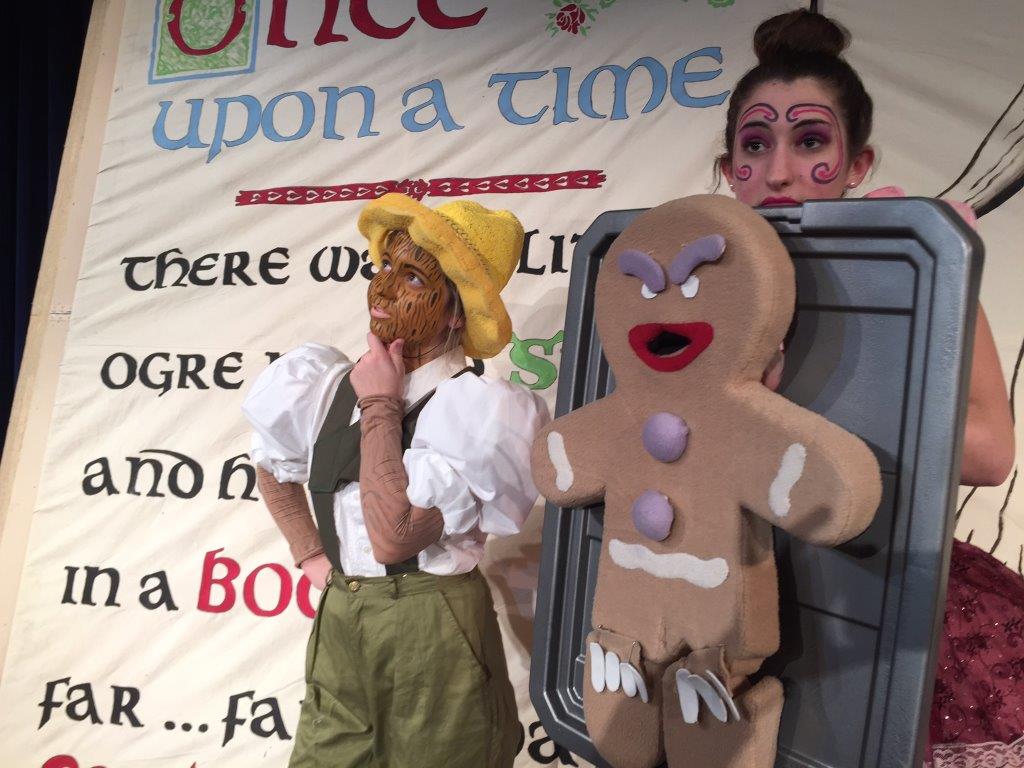 Collingswood Middle School teacher Regina Smith had spent the summer planning extracurricular activities for the students in her classroom, and was still trying to find a way to get a theater trip on their calendar of events.

Smith, who is an autistic support teacher for a classroom of sixth-through-eighth-graders with various disabilities, was looking for opportunities for her kids to apply lessons from their daily living skills curriculum.

One of the bigger ideas on her list was to attend a “sensory-friendly” theatrical performance.

“My students with autism light up with live music and enjoy dance and movement, watching performances, and even performing in class,” Smith wrote in an e-mail; “however, the closest sensory-friendly live theater piece at the time was in Millburn, NJ,” some 90 miles away.

Smith started talking with her colleague, special education teacher Mary Baldwin—who also directs the Collingswood Community Theater—about the possibility for Collingswood to host its own sensory-friendly performance. The district got behind the idea, and on Friday, Collingswood hosted a special showing of its spring musical, Shrek, for students with sensory issues.

‘Too tight, too soft, too noisy, too bright, too cold, too hard’

For people with sensory issues, which can include those with autism spectrum disorders, ordinary interactions may be complicated by a hypersensitivity to light, sound, temperature, and physical stimuli. The difficulty integrating those experiences can produce behaviors that would be inappropriate for a traditional theater audience, which typically demands patrons to sit still and regulate their responses to the performance.

As Smith notes, for students who experience the entire world on these terms, their sensitivity can be tested just by leaving the familiar environs of home and school. It becomes a priority for their educators and aides to identify potential obstacles beforehand and prepare the way for successful encounters to help build their confidence.

“[For] a young girl I used to work with…who faced various extreme sensory challenges, everything was too tight, too soft, too noisy, too bright, too cold, too hard,” Smith said.

“Everywhere we went, she would feel discomfort in some capacity. Consistency was key, and through repetitive outings, we were able to work through some of the sensory needs in order to create functional life skills.

“If we went somewhere for the first time, I was always relieved when an employee or customers would act with perceived understanding because it meant that whatever obstacles we may need to overcome, we would face it with tolerance from others,” she said.

“Teachers and therapists look for these environments to take the people they serve in order to better their skills of daily living.” 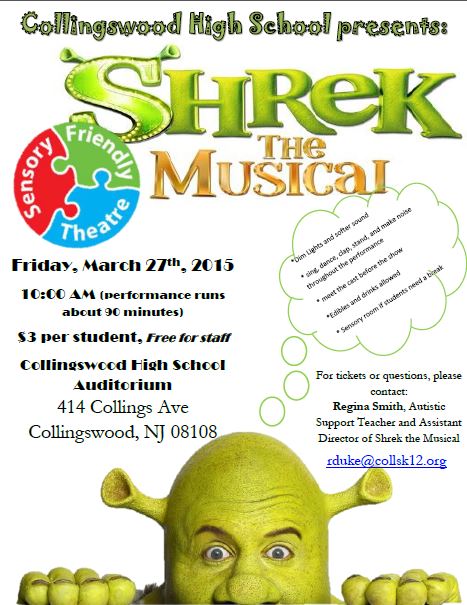 To create an environment more conducive to guests sensitive to sensory stimuli, the special performance of Shrek featured a dimmed-but-not-darkened theater, with audio at a lowered volume.

Cast and crew knew to expect the occasional interjection from the crowd.

Special-needs students from Collingswood served as ushers for the performance, and a sensory “break room” was available for anyone who needed a moment away from the show.

“Few opportunities of this type are available to kids with special needs as they may ‘interrupt’ a more traditional performance,” wrote Collingswood Superintendent Scott Oswald in an e-mail.

“In this case, the audience will be invited to interrupt, to sing, dance—and enjoy—without judgement.”

For a district that values inclusion of people of varying abilities and needs, Oswald said it is important for Collingswood “that we try” new activities, such as the sensory-friendly theater.

“There’s risk and often reward,” he said, “and if something goes wrong, we fix it rather than give up on it. The Collingswood staff is filled with dreamers: people who don’t accept ‘We can’t do that’ as the answer.”

Smith said the popular Dreamworks storyline provided the perfect entré for special-needs students to experience the theater, with its funny script, up-tempo music, and slapstick comedy. She credited the cast and crew–which includes children from her class as well–with being not only willing but enthusiastic to perform a modified version of the show.

“The ‘fourth wall’ of theater and the archaic social etiquette is broken for this show,” Smith said. “Students had various reactions to the performance, but all approached it with a level of emotional maturity and intellect that even surprised me.”

Smith also credited the district faculty and theater staff “who have made theater in Collingswood a completely inclusive and unified experience” in which “the range of abilities and needs of the performers is accepted and appreciated.

“One high school student expressed that our work with students with differing abilities is choreographed into the blocking and dances throughout the whole show so it looks meaningful and deliberate, not like assistance,” Smith said.

“For them and the production staff, working with those with different abilities have trained them better than any academic class could.”

“I think the arts is the perfect avenue through which to include all types of kids,” Oswald said. “Life is filled with differences. Those who participate in and those who enjoy the arts are typically open-minded and they celebrate differences as a strength rather than a limitation.