The Haddonfield storefront represents a push into South Jersey for the Philadelphia-based surf, skate, and bike shop, and owner Rob Everitt hopes to tap into local culture to help build his audience. 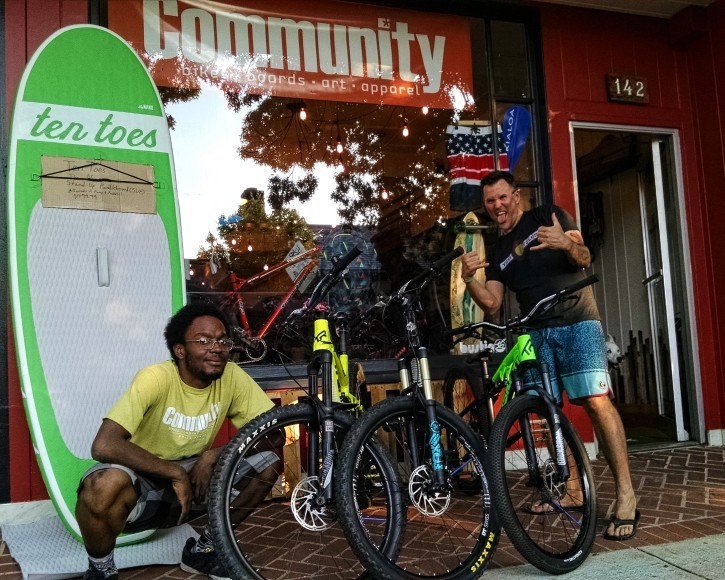 At Community Bikes and Boards, owner Rob Everitt’s mission is about as simple as can be: to get more people to hit the roads, trails, and waterways.

To Everitt, that mandate implies more than simply selling his customers a bunch of cushy, high-end gear and sending them on their way.

It means being an active participant in South Jersey skate, bike, and surf culture, and leading by example in areas of environmental stewardship and community engagement.

“The name isn’t fake,” Everitt said. “We really want to get out there and do it.

“We made a mistake trying to chase the paycheck many years ago,” he said. “We’re just doing what we love now.”

The Bensalem, PA native began his career in the pharmaceutical and graphic design worlds, but said his relief from the day job always came on a mountain bike or surfboard. Everitt established his Philadelphia shop in 2010, and was seeking the opportunity to expand into the suburbs “so we could step up our surf game,” he said. He finished the fit-out on his Haddonfield storefront in June, and has been making the push ever since.

“I just love this little area of Jersey,” Everitt said. “It’s close to Philly but it’s its own little world.”

As a member of the Jersey Off Road Road Bike Association (JORBA), Everitt is helping put riders on local trails and pathways monthly, if not weekly, to explore that world. Community is the demo center for mountain bike manufacturers Transition and Yeti, and as such, hosts two free monthly skills clinics with JORBA (third Thursdays and third Saturdays) in addition to weekly Wednesday night trail rides through Kresson Trails in Cherry Hill and Black Run Preserve in Evesham.

Everitt makes a point of the trail runs being “non-Strava rides,” with an emphasis on collaboration and stewardship, and not pace. 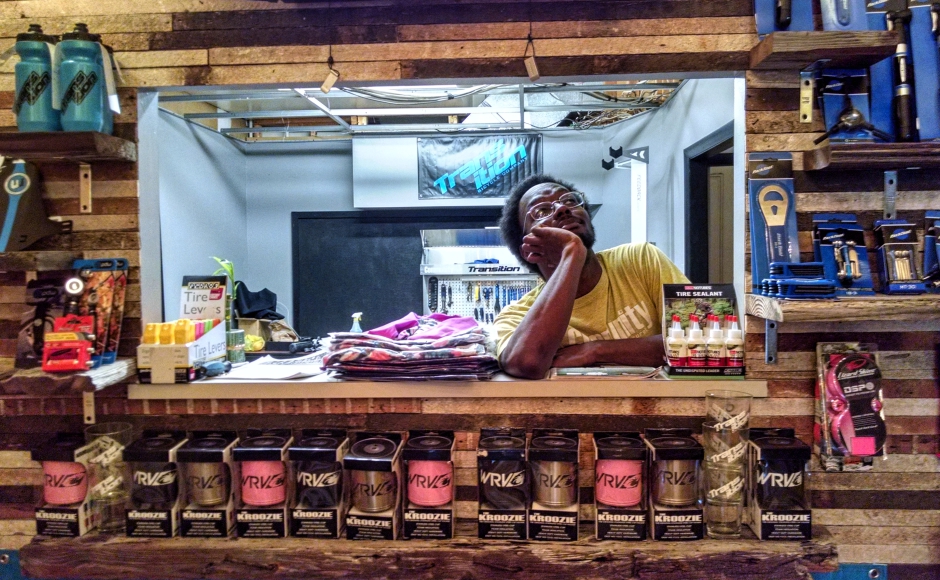 Malik Blassingale in the window of the repair shop at Community Bikes and Boards. Credit: Matt Skoufalos.

“I don’t care how fast you can go,” he said; “I’m not impressed. Everyone has got to start working together.

“Jersey doesn’t know how lucky it is to have such a trail culture; not only building trails, but making them sustainable,” he said.

“The JORBA club has just been off the charts, making little trail heads everywhere. It’s a great time to be a mountain biker.”

The Community Haddonfield storefront is also the starting point for Tuesday night roadway skate-and-rides and a planned series of weekly surf trips that Everitt hopes will help put more suburbanites into the waters of the Atlantic. The shop retails surfboards from local craftsman Brian Wynn of Somer’s Point and Wave Riding Vehicles of Virginia Beach, VA, and stand-up paddleboards from Ten Toes, Suplove, and Riviera Paddlesurf.

“There’s such a great surf community here,” he said. “We’re just that close to big lakes like Medford; I can be surfing in Ventnor, Margate, in the ocean in 45-50 minutes.”

The basement at Community is dedicated to skate culture, with cruisers, longboards, apparel, accessories, and an always-rolling, HD-quality theater showing skate footage. The shop also offers a full-service repair bench, from flat tire fixes to full overhauls, with free pick-up and drop-off for customers who need tune-ups or major repairs. Visit the storefront, and there’s a mini-fridge with a local beer on tap, from which Everitt is happy to offer a free taste for shoppers. 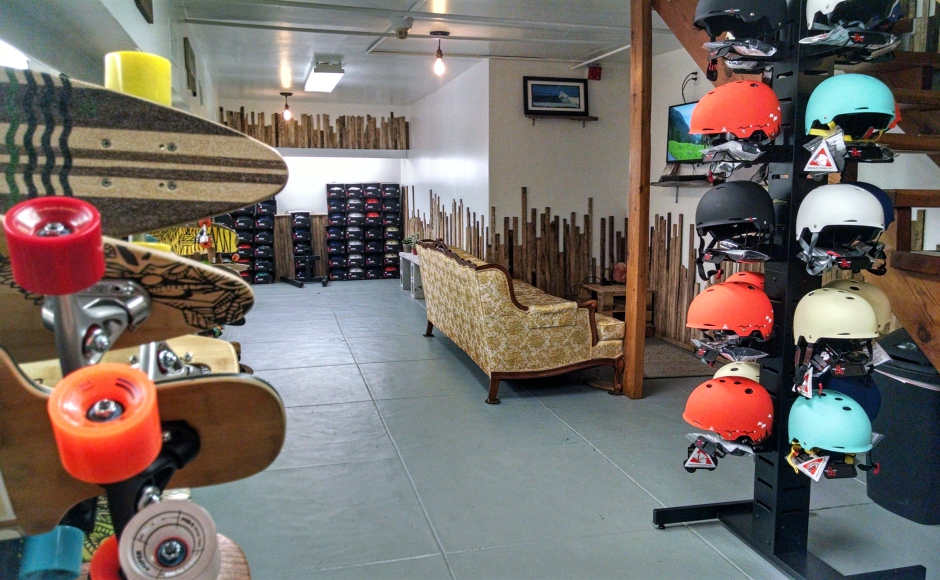 The basement at Community Bikes and Boards is given over to skate culture, with a viewing lounge and gear. Credit: Matt Skoufalos.

“We take it serious, but not too serious,” he said. “At the end of the day, it’s bikes and boards, and it’s about having fun. When you come in and have a beer while we’re fixing your bike, it makes it all better.”

Although the inventory is deep and the brands boutique, Everitt wants Community to feel just as welcoming to the uninitiated as to experts.

Free local beer helps to put newcomers at ease, as does the senior shop dog, Lou Dog, but Everitt said he’s most interested in creating an entry point for people to understand and participate in bike, skate, and surf culture.

“I think the old-school mentality of bike and board shops needs to change,” he said. “You can’t just have people come in and hand them a card. You have to show them why these bikes are so special and awesome. We want to educate and go out and ride with you. That’s better than hitting ‘click and buy.’”