In advance of the 2016 NHL All-Star Game, Josh Kaz takes a look at the meteoric career of the Philadelphia Flyers captain.

Philadelphia Flyers captain Claude Giroux will represent the Flyers in his fourth career All-Star game in Nashville this weekend. Giroux will play for the Metropolitan Division All-Stars in the newly formatted three-on-three mini-tournament, joining a team captained by Alex Ovechkin of the Washington Capitals and coached by Barry Trotz.

On Saturday, Giroux also helped anchor the winning Eastern Conference All-Star team to victories in the Skills Challenge Relay and Discover NHL Shootout; he also participated in the NHL Accuracy Shooting Competition, but didn’t come up with a faster time than Tavares, who hit four targets on five shots in less than 13 seconds.

In advance of the Flyers’ captain’s fourth All-Star game, it’s worth a moment to recollect how Giroux came to become the valuable piece of their lineup that he has been since the 2011-12 season.

Battling to the top

It didn’t come easily. Giroux wanted to play for the OHL (Ontario Hockey League), nearest to his home in Hearst, Ontario, but was never drafted. As he rose through the ranks of the Northern Ontario Hockey Association and Central Canadian Hockey League, Giroux was again pushing towards a draft position—the Canadian Junior Hockey League Draft—but was hampered by mononucleosis. Despite missing time and being slowed by fatigue, he accumulated 13 goals and 27 assists for 40 points in 48 games in the following season.

After this drop-off in production, Giroux was snubbed by every team in the 2005 OHL entry draft, but had enough of a reputation to warrant an invitation to camp with the Gatineau Olympiques of the QMJHL (Quebec Major Junior Hockey League). He not only made the team, but was named the QMJHL Rookie of the Year after scoring 39 goals and 64 assists (103 points) in just 69 games.

That caught the attention of Flyers GM Bobby Clarke, who picked Giroux 22nd overall in the 2006 NHL Entry Draft, famously forgetting his name at the podium. Clarke then got himself sorted out enough to sign Giroux to an entry-level contract in the summer of 2007, not long after he’d led the Olympique to the President’s Cup (league title), capturing the Guy Lafleur award (playoff MVP) for himself with 17 goals and 51 points in just 19 games. 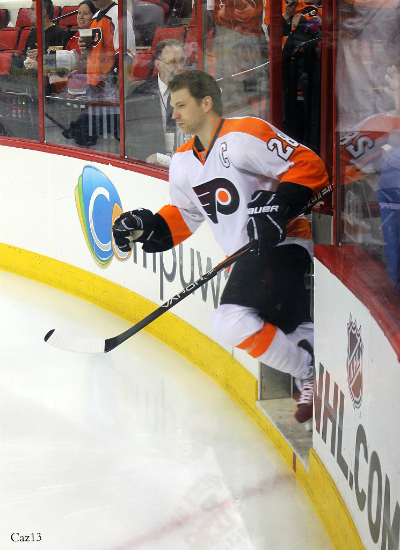 He was called up to the Flyers just after the conclusion of the tournament, and stuck with the big club, scoring 27 points in 42 games.

In his first full season, 2009, Giroux posted somewhat disappointing stats (16 goals, 31 assists; 47 points in 82 games), but blossomed in the 2010 playoffs. Giroux scored 21 points in 23 games, helping the Flyers reach the Stanley Cup Finals, and even potting the overtime game-winner in Game 3.

Giroux took off the following season, scoring 25 goals and 51 assists (76 points) in 82 games while making his first All-Star game along with teammate Danny Briere. During the 2011 off-season, the Flyers traded their cornerstones, captain Mike Richards and alternate captain Jeff Carter, in part because of Giroux’s point-per-game-pace. That year, he hit career-high totals in points (93), goals (28), and assists (65) and was the third-highest point-getter in the league (77 games played).

In the postseason, Giroux dominated the Pittsburgh Penguins with a 14-point performance in the first round (one shy of the franchise record set by winger Tim Kerr in 1989). When asked about his performance, teammate and good friend Danny Briere said, “He was possessed!”

Unfortunately, the Flyers seemed to use up all their energy picking off the Penguins, because they were eliminated in the second round by the eventual conference champion New Jersey Devils. Despite playing at least 10 fewer games than other top playoff contenders, Giroux remained tied for the lead in goals (8) and was fourth overall in points (17) at the conclusion of the postseason.

On January 15, 2013, only days away from the start of the lockout-shortened 2012-13 season, the Flyers made Giroux their new captain, replacing the injured Chris Pronger (concussion-like symptoms). Giroux became the 19th (and fifth-youngest) captain in Flyers history.

In the years that followed, Giroux has become a great leader on and off the ice. His career playoff totals include 61 points in 57 games for the Flyers. He’s also been named to the All-Star team four times in total. And since that 2010-11 season, nobody in the NHL has scored as many points as Claude Giroux: 246 points in 258 games through the 2016 All-Star break. With an emergent core of young defensemen on the rise and some hope from the goaltending position, the only thing left for him to do is shepherd the team to a Stanley Cup victory.