A reinvigorated top line, exceptional play from a rookie defenseman, and some cap relief through a trade with Los Angeles has the Flyers within two points of the postseason.

The Philadelphia Flyers officially reached the halfway point of the season Wednesday night, defeating the Boston Bruins 3-2 in a thrilling comeback victory for a season-high-tying, fourth consecutive win.

Since then, the Flyers played split consecutive shootouts, falling against the the New York Rangers 3-2, but besting the Detroit Red Wings 2-1. After 43 games, the Orange and Black have amassed a 20-15-8 record.

That record is very impressive considering Philadelphia’s early-season struggles. The Flyers opened the year 4-2-1, but even then were just not scoring enough goals to sustain the streak, averaging just 2.1 goals per game, scoring 15 altogether. Scoring their next 15 goals took 10 games, as the Flyers dropped their next six contests and 11 of 13, while being outscored a ridiculous 39 to 19. Part of the issue has been the drop-off in production from their top-line forwards. 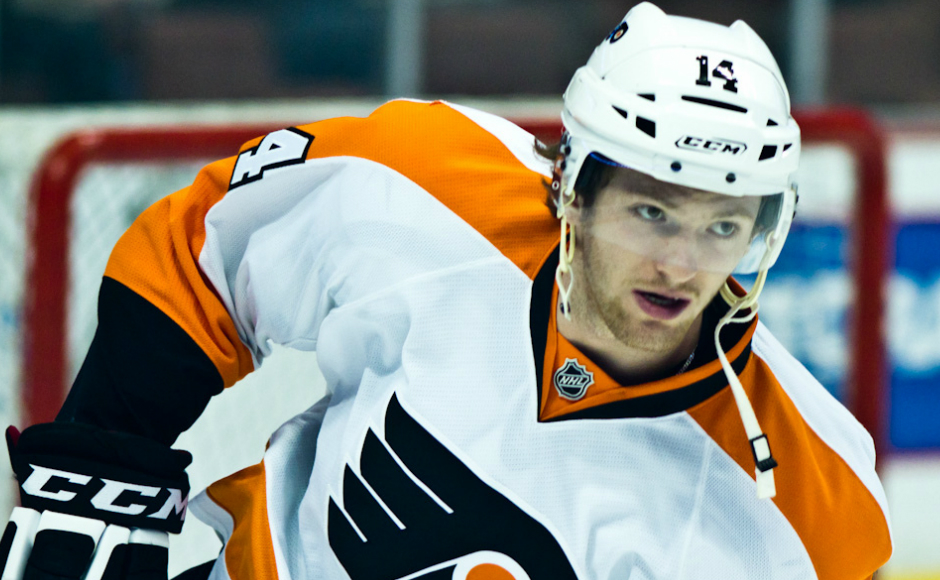 After 20 games last season, all-star winger Jake Voracek led the entire NHL in points (29), combining with center Claude Giroux for an incredible 53 points. At the 20-game mark this year, the two had totaled just 22 points (9 for Voracek and 13 for Giroux).

Rookie head coach Dave Hakstol did everything he could, including dropping Voracek to the fourth line for a long stretch and playing him his off-wing. When both Voracek and Giroux started to come around, so did the Flyers.

Fast-forward another 23 games, and Philadelphia finds itself just two points back of the final Wild Card playoff spot on the strength of a 14-6-3 record in the second quarter of the season. Voracek and Giroux have led the way, playing at a near point-per-game pace (22 apiece), while reuniting with winger Wayne Simmonds (12 goals and 13 assists for 25 points, 43 games played). Much of Voracek’s success came while playing on his off-wing, which he is still currently occupying, with Simmonds on the right side.

Sean Couturier has also been a large part of the Flyers’ success, providing some much-needed secondary scoring on a line with Brayden Schenn and Michael Raffl. Couturier, who also struggled mightily to start the season, (3 points in 14 games while being sidelined for another six games with an upper-body injury), has potted 7 goals and 17 points in the following 23 games.

The whole team has followed suit, netting 62 goals (2.7 goals per game) while allowing 53 goals (2.3 GPG) in the last 23 games, as compared to having scored just 34 goals (1.7 GPG) versus 57 goals against (2.6 GPG) in the first 20 contests. Three seems to be the magic number for the Flyers, who are 17-0-2 when scoring three goals in a game (including shootout team goals); the team has tallied four or more goals in eight of the last 19 games.

Comparatively, in their first 24 games, Philadelphia was shut out three times and scored just one goal in another 11 of those games; in another five games, they netted three or fewer goals. 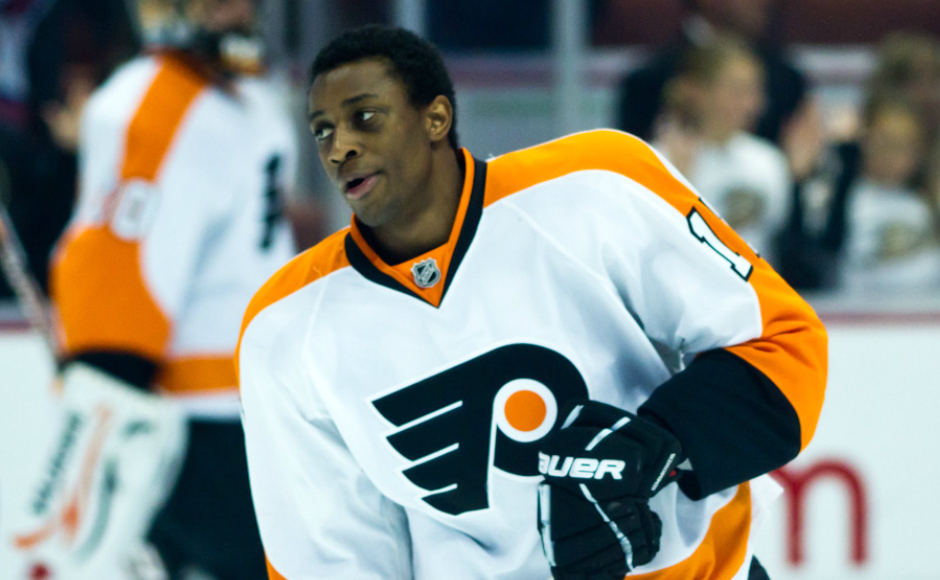 The Flyers still must improve their special-teams play. Last season, the team had the third-ranked NHL power play, scoring on 23 percent of man-advantage situations. In the first six games of the year, Philadelphia went four-for-22 (18 percent), and then 0-for-16 in the next seven.

However, the midseason (Nov. 14) call-up of defenseman Shayne Gostisbehere has dramatically improved the Flyers’ play in all phases of the game. Hakstol has shown confidence in the rookie, adding him to the team’s top power-play unit and playing him more than 18 minutes per game on average.

Since then, Gostisbehere has 7 goals, three of which have come as overtime game winners, and 9 assists for 16 points in 25 games. Eight of his 16 points have come on the power play, sparking the turnaround. In 16 games without Gostisbehere, including the two games he missed with a lower-body injury, the Flyers are 7-of-58 (12 percent) versus 13-of-75 (17 percent) with the young defenseman in the lineup. That percentage still needs to improve as the season wears on, but it is slowly trending in the right direction, especially with Voracek and Giroux starting to score again.

The same concerns have dogged the Flyers’ penalty-killing unit, which last year was third-from the league bottom. (77 percent). In 2016, not much has changed, as the team ranks 23rd in the league (78 percent). Except for a brief, nine-game stretch in which the Flyers went a perfect 24 for 24, improving to an impressive 80 percent (15th in the NHL), the team has been less than average in its penalty-killing efforts.

Despite their poor specialty-teams play, the Flyers have been a strong five-on-five team this season, where they rank second in the league, having allowed just 63 goals against in 43 games played. The defense is starting to really understand and play Hakstol’s system to perfection, especially newcomers Evgeny Medvedev (who leads the Flyers in plus-minus at +8), Gostisbehere (+6), and Radko Gudas (+1 while averaging a career-high 20:55 minutes per game. Point weapon Michael Del Zotto has also been very good for the Flyers in the second quarter of the season, leading the team in ice time (23:58 on average) with a respectable +4.

Philadelphia has also found its footing in the second half thanks to fine goaltending, particularly from Michal Neuvirth, who is brandishing a league-leading .936 save percentage (among goalies with 15 games played or more) and 2.05 goals-against average. In 19 games, including two in relief, Neuvirth has been a pleasant surprise, allowing only 37 goals. The Czech native has limited opponents to two or fewer goals in 12 of the 19 games he’s played, and his three shutouts tie him with starter Steve Mason for eighth in the league.

Mason struggled early in the season, allowing three or more goals in six of his first nine games, and didn’t earn his third win until mid-November. Since then, Mason has recovered, limiting opponents to three or fewer goals or less in 11 of his next 18 games for a 2.22 GAA and a .918 save percentage during that span. 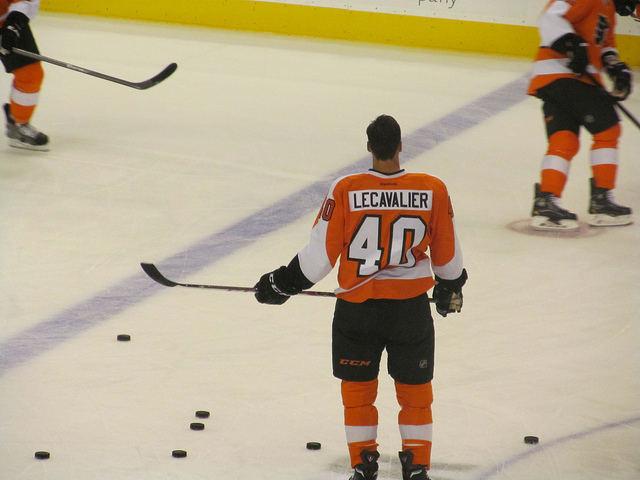 On January 6, Philadelphia traded forward Vincent Lecavalier and defenseman Luke Schenn to the Los Angeles Kings for 23-year-old centerman Jordan Weal and a third-round pick in the 2016 NHL entry draft.

The Flyers will retain half of the salary on both Schenn’s and Lecavalier’s contracts, the maximum amount of salary allowed under the collective bargaining agreement ($2.25 million for Lecavalier, who has two years left on his contract, and $1.8 million from Schenn, whose contract expires at season’s end).

In total, the Flyers saved $4 million in cap space this season. The deal also was contingent on Lecavalier retiring at the end of the season, which will relieve both the Flyers and Kings of the remainder of his contract.

Weal has been a very good player for the Manchester Monachs, the Kings’ AHL affiliate club. The young forward has registered 139 points in 149 games in his last two seasons in the AHL along with 22 points in 19 playoff games. He helped the Monarchs win the Calder Cup Championship and took home the Jack A Butterfield trophy (awarded to the AHL Playoff MVP) while doing it.

Philadelphia’s upcoming schedule will be very important to its future: 11 of the next 14 games come against teams ahead of them in the Eastern Conference standings. Currently, the Flyers are sitting at sixth place in the Wild Card standings, and need to be at least second to earn a playoff berth. Fortunately, the Flyers are just two points behind the second-place Montreal Canadiens with three games in hand, and have at least one game in hand on every team above them in the standings.