Cartoonist Lee Angerstein will invite guests to experience his independent cartoon, Chup and Lyle, at the level of its characters when he transforms MK Apothecary into a pop art event December 13. 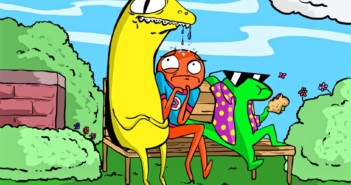 Chup and Lyle on a Bench. Credit: Lee Angerstein.

If you’ve ever wondered what it feels like to step inside the world of a cartoon character, then local artist Lee Angerstein would like to give you the opportunity to do so December 13.

That’s when he will transform the MK Apothecary art gallery in Collingswood into Dudetown, the world of Chup and Lyle, his independent cartoon.

Angerstein, who’s both produced the series and taught the process of cartooning from his studio at the SoHa Arts Building in Haddon Township, will debut the second episode of Chup and Lyle, “Dungeons and Drangus,” at the show.

The immersive exhibit will feature a service counter from Donut Ask, the shop from Chup’s job, complete with edible donuts and “bean juice” (coffee), the official drink of Dudetown.

It also lifts the curtain on the creative process. Guests will have the opportunity to ask questions and to review storyboards, character profiles, and original artwork.

Gallery owner Kristine Go said she and co-owner Mike Aguirre wants their space to provide “full creative expression for every artist in the community.” 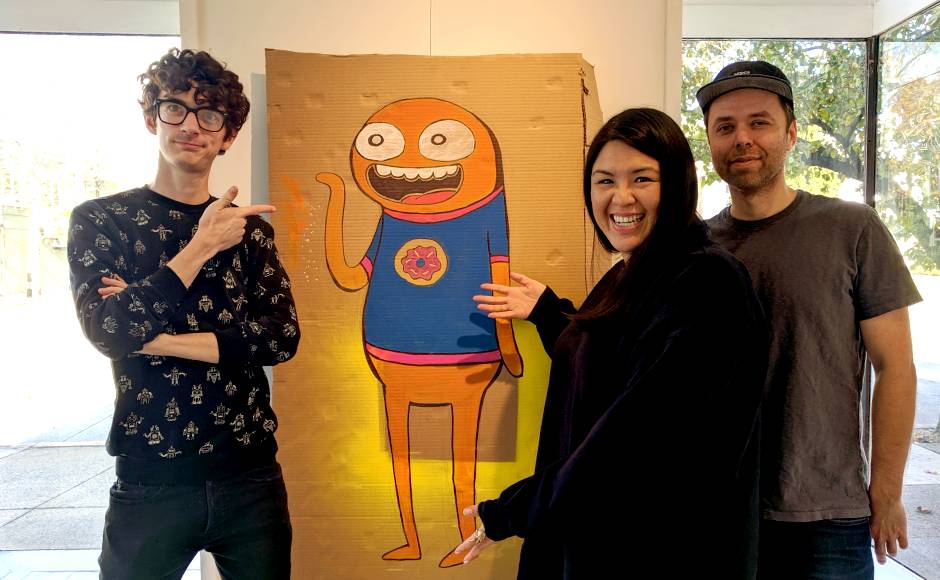 Angerstein wasn’t sure what to do with the creative freedom.

“I said, ‘I guess I could hang stuff up from the cartoon?’

“They said, ‘No—what would you really want to do if you could do anything?’

“I said, ‘I really want to make an interactive cartoon world.’ They said, ‘Let’s do it.’

“I’ve never had this opportunity to be as weird as I am,” Angerstein said.

The protagonists of his show reflect those tensions. Chup is a nervous, green, Muppet-y fellow who’s too straight-laced for the circumstances into which he’s thrust. Lyle, his best friend, is a “chill lizard,” as irresponsible as he is unconcerned with the consequences of his detachment. Both are “big nerds,” Angerstein said.

“They grow into their own characters, and also start absorbing pieces of each other,” he said.

Inviting audiences behind the scenes helps connect them to the finished result, Go said.

“If we don’t put a value on the art that people do, nobody’s going to see it,” she said; “but in order to see value, people need to see behind the scenes.”

“We want people to have a great time, enjoy it, and then also start to see the value of artists and the value of art,” Go said. “It’s not something that just appears; it requires a skillset, dedication, perseverance.”

Angerstein is comfortable walking people through the process. Connecting with the next generation of artists sharpens his techniques; more importantly, it gives them the tools to express their own perspectives, he said.

“And as stupid as Dudetown is and these characters are, I love it.”

Dudetown: a Chup and Lyle Experience will pop up at MK Apothecary, 330 Haddon Avenue in Collingswood, on Friday, December 13, from 6 to 10 p.m. For more information, visit the event page.