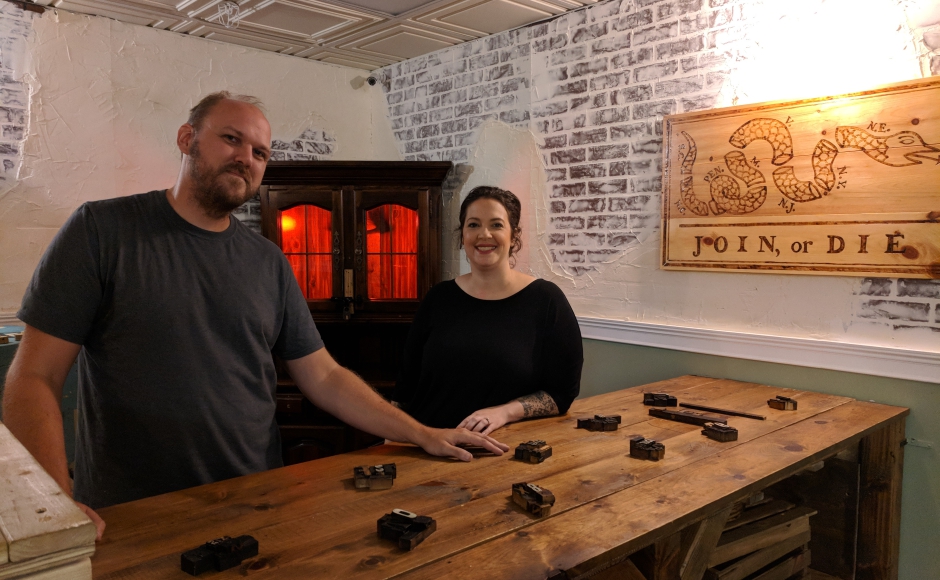 When Anne and Derek Lindeman opened Escape Room South Jersey in downtown Collingswood in 2016, their business model was a relatively novel one.

Within a year, the couple had added a second location on Rowan Boulevard in Glassboro, tripled their room count, and elevated their profile in a marketplace that was starting to catch on.

What’s to do for an encore?

“We opened in Collingswood to see if it would work, and we opened [in Glassboro]  to see if we could duplicate the success,” Derek Lindeman said.

“When it came to where a third place would be, we wondered whether it was time to franchise the business.”

By November, the Collingswood storefront will push all the way out to Haddon Avenue, into the space once occupied by the now-shuttered Nesting House.

The expansion will add a lounge and two more rooms to complement its Wiseguy Lounge and T-Rex Lockdown scenarios. One is to be a wizard-school-themed attraction, and the other is still in development (pirate cave and zombie attack are two heavy frontrunners, Anne Lindeman said). 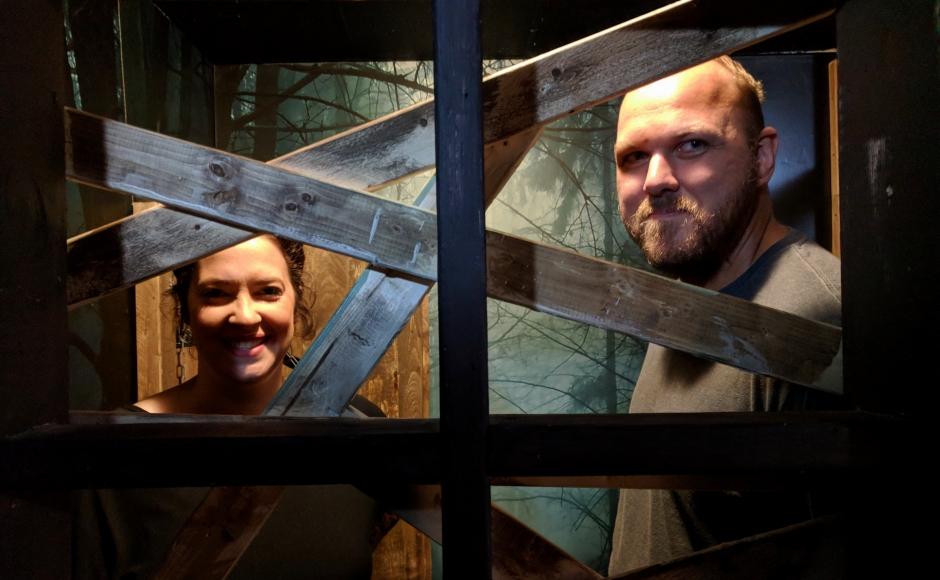 Anne and Derek Lindeman inside the Cabin of the Jersey Devil escape room. Credit: Matt Skoufalos.

Meanwhile, the couple have put down roots above a brand-new storefront on Rowan Boulevard that serves as the four-room “Exit 4” franchise model they’re shopping around.

Current challenges include the Stranger Things-themed Upside Down room, the Law & Order-esque Police Station, Cabin of the Jersey Devil and Ben Franklin’s Inferno.

Each franchise will open two new rooms annually, which the Lindemans conceive and construct in a Pennsauken industrial park studio.

The couple designs the puzzles and challenges in each setting to be theme- and setting-appropriate, virtually indestructible, and able to be completed in a 60-minute visit.

The handmade care with which the Lindemans execute practical effects is a remnant of previous careers in independent film. Their artifice conjures up pop-culture references that place visitors in the worlds they know from their favorite stories—just maybe at the house next door to the main characters’.

“You don’t need to be familiar with the inspiration,” Derek Lindeman said. “[It’s] not recreating something in the real world that you’ve already seen in a movie or book, but having this personal adventure for you.

“It’s your own movie, as far as your memory is concerned.” 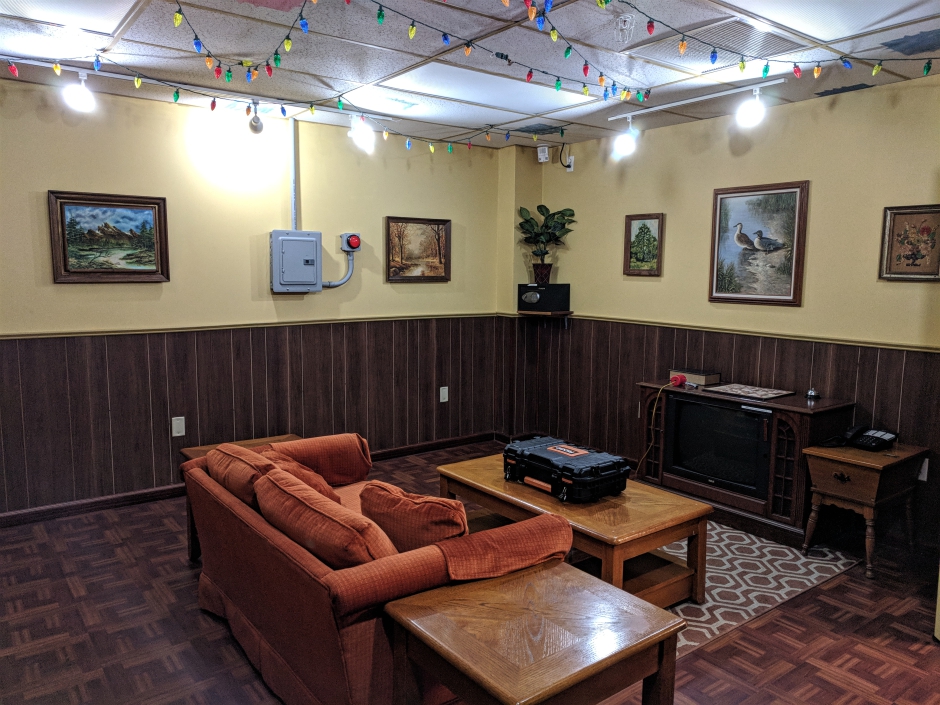 The Upside Down room is inspired by the hit Netflix show, “Stranger Things.” Credit: Matt Skoufalos.

From the props to the atmospherics, the rooms surely have a cinematic feel.

Story arcs—an ever-present, ticking clock, and a challenge or villain to defeat—give guests a sense of accomplishment to go along with the theatrics.

“There’s a lot of stuff that is interwoven into the rooms that leads itself to that complete showmanship aspect,” Derek Lindeman said.

“What we really try to give you is just a good, overall memory, and that does not happen without a finale.”

Sometimes the illusion is so thorough that guests will take a deeper dive into their experiences than the room intends. Visitors who take on the Franklin Inferno, in which they must escape an escalating fire, often ask if the thermostat is being nudged higher during the challenge (it isn’t).

Those are the kinds of moments that the Exit 4 Escape Room brand was built to create, the Lindemans said.

“The frustration that we had with the film industry is that it’s a very old-school way of doing things,” Derek Lindeman said. “It’s still playing catch-up to the way people want to absorb their media. With this, in a way, we can write the book.”

Some escape room models are shrouded in no-spoilers-level secrecy, but the Lindemans aren’t shy chatting about their challenges’ narratives. They don’t mind if guests photograph themselves in the rooms; they don’t send in outside actors to frighten them. The couple believes most of its work lies in broadening the audience for its products. 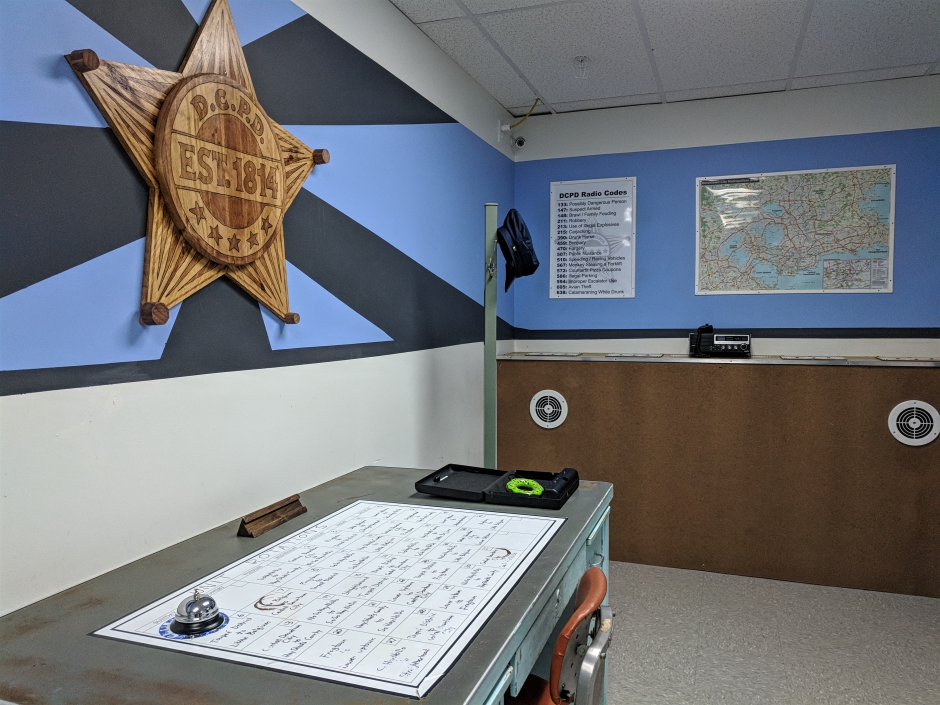 The Police Department room attracts fans of the “Law & Order” TV series, but offers its own gags for fans of police procedurals. Credit: Matt Skoufalos.

“Escape rooms have this stigma of being this Saw sort of thing,” Derek Lindeman said.

“‘Are you smarter than the people who built the place?’

“We’re not so much in the escape room business,” he said. “We’re in the interactive hospitality business.

“You’re looking for an experience, and regardless of what we sell, you make of whatever you want with it.

Based on industry projections for the “experience economy,” the Lindemans think they can expand to as many as 50 Exit 4 locations in five years. By then, they think half the U.S. population will have tried an escape room, as opposed to the 5 percent who have now.

“If there was a fad, the fad would have already blown over,” Anne Lindeman said.

She tracks the success of the Collingswood location to its ties to the local restaurant scene. It’s become a pillar of their approach to the business, so much so that franchisees must open within 200 feet of three different restaurants. 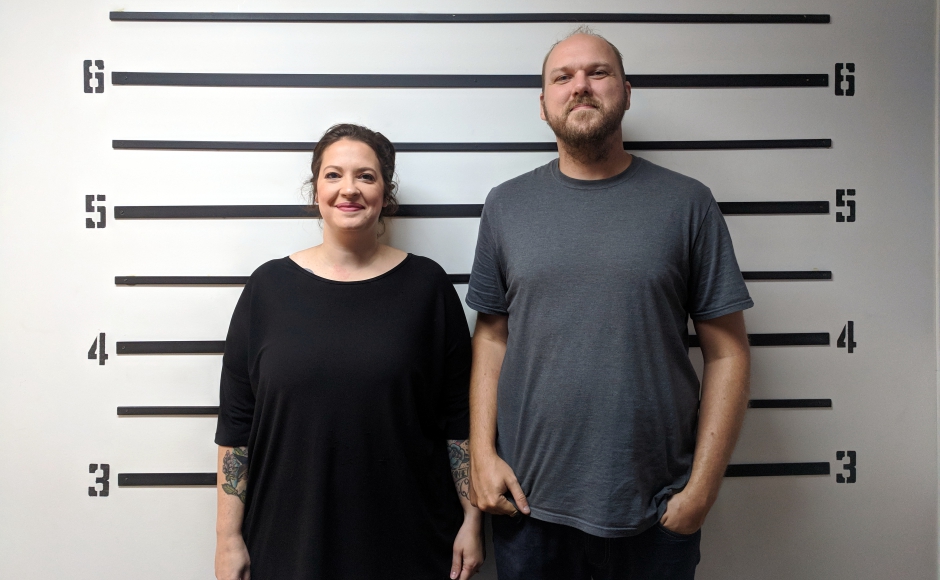 “[Collingswood] is already doing what it is supposed to do,” Derek Lindeman said.

Exit 4 Escape Rooms will have a grand re-opening September 1 at the Glassboro location on Rowan Boulevard.

From 10 a.m. to 11:30 a.m., the facility will be open to tours for prospective franchisees; from noon to 1 p.m., the Lindemans will give away prizes, including an “escape room for life” drawing.