Trending
You are at:Home»Business»Forgotten Boardwalk Brings Brewing back to Cherry Hill

In a bit of symmetry, the same Cherry Hill warehouse that served as the launching pad for one local craft brewery is now poised to see another take off. 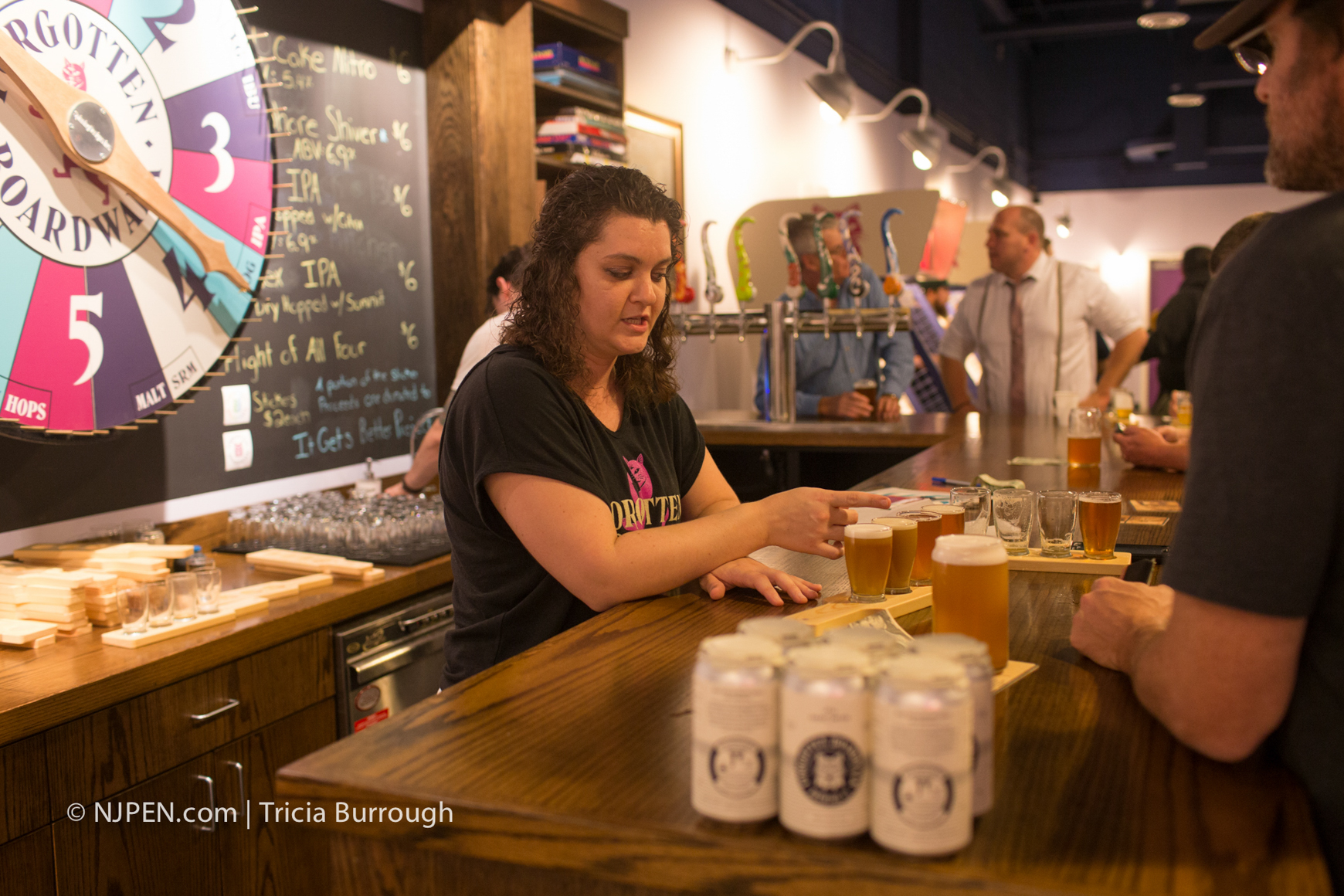 The digs at 1940 Olney Avenue are home to a new tenant these days, but there’s a familiar product being made there: beer.

About all the previous owners left behind was wall space—“The floor is new, the equipment is new, the electric is new,” Bronstein said—but it’s an appropriately blank canvas from which Forgotten Boardwalk may establish its own identity.

Even after seven years with Sly Fox in Pennsylvania, Bronstein confesses that being given carte blanche to build a brewery from the ground up is still an opportunity of which he feels the weight.

“It’s kind of hard having a blank slate because there’s no scaffolding,” he said, “but it’s freeing at the same time. I want to be able to experiment, but make solid beers all around.” 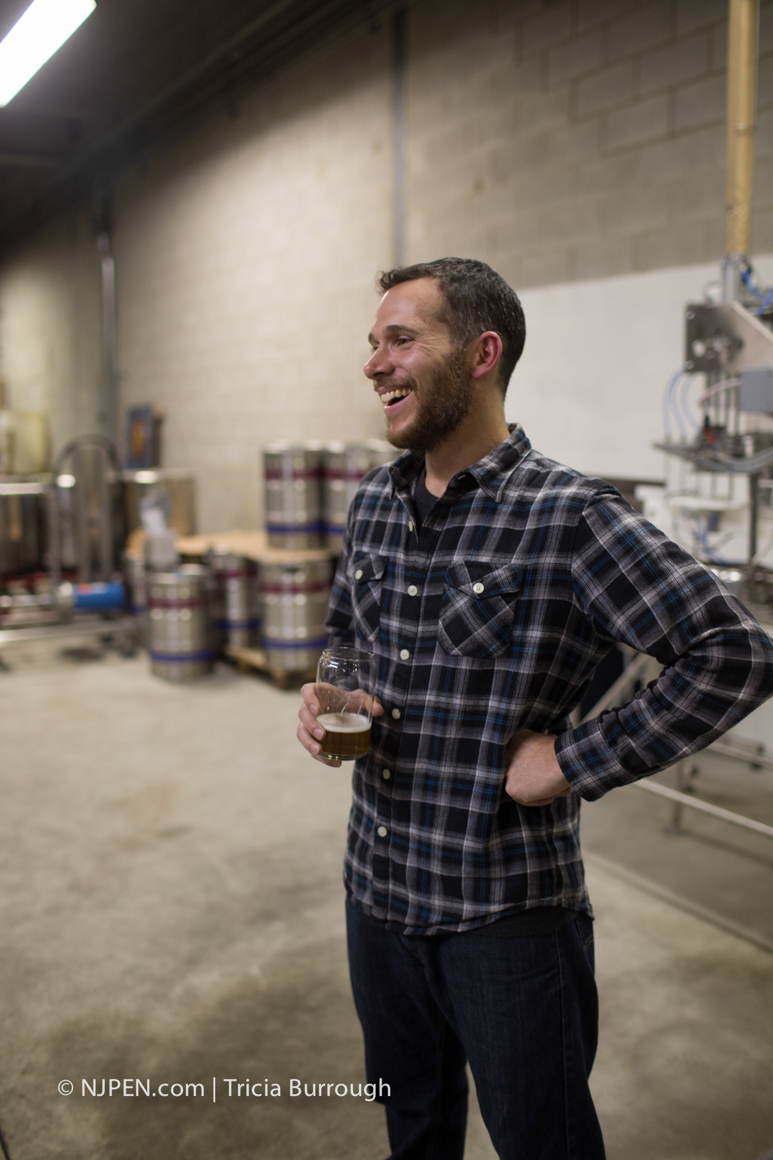 ‘We just want to have a good time with beer’

Stories are part of brewing, and the stories associated with the Forgotten Boardwalk beers are as colorful as their names.

When Bronstein and Queli couldn’t come to terms on whether to brew a witbier or a lager, they settled on a cream ale. Upon tasting it, “funnel cake came to mind,” Bronstein said.

“So did 1,000 pounds of vanilla beans,” he said; thus the duo arrived at Funnel Cake Cream Ale.

“From [funnel cake], we got to Forgotten Boardwalk,” he said.

The Morro Castle Smoked Porter is named after a luxury liner that in 1934 caught fire off Long Beach Island, and eventually wrecked in the shallows near Asbury Park. It burned there for two days unabated, Bronstein said, drawing crowds of gawkers who “picnicked on the beach and watched.

“That’s where I came up with the idea of the smoked porter,” he said; “the porter with his hair on fire.”

The 1916 Shore Shiver IPA commemorates the historic New Jersey shark attacks that influenced the plot of Jaws. Even the Forgotten Boardwalk mascot, a three-eyed cat named Growler, has his own backstory.

“There’s lots of feral cats below the boardwalk,” Bronstein said. “You figure they’ve seen it all; more than most.”

Commercially, the branding effort shows. Growler wouldn’t be out of place in a carnival sideshow, and neither would the turn-of-the-century artwork that adorns the other Forgotten Boardwalk coasters, can labels, and apparel. The brewery’s pastel-colored lounge doubles as a gift shop, with skee-ball, fun house mirrors, and a midway-style wheel of chance. 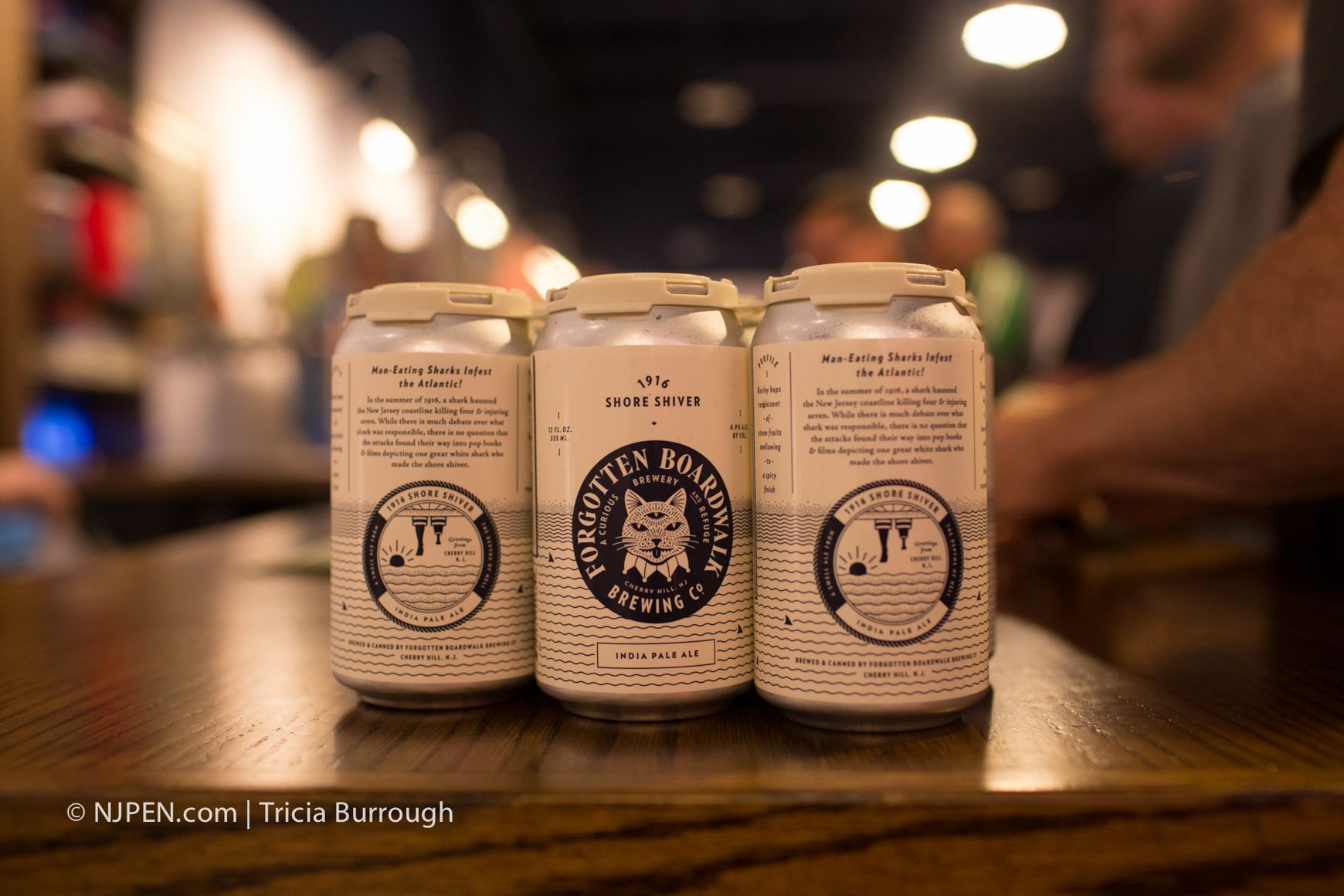 “We aim to be the raconteurs of brewing,” Queli said, even as she admitted, “I don’t know what to expect from this space.

“It’s taking on a life of its own,” she said. “I hope it’s a whimsical, fun place to take a first date.”

But for someone who worked “for too long” in banking before bankrolling this effort, “the whole thing is an experience,” Queli said.

“We just want to have a good time with beer,” Bronstein said.

At the same time, Bronstein said, interest in craft brewing has never been higher, and his independent operation fits right in with the spirit of other, local cottage industries. For example, he exchanges unused grains to a local farmer for use as animal feed; the brewers receive fresh eggs in return.

“I love the turn back to getting down, using your hands, and making things,” Bronstein said. “There’s a whole generation of people who want more.

“Being able to start on a volume where the economy of scale is there, that’s the trick,” he said. “We certainly have the capacity for it.”

Bronstein, who began his career as a home brewer, understands the excitement around the craft as well as the importance of maintaining good relationships with those trying it out. 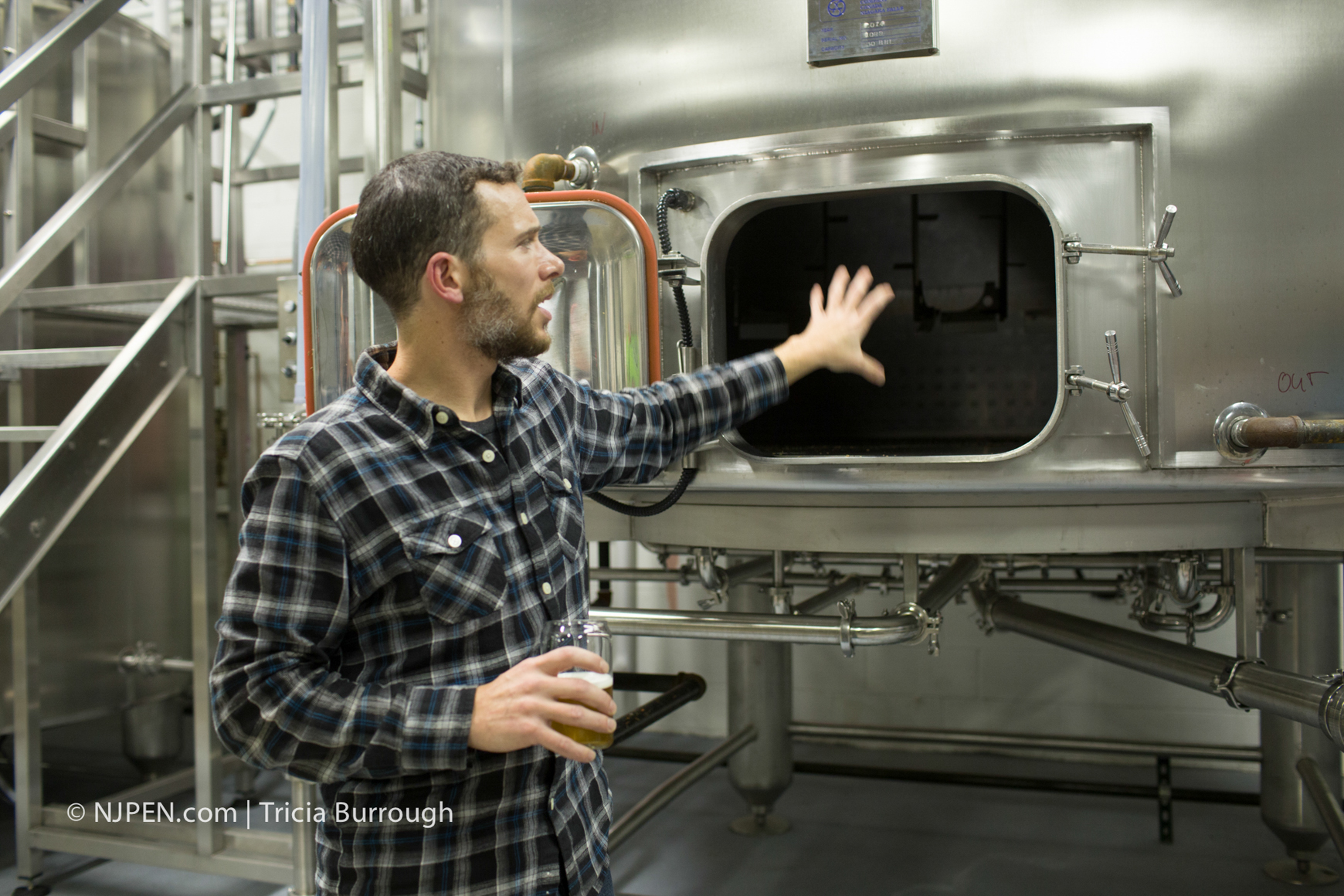 “They’re your best customers and your worst critics,” he said. “The whole community is collaborative. People in other breweries have given me help. Without them, I wouldn’t be here.”

The handmade touch is evident throughout the process at Forgotten Boardwalk. Shipments are packaged by hand, and beer is canned in a machine that Bronstein describes as “boring when it runs well and frustrating when it doesn’t.” Everything is packed, stored, and transported cold to preserve freshness.

Brewing is a six-day process that yields 900 gallons of beer, or about 300 barrels (400 cases) per week. In the first calendar year, the brewery is targeting production of at least 1,400 barrels.

A distribution deal will bring Forgotten Boardwalk varieties to all but six counties in New Jersey by December, with exclusive firkins available at various pubs along the way. The Cherry Hill warehouse could max out at 30,000 barrels per year without stopping production, Bronstein said.

He foresees “a huge opportunity” for Forgotten Boardwalk to make its mark. Even as the local wine movement grows, with agri-tourism and slow food taking on a regional focus, “New Jersey doesn’t have its brewery yet,” Bronstein said. 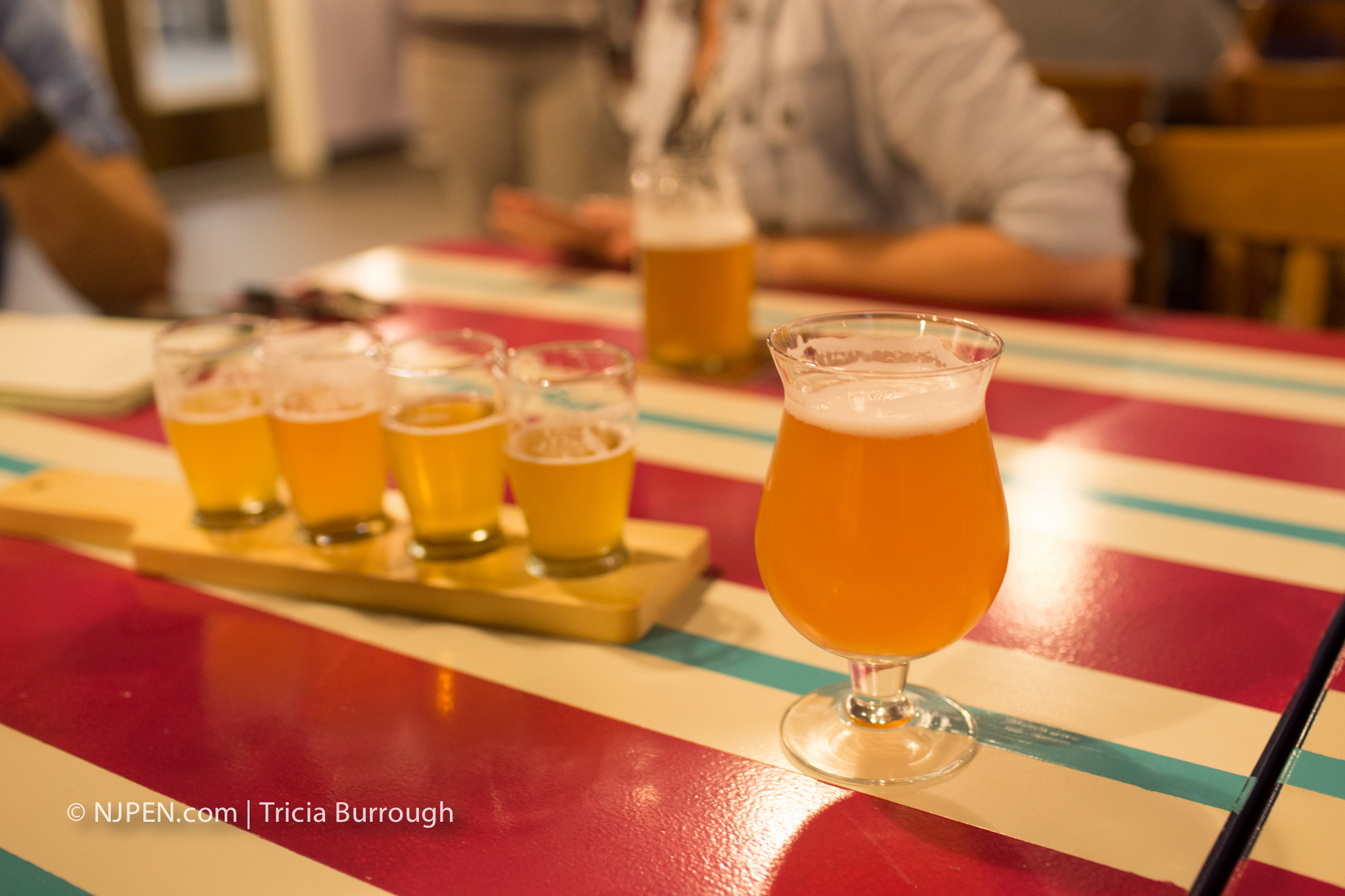 A flight of What the Butler Saw witbier-saison varietals, with a Funnel Cake cream ale. Credit: Tricia Burrough.