In this episode: Winterfell has been preserved, such as it is. But is what’s left enough to bring down the walls of Kings Landing? And will the survivors of last week’s battle even make it that far? 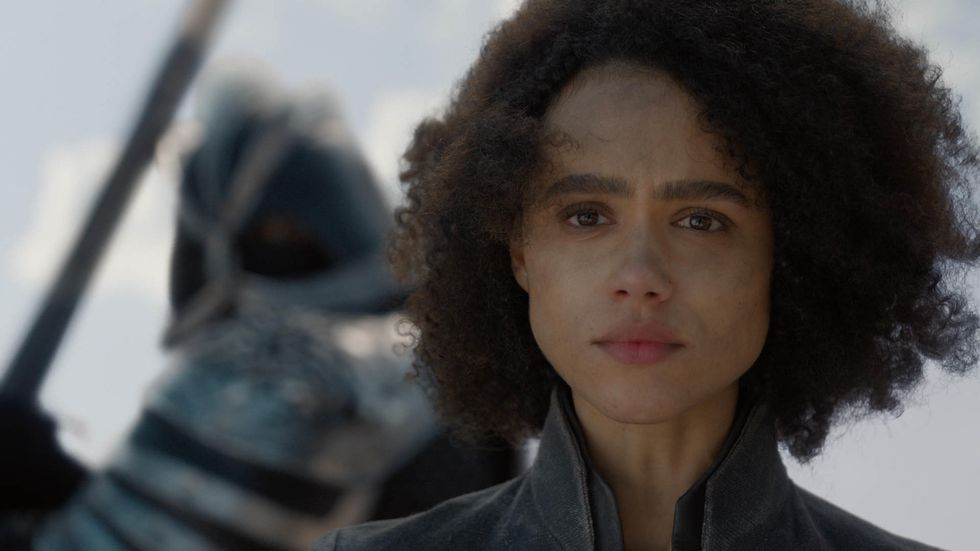 Once or twice every season, Game of Thrones gives us an interstitial episode like The Last of the Starks… one that doesn’t so much tell its own story as it bridges two larger storylines together.

The effect is the narrative equivalent of dabbing your hands into a fingerbowl between dinner courses: it serves a purpose, sure, but it still seems like a silly way to spend your time.

We’re in the lull between cataclysms this week. The eye of the storm. The aah- before the -choo. And while in prior seasons (by which I mean one through six) this would be an acceptable bit of narrative necessity. But with so few episodes left, and so many storylines to wrap up, this week felt downright wooly.

I’ve disliked episodes of Game of Thrones before. But only now, at the shaggy end, have I started to dislike Game of Thrones. Four episodes in, and this season has started to feel like the last hour of Risk! – turn after crushing turn of frustration, impatience, and the dull dissatisfaction of inevitability.

I can see the end coming. The game is nearly up. The thing is… if we’re being honest… I don’t really feel like playing anymore. 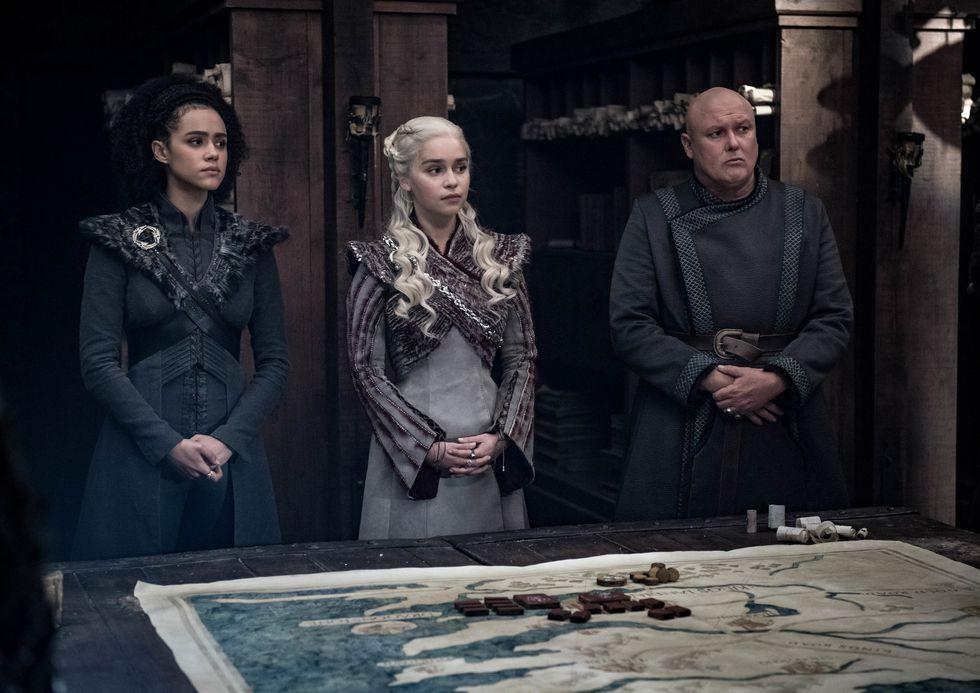 I didn’t talk much about the Night King last week. Let’s start there, k?

If we’re being honest (and I am; I can’t speak for you liars), I didn’t think to write about him because, when you get down to it, there’s never been much to say.

The Night King and his creepy coterie have always been the least interesting antagonists in Game of Thrones (Euron Greyjoy a close second).

Despite being the major threat looming over the story, Team Corpse was never given a chance for exploration, motivation, or depth.

Odd that they’d be given such primacy in the narrative, as Game of Thrones is a story that loves to horse around in far more complex moral ambiguities, conjuring genuine empathy for incestuous lovers, child-killers, liars, brigands, pricks, jerks, and creeps. Despite all the dragons and the magic and the swords and sorcery, Game of Thrones is driven by primal human drama: love, honor, betrayal, resentment, revenge, cowardice, and so on…

So it’s no surprise that a Big Baddie who never speaks, never emotes, and is motivated purely by the desire to stab a guy in a wheelchair is a bit of a narrative letdown. Not only is he boring, he runs counter to the entire approach the show takes to telling its story.

Last week was the culmination of that rather underwhelming storyline. After eight long years, the Long Night finally came. And then, unexpectedly, it went, leaving not only the characters, but seemingly the writers and directors with an itchy sense of, “Okay… well… now what?”

What do you do when you survive the end of the world? Apocalypse? More like ApocaLAPSE AMIRITE (I’m sorry).

This is the question that drives the action for the first half of The Last of the Starks. And in the asking, the episode is reasonably successful in examining the things that make Game of Thrones interesting—namely the characters, their interactions, and their interiority.

The answers to that question, however, are another story altogether. Or, at least, the beginning of one. And, unfortunately, not a very good one. 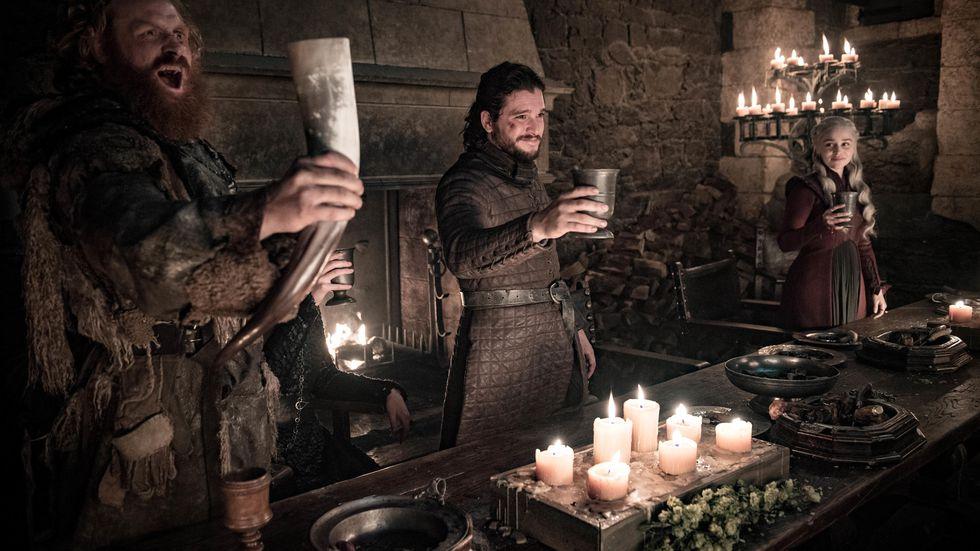 Come on Baby, Light My Pyre…

We begin the episode by bidding a final farewell to the characters we lost last week.

The survivors have heaped thousands of their compatriots into ziggurat-sized pyres which answered my less-than-sensitive question: what poor son of a bitch is gonna get stuck digging all those graves?

Still, it’s a fittingly somber moment seeing all those lives go up in smoke.

Cut to later that night, in the Irish Wake portion of the evening, and the mood is starting to thaw a bit. Inside Winterfell, the candles aren’t the only things burning. Full up on wine (and, I dunno, mutton?) the survivors swap their goodbyes for howyoudoin’s, as they partner up and slink off in search of the nearest ruttable surface.

There are worse ways to grieve.

You can actually track the mood as it changes throughout the night as everyone drinks and remembers that there are still things worth living for… namely necking, wine, and truth or dare. We jump around the greatroom, checking in on our faves… Tyrion, Jaime, Tormund, Pod… it seems everyone is having a good time except Dany, who casts her eyes around the room gloomily, wondering why nobody wants to come sit with her.

In all fairness to her, I’m not great at parties, either.

She sees how freely people come to Jon; how they tell tales of his derring-do with such gusto they spill their wine. She’ll never have that kind of support up North. Partly because the North is peopled with bitter, skeptical, and racist jerks. But mostly because she’s the absolute worst.

Dany has begun to see Jon not as an ally, or a paragon… but as a threat. He has the people. He has the name. He has the legitimacy. So where does that leave her?

She finds Jon, drunk, dizzy, and alone in his room, and attempts to rekindle that old familial familiar feeling. But she’s hardly two words into her pitch before the real subtext comes pouring out.

Do not tell your family about your lineage… or I will hurt someone.

It’s a harbinger of more than just the end of their romance, but even the beginning of their rivalry.

I’ll be brief about this because I’m trying to focus on the parts that worked this episode, and their storyline is a whopping disappointment.

Here’s the thing: I’m glad for them. Especially her. Gwendoline Christie plays every moment with genuine tenderness and vulnerability. She’s a stunning actor. And as much as I may love the Tormund and Brienne ‘ship (sailed, I’m afraid…), I’m rooting for Jaime and Brienne to evolve into something more romantic. Rather, I would, if the episode had given it the time it deserved.

As it stands, the two only had a few moments on screen this week, nearly all of them focused around the bed. And the problem is, their sexuality isn’t nearly as interesting as the vulnerability of two people terrified to love anyone, let alone each other.

This story should be explored over episodes; hell, a season. How do they, after all this time wrestling with their fear and pain and want for each other, actually learn to be together? But we don’t have time for that. Instead, we’re given roughly five minutes of skin by firelight… and as such, it feels more like fanservice than storytelling.

The shallowness of their union undercuts Jamie’s abandonment, and Brienne’s renewed sorrow. He just looks like a jerk, and she’s left whimpering in the courtyard like a bobbysoxer. It’s all handled as rushed and sloppily as a one-night stand.

Those two kids deserve better. We all did. 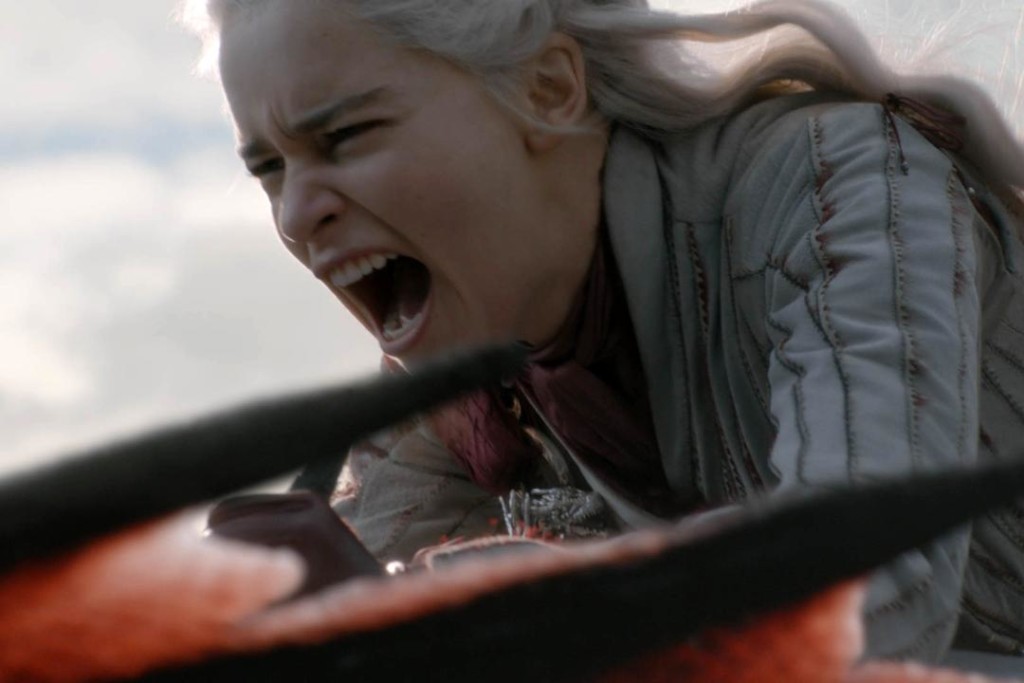 With the walkers gone, and Winterfell on the mend, Dany’s quick to renew her call for hostilities against the crown.

She expresses this at a war council, where she again proves herself a dreadful leader, narrowing her eyes and blowing smoke from her nose when Sansa sensibly reminds her that their forces are exhausted, broken, and in need of R’n’R.

Heedless of Sansa’s suggestions, Dany and her boys set off for Dragonstone, while the rest of her army sails and marches south.

The poor darling clearly didn’t watch last season, and doesn’t know about Euron Greyjoy and his timey-wimey TARDIS navy, able to circumnavigate the globe and pop in and out of existence whenever the plot requires it.

There they are, just sailing along, one happy family in the clouds, and three giant ballista bolts later, Rhaegal is pierced and skewered and crashing into the ocean. It’s a scene clearly played for shock value—and, I mean, mission accomplished—but there’s something wholly unsatisfying about losing a dragon so quickly. I’m probably just bitter. Underdeveloped though Rhaegal may have been (he was the green one, right?) I still hate watching dragons die.

Having successfully dropped a dragon, Euron and his navy fix their aim on Dany’s ships, and, one by one, they too are pierced and sunk. By the end of the assault, Dany’s down a navy, a dragon, and, as it turns out, a best friend. Somehow, through the fray and fracas, Euron managed to scoop up Missandei and spirit her back to King’s Landing.

All of this is done, it seems, to spur Dany toward her darker purpose, and lure her into napalming the city. And I won’t lie, it’s a smart strategy. Especially if you’re a miserable, Trumpian virago like Cersei who not only doesn’t care about her people’s welfare, but actively wishes them harm.

Cersei hasn’t spent the intervening weeks farting around. She’s used that time wisely, and when Dany finally comes to call on King’s Landing, she finds it nigh-impregnable, its walls bristling with the same ballistae that felled Rhaegal, its barracks overrun with mercenaries. Dany had followed Varys and Tyrion’s advice to tread lightly: to offer Cersei the chance to surrender. But what she finds is a fortress. And there, at the top of it, Missandei.

The scene that follows is just… awful. I liked Missandei. Rather, I liked her as much as I could, considering her dearth of development. But she was kind, and loyal, and sweet, and in love. And that’s exactly the kind of character Game of Thrones delights in murdering.

In the end, her character died as she’d lived: in brutal service to the plot, somewhere in the background, without focus. And her final words mark our expectation for next week.