Led by Collingswood artists Erika Tsuchiya-Bergere and Lowell Boston, the yearlong project turns the historic Philadelphia jail into a canvas for screening short films from incarcerated men and women. 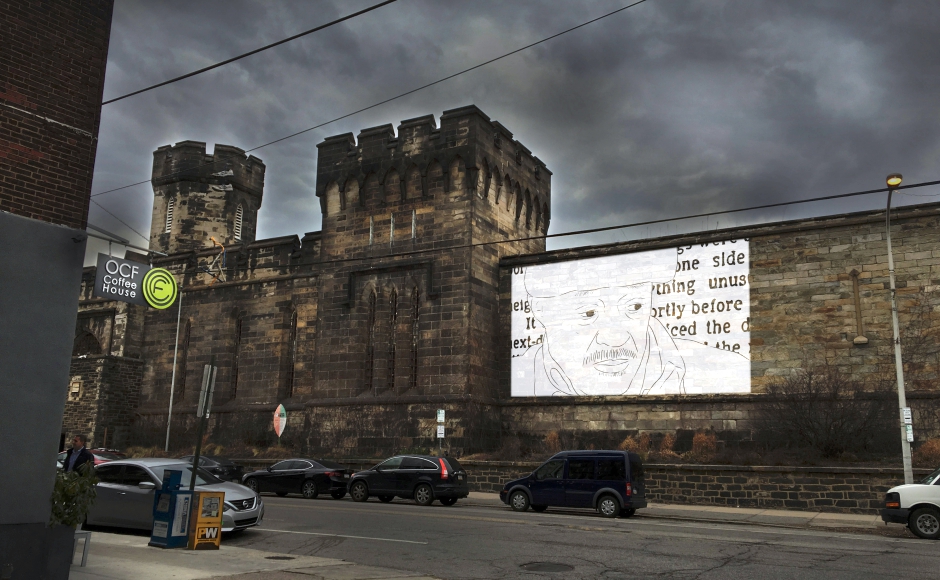 “There are populations and people in society who have voices that are just out of sight, out of mind,” said artist Erika Tsuchiya-Bergere.

“They’re there, and they’re people; they need that connection to socialize,” she said.

“As humans, that’s really what you need to live.”

From the summer of 2018 until the spring of 2019, Tsuchiya-Bergere spent a few hours a week working with some of those people, helping them find their voices from deep within the Pennsylvania penal system, and amplifying their messages for an audience they may never meet.

The Collingswood resident, a part-time film instructor at Rowan University, was the lead teaching artist on “Hidden Lives Illuminated,” an art exhibition produced in collaboration with Philadelphia’s Eastern State Penitentiary.

Together with fellow teaching artists William Wallace, III and Lowell Boston, Tsuchiya-Bergere worked with 20 inmates at SCI Chester and 15 from the Riverside Correctional Facility for Women to produce a series of short films that tells their stories.

The movies are projected onto the exterior of Eastern State Penitentiary, a historic correctional facility that now operates as a museum, nightly through September 12. With subjects as varied as their creators, they describe life in prison, expressions of love and regret, and meditations on family and art.

To get the project off the ground, Tsuchiya-Bergere modified the syllabus from her film production class to include “the building blocks of art.

“None of the students came from an art background, so we had to start with basic drawing, figure drawing, color theory,” she said. “They were really intelligent and super-dedicated students; really determined to complete the project.”

The students spent a good two-and-a-half months writing two-minute scripts with support from a playwright, screenwriter, and voice acting coach. Boston, who is also a Collingswood resident, taught the students about the history of animation. Filmmaker El Sawyer of MING Media, himself a former inmate, documented the process. Guest artists assisted with the finish work. 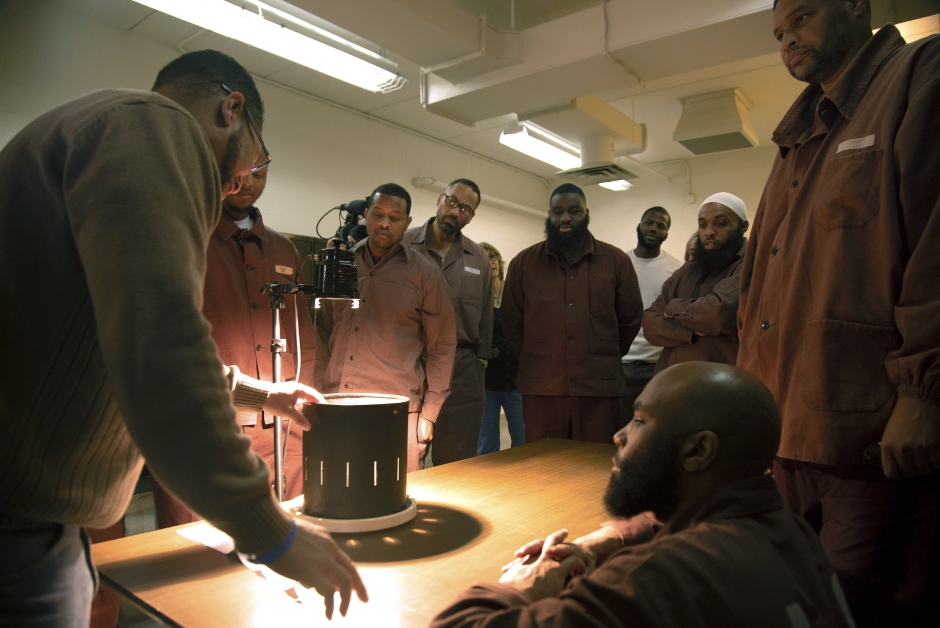 Project lead and Eastern State Penitentiary Senior Vice-President Sean Kelley got the idea for “Hidden Lives” from “Stories From the Inside/Outside,” a 2015 art installation produced by Illinois inmates and projected on the exterior of the Cook County Jail.

“Animation, however, frees up the filmmaker,” he said.

The elements of working within a prison to create art are apparent in the work.

Voiceovers are tinged with a slight echo, the byproduct of audio recording within the hard surfaces of a jail. (Stacking yoga mats against the walls to muffle the sound can only do so much.) However, to Kelley, the sounds of the prisoners’ voices are almost secondary to the messages they’re delivering.

“When you see these films, what really makes them shine is the scripts are so lovingly and carefully written, with such discipline, and they’re so spare and so simple,” he said.

“What you’re hearing is the voice of someone recorded in a prison saying something very meaningful that they’ve thought about, work-shopped, and brought about with a very talented voice coach.”

At the end of the project, the teachers held a graduation ceremony for their students. For Tsuchiya-Bergere, it was a curious parallel of her experiences as a professor, and one she hasn’t fully processed yet.

“[In college], you kind of attach, and then at the end of the semester, you say goodbye to your students, and they go off and get jobs,” she said. “In this situation, it’s hard to let go and detach from the students because I can’t let them go in the same way. I’m the one who leaves. That has been really difficult.”

Some of the students with whom Tsuchiya-Bergere worked had been incarcerated for decades; a few were seniors who had been in jail since their teenaged years. One left before the program concluded; others will never be released. Among them all, she gained a sense of the lives they lead within the internal community of the correctional facilities she visited.

“It’s like a town,” Tsuchiya-Bergere said. “The blocks are literally like neighborhoods. There’s 1,200 inmates, and the correctional officers, and the prison staff. It’s a facility that runs 24-7.

“A lot of the students in Chester and Riverside are parents,” she said, “and a lot of them have been away from their kids for the 20 years that they’re growing up; missing out on these important milestones of your family, and even deaths in your family.”

The theme of family is especially apparent Piano Priest, a 98-second short from inmate Justino G. with a musical performance by his 15-year-old son, Justin. It’s Justino’s voice that carries over black-and-white footage of his son performing; Justino’s hand that animates sections of the screen so they pulsate with color.

Although it has been painful to endure Justino’s incarceration, the struggle has not prevented the family from maintaining a tight bond, his wife, Sharon, said.

“We discuss everything,” she said. “We don’t make decisions unless we talk about it as a family as a whole. It becomes frustrating to see a loved one in this type of predicament, but I’ve learned how to accept it, and that’s saving a life. That’s how we look at it.

“[Jail] was a part of [Justino’s]  journey,” she said. “We just didn’t think this journey was going to go this long.” 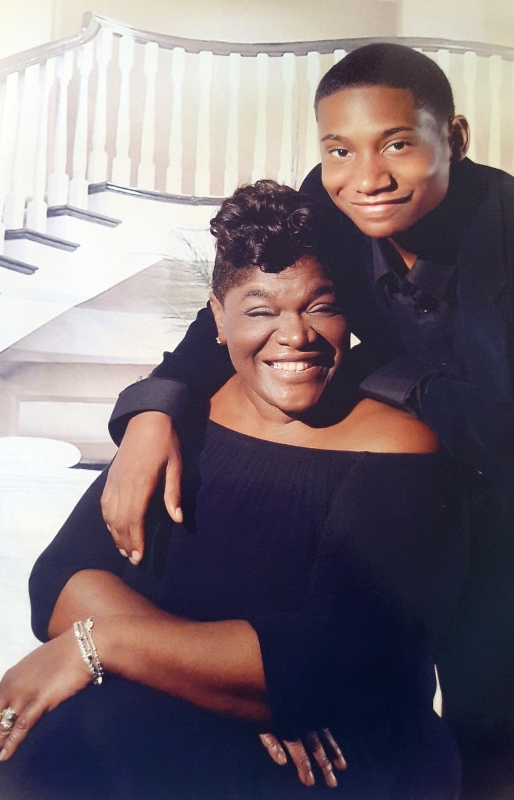 Thanks to a change in mandatory minimums that was handed down during Justino’s sentencing, a 10-to-20-year incarceration has stretched to a 15-to-30-year stint, which the family is still appealing.

When the opportunity to participate in the Hidden Lives project presented itself, “it really took our minds off of what we were dealing with trying to fight it,” Sharon said.

But even she wasn’t prepared for how much the short film he made for—and with— their son deepened their relationship.

“Justino is an amazing human being,” Sharon said.

“When we visit him and look into his eyes, I don’t see his number,” she said.

“When I saw his project on Justin, it was truly a love story between a father and a son. The adoration that they have for each other is amazing.

“And this is why I don’t understand why people say you can’t parent from behind bars,” Sharon said. “[Justino]  is an excellent father, an excellent parent. He talks to [Justin]  right from where he is. The film he did, it tells it all.”

Piano priest, continue to fill this world with your intrinsic melody
Your music lives in me
I’m so very proud of you, son

“To see the look in his eyes, to know that he is a part of something so great and extraordinary; words can’t describe the way he’s been feeling, and the way our family and friends have approached this whole project,” she said.

“I’m glad that I’m able to speak on my husband’s behalf, and not just him but every inmate,” Sharon said. “They have lives they want to live, and a lot of them are changing. You can look at them and see that this project has brought about more reflection on who they are as people.”

As meaningful as it has been to participants, their families, and the audiences that have absorbed the work, “Hidden Lives” isn’t just about bringing the voices of the incarcerated to the public through art, Kelley said. It’s part of a broader shift in the mission of Eastern State Penitentiary to be more than a museum of history. The evolving objective of the facility is also to interpret the history of American criminal justice reform.

“We want to talk about how we got where we are in the American justice system today and where we’re going,” he said. “Prison walls don’t just keep the prisoners in, they keep the public out. We wanted to use our prison walls to connect people.” 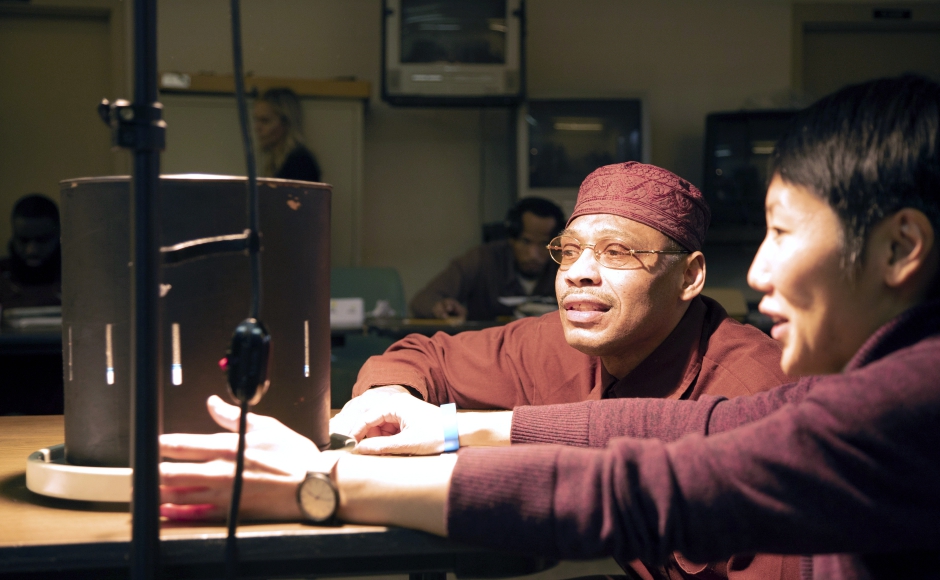 This isn’t the first foray into such efforts from Eastern State Penitentiary.

The facility has made larger art installations in 2014 and 2016 that offer insight into the state of the American penal system and those incarcerated by it.

For Kelley, the opportunity to help transmute their experiences into artwork that reaches an audience they’ve never met has value to everyone connected with the project.

“People keep asking me if we see this as a rehabilitation project, and it never even occurred to me,” he said.

“There are people up there to do that work, and that’s not us. We are a museum. There’s only so far we can take this conversation without bringing in some perspectives we don’t have.

“I consider the filmmakers on this project my coworkers,” Kelley said. “We need their help to make thought-provoking projects for the public. It has been very hard, but so rewarding to see these films up there on the wall. You hear the audience cheering in the end.”

“Hidden Lives Illuminated” runs through September 12. Five films are shown daily, with screenings at 7, 8, and 9 p.m. For details, visit the event page.