The conditions of homelessness are resolvable with political will because housing is more cost-effective than hospital care, says Camden physician Jeffrey Brenner. 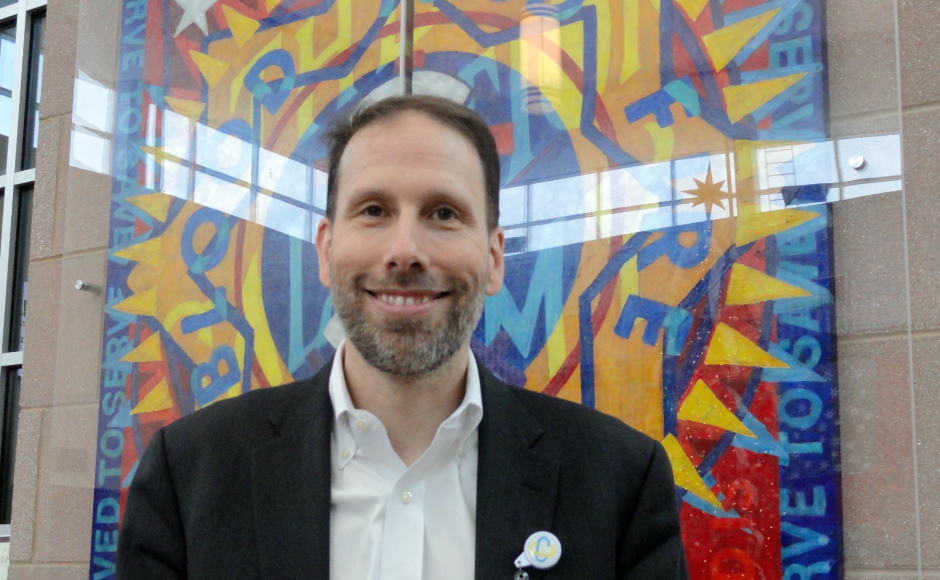 To Dr. Jeffrey Brenner, homelessness is a nuts-and-bolts issue, not a theoretical one.

And like other technical problems, he believes there’s a technical solution that can resolve it.

But tramping through abstract and muddy emotional waters to get to that very approachable bottom line requires the political will to rethink the way America treats its most vulnerable populations.

“The current model is to take very sick, [medically]complicated, homeless people and offer them a homeless shelter bed,” Brenner said.

He called it “the equivalent of bloodletting” in a surgical age. In addition to inadequately addressing the root causes of homelessness, shelters can exacerbate the problems of the people they’re trying to help.

“We’re not changing lives in the current model,” Brenner said. “People with frequent utilization [of public health services]have [often suffered]frequent sexual and physical abuse as kids. Taking someone like that and putting them in a shelter is terrifying.

The chronically homeless comprise about 25 percent of all emergency-room visits in Camden City, according to data Brenner’s Camden Coalition of Healthcare Providers has gathered, making them among the most frequent users of Camden City hospitals. At $10,000 per emergency-room visit, their utilization of healthcare services is disproportionately expensive within the system.

Instead of spending that money to treat and release patients with conditions that are not alleviated in the ER, Brenner said the region needs to focus on getting them housing and “wraparound care” so that they can become self-sufficient.

“This is an example of how we medicalize and criminalize social problems,” he said. “We need a smarter, more robust, data-driven social solution.” 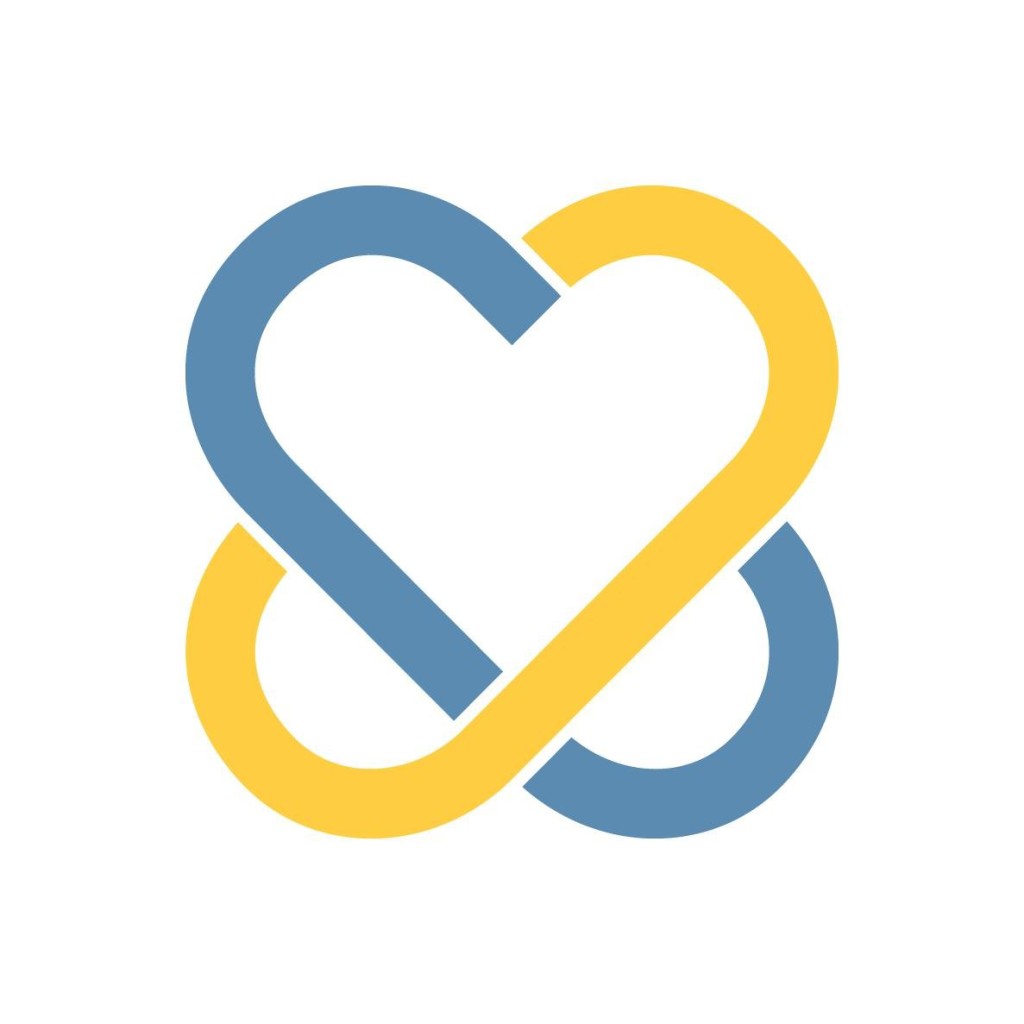 Brenner’s alternative proposal is modeled on a national program called Housing First. About $500,000 in federal, state, and private funds have been marshaled to launch a pilot version of the program in the tri-county region.

Services are delivered at the pace of the client, and after as little as six months, most clients show “dramatic improvement,” Brenner said. Data on similar programs throughout the country show that 90 percent of Housing First program participants are able to find permanent housing through the program, as opposed to 30 percent who are able to do so after having been housed in homeless shelters.

“They look better, they feel better; they have gotten into the habits of life in an apartment,” Brenner said. “We see a tremendous drop in their stress. They’re returning back to something that they knew. [When] folks have houses, they have lives.”

Many Housing First program clients are eminently employable, and with vocational support, can find and keep a job. As Brenner points out, “it takes a lot of talent and wherewithal to live on the street.

“The ones who didn’t have skills died,” he said. 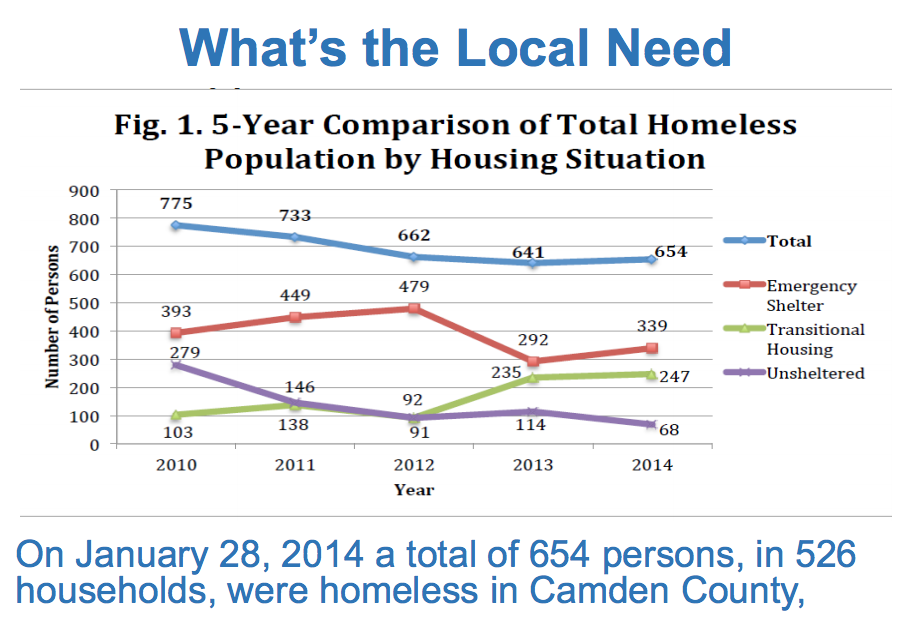 From the intake data he’s gathered, Brenner said the problem is less expensive to address than it might seem.

He estimates some 600 to 1,000 chronically homeless people live in the region, about 200 of which are the frequent healthcare users. It costs about $1,500 a month to house and treat one such person: $700 a month for housing, and about $1,200 for the additional services.

That model can be scaled up on volume, driving down costs by increasing the patient pool while providing sustained, in-home care to treat mental and behavioral issues—care that it is inefficient to seek from hospital emergency rooms.

“Addiction and mental illness are expensive to society,” Brenner said. “It’s cheaper to treat these issues. Do you really want folks to keep living like this? If you want them to stop hurting people and hurting themselves, you have to take a different approach.”

Brenner is in the position of bringing a dollars-and-cents approach to conversations that are not often improved by reasonable arguments. Outreach to people existing at the fringes of society is often couched in terms of removing a threat. The homeless are frequently victims of abuse because they are anonymous.

Brenner argues that we should remember such people may have been our former neighbors and family. The question people should be asking when they encounter a homeless person isn’t “What’s the matter with you?” Brenner said, but “What happened to you?” 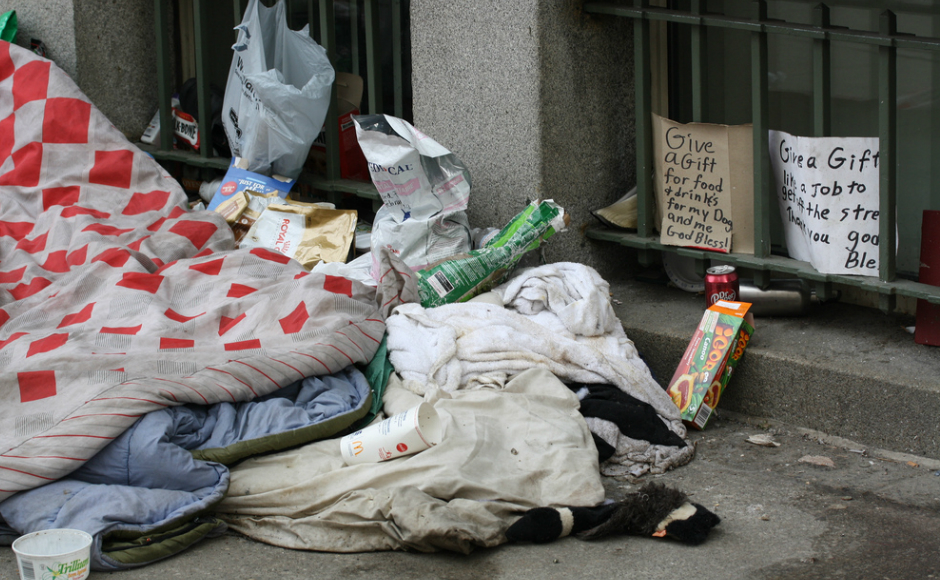 Addicts, who exhaust those closest to them first, can provoke similarly unsympathetic reactions, especially when relapses are regarded as “a personal failure,” Brenner said.

“We need to reframe addiction as an unremitting, chronic illness that’s treatable, [and]that will have relapse,” he said. “Almost all addicts relapse. Relapse is normal.”

The presence of the homeless has also become a political football amid a national conversation about whether America should receive war refugees if it already neglects its veterans, which account for some 20 percent of the homeless population. Brenner sees that argument as a false dichotomy that is symptomatic of the failings of traditional approaches to homelessness and behavioral health.

“If someone has had trauma as a child, and then goes off to war and has compounding trauma, they’re highly likely to end up with substance abuse, mental illness, and homelessness,” Brenner said.

However, “that triad is now treatable and curable,” he said, with “a mix of really good case management, high-quality health and addictions services, and Housing First.”

New Jersey is “a small, suburban state” that doesn’t like to address “any problem that’s got a veneer of urban-ness to it and of poverty to it,” Brenner said. But to resolve these issues requires the acknowledgment of the voting public that “we all have a stake in this.

“I need [people]to urge their public officials to support the programs,” he said. “I need them to educate their neighbors that homelessness is curable.” 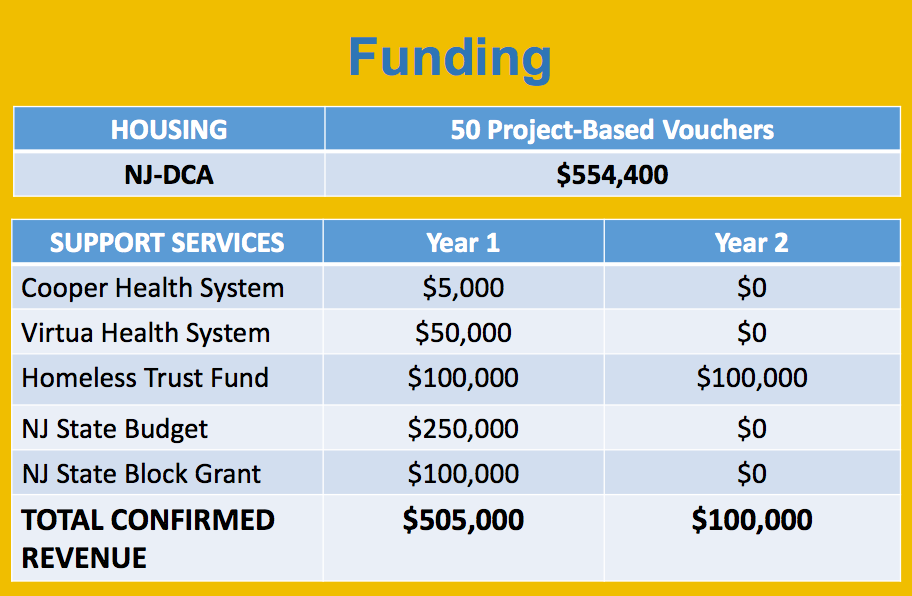 Carise Mitch, Senior Program Manager for Communications at the Camden Coalition of Healthcare Providers, said the shift in thinking that can resolve homelessness requires people to understand that a program like Housing First is a better use of healthcare and social resources.

“You can have a big impact by working with a small group of people,” Mitch said. “These are the people with the most needs, so it makes sense to focus the most resources on them.”

The American tradition of caring for vulnerable populations has historically been to deliver and pay for physical and mental health services separately, which creates a “fragmented system [that]doesn’t serve whole human beings,” Mitch said.

“The problem in separating physical health from mental health is that my mind is in my body,” she said.

Housing First placed its first three patients in November, and has another 47 more to house immediately, which Mitch considers “a big piece” of the puzzle. The bigger piece, however, remains installing the model as a normative model, she said.