Trending
You are at:Home»Business»In the Kitchen or on the Page, Nick Elmi Won’t Rest on His Laurels

The chef’s debut cookbook takes readers through a year in his Philadelphia kitchen, where being ‘inherently nice’ and willing to learn are fundamental components of excellence. 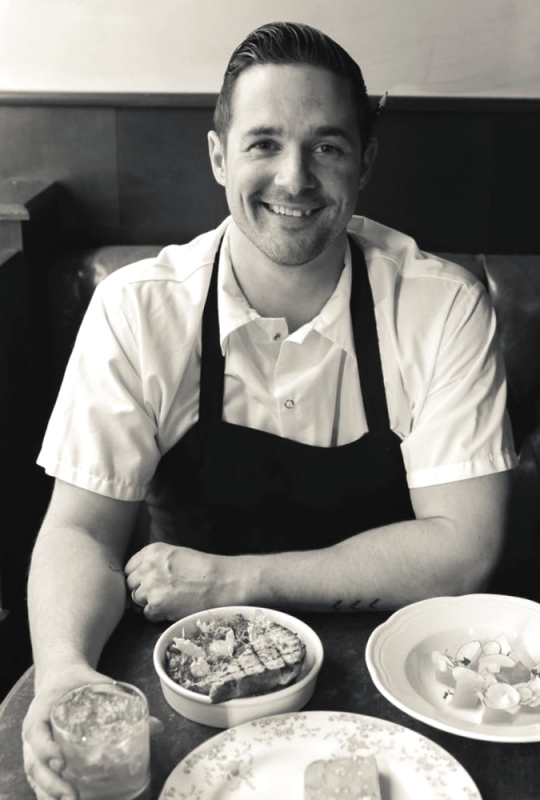 Within a year, so had King Georges, an intimate documentary about the last days of Le Bec-Fin; Elmi’s relationship with volcanic French luminary Georges Perrier provided its emotional core.

“We had to stay on our feet and make changes quickly, and ramp up very, very fast,” Elmi said.

“It drove the success.”

In 2016, he pushed into the property next door, opening In the Valley (ITV), a bar program with high-end snacks, as a complement to Laurel’s 22-seat dining room. A year later, Elmi launched Royal Boucherie in Old City with David Frank and Stephen Simons; LaBan responded with another three-bell review (and a four-bell revisit of Laurel).

With his meteoric rise so thoroughly (and publicly) documented, Elmi was uninterested in making his publishing debut “very long in the tooth up front.”

“I’m a relatively private person, and I didn’t have a fantastic backstory about getting into cooking,” he said. “I’m one of those people who really likes his job.”

Instead, Laurel: Modern American Flavors in Philadelphia, is a cookbook that, like Elmi’s restaurants, is local and seasonal first. In it, the chef, cowriter Adam Erace, and photographer Neal Santos tell the story of a year’s worth of cooking in a city that’s emerging as a national culinary destination.

“We’re not giving away all our secrets because we don’t really have any,” Elmi said. “We just try to keep moving with the seasons.” 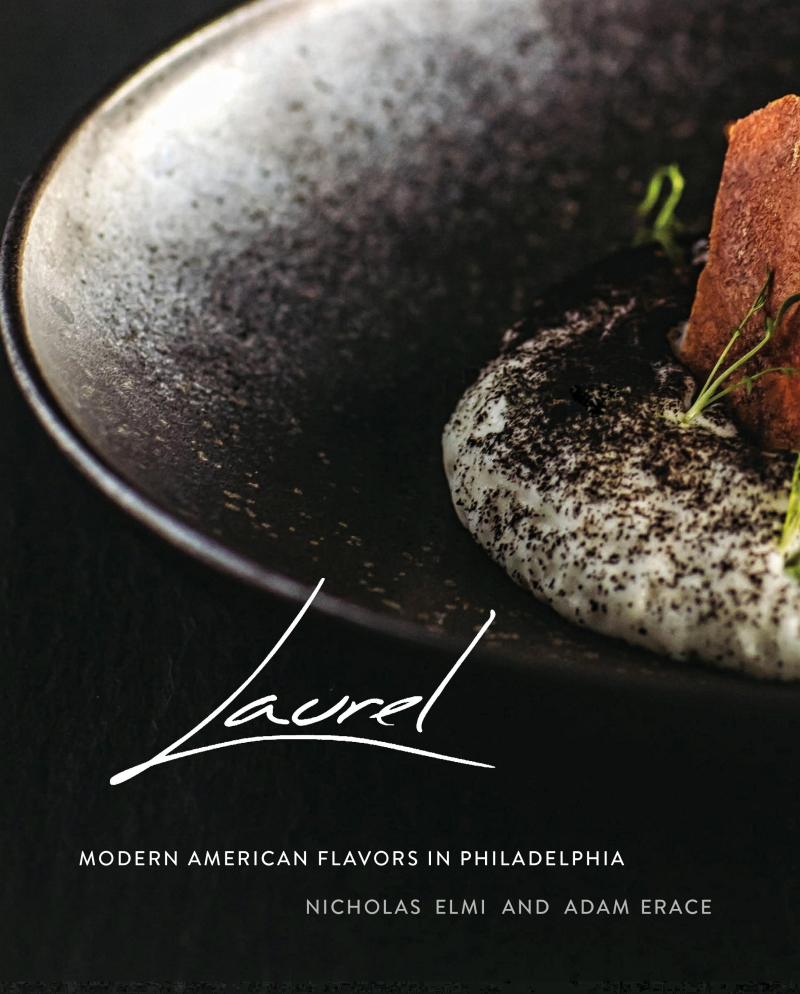 Recipes turn on indigenous ingredients—even if pawpaws, knotweed, and daylily shoots might not make the typical shopping list—offering insight into a kitchen that aspires to be “creative without being obtuse.

“We want to do something new and something different, but we also understand that people just really want good food,” Elmi said.

“They still need to be able to connect with it.”

At Laurel, the solution is to pair the eccentric with the approachable.

Try them covered in basil, topped with brown-butter hollandaise, in a porridge of nuts, seeds, and grains.

On the fence about sea urchin? Elmi can ease you into its creamy sweetness with a triptych of corn prepared three different ways.

“We try to make everybody as comfortable as possible, but we try to take them a little out of their comfort zone,” he said. “How do we make it beautiful? How do we present it in a way that people haven’t had it before?”

Six years into its life on East Passyunk Avenue, the seasons have turned for Laurel as well. Elmi’s given the South Philadelphia rowhome an interior “refresh” just in time for the book release, and things in the kitchen are turning over, too.

After a decade, Eddie Konrad, Elmi’s compatriot from his Le Bec-Fin days and his right hand at Laurel, is preparing to strike out on his own. Konrad also enjoyed a little run on Top Chef, and Elmi encouraged him to leverage the opportunity, however bittersweet their parting. 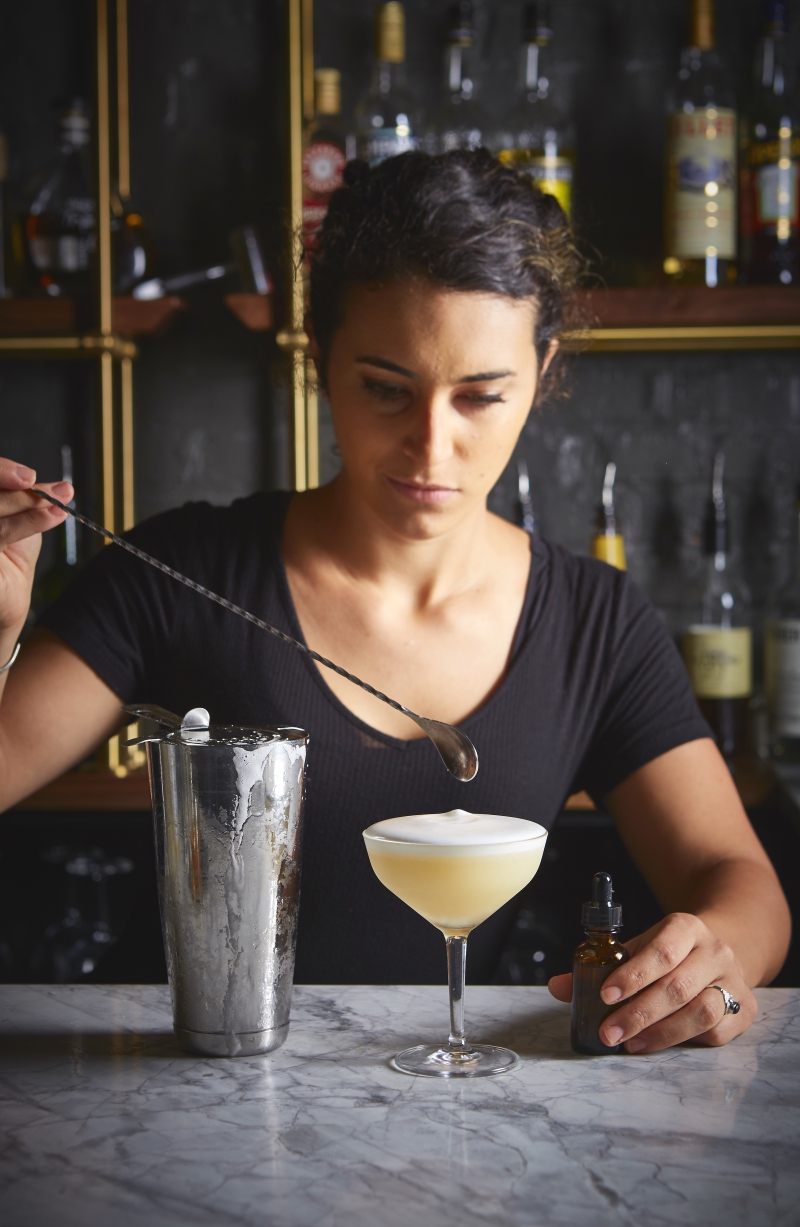 ITV is the companion to Laurel’s BYOB. Credit: Nick Elmi.

The 32-year-old Beninato has the maturity to lead a kitchen, strong opinions about what  food ought to be, and the ability “to step up and challenge me,” Elmi said.

“It was difficult to find somebody who understood what we did and why, and the ethos of what we’re about,” Elmi said.

“He’s getting married, and he wants to make a name for himself, and this is how we’re going to do it.”

The ascendance of chefs like Konrad and Beninato reflects Elmi’s management style as much as his approach to cuisine.

In 13 years with Perrier, the greatest lesson he took from the French master was to establish his own standard—which, to Elmi, is nothing short of perfection.

In an industry where talent migrates annually, people come to his kitchens to learn how to find it.

“There’s a black-and-white world to what we do,” he said; “it’s either perfect or we can’t use it. It’s up to me to be sure that I hold those expectations for myself and my team, and teach my team how to build up to that expectation.”

How do you do that?

“You tell yourself, ‘From now on, we’re going to be the best version of ourselves,’” Elmi said. “We don’t have the option to not be good for a day.”

That’s only possible if everybody buys into the vision, which is why Elmi hires for personality and drive over talent. He’d rather take on a hard-working novice who’s “inherently nice” and willing to learn than an ego-driven savant. Collaboration and free thought are encouraged, but they exist under “the illusion of democracy.

“There’s one person who this falls on the head of, and that’s me,” he said. 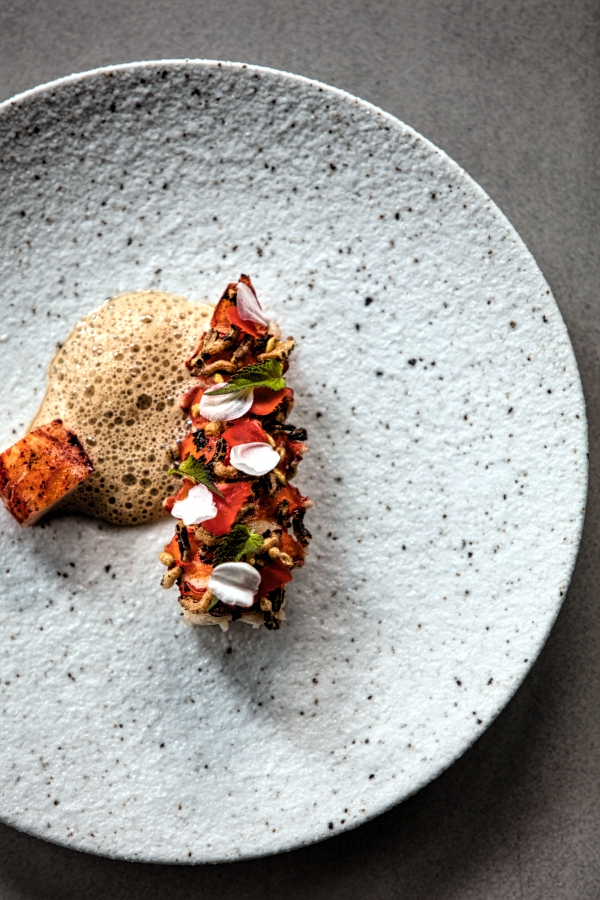 Elmi’s marriage of flavors on the plate as presented in the Laurel cookbook. Credit: Neal Santos.

The acclaim he’s enjoyed has been predicated upon decades of work, and Elmi hasn’t lost sight of that, even as he considers the restaurants and his career in them through a longer lens.

The late Anthony Bourdain famously compared old chefs with young pigeons—“you don’t see them”—and Elmi’s family life matters as much to him as his legacy does.

That’s why, as he weighs his considerable options for 2020, the chef who’s rooted his culinary coaching tree in the pursuit of perfection is also considering the sustainability of doing so.

“There’s three versions of my life,” Elmi said. “It’s cooking, hanging out with my family, and training.

“I like being around my family, and I’m at a point where I don’t want to work 90 hours a week anymore,” he said. “How do I set myself up for the long run?”

Laurel: Modern American Flavors in Philadelphia is available through the restaurant website and at booksellers everywhere.