Trending
You are at:Home»People»Making Plans for Michael

The Carpet Viking Statue outside of Ott’s Flooring in Deerfield, NJ.

And of course, the man with the pink pants and suspenders who watches over Royal Tire and Auto of Magnolia.

To that list of larger-than-life roadside attractions, Joseph Bonaparte of Collingswood would like to add a statue of his hometown’s most famous son, Michael Landon. 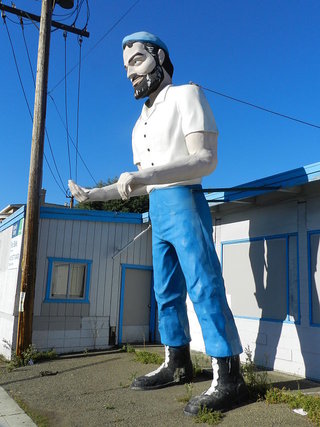 Bonaparte said he’s had the idea that Collingswood should erect a fiberglass “muffler man” in Landon’s image since 2012, when the relocation of a plaque honoring Landon became a minor local incident.

But because these giant, fiberglass roadside attractions haven’t been made since the 1970’s, Bonaparte is crowd-sourcing $7,000 to construct an 18-to-20-foot, inflatable Landon likeness that he believes could become a new Collingswood ambassador.

“[Landon is]  such a recognizable figure” whose characters “represent a lot of the more down-home, hardworking, honest, patriotic kind of American populace of the town,” Bonaparte said.

Jill Stolz, Sales Manager of Inflatable Design Group of El Cajon, CA, which Bonaparte approached for the project, said she could see the artistic appeal of an inflatable Pa Ingalls (perhaps Landon’s most famous role, from Little House on the Prairie).

“As a kid, that’s what I remember,” Stolz said. 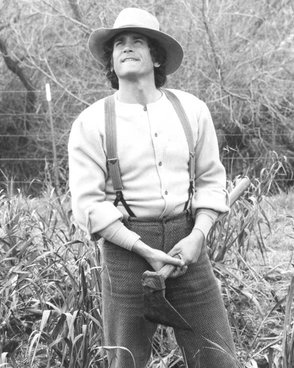 The project isn’t even that out of the ordinary for Inflatable Design Group, which has constructed custom characters for pro sports teams, colleges and universities, military recruitment agencies; even individuals “who wanted something in their own likeness.

“Each inflatable that we build kind of has its own application,” Stolz said “Everything we do is built from the ground up.”

Former Collingswood resident Abbe Effron, who worked with Landon’s widow, Cindy, to raise funds for his memorial plaque, took a dim view of the project.

“Personally, I think it’s great,” Effron said. “I just still think that knowing Collingswood, and little towns, it would have to be approved where he would take it,” Effron said.

Effron said that when she worked to get the Landon plaque installed, she had gotten approval from Cindy Landon to use her late husband’s image. She didn’t know whether Bonaparte would need it in this instance.

Even aside from the plaque incident, Collingswood has had a complicated relationship with Landon. He reportedly endured anti-Semitic bullying during his childhood there, which was marked by a turbulent home life.

But Bonaparte believes that “whatever his thoughts were about the town, I think [Landon]  would probably like it better now.” He thinks that the project could take off because the late actor is still regarded fondly.

Joseph Bonaparte of Collingswood with his daughter, Willa. Bonaparte is crowdsourcing funds to construct an inflatable Michael Landon character as a local ambassador to Collingswood. Credit: Matt Skoufalos.

Bonaparte stressed that his efforts are not endorsed by the local government, but that if the municipality were to request access to an inflatable Landon for local events, like Second Saturday and Collingswood May Fair, “it’s going to be available.”

“It’s certainly the kind of offbeat thing that people would build into an event in Collingswood,” said Collingswood Director of Community Development Cassandra Duffey.

“From a municipal standpoint we’d have to look into the logistics of it.”

To read more about the idea, visit his indiegogo site.