Trending
You are at:Home»Business»McFarlan’s Market a Go in Collingswood

The often-dark National Food Market building at 741 Haddon Avenue will have a new tenant.

The announcement that Janet Stevens was hoping to make only two weeks ago finally came—and she was on vacation when it did.

The owner of the Merchantville-based McFarlan’s Market will expand her neighborhood grocery business to a second location in Collingswood, finally bringing closure to a search begun more than three years ago.

With Stevens and her partner Peter Burgess traveling, the honor of breaking the news fell to Collingswood Mayor James Maley at the Monday meeting of the Collingswood borough commissioners.

Maley called McFarlan’s “one of the key components of the downtown that we need to make us a completely walkable community.

“For this Philly kid, it is a corner store,” the mayor said.

The McFarlan’s deal not only helps Collingswood recruit its second grocer within a one-block radius—the Welcome Market will open its doors in the fall in the old Woolworth building—but turns on the lights at the often-dark National Food Market.

The property at 741 Haddon Avenue will be purchased by the borough for $415,000 from its current owner, Shinder Pal, and sold to Burgess and Stevens for $400,000 in a deal that falls just short of an eminent domain acquisition, as Maley described it.

“The reason it worked that way is because we had kind of agreed [with Pal]in principle,” the mayor said. “We’re going to own the property for a moment, it’s going to pass to us and to McFarlan’s so that we avoid realty transfer tax.”

Maley said the borough would recoup the $15,000 difference in the first three years of a five-year PILOT agreement with McFarlan’s, the standard commercial property abatement offered to every new business in Collingswood.

The deal will involve the borough re-budgeting its capital funds to get cash in hand for the purchase of the property “and we’ll be paid at a simultaneous closing as well,” Maley said.

“Total investment in the property is going to be just north of a million dollars to make this work on the part of the investment by McFarlan’s,” Maley said.

“We’re giving them this help to seal the deal, get them here, and get it open.” 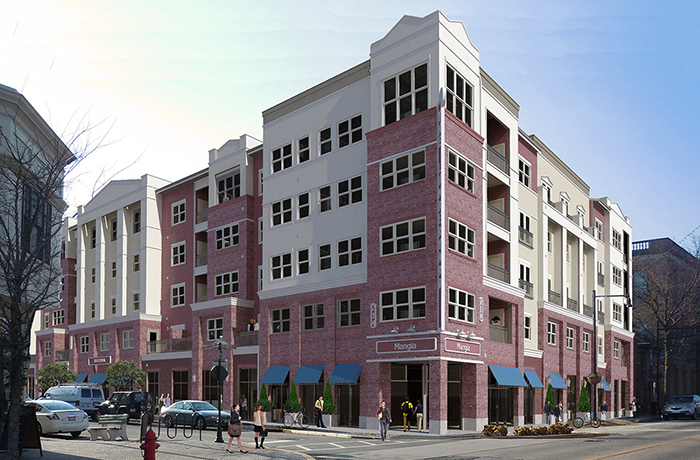 Concept drawing of the Collings at the LumberYard apartments, which is to be completed by the fall. Credit: The Ingerman Group.

Collingswood Commissioner Joan Leonard said that McFarlan’s and Welcome Market are “different and compatible” business models that should be able to coexist on Haddon Avenue, but she too was grateful to have a new tenant at the National building.

“First time in 100 years there’s been a change there,” Leonard said.

Maley believes both businesses can succeed downtown because the soon-to-be-completed Collings at the LumberYard apartments will bring “a critical mass of people out here who will be shopping there.”

During the meeting, Maley said that seven tenants had already signed leases on the building, slated to open this fall, including one who staked his claim on the fifth-floor corner apartment.

“We’ve got a great infusion of new residents that will be not just living on the avenue, but their lives will be oriented to the avenue,” he said.