Despite the half-decade it can take for wine grapes to mature, local growers are forging ahead in an industry that they say demonstrates potential to be among the best in the country. 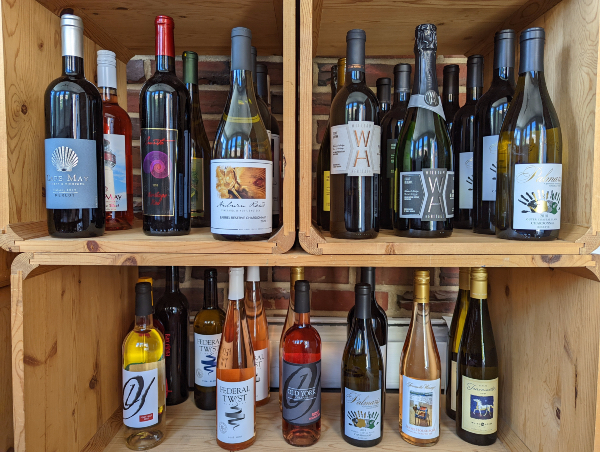 Historically, the agricultural bounty of the Garden State was principally defined in terms of popular roadside market stand-bys like tomatoes, corn, blueberries, cranberries, and peaches.

And if New Jersey wine continues the steady emergence it has demonstrated in the past decade-plus, that roster of famous crops could soon expand to include grapes.

Although the industry itself is still relatively immature, its products have found both a local audience and international recognition since the famous moment of the Judgment of Princeton in 2012.

With an area of interest roughly comparable to the Finger Lakes wine region of New York state, growers launched the Vintage Atlantic Wine Region in an agritourism bid back in 2014. Customer interest peaked amid the limited options for socializing during the novel coronavirus (COVID-19) pandemic, cementing visitors’ understanding of “the cultural sophistication of these activities,” Fischer said.

“[Wine]  is much more mainstream now,” Fischer said. “The market’s growing and thriving. There’s a great appreciation for wine here; there’s still plenty of demand to be met.”

More than 20 start-ups are presently working towards winery status in the state; Fischer estimates that New Jersey will eventually be home to somewhere around 70 wineries when the total shakes out. But even as they grow their brands, the local farmers who cultivate the grapes necessary for wine production are still working to buy time for their products to reach maturation.

At a minimum of three acres apiece to grow the grapes they need for production, more open space will be needed to supply them all, as will a longer logistical on-ramp to weather the five to seven years it takes the fruit to reach maturity.

“We need to figure out a way for people to underwrite the farmers for those years,” Fischer said. “How do you weather that time period?” 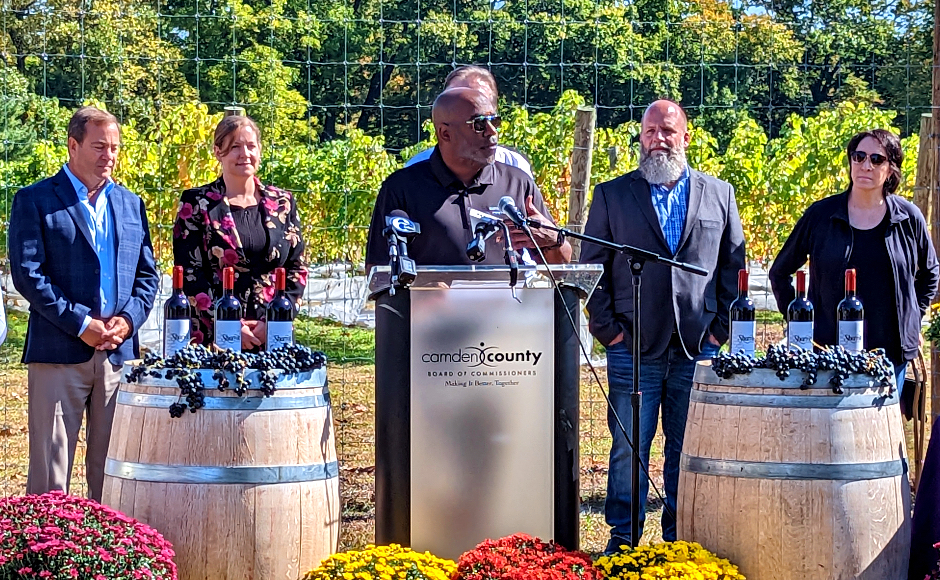 Camden County Freeholders speak at a harvest from the county vineyard in Blackwood in October 2022. Credit: Matt Skoufalos.

‘A lightning rod for the industry’

Camden County Commissioner-Director Lou Cappelli said that legislators and government officials are working to support the burgeoning wine industry “every way we can.”

To push the industry along, lawmakers could develop financial incentives that parallel those enacted to support the growth of wineries in other states. Cappelli pointed to growth of the $1.7-billion wine industry in Virginia as having been supported by that state’s Wine Promotion Fund.

In New Jersey, 88 cents of every dollar goes back to the agricultural board in the form of an excise tax, and is awarded to wine growers to support their operations. The stipulation for spending those funds is that they must benefit every wine grower in the state.

Those dollars could be bolstered by additional funds allocated to New Jersey regional Destination Marketing Organizations (DMOs), which support tourism efforts in local economies throughout the state. Doing so could close the loop that links the wine industry and the regional businesses that benefit from its customers: “the restaurants, the beds-and-breakfasts, the cottage industries around it,” Cappelli said.

“It doesn’t matter where this happens in the world,” he said. “Once the wineries begin to cluster, we’re becoming a lightning rod for the industry.”

As winemakers try to ramp up grape production to keep pace with consumer demand for wine, the Camden County government has thrown its support behind the fledgling industry by dedicating a few acres at its Lakeland facility to the cultivation of wine grapes. In October 2022, that lot yielded a 7,000-pound harvest, maximizing its output after six years.

Almathea Wine Cellars in Atco, which produces about 5,000 cases annually, committed to purchasing the bulk of that county crop at market price. Its president, Lou Caracciolo, estimates that those grapes could translate into roughly 225 to 250 cases of wine. 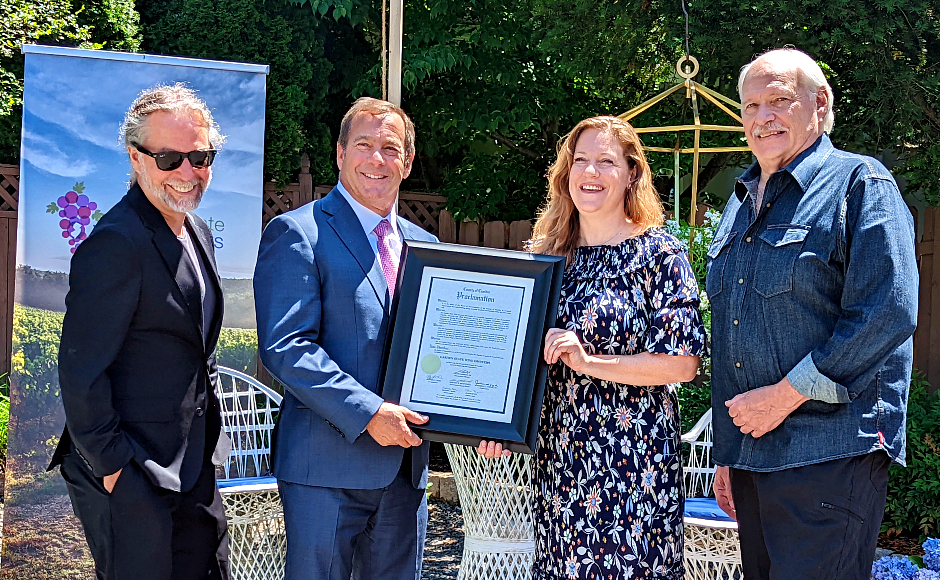 Beyond their suitability for wine-making, those grapes reflect a fruitful collaboration among “academia, entrepreneurism, and government,” from which the industry on the whole can draw useful parallels for its future growth.

“Wine sells by the story,” Caracciolo said — in this case, a tale of what happens when various local constituencies come together to invest collaboratively in a cash crop and the businesses supported by it.

The next chapter in that story involves the chambourcin grape itself, and how winemakers can best express its character for customers in New Jersey and beyond.

Caracciolo described Chambourcin as a “very hearty” French-American hybrid, comparable to pinot noir, and best handled like a noble grape. He’ll age them in French oak barrels for a minimum of two years to develop their flavors.

“The wine is grown in the field; then it’s made in the cellar,” Caracciolo said. “When they come into focus, and you pick it and get it clean and beautiful, 80 percent of the job is done. I don’t have to do much to make art out of this [grape]. They’re really doing a fabulous job taking care of it.”

His chief ally in the process is “benign neglect.”

“The will to power? You’ve got to park that when you’re making wine,” Caracciolo said. “I follow the form of the grape that’s in front of me and see what it needs, what I should do, how to treat it.” 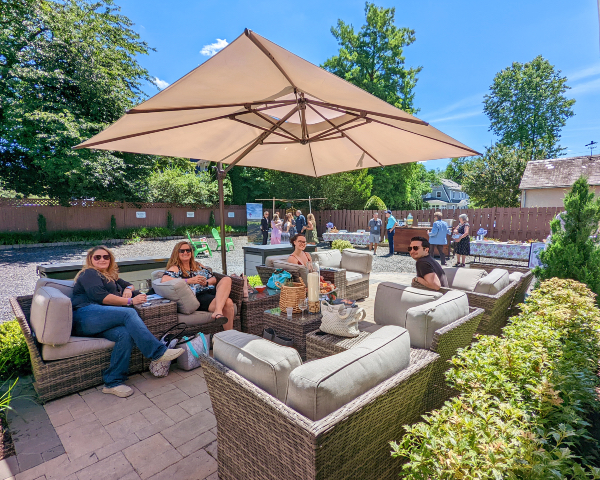 ‘The epicenter of wine’

The viticultural industry on the whole, however, needs more direct support to flourish than the grapes which comprise its products.

Helping the industry to realize its potential is the work of the Garden State Wine Growers Association, a nearly 40-year-old trade advocacy group that recently established its headquarters in Haddonfield.

Its downtown Haddonfield location helps to close that loop by offering a base of operations to host tastings, industry guests, and a cellar inventory.

“To actually have a location is huge for us,” said Auburn Road Vineyard and Winery owner Scott Donnini.

“Haddonfield is a great address to have,” and “the energy, the enthusiasm” that Segel has shown towards the industry, “is awesome,” he said.

The Association already benefits from the pro-growth mindset of legislators, but as its members continue to expand their operations, they “need support at every level,” Donnini said.

Projects like the county vineyard at Lakeland represent a significant boost to the program, as do efforts to preserve open space that can be converted into use as cultivated farmland, like the establishment of Saddlehill, a winery emerging from the historic, 70-acre Stafford Farm in Voorhees.

“Not only is Camden County looking to be supportive of small-parcel agriculture, but it’s a beautiful thing to be getting into the green space,” Donnini said.

Moreover, Donnini argued that any investment in Jersey wineries is one that will pay dividends as the industry matures. Nationally, New Jersey ranks seventh among all states in domestic wines produced; investing further into the industry as wine consumption increases can help solidify its position.

“You go up north, they’re growing pinot noirs; we’re doing merlot,” Donnini said. “The epicenter of wine is going to be New Jersey; it has to.

“We’ve got everything you need except for a late start,” he said.