The project was overseen by Haddon Township tile artist Stacey Douglas. It will be installed by the end of May and unveiled in early June along with other improvements to the pool facility. 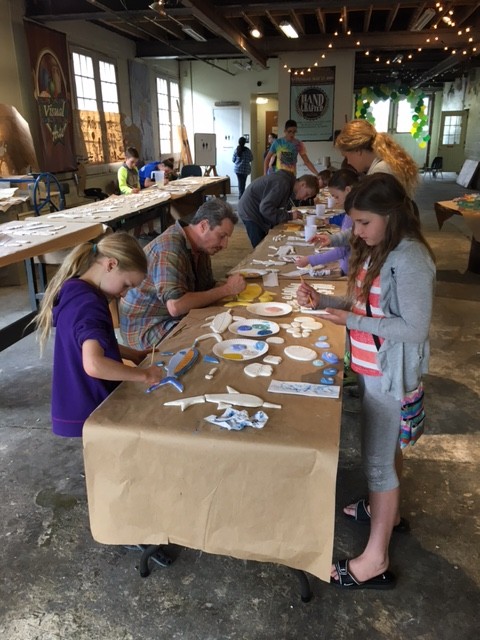 Two years ago, the borough of Collingswood bonded $1.7 million for improvements to Roberts Pool, its public-use aquatic center.

Among the fixes covered in that plan is a new snack stand and much-needed replacements for the 80-year-old bathrooms on the grounds.

With the building set to open at the start of the 2017 pool season, organizers are coordinating finishing details for the structure, which will include a mural produced by Collingswood kids with the help of Perkins Center for the Arts and Haddon Township tile artist Stacey Douglas.

Perkins Center Executive Director Karen Chigounis said Douglas was her first choice to oversee the project as much for her ability to work with the children as with the materials.

“Stacey does a good job de-mystifying the art-making,” Chigounis said. “[The kids] left with a tremendous sense of accomplishment each time, and a sense of ownership of this thing. I had so much fun each time we did it.”

Douglas said her job on the project was “to hold all the edges in.

“I facilitate, and I don’t have to squeeze it too tight because it stifles the creativity,” she said. “This kind of media is so forgiving. You can pop a tile off if it didn’t work. You can wipe the glaze off. You can make a new drawing.”

That hands-off approach to the project allowed the children to be responsible for the artwork with a minimum of adult oversight, Chigounis said. Kids from every school in the borough, across every age group (including a couple of their parents) participated in the project. 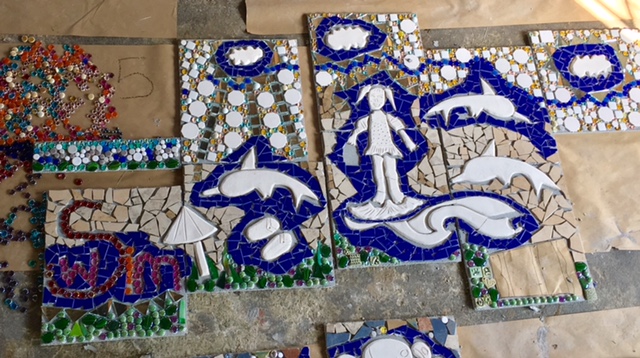 “One of the joys was that we found that the older kids really helped with the younger kids, so you could see the team mindset at work,” Chigounis said.

The visioning process for the tile work took place over a pair of “whirlwind,” two-hour sessions in which children were encouraged to free-associate across a number of topics, Douglas said.

“That’s how we ended up with snakes and flip-flops and umbrellas and chairs; things you would find in the environment,” she said. “They drew what they felt moved to draw. I accepted everything, and then we made it all work.”

Once the tiles were created and glazed, they were shipped to the Perkins Center Moorestown studio, where studio and pottery technician Paul Serena helped Douglas fire them in the kiln. The mural is expected to be installed May 26, with a tentative unveiling ceremony slated for June 17. Roberts Pool will have a grand opening ceremony June 24.

The mural is one of 30 of which Perkins Center has overseen the installation in three counties in the past 15 years. Its $10,000 price tag reflects the labor-intensive design and installation process, plus the cost of outdoor sculpture tiles, glass, and mirror elements. Douglas’ experience was integral to the design, execution, and legacy of the project, Chigounis said. 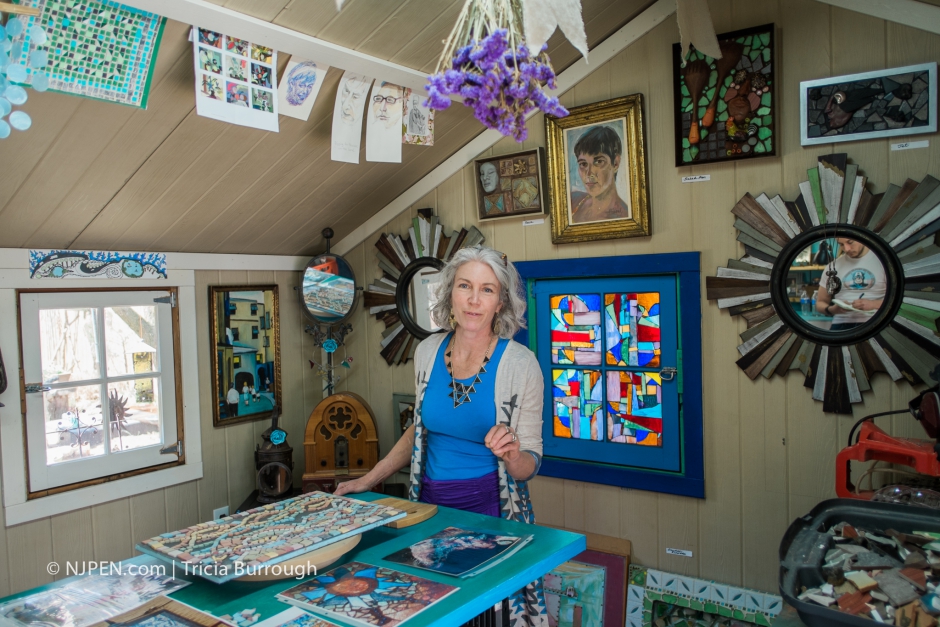 “Stacey’s not just an artist; she’s an artist-artisan,” Chigounis said.

“She really comes in understanding not just the art but the mechanics and the technical information that makes these [murals] last.”

Collingswood Mayor Jim Maley said the project is an attempt to infuse some fun into what was essentially a public works project to shore up the foundations of the pool, seal off leaks, and resolve underground drainage issues.

“I think it’s going to do exactly what we wanted: brighten the whole area up,” Maley said. “It’ll be a nice addition to give the pool a facelift.”

The mural will adorn the outside of the pool snack stand—which, more importantly, will contain new, expanded, and easier-to-clean restrooms, the mayor said.

“We’ll see how it develops, but I’m sure I’m going to get a hundred ideas,” Maley said. “A lot of what we’re doing already has been adapted from what people are asking us to do.”