Trending
You are at:Home»People»Want to Stop Fake News? Check Your Own Assumptions First

Penn reference librarian Samantha Kirk offers tips to help readers weed out the junk from the volume of information they encounter. She says the first barrier to overcome is the brain itself. 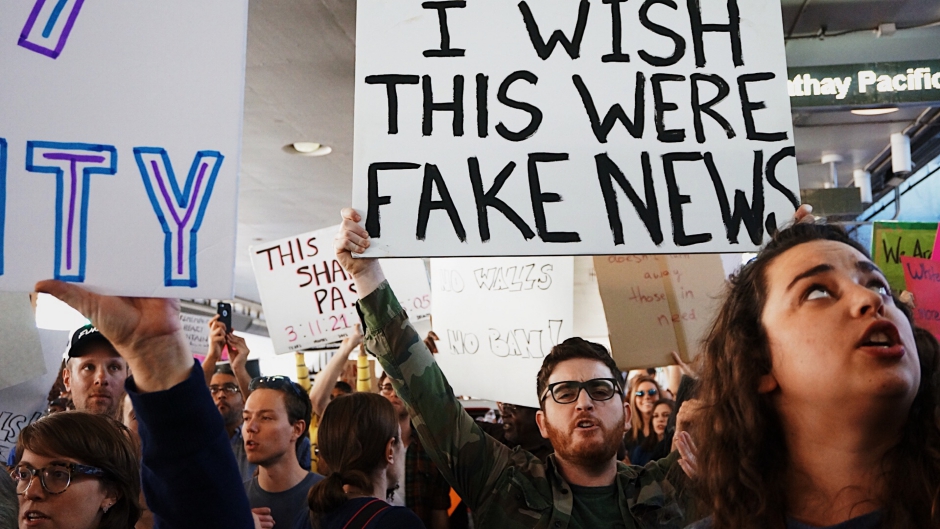 “Fake news”—propaganda, libel, and the outright manufacturing of information—has existed since the invention of the printing press.

Today, the problem has only intensified, as digital technology makes it easier to spread all manner of information, and publishers vie endlessly for the increasingly divided attentions of readers.

Consequently, it has become more difficult for readers to know if the stories they encounter are true, false, or a mixture of both. And when emotional attachment to the material deepens, it gets even more complicated.

To help readers develop some useful strategies for sifting through the details, University of Pennsylvania reference librarian Samantha Kirk has developed a talk that she’s delivered as part of the Camden County Library Workshop Series.

Entitled: “False Alarm! Identifying Fake News from Either Side of the Aisle,” Kirk’s presentation came to the Haddon Township Library Tuesday. She’ll repeat it August 15 at the Camden County South County Regional Branch in Atco.

“I’ve heard the term ‘fake news’ used more and more frequently, both among my friends and family, and also in the media,” Kirk said. “I wanted the chance to get the community together to talk about it; to come to a common understanding of what this term means, and how to identify it.” 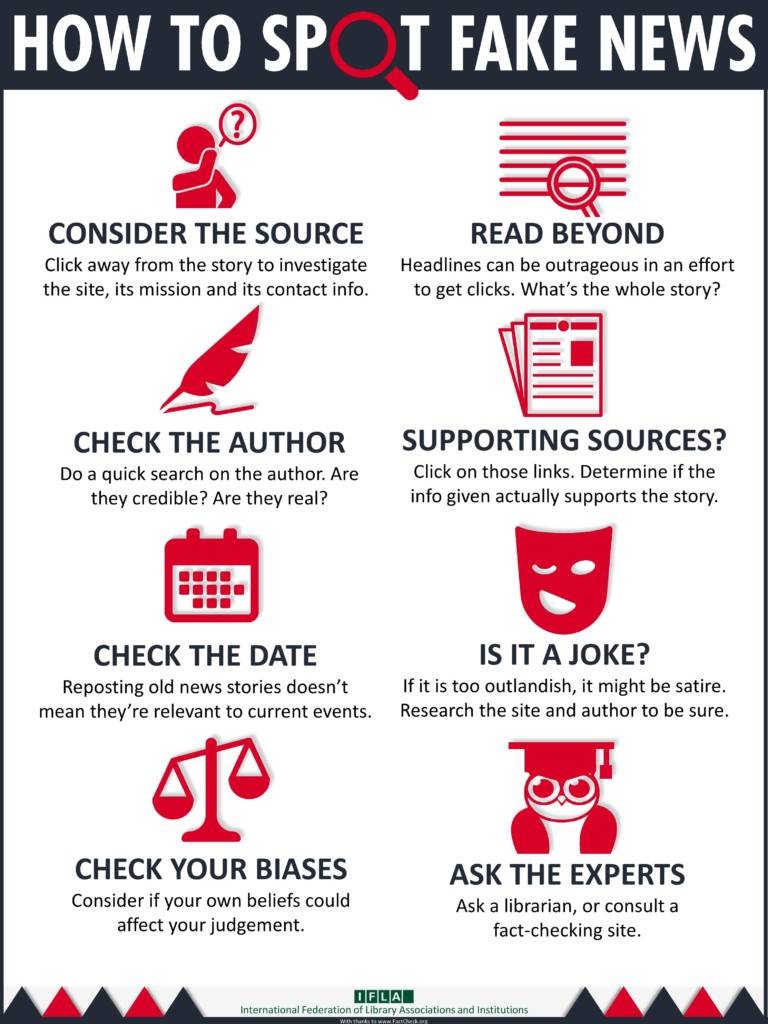 How to Spot Fake News. Credit: International Federation of Library Associations and Institutions.

As eager as her audiences have been to dissect the underpinnings of fake news, Kirk pointed out that the work starts with people reflecting on their own biases and media consumption habits.

The mind wrestles with new information in the course of forming ideas.

Psychological phenomena like confirmation bias—wanting something to be true so bad that you ignore evidence to the contrary—and the backfire effect—rejecting valid information because it undermines deeply held beliefs—can further complicate the search for truth.

To illustrate the principle, Kirk offered a pair of myth-busting examples, one about the value of marinating meat for added flavor, and another about George Washington’s wooden teeth.

It turns out that marinades don’t really penetrate deeply into thick cuts of meat, and Washington had dentures that were a combination of animal teeth and (possibly) the teeth of slaves.

Some readers would be inclined to accept the new information as presented in the articles Kirk highlighted. But those with entrenched ideas about the value of marinades or the historical accuracy of our founding father’s bridgework would be more skeptical.

The depth of readers’ emotional connection to the material is directly related to their ability to accept information that contradicts what they already believe. To Kirk, that means readers must be responsible for their own reactions first.

“Do a gut check,” she said. “See where your pre-dispositions lie.

1. When confronted with new information, begin with self-reflection.
2. Do some parallel checking on the story and on the source.
3. Link claims in the story to evidence backing them up.
4. Review that evidence as needed.

Self-reflection is the first of Kirk’s four strategies for sniffing out fake news. The others include “parallel checking,” which means looking into the source presenting the information, and researching whether other people have written on the same topic or have drawn the same conclusions.

Finally, she said, readers should be prepared to review the conclusions they reach if new information challenges them.

“We’ll never compile a comprehensive list of fake news sources; new ones pop up every day,” she said. “Conversely, not all established news sources necessarily have more accurate or better reporting than new and emerging journalistic outlets. Instead, we need to focus on the content of the piece itself.”

Part of the issue for readers is the bombardment of aggregated stories: primary reporting that is summarized in brief by a secondary outlet, and is often slapped with a clickbait headline to entice the audience.

Kirk asked readers to watch out for details that have been cherry-picked or teased from other sources, to consider whether the claims made in the story match the content of the original source material, and ask whether the data involved is presented deceptively.

“It’s understandable when a reporter writes about findings from a medical or scientific journal that they’ll want to re-frame content,” Kirk said.

“But it isn’t acceptable to cherry-pick or obscure to the point of distorting the original findings. I think that’s where news consumers have to be vigilant and go back to the original source.”

The last half of Kirk’s presentation teaches readers how to better evaluate evidence. She coached them on identifying misleading graphs and statistics, and how to make a critical assessment of media-presented data. Then she put them to a final test with an article on claims about organic foods. Participants paired off, and each spent fifteen minutes parallel-checking a different part of the story and the sources it cited.

“People have the hardest time when they’re relying on new sources from a single ideological perspective,” Kirk said. “I think it can be very tempting to continue looking at new sources form your own favorite newspaper or news site, and it’s harder to get people to look outside [one]particular ideological bent.”

Kirk ended her talk with a reminder that the existence of contradictory evidence means it can be okay to change your mind, even if it means un-learning some deep assumptions.

“Be willing to look at new evidence continually, even if it goes against your current beliefs,” Kirk said.

Because it’s impossible for readers to fact-check every piece of information they encounter, she said it’s even more important that they take responsibility for at least fact-checking stories before they fee compelled to share them on social media.

“That way, you’re less likely to accidentally share false information,” Kirk said. “Look at the evidence for any piece of news where you feel a strong, impulsive reaction, either in anger or affirmation. It’s a good practice to help keep an open mind.”