Trending
You are at:Home»People»When Life Gives You Valentines, You Make Spaghetti Sandwiches

Fed up with Hallmark holidays, Chef Dane DeMarco created a new one to feed hungry hearts: National Spaghetti Sandwich Day. It just happens to fall on February 14 every year. 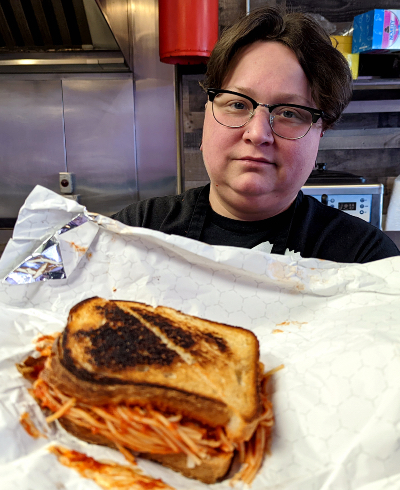 Despite its establishment as a commemoration of romantic love, Valentine’s Day might be the most divisive of all secular holidays.

For the preternaturally single, it’s a grim omen of loneliness; for the serially attached, it’s a minefield of expectations.

But like a lot of Hallmark holidays, Valentine’s Day also presents an opportunity to subvert those expectations.

Chef Dane DeMarco landed on a corker of a solution a few years ago while working at the American Sardine Bar in Philadelphia’s Point Breeze neighborhood.

“You’re not going to take your loved one there on Valentine’s Day,” DeMarco said.

“I started seeing all these national and international food days pop up on Instagram,” they said.

From there, the unlikeliest of forbidden loves was born.

Then, they grill a blend of fontina, provolone, and mozzarella cheeses, add spaghettini with homemade-marinara, and toss in fresh, hand-torn basil. The chef describes it as “vegetarian by nature, vegan by choice,” with non-dairy alternative cheese options available.

For the past five or six years, National Spaghetti Sandwich Day proved itself a pop-up winner, whether DeMarco ran it at Sardine Bar, Sonny’s Cocktail Joint, or BurgerTime, their newly opened hamburger joint in Audubon.

“It’s got a following,” DeMarco said. “It’s winter, it’s cold. Spaghetti sandwich is on the menu.”

For a fast-casual eatery that also serves hot dogs with Spaghettios and hamburgers with peanut butter and Fritos, DeMarco said the spaghetti sandwich fits the BurgerTime theme of nostalgia. They’ve fed it with a good bit of artificial scarcity as well.

“I’m the type of chef that when people really enjoy something, I take it away,” DeMarco said. “People always asked about it, asked me to bring it back. I was like, ‘you can put spaghetti on a sandwich.’” 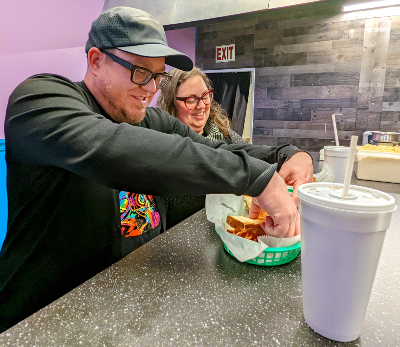 As if in testimony to the lore of the spaghetti sandwich, Missy Mazzaferro and Skylar Gahagan of Collingswood were waiting to nab the first ones off the grill Monday afternoon.

The couple had never made it to Sardine Bar to try a spaghetti sandwich; Mazzaferro said they’d planned their day around having one at BurgerTime.

After the first few bites, they agreed that it had been worth the wait.

“It all works well together,” Mazzaferro said.

“It’s lighter than I expected it to be,” Gahagan said. “Very fresh.”

DeMarco advises fans of the spaghetti sandwich to enjoy it today, until 7 p.m., while it’s out of hibernation.

“Then you don’t see it again until next year,” they said.