Trending
You are at:Home»Government»Camden County»A Prison Falls, a Playground Rises in North Camden

On Monday, officials cut the ribbon on Cooper’s Poynt Park, culminating a decades-long transformation of the Riverfront State Prison into a keystone of North Camden revitalization. 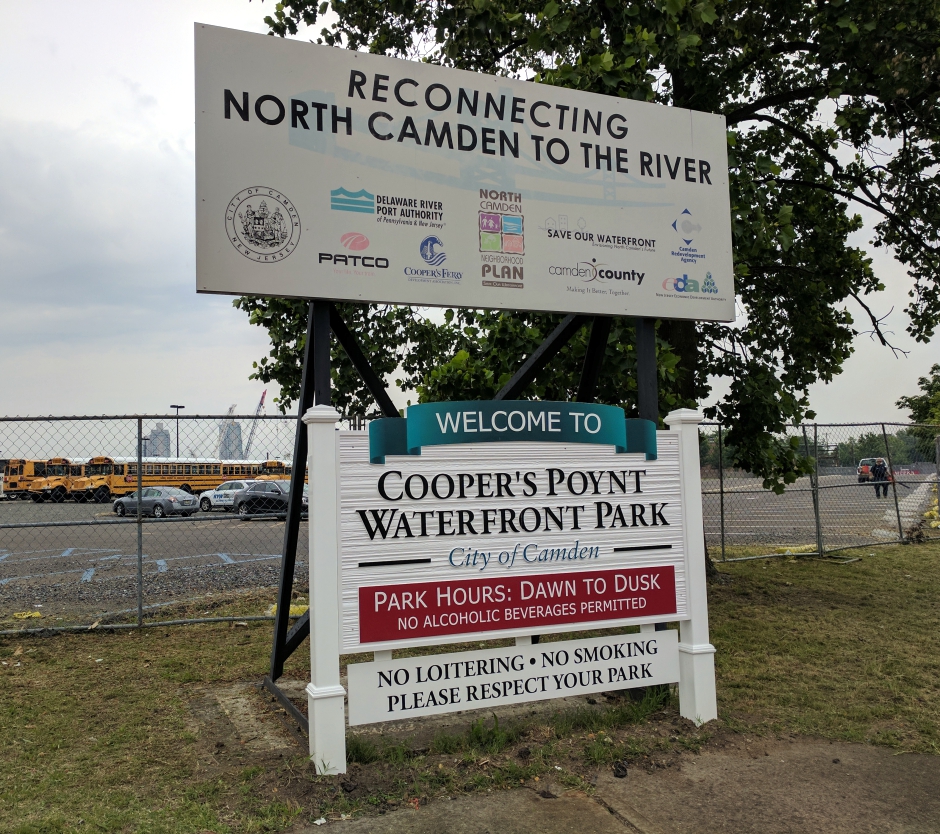 Signage at Cooper’s Poynt describes the intention of the park to connect the neighborhood with the waterfront. Credit: Matt Skoufalos.

To understand the historic differences in the uses of waterfront property between south Philadelphia and north Camden, Camden County Freeholder Jeffrey Nash shared a joke once told to him by the warden of the Riverfront State Prison.

In South Philly, the warden said, condo owners would pay hundreds of thousands of dollars for a view of the Delaware River that was only available in New Jersey to people who’d stolen comparable amounts of money.

Nash, liaison to the Camden County Parks System described that prison as “a terrible mistake” that “choked off” residents of North Camden from their rightful use of the waterway.

It took the final gubernatorial act of John Corzine to tear the facility down in 2010, and on Monday, it was replaced with a brand-new park called Cooper’s Poynt.

“We are going to remove a prison and replace it with a playground for the children,” Nash said. “That’s a powerful statement.”

Overhauling the site was a project that took decades and millions of dollars. The Delaware River Port Authority allocated $8 million for demolition of the prison, and the New Jersey Economic Development Authority (EDA) supplemented that with $5 million in planning and infrastructure grants. 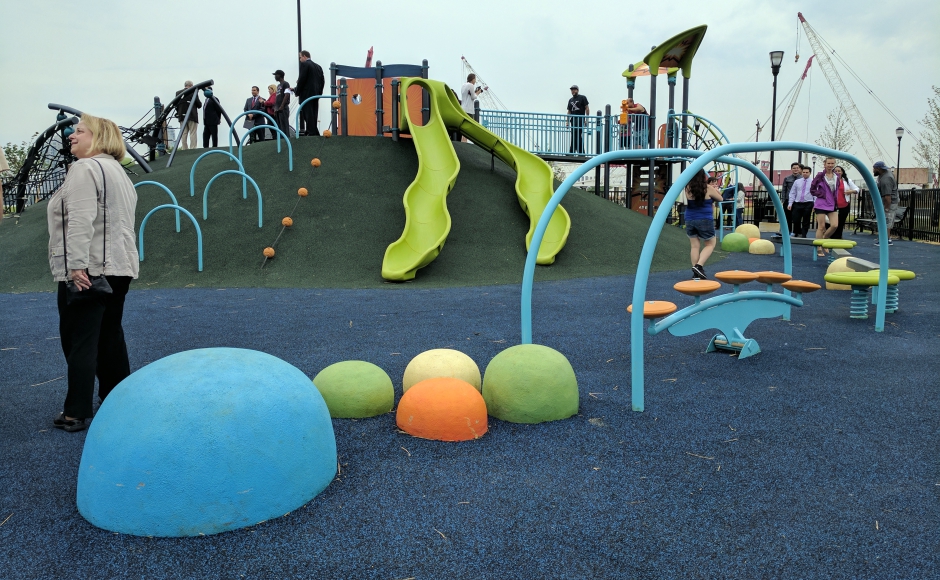 The Wells Fargo Regional Foundation kicked in $750,000 for a neighborhood planning grant, and the William Penn Foundation added another quarter-million dollars for the bikeway improvements.

Its central amenity, however, is a $300,000, one-of-a-kind playground overlooking the Delaware River at the foot of the Ben Franklin Bridge. On Monday, officials from every level of government climbed the synthetic play surface to its summit for a view of the surrounding area. 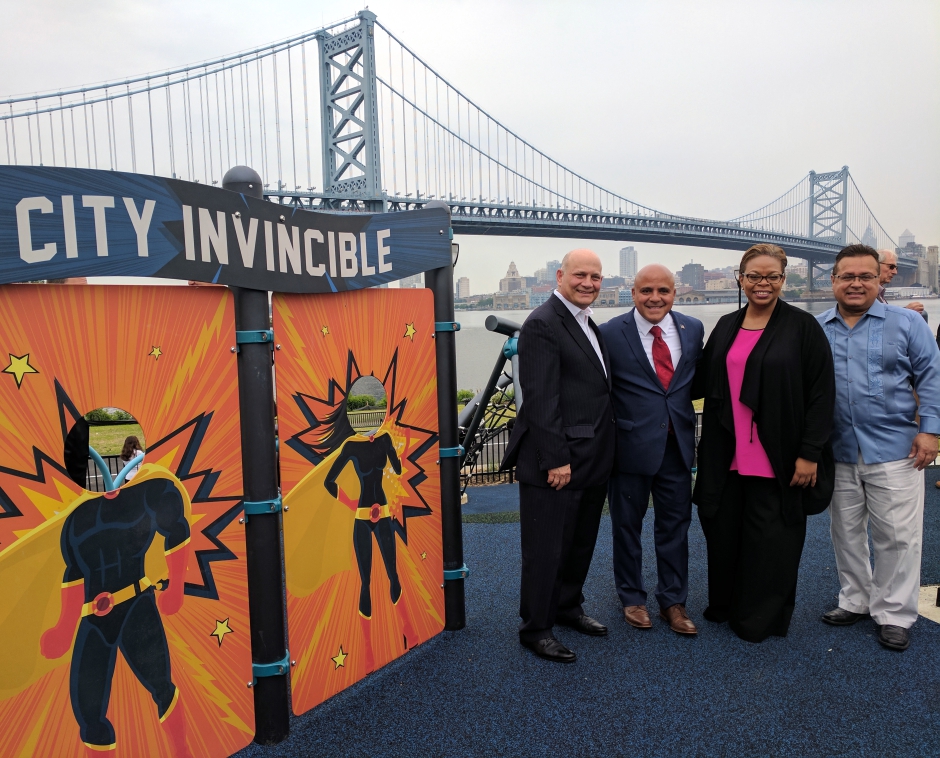 Camden City Mayor Dana Redd called the project “one of the finest examples of how people can work together for the benefit of their community,” and extolled it as a foundational piece of the future development of the North Camden waterfront.

U.S. Congressman Donald Norcross, who had helped secure funding for the project at various levels of government throughout its lifespan, echoed Redd’s remarks about it being a collective effort.

“This was not any one person’s dream,” Norcross said.

There are plans to construct a mixed-use commercial-residential development on the surrounding property at Cooper’s Poynt, but the EDA still hasn’t found qualified developers to take on the project.

Maureen Hassett, EDA senior vice president of governance, communications, and strategic initiatives, said the agency is evaluating options for the land, which is still owned by the New Jersey Department of Corrections.

“We remain committed to finding a buyer for this full property,” Hassett said. “We’re evaluating options. We think it’s only a matter of time before it’ll get here.” 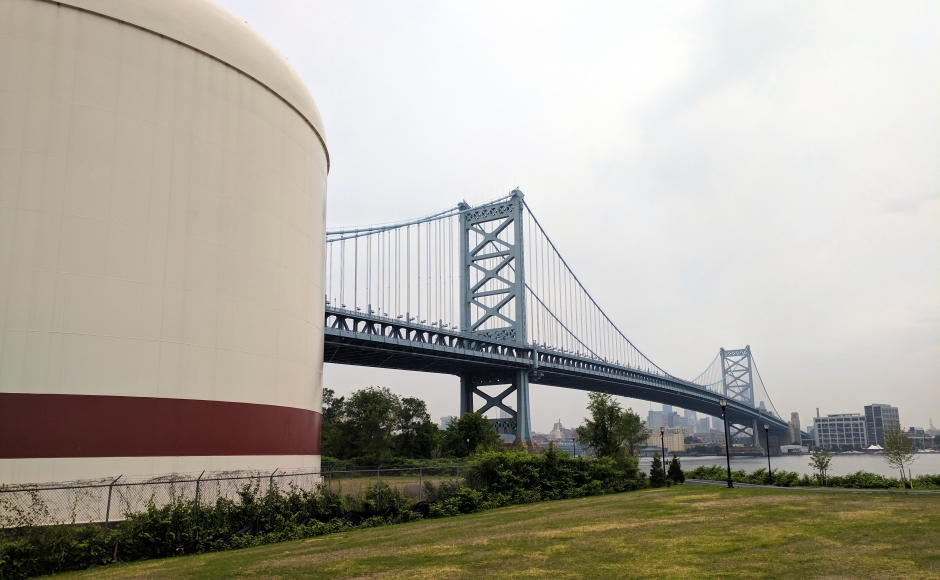 Hassett said she expects the redevelopment project to complement existing economic development initiatives in the city as “people follow jobs.”

But the infrastructure repairs are on the way, too, according to Cooper’s Ferry Partnership CEO Anthony Perno.

By January, neighborhood roads leading into Cooper’s Poynt will be repaved; PSE&G has already completed work on gas mains, and water and sewer lines are next. Throughout the summer, the city will provide social programming to help introduce residents to the park.

He called it “a roadblock” to the revitalization of the surrounding neighborhood, and described the park that replaced it as “the first phase of entitlements” that will help entice future developers. 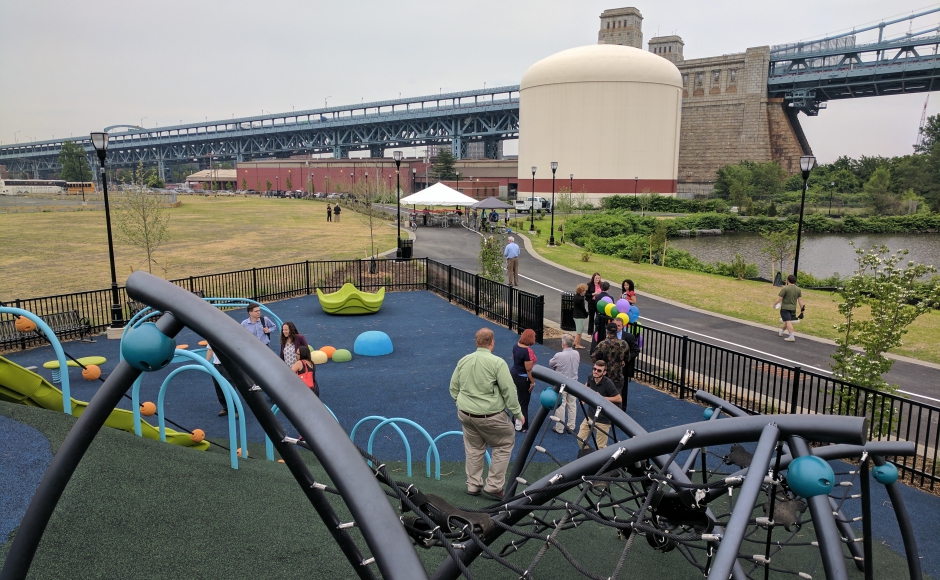 Rodney Sadler, Executive Director of the Save Our Waterfront neighborhood coalition, recollected the years of work that went into salvaging the property, from opposing construction of the prison to the day it was leveled.

“It made a difference,” Sadler said. “It made it possible.”

Building stakeholders was a lengthy process; Sadler also spoke about how longtime residents were suspicious that even with the prison gone, they’d be driven from the area by gentrification.

The work isn’t done yet to tie the park into the neighborhood, but Sadler knows it’s coming. He expects transitional developments will grow out from the surrounding blocks, culminating in a neighborhood that will finally reap the benefits of patience.

“There needs to be that other connection,” Sadler said. “It has to start somewhere.”