The local landmark was badly damaged in a two-alarm blaze. No injuries reported.

The Crystal Lake Diner, a Haddon Township mainstay and South Jersey landmark, was consumed by flames shortly after closing on Sunday night, as fire companies from four towns responded to a two-alarm call that drew onlookers by the dozens.

Responders from Westmont, Collingswood, Audubon, Bellmawr and beyond arrived on the scene around 11 p.m. Sunday evening, as flames shot out of the roof of the restaurant. 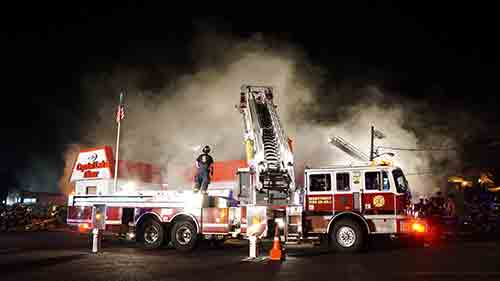 Pumper trucks parked around the rear of the building appeared to concentrate their water on rooftop vents, while other crews worked the front and sides of the restaurant for nearly three hours to bring the fire under control.

Westmont Fire Chief John Medes said the inside of the restaurant was badly damaged, and that the floor had collapsed from the heat, but that no injuries were reported.

Medes said he believed the restaurant had not been empty at the time of the fire, but that there were no customers within when it broke out.

Nattress, who had last worked an overnight shift at the diner on Saturday, had heard about the fire from her coworkers. She stood in the parking lot with them until the last of the smoke was extinguished, her eyes welling slightly. 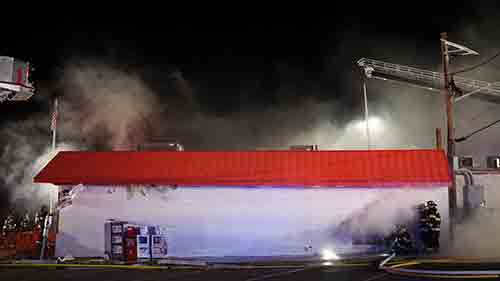 Memorialized in The Silver Linings Playbook, the family-owned restaurant has stood at the same Cuthbert Boulevard location for 24 years. For many of those, it had operated around the clock.

The Crystal Lake Diner was not the only Haddon Township business to have suffered a fire recently. Only two weeks ago, flames damaged the exterior deck at Tom Fischer’s Tavern, just a half-mile away.

The Newton Diner, less than a mile away in the opposite direction, burned down four years ago this September.

No cause of the fire has yet been determined.