Trending
You are at:Home»People»What is Pokémon GO-ing on in South Jersey?

The free mobile game is gaining astronomical numbers of users and incalculable amounts of data from them, but parents and kids using it to explore their communities in the summer heat seem unconcerned. 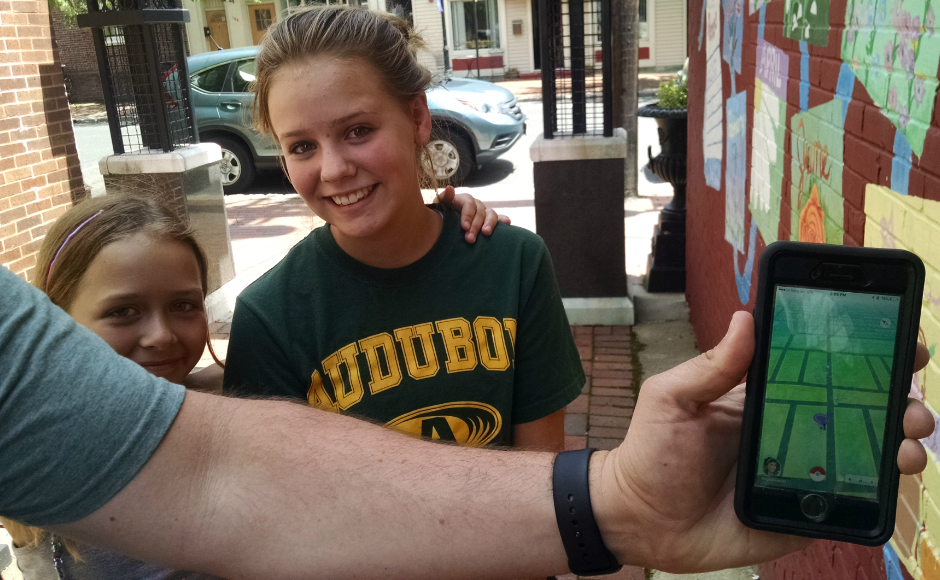 Mike Cockrell rounded the corner of Peddler’s Path, a restored alleyway in the Audubon central business district, head down, cell phone in hand.

“Look, there’s more over here,” he said to the two girls who followed right beside him, 14-year-old Emma Sullivan, her head also buried in her phone, and Emma’s 9-year-old sister, Piper, who craned her neck for a glance at the screen in the afternoon sunshine.

The trio were playing Pokémon GO, an augmented-reality video game based on the Japanese brand that, two decades earlier, had spawned a billion-dollar empire. Cockrell, a teacher who learned about the game from his students, likened the experience to geocaching, a virtual treasure-hunting activity that rose in parallel with the advent of GPS technology.

“It has that feel, except it’s everywhere,” Cockrell said, acknowledging that the comparison falls far short of describing the impact of a game that is on par to surpass the number of active daily on Twitter, according to market-watchers SimilarWeb. Geocaching remains a niche interest, whereas in the span of a few days, Pokémon GO has “more kids outside than I’ve seen in a month,” he said.

Heather Renshaw, the Sullivan girls’ mother, said the family had been “just sitting around, wondering what to do” on a summer afternoon, and was now headed to pump up their bicycle tires and “get outside doing something together.

“It’s incredibly silly but it’s fun, too,” she said.

Emma Sullivan said she “wasn’t planning on going anywhere today” until she’d seen on social media that all her friends were at Audubon Lake playing the game. Piper Sullivan asked, “When does it stop?”—not because of any Pokémon fatigue, but only because she doesn’t have her own device on which to play it. 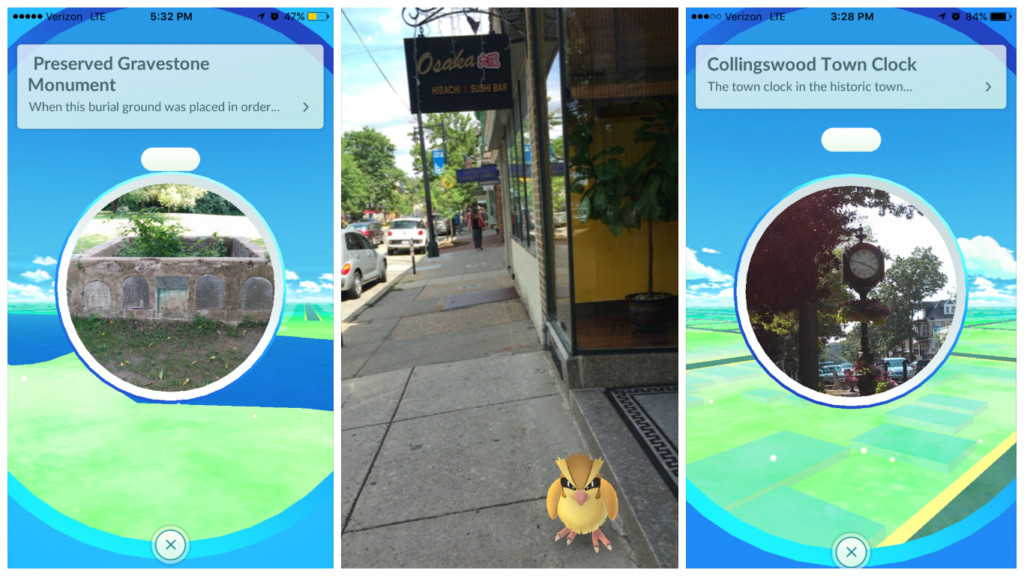 ‘What will outlive the game are the case studies’

Matt Klein, a research analyst at M&C Saatchi Mobile in New York, NY, said the explosive popularity of the game is nearly unprecedented as it’s risen to become the top app in both the iTunes and Google Play stores.

He cited third-party research that projects the game may have earned its creators as much as $4 or $5 million inside of the week since its release. Buzzfeed estimates its popularity alone has driven stock in Nintendo, creators of the Pokémon video game series, up tens of billions of dollars.

As a cultural phenomenon, Klein compared its virality to last summer’s ALS ice-bucket challenge videos, through which 2.5 million people donated some $115 million to the ALS Association (and countless others merely used the opportunity to soak a friend in cold water for the purposes of a YouTube video).

“A lot of people want to say that you have to put ad dollars behind a message or a product, and what we’ve just seen is that when you create something that’s sticky, it speaks for itself,” Klein said.

“We’re literally talking millions of dollars and topping the charts in mere days,” he said. “Whether it’s the technology or the mechanics of the game, you get this experience that’s pretty incredible.”

The popularity of the game may owe to a combination of variables—augmented reality, geolocation, a nostalgic entertainment property, and the social components of its competition—Klein said, but regardless of how long it lasts, “what will outlive the game itself are the case studies.

“Augmented reality is in the hands of millions,” he said. “It’s normalized this technology. I think we see more advertisers, marketers, or game developers start to analyze this technology.” 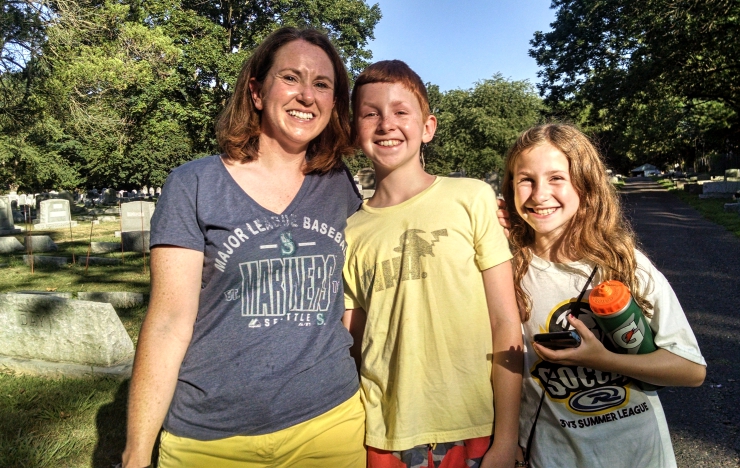 The game itself requires very little skill other than an understanding of its mechanics and a compulsion to keep playing, which makes it ideal for advertisers and marketers looking to capitalize on its popularity, said Alex Turgeon, an MBA student at Clark University in Worcester, MA.

Turgeon, a systems analyst, said businesses could leverage the game’s geolocation properties to drive consumer traffic to brick-and-mortar stores, creating value with “something that’s not even physical; not even real.

“This is absurd, but it works,” he said.

Like Snapchat, a messaging app that sells “geofilters,” or “location-based overlays” to promote events, sales, or businesses, Turgeon believes Pokemon GO could eventually provide something similar. Purchase a date and time and specific range, and the game could increase the occurrence of high-level creatures for businesses to lure in customers.

“I don’t want to call it innovation, but it’s just one of those odd things that goes viral, and when it hits, there’s a lot of opportunity for businesses,” Turgeon said. “If this parent company’s smart, they’ll find a model for other local businesses to be able to attract large [numbers of] customers.”

In the Haddonfield Baptist Cemetery on Kings Highway, Cherry Hill resident Nancy Rondeau and her children Owen and Sydney were searching out pokémon among the tombstones around 7 p.m. Nancy Rondeau said she’d been playing the game while on a run earlier in the day, and had noticed the borough downtown was littered with Poké Stops—interaction points within the game—“so we decided to come out here.

“I find it a bit addictive,” she said. “I do like going out and seeing places. I find the photos of landmarks are fascinating. We’ve definitely taken more walks in the last three days.”

“If there’s good coming out of this, it’s people having a shared purpose,” said Mike Johansson, a Senior Lecturer in Communication at the Rochester Institute of Technology in Rochester, NY. “Complete strangers are talking with one another and collaborating.”

On his campus, from 5 p.m. to midnight, “you couldn’t see a single person who was not doing this,” Johansson said. He likened it to the early days of FourSquare, a social gathering app that “did well in summer when people had a lot of time,” tapered off, and then rebounded as college started up, and kids explored their new communities. Still, Johansson said, “this particular level of interest is going to be difficult to sustain.”

“We really should be leveraging that,” he said. “When we find the Poké hotspots, we should put out a lawn sign that says, ‘You might be interested in X’; there’s so many ways that this could be leveraged.” 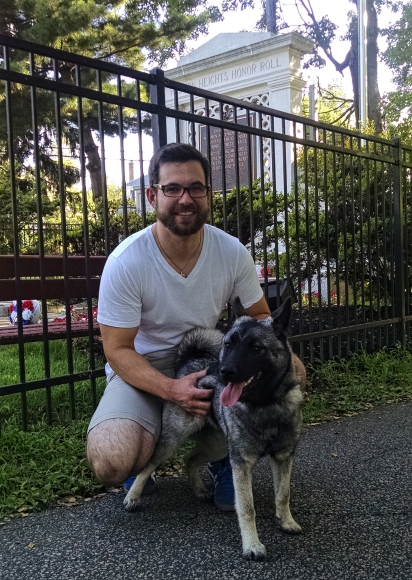 ‘Data collection is going to happen’

Nearby, Anthony Polidoro of Audubon and Jim Blanda of Haddon Heights were sitting on a footbridge in the park, playing the game.

Blanda, like many others, said the game had gotten him more active; he’d walked about three miles playing it the day before.

But whatever social value the game might hold is, in many ways, incomparable to the value of the data that it assuredly is collecting. Pokémon GO is based on Ingress, a data-gathering system that also provided the foundation for Google Earth, and which “finds keywords that people use in connection with places,” Johansson said.

“It’s data on top of data,” Johansson said. “The downside, of course, is that everywhere you go, everything you do is leaving a data trail. When I start going to a bunch of different places, a machine is drawing connections between places I don’t go so often, but maybe there’s some common interests. It starts to build a more complete picture of what I’m really interested in.”

None of the players seemed concerned with those prospects, however; that the value of their nostalgic reminiscences, the time spent on a family outing, or the excitement of discovering local landmarks might be bought with a boatload of voluntary submitted personal data.

“I know,” Polidoro said, offering only that he was “somewhat” bothered by it.

“I feel like so many things already do that,” Blanda said.

For its part, Niantic, the software company behind the game, has responded immediately to criticisms that users who associate a Google Play account with their game profiles are in danger of losing their privacy, telling Game Informer that the game “only accesses basic Google profile information…[and that]Google has verified that no other information has been received or accessed by Pokémon GO or Niantic. 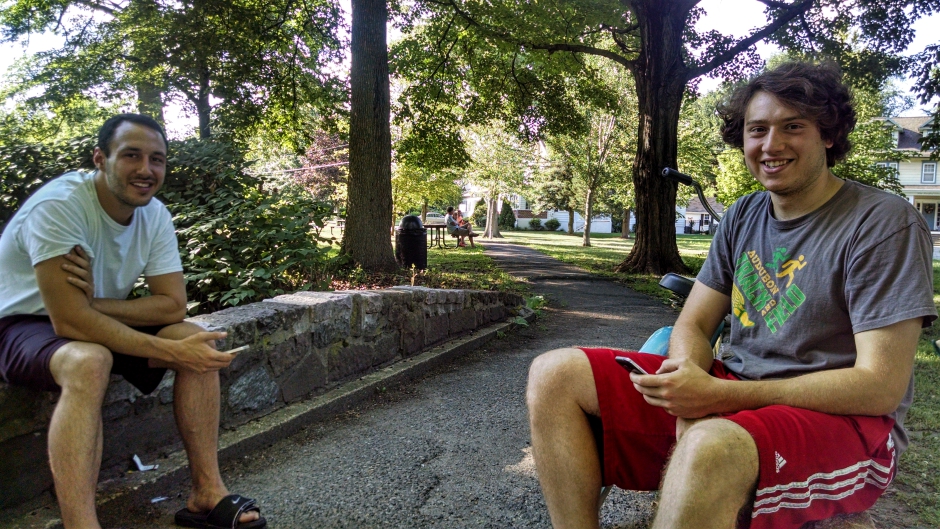 “Google will soon reduce Pokémon GO’s permission to only the basic profile data that Pokémon GO needs, and users do not need to take any actions themselves,” the statement said.

Still, market-watchers and players alike know that only the game developers know what kind of data they’re collecting.

Whether it’s valued in dollars or user metadata, “it’s not the first time that data collection has occurred, and it won’t be the last,” Klein said.

“Whatever app comes out, no matter what platform comes out in the future, data collection is going to happen,” he said. “That’s kind of the fuel of the Internet right now.”

For concerns beyond how your data’s being used, Intel Security Cybersecurity and Privacy Director Bruce Snell provided the following safety tips:

Be aware of your surroundings. People have a tendency to stare at their screens while walking around, which can lead to some very dangerous situations. Add in the fun of tracking down a new Pokémon and the distraction becomes even greater. Keep a constant eye on your surroundings. Don’t go places alone to catch a Pokémon that you wouldn’t normally go. The loading screen actually cautions you to stay aware.

Watch for counterfeit apps! As we saw from the McAfee Labs write up, there are already malicious versions of the apps in circulation. Avoid these by staying on well-known app stores.

Don’t cheat! A common tactic around popular games is to create cheat apps or websites that promise to give you extra in-game currency or unlock hidden characters. Often these sites or apps are riddled with malware and/or will collect your contact information for nefarious use. The time you save using one of these cheat apps may cost you!

Install security software. If you do end up downloading some form of infected version of the app, having anti-virus software on your mobile device can keep it from stealing your information or compromising your device.