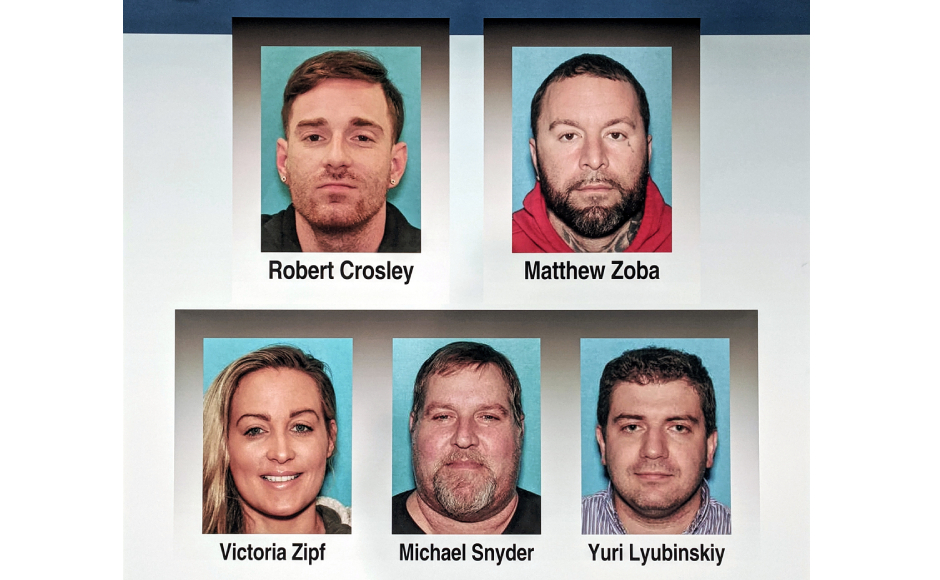 Five Philadelphians were charged in a gun- and drug-running ring that stretched into Camden. Credit: NJPEN.

Five Philadelphians have been charged in an interstate weapons and drug trafficking ring that authorities say offered “ready profits” for those willing to exploit Pennsylvania gun laws to sell to buyers in New Jersey.

In searches last week, local, county, state, and federal law enforcement recovered 36 guns—including one linked to two separate shootings of a toddler and an infant—three partial sticks of dynamite, an estimated $45,000 in methamphetamines, and quantities of heroin, crack cocaine, and marijuana.

Dubbed “Operation Zombie” for the street name of the alleged ringleader of the group, 32-year-old Robert “Zombie” Crosley, the case took detectives on a nine-month investigation on both sides of the Delaware River.

Crosley was arrested January 22 in Camden as he allegedly tried to sell weapons, meth, and hollow-point bullets to an undercover officer.

Police claim that he obtained the weapons by paying straw purchasers to buy them at shops and gun shows in Pennsylvania. Crosley would then allegedly text photos to customers in New Jersey, sometimes delivering the goods the same day. From March 2019 until earlier this month, the group allegedly sold 16 guns in the Camden City area.

Zipf is alleged to have helped both with straw purchases of guns and to have driven Crosley, Zoba, and their contraband into New Jersey to complete the sales. She was released on bail in Pennsylvania.

Two other alleged conspirators, 44-year-old Michael Snyder and 39-year-old Yuri Lyubinskiy, both of Philadelphia, were also accused of having driven Crosley and Zoba into Camden as part of the deal. Snyder and Lyubinskiy have both been charged but not yet arrested. 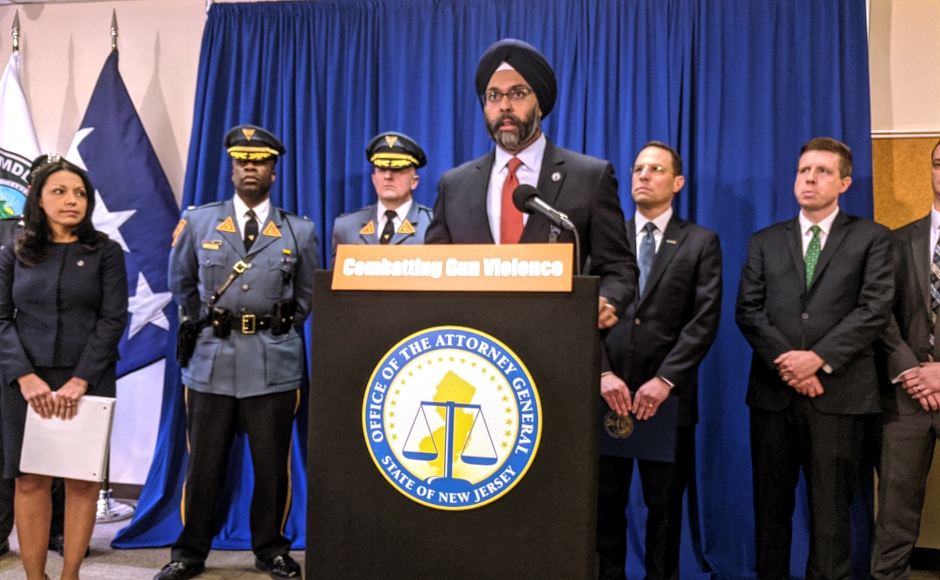 “This operation shows clearly how gun traffickers exploit gun laws and loopholes in states like Pennsylvania, and how these weapons end up in the hands of criminals in states like New Jersey,” said New Jersey Attorney General Gurbir Grewal.

“Four of five crime guns recovered in New Jersey in 2018 originated outside our state,” Grewal said.

“Pennsylvania was one of the leading sources.”

Two-year-old Nikolette Rivera was killed when gunfire ripped through her Kensington home, and a day after, 11-month-old Yazeem Jenkins was critically injured when his father allegedly used him as a human shield in a drug buy gone wrong.

“The AK-47 was traced to one of the more horrifying criminal actions that we’ve seen in the city of Philadelphia,” Shapiro said. “In 24 hours, this assault rifle claimed the life of a 2-year-old child and injured an 11-month baby.

A gun used in a crime can be used in an average of “about five different criminal activities,” Shapiro said, making the job of getting weapons off the street of the utmost importance. 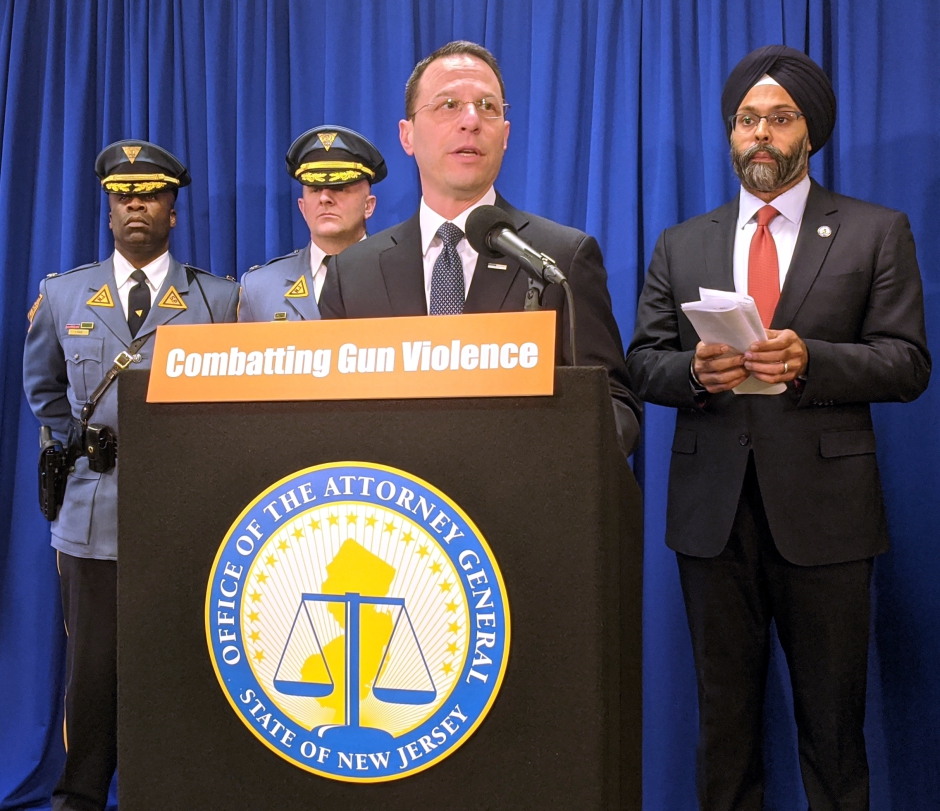 “Crime guns do not adhere to city, county, and state borders, and they have a nasty tendency to pop up in multiple crimes, like those we have confiscated today,” he said.

“In the past, trafficked firearms that crossed state lines seemingly vanished, which allowed them to change hands more and more and claim more and more lives,” Shapiro said.

“These illegal guns should not be allowed to disappear.”

In the absence of legislative reform, Grewal and Shapiro announced a new collaborative effort between both their offices to help track “community guns” that can get passed around and used in the commission of multiple offenses.

“As things develop, we share them, and that’s our commitment to work with our partners across the river,” Grewal said. “Each gun taken off the streets and out of the hands of criminals is another life saved.”

“The more we can share information, the quicker we can track and trace these crime guns,” Shapiro said. “Certainly, it will help us solve crime faster, but ideally, it will allow us to save lives.”

While Grewal praised the stringency of New Jersey gun laws that limit the impact of gun violence within the state, Shapiro blasted “legislators in Washington and Harrisburg who… have no interest in making progress on commonsense gun reforms,” like background checks.

“As we do our part, others need to do theirs if we are going to save lives,” he said. “These shootings are corroding the souls of our cities and fracturing families for the rest of their lives. We shouldn’t stand for that as a society. 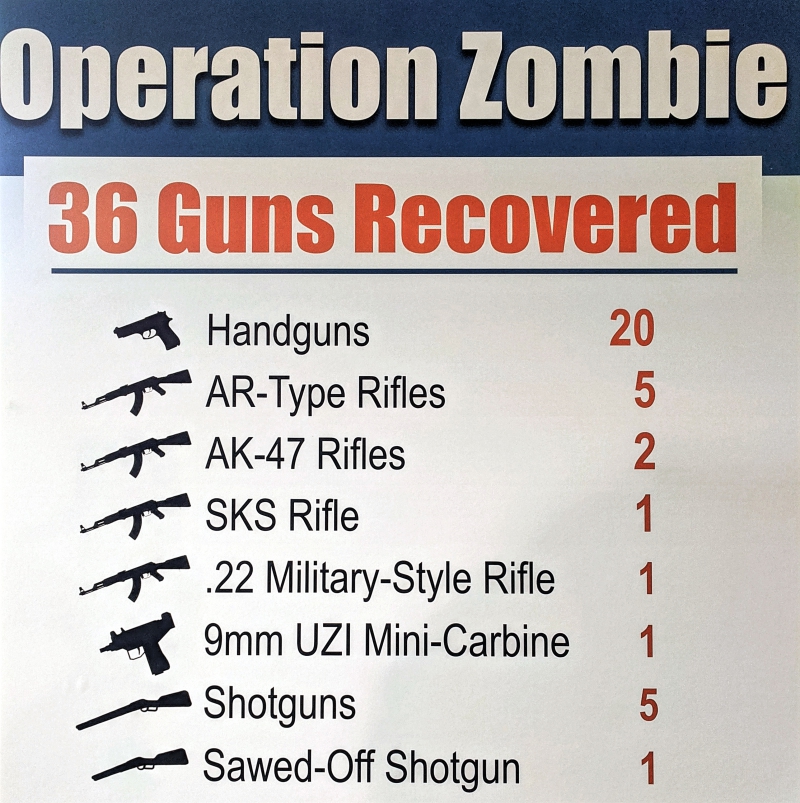 Weapons recovered in Operation Zombie, according to police. Credit: NJPEN.

“It is a choice that policymakers are making to do nothing in the face of this violence, death, and destruction,” Shapiro said.

Crosley and Zoba have been charged with first-degree promoting organized street crime, first-degree distribution of methamphetamine, and second-degree possession of a gun by a convicted felon.

In addition to hefty fines, those crimes carry sentences of 10 to 20 years in state prison, which much be served consecutively with sentences for underlying offenses.