Police said Fernando “Gordo” Diaz-Rivera and 14 associates allegedly ran a heroin and cocaine operation that supplied the bulk of the region with drugs tied to Mexican cartels. 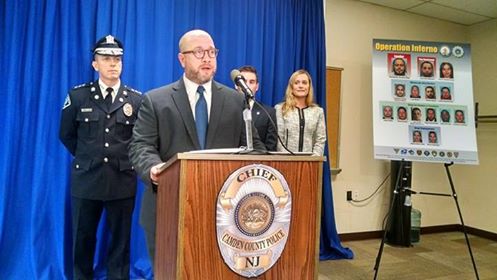 A seven-month multi-agency bust dubbed “Operation Inferno” because its alleged ringleader was “the hottest target we could get,” according to New Jersey Attorney General Christopher Porrino, culminated in the arrest of 15 men and women allegedly operating the largest drug in Camden City and North Philadelphia.

The top name on that list is Fernando Diaz-Rivera, 33, known by the alias “Gordo,” who is alleged to have distributed heroin and cocaine throughout the region via wholesale deals and independent drug sets.

Camden County Police Chief J. Scott Thomson described Diaz-Rivera as a suspect who was “on our radar but off the grid,” and who is already in federal custody in Puerto Rico on a weapons charge.

Porrino described Diaz-Rivera as one of the top suppliers of heroin and cocaine in the region, allegedly coordinating the movements of several wholesale distributors and drug suppliers through his alleged lieutenant, Luis “Moodo” Ortiz-Merced, 33, of Philadelphia; and Karina Olmeda-Burgos, 21, of Salem City. Olmeda-Burgos was Diaz-Rivera’s girlfriend, and allegedly handled the money from the network “in accordance with his directions,” Porrino said.

The suspects allegedly “used guns and violence and threats of violence” in the execution of the drug trade, Porrino said, adding that the investigation remains ongoing.

“That drug trade directly fuels the violence that goes along with street-level drug dealing and perpetual violence,” Porrino said. “By shutting them down, we’re making the city safer, and reducing the flow of these deadly drugs into South Jersey and Philadelphia.” 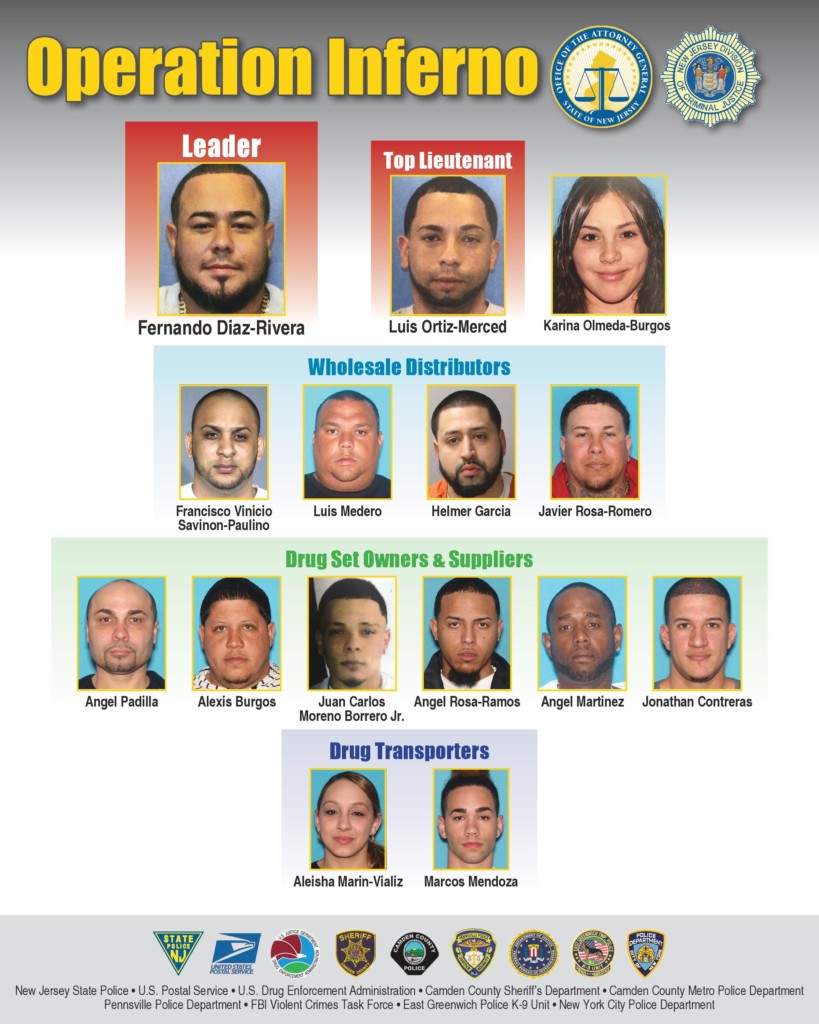 Ten of the suspects were arrested yesterday and are being held in the Camden County Jail with bail amounts ranging from $250,000 to $400,000. Two are sought on warrants, and three were already in custody, including Diaz-Rivera and Ortiz-Merced, who is being held in Philadelphia on a weapons charge.

Diaz-Rivera, whom Porrino described as “one of the top suppliers of heroin and cocaine in Camden and Philadelphia, if not the top supplier,” faces first-degree charges of leading a narcotics trafficking network, which carries a sentence of 25 years to life without the possibility of parole and a $750,000 fine. His arrest will contribute to “the dismantling of a drug trafficking organization that is going to help us at the local level increase the quality of life for people in our city,” Thomson said.

“Open-air drug markets unfortunately negatively define the lives of the people that are there,” the chief said, describing an overdose trend that has claimed 70 lives in Camden City alone—80 percent of whom he said are non-residents.

“Operations such as this are going to give us the ability to help mitigate that,” Thomson said. “Does locking up a drug dealer get rid of personal addiction? No. Does choking off the supply end it? No. But it’s a piece of the puzzle.”

Porrino downplayed the prospects of a power struggle or subsequent violence to follow in the wake of the arrests.

“There are operations here being led by Chief Thomson,” the attorney general said. “A close eye is on the activity as we speak. If we detect violence, we’ll act. I’m not sure there’s going to be an outward, visible struggle for power. If there is, we’ll take action.”