Inspired by the successes of similar Safe Zones in other towns across the country, the department said its free, 24-7 monitored site will allow for smooth custody and property exchanges and reduce crime. 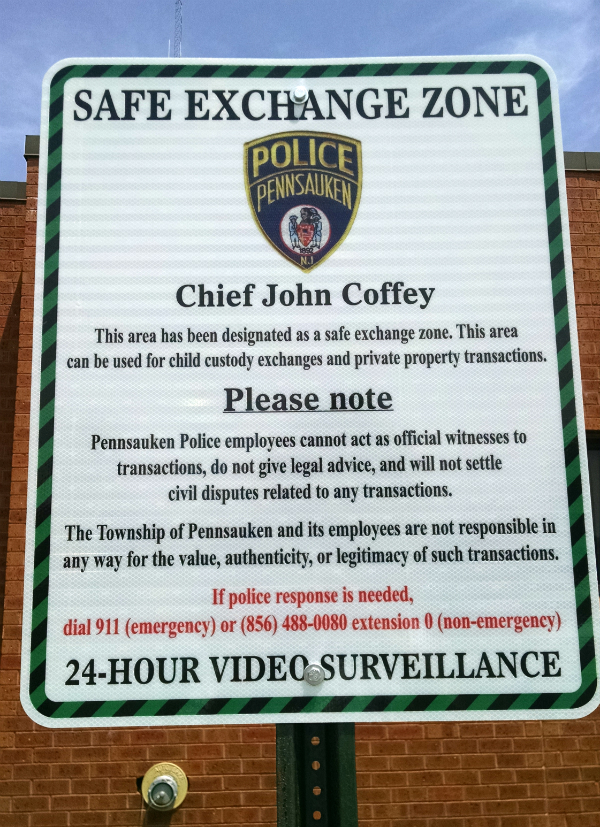 Every year, Pennsauken Police handle thousands of calls for service for everything from loose animals to violent crime.

On Wednesday, the department unveiled its newest tool for reducing crimes involving sales of private property and child custody exchanges: a vacant lot.

Occupying the approximate square-footage of two parking spaces, the new Safe Exchange Zone is a 24-hour, video-monitored area in front of the township police station that authorities said can offer a safe place to meet.

“We thought there was a need for it,” said Pennsauken Police Chief John Coffey.

Coffey said his officers frequently are called to investigate private transactions that have resulted in thefts because they occurred in remote areas of the township, especially the sales of quads and ATVs.

The Safe Exchange Zone will make use of lights, cameras, and officers on duty to create a worry-free environment for such deals. It can also serve as a warning for parties who object to meeting on the site that their transaction might not be safe to conduct altogether.

“If someone doesn’t want to meet here, there’s a problem,” Coffey said.

Pennsauken Mayor John Kneib said construction of the Safe Zone was timed with recent LED lighting upgrades to the department parking lot. Combined with the pavement striping and an HD camera system, the project cost about $30,000. The mayor said it is a negligible expense given the potential savings in manpower from dispatching police to investigate the sites of deals gone bad.

“The camera can shoot to the end of the parking lot, and this lot lights up like it’s daytime,” Kneib said. “We’re trying to eliminate as much of the turmoil that could happen.”

Although camera-monitored safe zones have become popular for guaranteeing the security of private transactions, the Pennsauken site is among the first to be advertised as being used for child custody handoffs as well. Kneib pointed to “quite a few incidents” of “altercations” involved in the exchanging of children, and said he hopes the site will alleviate many of those.

“You offset that [equipment] investment from the number of calls you eliminate,” Coffey said. “We want everybody to see that camera.”

Pennsauken Lieutenant Scott Gehring, who pitched the idea of creating the Safe Exchange Zone after seeing its success for other departments, credited Coffey with being “very receptive” to the idea, and with making funds available to complete the job.

Gehring said he is hopeful the zone will help prevent robberies that occur on the borders of the township, and can be of service to Pennsauken residents as well as to their neighbors.

“We’re going to let everyone know from all the surrounding towns,” Gehring said.