Trending
You are at:Home»Arts»Buttonwood Tree Project Celebrates Persistence of History in Downtown Haddonfield 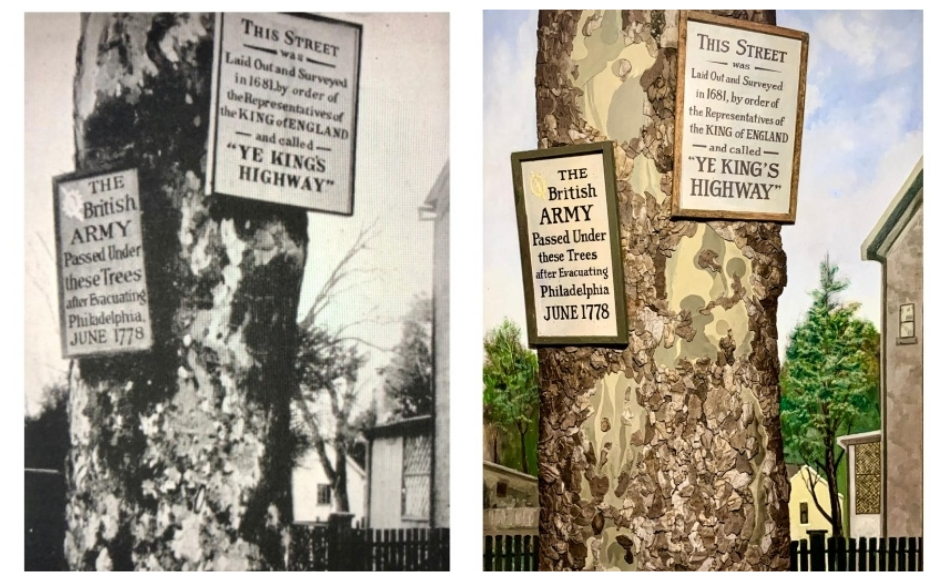 On the left, a photograph of signs posted to a Buttonwood tree in Haddonfield; on the right, a painted recreation. Credit: The Haddonfield Buttonwood Tree Project.

In 2018, after having discovered its trunk was hollow, the Haddonfield Shade Tree Commission ordered the last standing Buttonwood sycamore on King’s Highway to be taken down.

For more than 250 years—a quarter-millennium—that tree bore witness to everything and everyone that passed by on the borough’s main thoroughfare, from colonial-era soldiers, to Quakers on their way to a meeting, to children headed home from school.

In 1899, a local chapter of the Daughters of the American Revolution posted signs to it that denoted its historical significance.

They read: “THE British ARMY Passed Under These Trees after Evacuating Philadelphia JUNE 1778,” and “THIS STREET was Laid Out and Surveyed in 1681, by order of the Representatives of the KING of ENGLAND and called ‘YE KING’S HIGHWAY.’”

Before their removal in the 1950s, those signs, which had by then themselves become historic, were photographed. The image captivated Haddonfield artist John Giannotti, whose reproduction was unveiled in a ceremony on King’s Highway Monday—three years to the day the last Buttonwood had been removed.

Giannotti’s other works in town include “Haddy,” the Hadrosaurus foulkii dinosaur sculpture on Lantern Lane, and “My Dog Blue,” a depiction of expeditioner Robert Peary’s Husky, King, which sits outside the Happy Hippo toy shop. “Buttonwood,” his relief painting of the eponymous sycamore trees, was unveiled halfway between those installations. 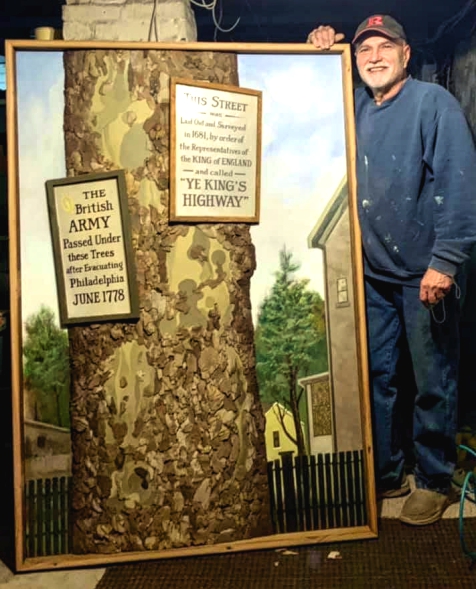 The 66-inches-by-44-inches relief was created with pieces of Buttonwood from the fallen tree that Giannotti shaped to simulate the curvature of its trunk, and to which he later attached bark from the same tree.

The former Rutgers University art professor worked on the piece intermittently for 12 to 14 months with the help of assistant Ben Scott and carpenter Mike Gilson, who built its frame.

“Buttonwood” is one of a series of art projects created from pieces of the historic tree as part of the Haddonfield Buttonwood Tree Project.

Coordinated by borough resident David Hunter, the project delivered remnants of the tree to area woodworkers and artisans in the hopes that they would commemorate its removal with lasting works of art.

Jeff VanderKuip of Haddonfield worked on a Buttonwood drink rail for King’s Road Brewery until he moved out of state. His work was resumed by Moorestown woodworker Jeff Braddock, who transformed it into a table that was installed in the brewery in August 2020.

Giannotti praised their efforts at the unveiling of his painting Monday.

“There is a volunteer spirit here that is quite amazing, and I want those gathered to know how much their work is appreciated,” he said.

Of his own work, Giannotti said he’d been fascinated by the image and knew immediately that he wanted to recreate it for his piece.

“These trees were witness to history,” he said.

“Buttonwood” is available for purchase. It will remain in the future William Heritage Winery storefront (King’s Highway and Mechanic Street) for two weeks before being relocated to the Haddonfield Public Library.