The six-point plan proposed by the Board of Freeholders involves greater service coordination among its own agencies as well as with independent groups that connect with county residents. 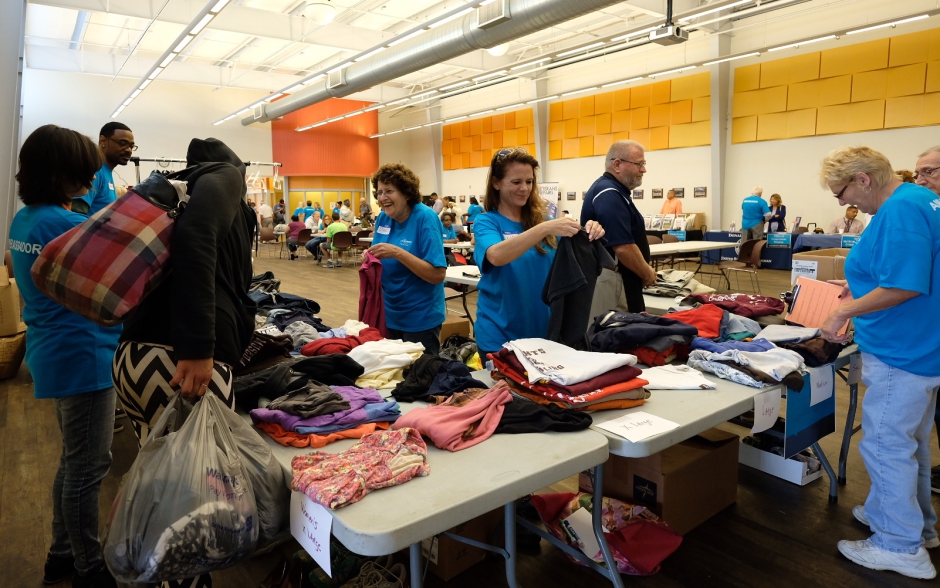 The county government thinks it can do something about those numbers, and on Wednesday unveiled a multi-point plan to address the issue.

“Can homelessness ever be reduced to zero?” asked Freeholder Director Louis Cappelli, Jr.

Homelessness reflects a variety of complicated social conditions, from mental health and addictions to joblessness, disaster recovery, and re-entry to civic life after prison, said Freeholder Carmen Rodriguez. That can make it difficult to define precisely who is homeless and what services they need. The new push is intended to streamline the intake and assessment of some of the most vulnerable people in the county, she said.

“When you have to go from one agency to another, that in itself becomes a hurdle,” Rodriguez said, “especially when you are at risk of losing your job, or possibly losing your child, or your property, which you could lose because you leave it unguarded.

“The answer to our problems begins with our agencies doing what they do best in collaboration, and then filling in the gaps,” she said. “Let’s get people housed and help our community grow.” 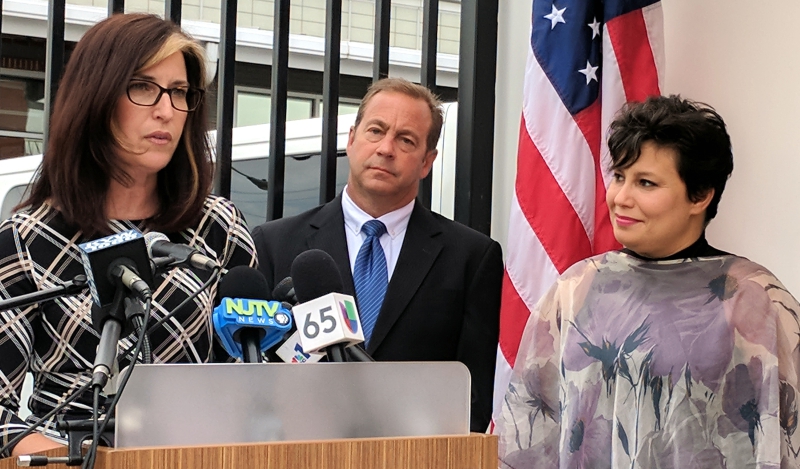 As Rodriguez outlined it, the county’s six-point plan includes:

“It is our hope that this coordination will bring the services to the individuals who need them rather than requiring these individuals to chase after these services,” Rodriguez said.

The Homeless Navigator Initiative is one among a handful of safety-net initiatives administered by the Volunteers of America Delaware Valley (VOADV). Its Chief Operating Officer, Pat McKernan, said most of the efforts will be coordinated through a single point of intake at the VOADV shelter at 1812 Federal Street in Camden, and that the project is “changing the paradigm of how we provide social services.

“Clients don’t do well with fragmented care,” McKernan said. “It’s our responsibility to make sure that they are engaged and led into services that they want to participate in.”

McKernan said the agency will measure the success of the program by tracking the number of times its representatives encounter people on the street, how many engagements people have before they join the program, and how many enroll in services overall. 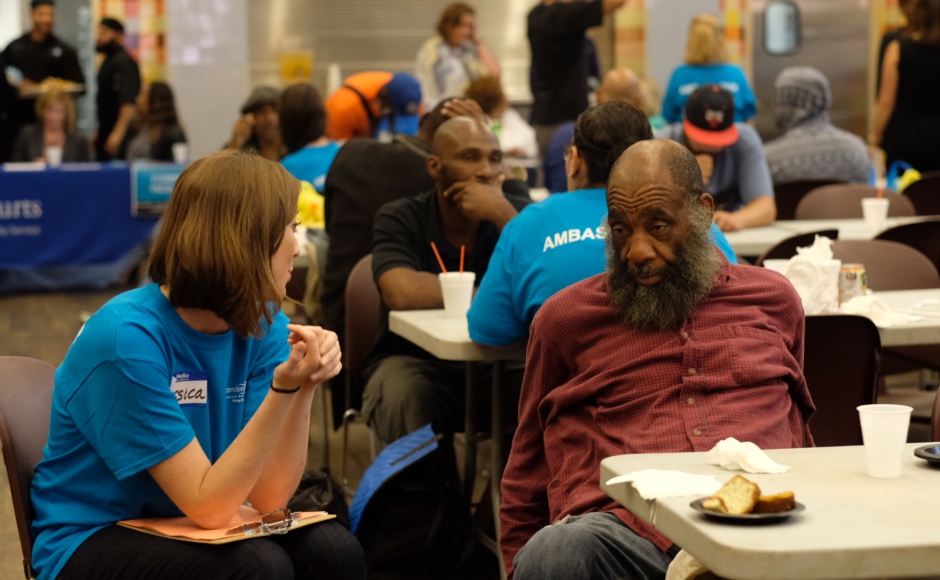 “A lot of that is relationship-building,” McKernan said.

“I see us as navigators, advocates, and being the person who helps.”

At the Cathedral Kitchen in Camden City, representatives from VOADV and a dozen or more city, state, county, and private agencies greeted some of the people they were tasked with helping.

Among them was Nigerian refugee Olajuwon Onadipe. He said he’d only been on the streets for a week, but has had difficulty finding work or housing because of his citizenship issues.

Onadipe has a sister in Sicklerville who couldn’t put him up in her home. He came to America to flee the violence of Boko Haram, an armed paramilitary group that has terrorized his native country for the last 15 years.

Of course, living on the streets of Camden is “not the best at all,” either, he said. Onadipe uses the shower at Joseph’s House of Camden, but said his greatest need is a day job that will afford him some regular income.

“It’s difficult because it’s hard for me to get food and accommodation,” Onadipe said. “They told me I need to wait for 30 days until the Board of Social Services can help me.” 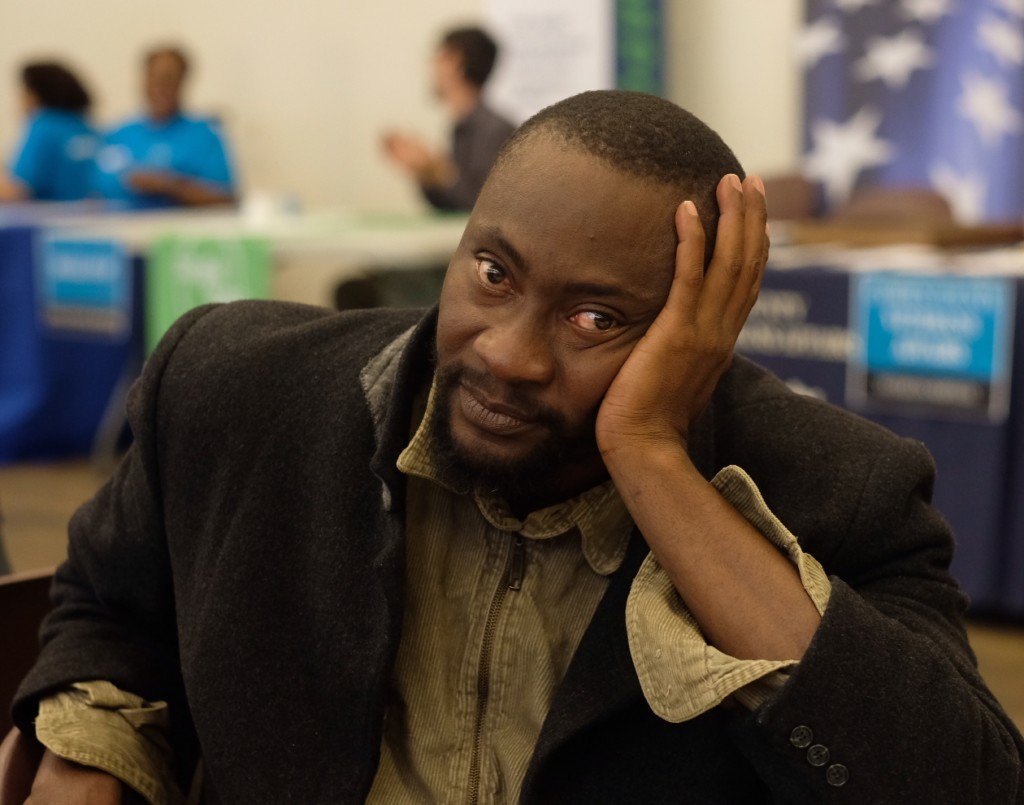 Olajuwon Onadipe said he came to the United States to flee Boko Haram in Nigeria but can’t get services because of his legal status. Credit: Tricia Burrough.

Sixty-two-year-old Darrell Dupree said he’s lived in Camden City all his life, but has spent the last three or four months homeless.

Dupree had a place to live for a while, but “there was no more room,” and now he’s on the streets.

He has daughters in the area, but said, “they’re handling their own lives” and he doesn’t want to intrude.

Dupree collects Social Security, but doesn’t have enough money to make rent in the city.

“They’re tearing down a lot of stuff, but they’re not building enough places for people to live,” he said. “They’ve got people coming from everywhere because Camden is the place where they can get housing. But after that, then you’re stuck sleeping outside.

“Then you’ve got the cops,” Dupree said. “They don’t want you laying here, laying there; they wake you up, and you wind up going back. I had a guy at 4th and 101 punch me in the head for no reason, telling me I woke him up. This is nobody’s home.”

Dupree, who worked as a cook most of his life, said he’s tried to enroll in services before but found himself stonewalled at various points of the process. He believes his circumstances are not uncommon.

“It’s hard getting in the plan, period,” he said. “I don’t have receipts for where my money went. If I’m addicted to drugs or alcohol who’s gonna give a receipt for that?” 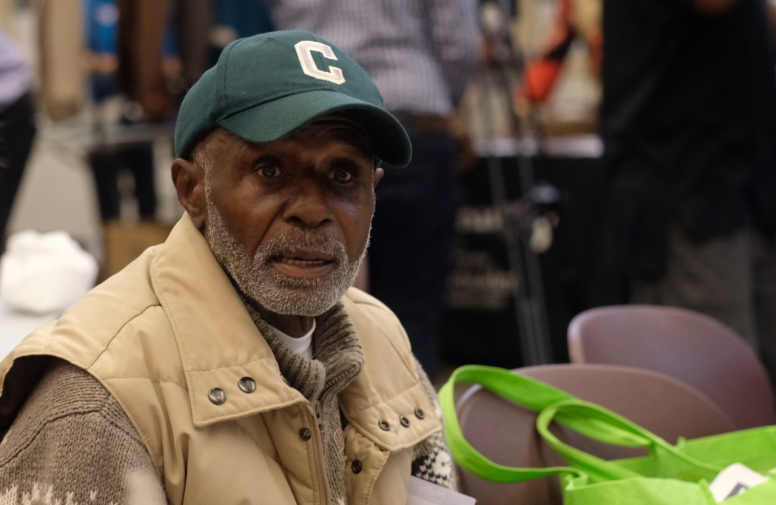 Darnell Dupree, 62, said he has been homeless in Camden City for a few months. Credit: Tricia Burrough.

“A lot of people don’t even think like that,” Dupree said.

“They think, ‘They’re going to ask me a bunch of questions and turn me the other way.’ I don’t know.”

Erin Crean, Camden County’s Director of Community Development, said the problem of homelessness in the city is “humbling.”

In the summer, many people camp out in wooded areas or under overpasses; in the colder months, they frequent “abandon-miniums,” the city’s empty homes and warehouses, seeking shelter from the elements, she said.

“People migrate, and they are habitual,” Crean said. “We see the same people in the same locations.”

Crean is hopeful that the VOADV navigator will help agencies locate and care for the homeless, the better to enroll them into services. She related the story of a Gloucester Township man who was living behind the sound barrier on I-676 when she met him; a post-surgery opioid addiction had cost him his job and marriage.

“The navigator system is going to make a huge difference, because you have to be able to provide service at that moment when somebody says they’re ready. Four hours later, they may not be ready anymore.” 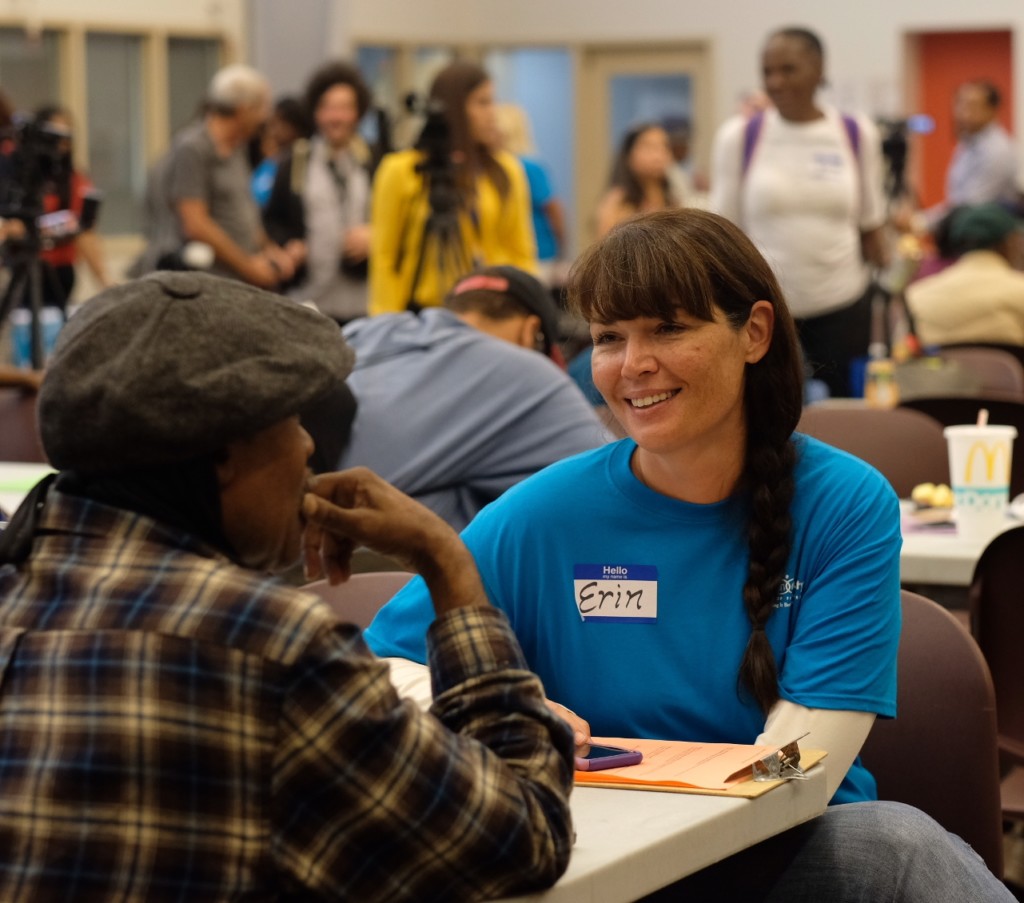 Crean also described a formerly homeless woman she was able to enroll in detox services.

From there, the woman moved to an inpatient facility, and then a sober living facility in Ocean City.

“She had been using her entire adult life and she’s in her forties.”

Crean believes the plan will work if all agencies involved are persistent and collaborative, “breaking down the silos that exist in the social service world, bringing everybody to the table, figuring out what our resources are, using them wisely, and not duplicating services.”

Camden County performed its most recent point-in-time homeless count in January 2017, according to which 540 people across 451 households were homeless. That’s down by 143 people, or 107 households; about a 20-percent year-over-year change. Camden County is home to 6.3 percent of New Jersey’s homeless population this year. 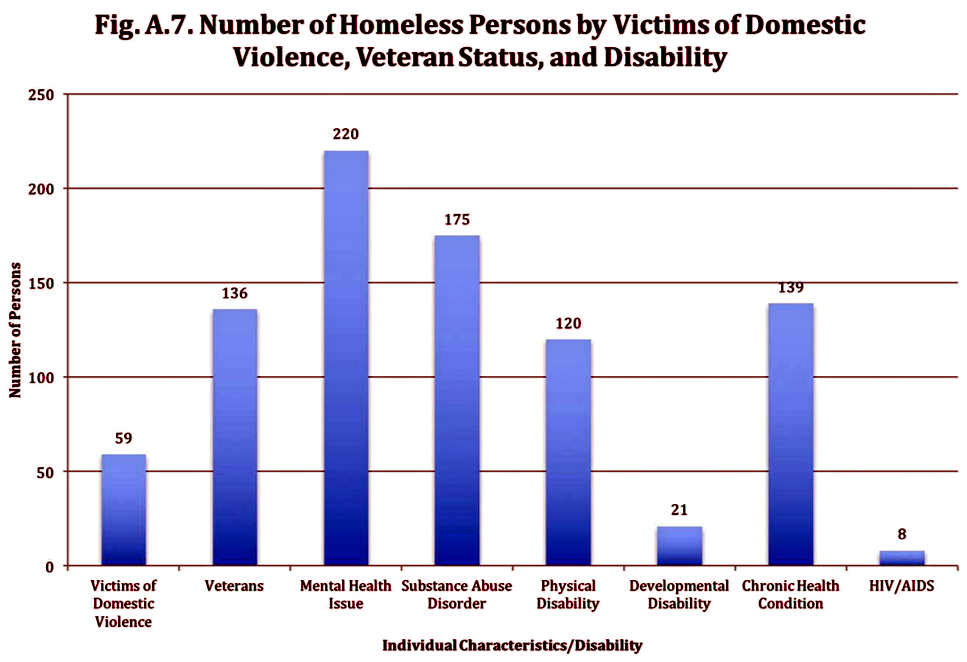 In the 2017 count, the majority of homeless people reported some kind of chronic health condition, from mental and physical ailments to substance abuse issues.

The top reasons they gave for their circumstances included being asked to leave a shared residence, losing their job or source of income, and eviction or the threat of it.

Some of the outreach, which includes day work in the county parks and public works departments, is modeled after seasonal employment programs that demonstrated success in Albuquerque, New Mexico and Portland, Maine.

Its social-service and housing approaches are based on results produced by the Camden Coalition of Healthcare Providers; Keashen said 20 housing units throughout the county have been occupied since the program rolled out. Another arm of its services includes outreach to help incarcerated people transition to life outside of prison, without which there’s “a direct pipeline to homelessness,” Keashen said.

“The biggest thing, more than anything else, is having an umbrella to our nonprofit vendors,” he said. 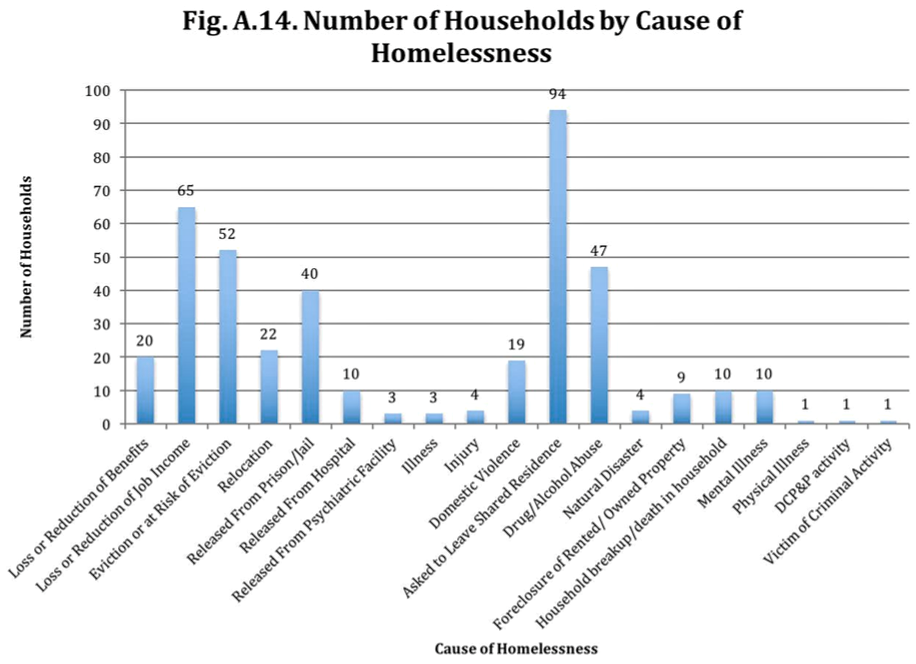 In addition to providing services and tracking data on the issues around homelessness, the independent agencies with which the county government can partner often have access to their own sources of funding.

A $650,000 federal justice grant will provide the basis for a post-prison re-entry program the county will roll out in the fall; that will be supplemented further by the $2-million state grant that backs the Volunteers of America navigator and re-entry programs.

The day-work programs are part of a $40,000 line item in the county budget for parks cleanup and other services. The county Homeless Trust Fund will also be tapped to seed future initiatives, Keashen said.

For more information about services, check out the Camden County Resource Compass here (and read more about it in our coverage of its launch here) or call the Homeless Hotline at 800-331-7272.