Staffers from the Volunteers of America Delaware Valley coordinate with police officers in Pine Hill in a new program model that will help ‘stabilize’ residents in need of help wherever they are. 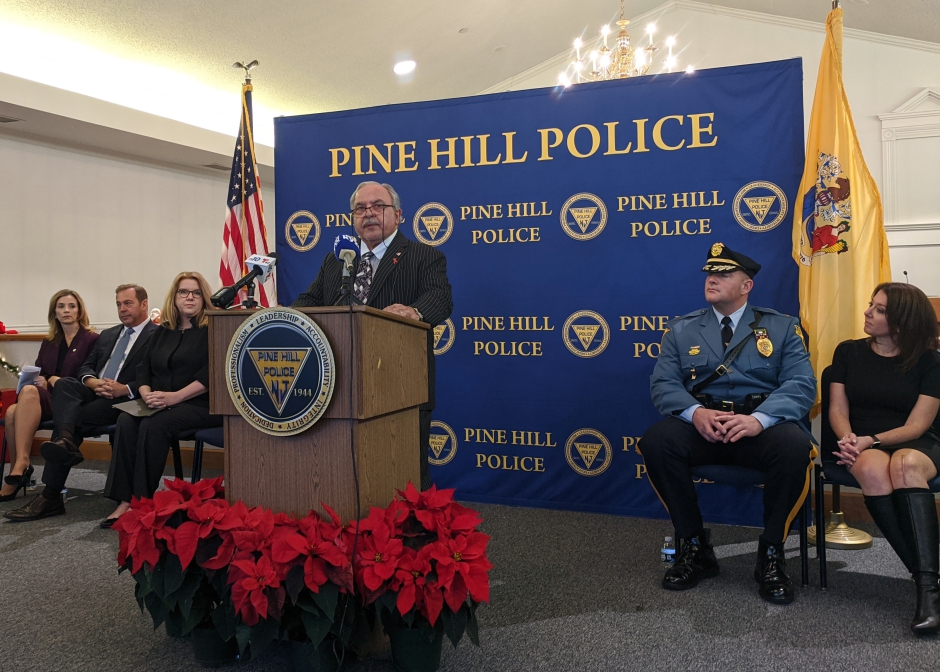 For the past month, the borough of Pine Hill has experimented with a new program designed to support its residents with social services at any point of contact.

These case managers are integrated within the borough police department, connecting people in the four-square-mile community with access to housing, mental and behavioral health services, addictions counseling, and more.

Their operations are funded by a grant from the state Department of Human Services (DHS) that provides staffers from the Camden City-based Volunteers of America Delaware Valley (VOADV) for eight hours a day, Monday through Friday.

For the people helped through the partnership, the impact of their outreach extends far beyond those hours, said Pine Hill Police Chief Christopher Winters.

In his words, the expanded partnership “further enhances officers’ ability to serve our residents with distinct needs,” helping “to develop a collaborative solution to stabilize the homeless and at-risk population” of the borough.

The town’s social problems include housing instability, mental illness, and the opioid epidemic, the chief said.

Winters stressed that the program offers “the opportunity for engagement at every point of contact,” including street-level encounters or calls for service, families in crisis, emotionally disturbed individuals and overdose victims, and those encountered via the municipal court system or at the point of arrest.

VOADV workers share a workspace within the Pine Hill Police Department, and are able to address issues as they come in from there. Sometimes scenes must be secured before the social services staffers are notified; Winters said the encounters with the public are “fluid and dynamic.” 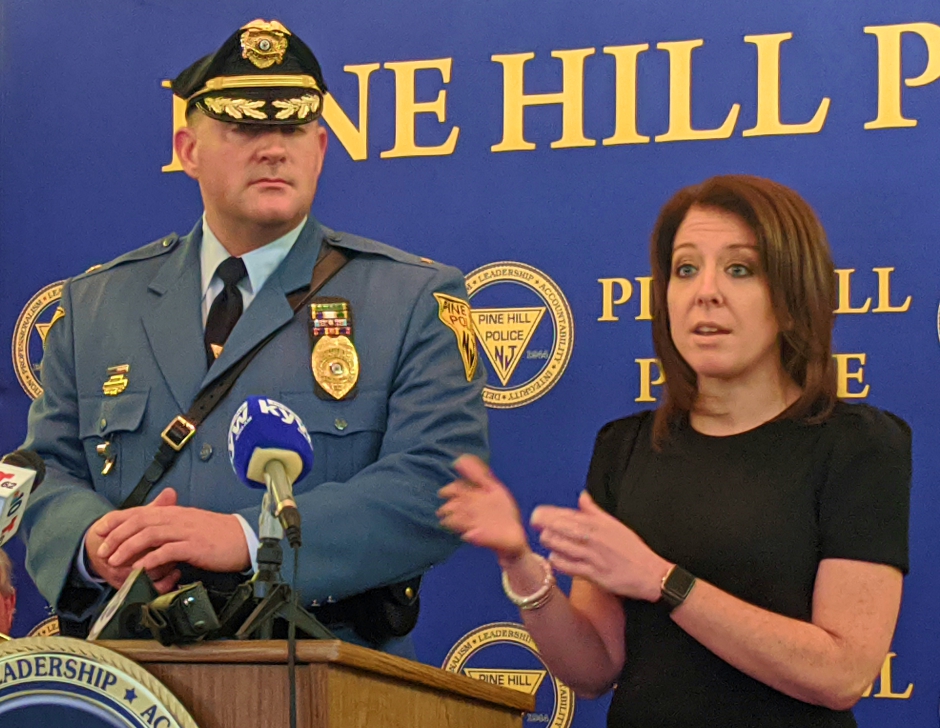 Its staffers on the Immediate Mobilization Police Assisted Crisis Team (IMPACT) group “meet people wherever they are,” she said.

“[Our] mission is to transform lives, reduce recidivism, and to improve public health and safety,” Leese said.

“We are that component that stays with them as they go through the system. We do not discharge.”

In the first month of program operations, Leese said the IMPACT team, which comprises a full-time case manager and two outreach staff, connected with 43 people in Pine Hill. Twenty of them accepted referrals for services. Leese praised the groundwork that’s already been done by Pine Hill police in building faith with residents to make them willing to try the program out.

Although the program will help to reduce the crime rate as well as the rate of recidivism in the community, its primary purpose is to identify people who are struggling and help them get what they need to get back on their feet, Winters said.

“It really is about the stabilization of individuals so they’re able to reintegrate back into the community,” the chief said. “We’re dealing with individuals much sooner than their engagement with the criminal justice system. It’s a prevention piece. 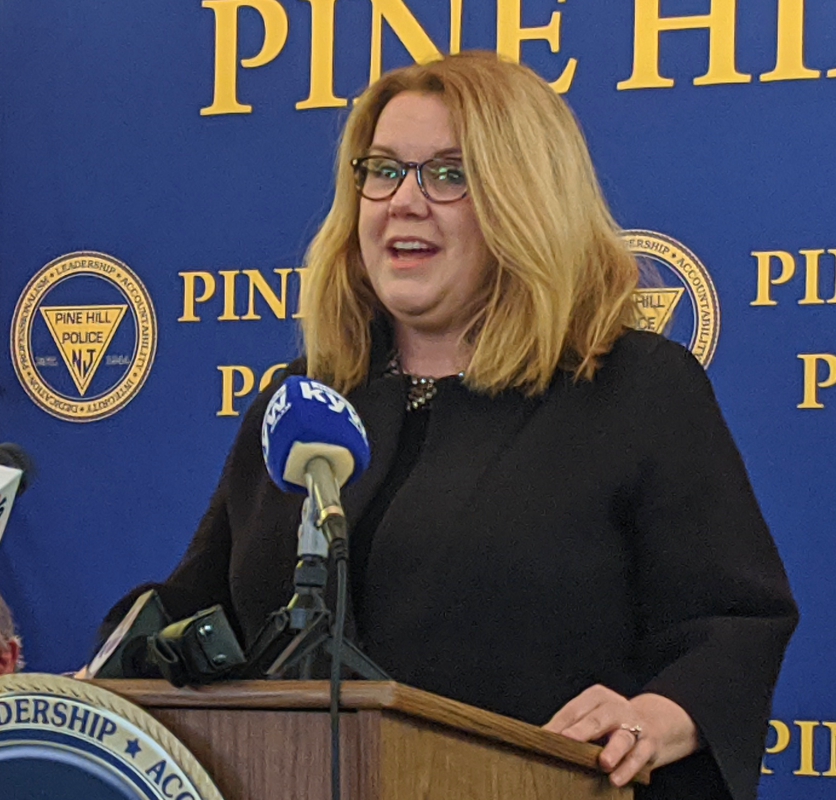 “We’ve had domestic violence arrests where we’ve been able to stabilize both parties, street encounters, connections with school districts, where 70 students were classified as homeless,” he said.

“It’s mission-driven service delivery. We share resources and function as a true team.”

Among some of the early successes of the program, case managers were able to advocate for a family with school-aged children that had had its utility services cut off.

In another instance, Pine Hill police were able to help lift some $2,500 in warrants for a woman who presented at the station to check into a detox program.

VOADV staffers connected her with an inpatient bed that evening, a challenging request for 5 p.m. on a Friday.

“Her life was saved,” Leese said.

The program is funded by a $2-million DHS line item for this integrated approach in Camden and Atlantic Counties, sand New Jersey DHS Commissioner Carole Johnson. She called the agreement “a model for the work we’re going to do across the state.

Johnson said both agencies reflect “a shared commitment” to a partnership among judicial, law enforcement, social services, and healthcare agencies.

“We fund food assistance and housing assistance, but it’s the connectivity and case management [that are needed]  to make sure that [people]  get connected to those services and are able to access them,” she said. 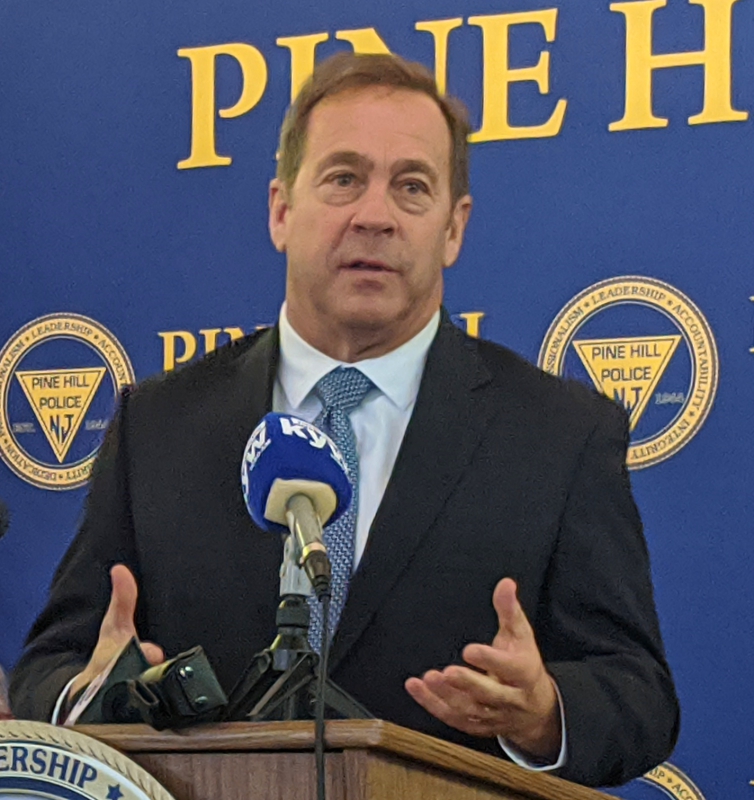 Camden County Freeholder-Director Lou Cappelli said that such partnerships are critical in managing public health crises like homelessness and opioid addiction, which he described as epidemic challenges that have been exacerbated by a shortfall of funding on a national level.

“We’re not given the federal resources to fight these problems, and they’re so intertwined today,” Cappelli said.

“We are fighting this epidemic in partnership with law enforcement, and that speaks to the professionalism of all the chiefs in Camden County, who’ve saved countless lives in Narcan deployments,” he said.

“And we could not address homelessness in any manner in Camden County without the dedication of everyone in the VOA.”

Acting Camden County Prosecutor Jill S. Mayer said that the integrated partnership will help law enforcement “to get at the core of the behavior and circumstances” that lead to people encountering the criminal justice system.

“The ‘why’ is often a secondary inquiry, if at all,” Mayer said, “but as we’ve seen in this new era of 21st-century policing… we can no longer address crime at the back end, and exclusively rely on penalties to deter future criminal conduct. We have to focus on the front end and what can be done as a community to prevent it from happening again. 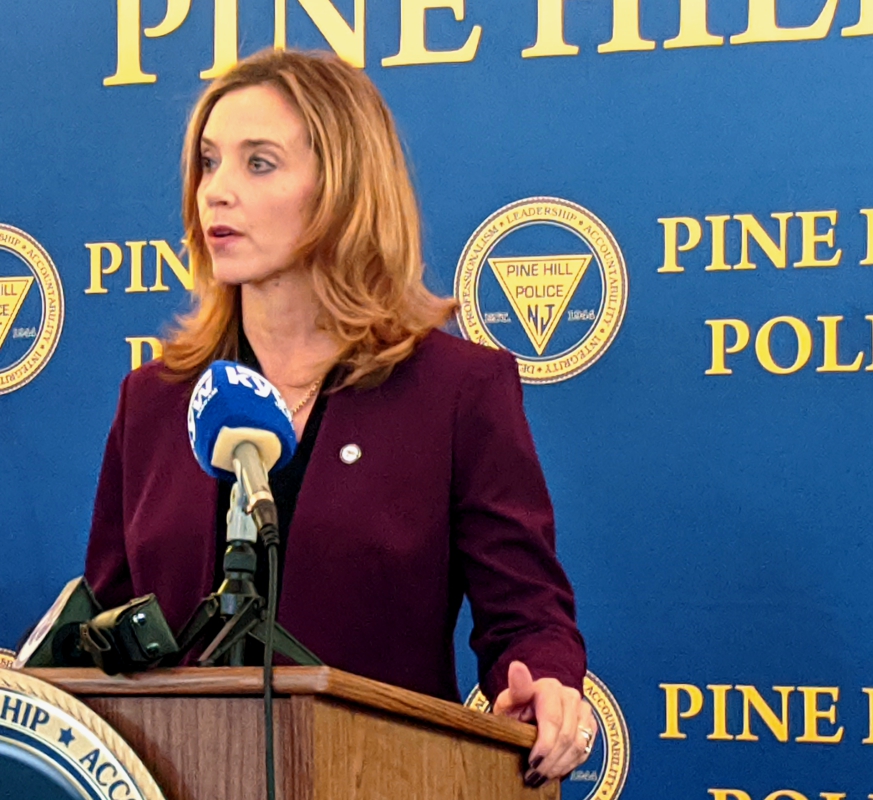 “Here, the Pine Hill Police Department is not only getting involved on the front end, but they are getting involved in the middle, and coordinating meetings with arrestees in jail, and then again on the back end by helping individuals with reentry after incarceration,” Mayer said.

“Partnership with VOA is truly a 360-degree approach.”

Officials from both agencies expressed their optimism that, if the program could take off in the tiny community of 10,000, it could be inexpensively reproduced throughout the county.