A group of organizers gathered at the former proposed site of a grocery store to ask whether the city’s revitalization is benefiting residents who need their basic economic needs met. 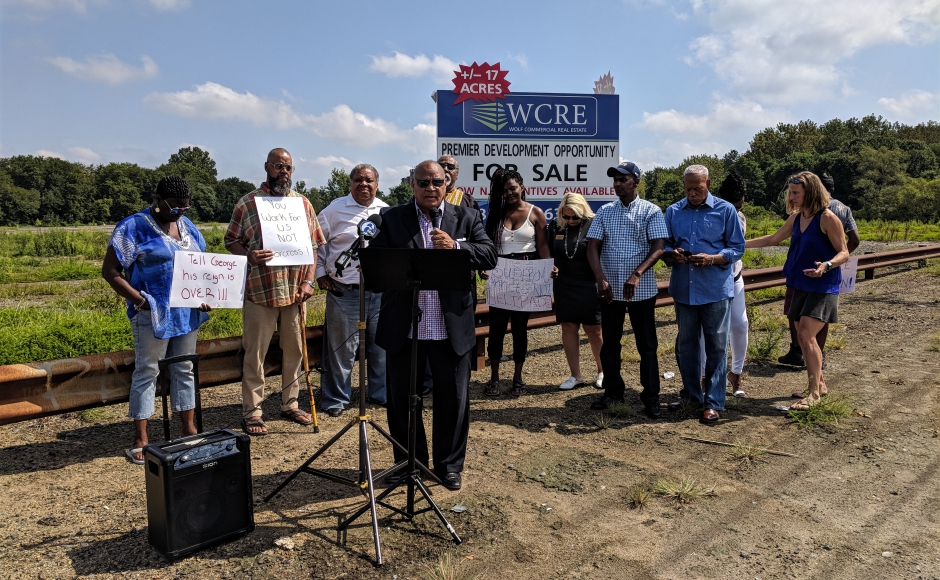 On Thursday morning, a handful of Camden City organizers gathered in a dirt lot on Admiral Wilson Boulevard.

They huddled before a real estate billboard advertising some 17 acres of undeveloped land as a PREMIER DEVELOPMENT OPPORTUNITY eligible for Grow NJ tax incentives.

Nobody there could quite recall what the site had once held, but that didn’t matter.

They were there to talk about what it had never become—namely, a modern supermarket—despite developers once vying for the chance to build the first large-footprint grocery store in the city in decades.

“Behind us, it might appear to be a vacant lot,” said Amir Khan of the Camden We Choose coalition. “What it really is, is a crime scene.”

Khan railed against the “false-promise, sleight-of-hand, smoke-and-mirrors” makeup of the 2013 Economic Opportunity Act (EOA), which he claimed was written to favor one of the two supermarket proposals over the other.

Last week, Politico broke the news that the EOA bill seemed to have been written specifically to advantage a 75,000-square-foot ShopRite project on Admiral Wilson Boulevard. At the same time, the amended language disqualified a smaller, competing Fresh Grocer project intended for Haddon Avenue.

The ShopRite project had been connected to political power broker George Norcross, Politico reported, via his brother, Philip, managing shareholder at the firm Parker McKay, which helped draft the EOA language. 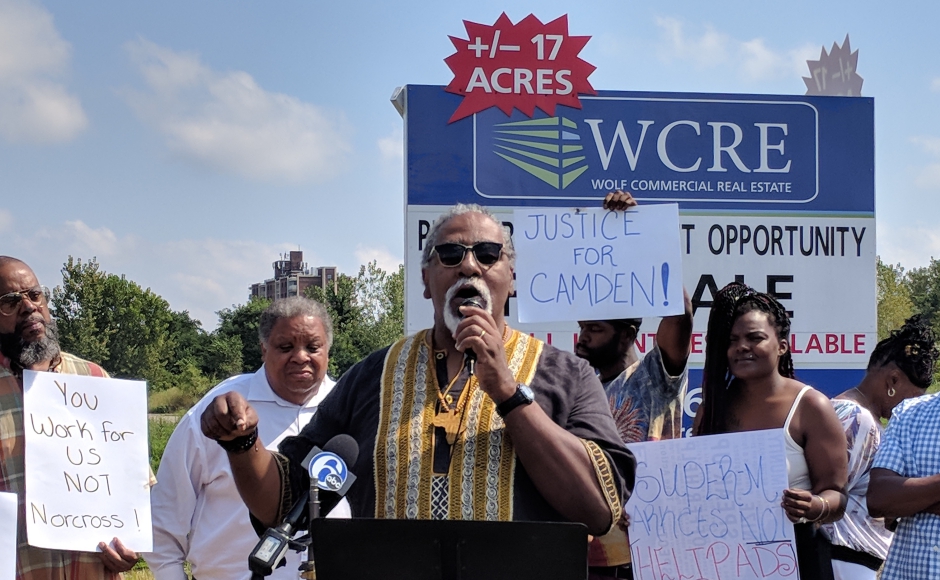 In the end, however, neither plan advanced, and Camden residents continue to want for easy access to affordable food.

“People of Camden are shut out of the solutions for the people,” Altman said. “They want a seat at the table. We need to have real conversations about how Camden can benefit from a supermarket.”

Altman said the group wants a voice in the drafting of whatever economic incentives are to come for Camden. It’s petitioning Gov. Phil Murphy to veto any re-authorization of the EOA that doesn’t include funds to help attract a supermarket developer, let alone without input from the city residents.

Pastor Arnold Stewart of All Saints Evangelistic Movement said the time and money it costs residents to acquire fresh groceries is “a very important issue” in a city lacking economic and employment opportunity.

“When we take away corporations and resources, you make a city feel isolated,” Stewart said. “Residents move into survival mode.” 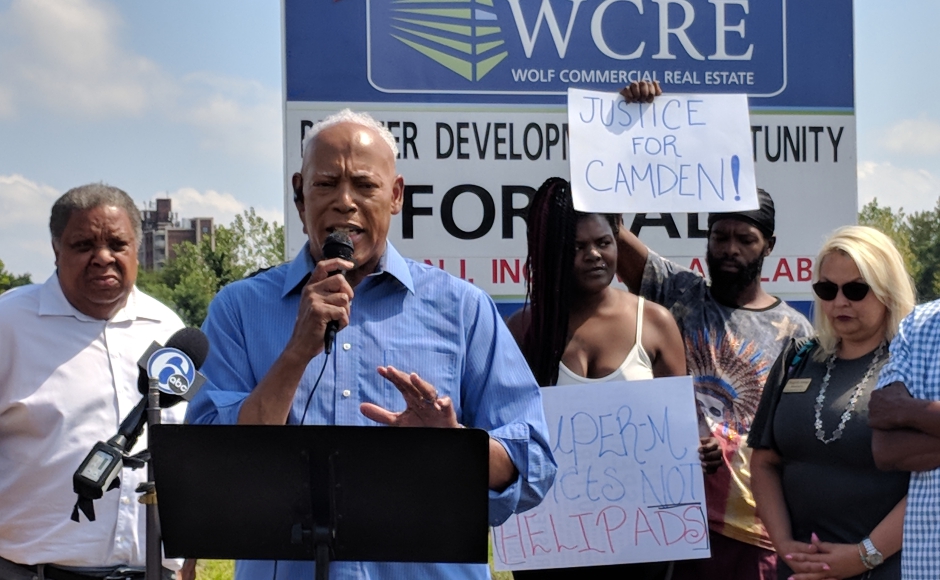 The job of traveling great distances to stock cupboards for families in the city often falls to caretakers like mothers, aunts, and grandmothers, who may have to navigate public transportation and busy highways with children in tow to complete such errands, Stewart said.

“We want something that’s going to be here for us, with fair prices, that we can go to and get home safely,” Wiles said. “Why can’t we have this?”

In the absence of a supermarket, Connie Kellum of North Camden said her neighbors may spend as much as $300 to $400 a month at small corner groceries that she said gouge them on prices.

“We’ve got more [charter]schools than we’ve got food markets,” Kellum said. “I take a lot of people to the stores [outside Camden]. We’re trying to help these young people be independent.”

Margarita Santiago, who runs the Stars Adult Medical Daycare in the Parkside neighborhood, said she transports her clients, some of whom receive food benefits, “to a super Walmart or other supermarkets” because “bodegas price them out.

“By the time the first of the month comes, they owe all the money they’re going to get because they’ve been piecemealing” at the corner stores, Santiago said.

Minister Tim Merrill of the Woodlynne-based Watu Moja outreach group said the lack of access to fresh food in Camden is a moral issue. Merrill said the extra time and travel costs for residents to meet their basic needs is effectively “a surcharge on affordable, delicious food.

“Development is good, but when I can’t buy lettuce or an avocado without going to Cherry Hill or Voorhees, it’s not right,” Merrill said. “Bring the community to the table and have authentic dialogue that determines what is good and right, and do it now.” 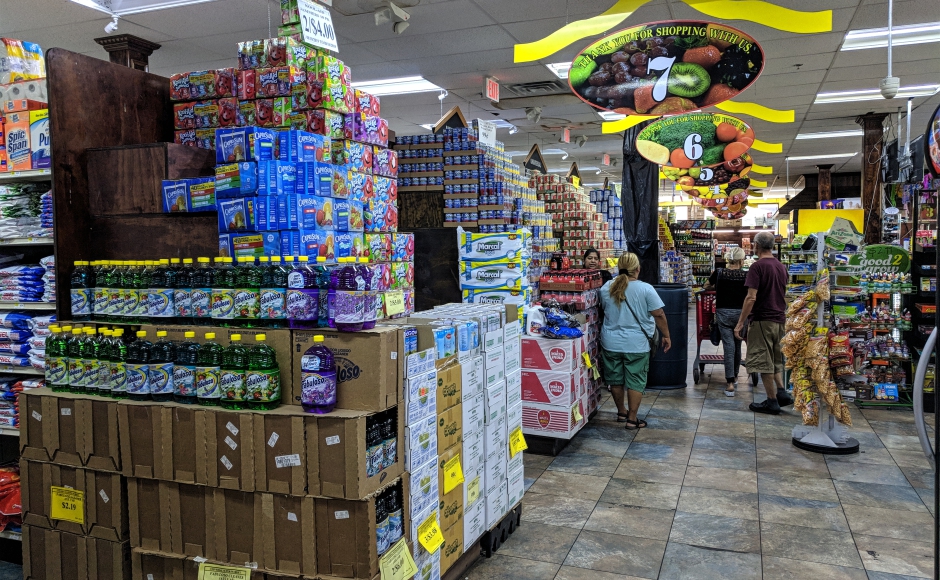 Some of the closest supermarkets in neighboring communities include the Cherry Hill ShopRite and Wegmans stores on Route 70, the West Collingswood Aldi, and the Supremo on Route 130 in Pennsauken.

The handful of supermarkets that does operate in the city includes mid-sized, independent stores like Fayer’s Market in Parkside, and the relocated Haddon Farmer’s Market, which was itself ousted from a prior location on Mt. Ephraim Avenue as part of a Grow NJ redevelopment package that never materialized.

There are also small, regional chains like Cousin’s in the Marlton section (anchored in Philadelphia), Price Rite of Fairview, which is owned by the Wakefern Corporation of Keasbey, and its neighbor, Save a Lot, which is headquartered in St. Ann, Missouri.

Just up the street from the demonstration site at 21st and Federal Streets is another independent grocery, Universal Supermarket. Manager Sandip Patel said his business has seen modest traffic there in a little more than three years of operation; about 3,000 or 4,000 people a week.

The store is sizable, occupying a corner location with parking in the rear. Inside, it’s well lit, with a broad inventory of fresh foods and dry goods. For grocers like Patel, bringing another supermarket to town would definitely create competition as they work to stay afloat.

“It’s already slow here,” he said midday Thursday, as a half-dozen or so shoppers roamed the aisles. “After 2 p.m., it’s dead.” 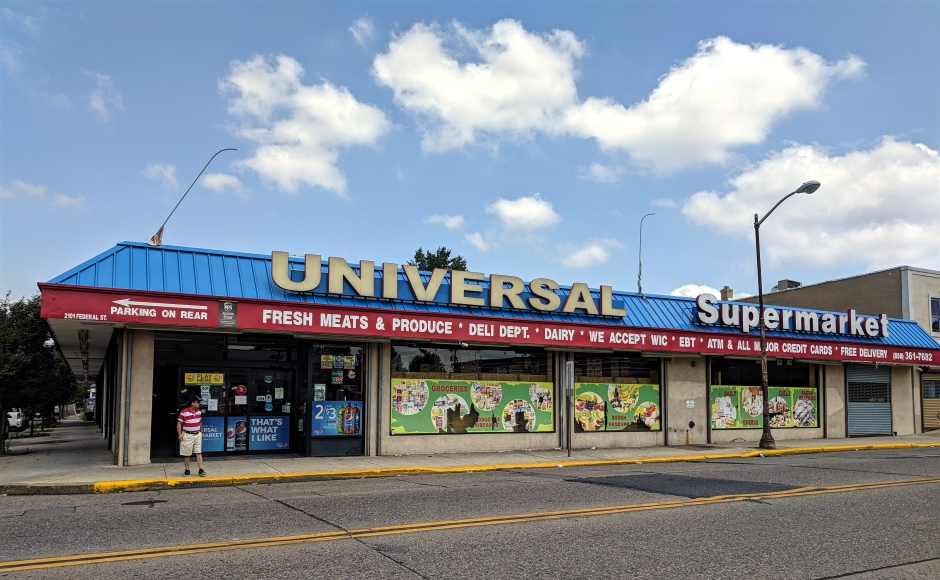 Universal Supermarket is working to find its niche in the Spanish-speaking Dudley neighborhood, printing bilingual shelf tags and circulars, and distributing some 25,000 mailers.

The market also offers a taxi service for any customer who spends $50 or more, but only about five or six people a day make use of it, Patel said.

The company neither sought nor was offered any economic incentive to open in Camden, Patel said. Its ownership group also operates a partner location in Orange.

“We are a small corporation; we buy local supplies,” he said.

Camden City spokesperson Vince Basara said the question isn’t whether local officials are trying to recruit a supermarket into the city, but whether the city can provide enough business for a major grocery store to operate.

Basara agreed that shoppers can’t turn to their corner stores for everything they need, but said their problem is one of “access and economics.”

“It’s not as straightforward as the availability of sites or the willingness to build [a supermarket],” he said. “It’s whether Camden can sustain a supermarket or not. We’d welcome one.”

The conversation has become such a local talking point that even former Camden City Mayor Dana Redd weighed in with her own statement Thursday. Redd, who now serves as the CEO of the Rowan University/Rutgers-Camden Board of Governors, blamed “market forces,” not legislative bungling, for killing off a supermarket deal for Camden. 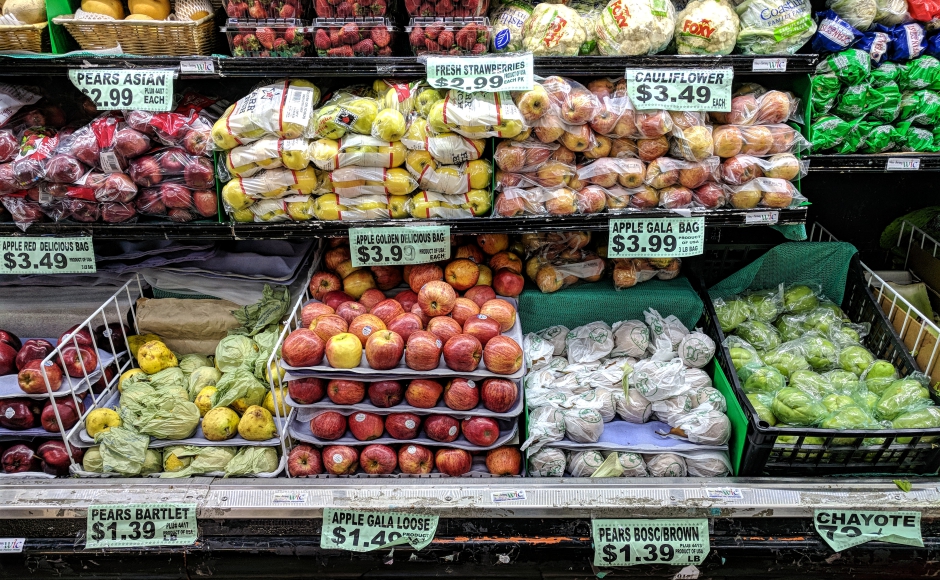 “Unfortunately, Wakefern Food Corporation, the parent company of both proposed supermarkets, rejected the development plans,” Redd said in a statement.

“Wakefern did not feel that Camden was a good location for its grocery stores, regardless of whether the sites would have benefitted from tax incentives.”

Redd’s release goes on to say that the Fresh Grocer project fell through “because the rest of the development, of which it would have been a small part, was never built, despite the developer’s announcement years before the EOA’s passage that it would be.

“I would have loved nothing more than to open a Fresh Grocer or a Shoprite or any other supermarket while I was mayor,” Redd said.

“As a private citizen, I will continue to do everything I can to bring a grocery store here. But our job becomes more difficult when our motives are questioned by those who either misunderstand or misrepresent the reasons why Camden remains a food desert today.”