Given the volume of at-home tests conducted across the state, Governor Phil Murphy regards the staggering infection totals ‘as a floor,’ as hospitalizations hit levels unseen since May 2020. 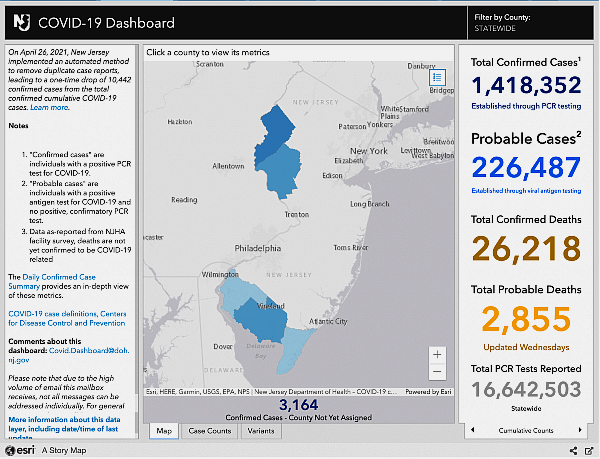 Both counts are record, single-day totals amid what Murphy termed an “omicron [variant] tsunami [that] has changed the game yet again.”

Given that the results of an unknown volume of home tests aren’t being reported to health authorities, Murphy advised residents to regard those totals, staggeringly high as they are, “as a floor.”

“The numbers we’re seeing today blow any we’ve seen at any part of the pandemic out of the water,” he said.

Despite the existence of some 1,000 COVID-19 testing sites across the state, the governor acknowledged that lines are long and few appointments are available. Even the free test kits mailed by Vault Medical Services have been capped at 30,000 tests daily, a wall some residents hit when trying to order a test over the holiday weekend.

“We’re seeing new case counts that dwarf what we’re seeing even in the earliest days,” Murphy said. “The fight is not over, but we can shorten it if we all take this seriously.”

The governor used his own family’s circumstances as an example: First Lady of New Jersey Tammy Murphy, who is both fully vaccinated and boosted, tested positive twice over the weekend (the governor did not).

Sadly, 12 more residents have perished from complications related to the virus, bringing the statewide, confirmed death toll to 26,218 lives lost during the pandemic.

In addition to those lab-confirmed fatalities, the state has acknowledged another 2,855 probable COVID-19-related deaths—13 more than previously reported.

More than 16.642 million polymerase chain reaction (PCR) tests for COVID-19 have been performed statewide, with a 15.90-percent positivity rate per 100,000 residents.

The statewide average of COVID-19 spot positivity testing based on PCR test results stood at 32.2 percent December 30; in South Jersey, it was lowest, at 28.22 percent.

Rt, the variable that describes the seven-day, rolling-average, statewide rate of transmission of new COVID-19 cases, rose to 1.74 on January 3.

COVID hospitalizations climb to levels unseen since May 2020

That’s half the total during the pandemic peak of 8,270 during April 2020, he said, and a direct result of “the sheer numbers of new cases,” he said.

“We have more people in the hospital today than at any point in the past year, and the most since the early part of May 2020,” Murphy said.

The governor also reported that roughly 70 percent of those patients “are unvaccinated or not completely vaccinated.”

Among those hospitalized patients, 644 are in intensive or critical care, and 284 of the ICU and critical-care patients (50 percent) are on ventilators.

In New Jersey’s 71 critical care hospitals, 846 patients were hospitalized with COVID-19 yesterday, while 461 others were discharged.

Due to the spike in volume, many hospitals have no choice but to pare back services; New Jersey Health Commissioner Judy Persichilli reported that selective and optional procedures (Levels 4 and 5) are being temporarily suspended.

Persichilli also reminded residents that “the emergency rooms are not COVID testing sites,” and urged them to “use state resources to find one of the 1,000 testing sites across the state.

Meanwhile, the pandemic is also driving staffing shortages at hospitals across the state, and subsequently, health officials have made requests of the U.S. Federal Emergency Management Agency (FEMA) for “federal strike teams” to support hospitals and long-term care (LTC) facilities.

The state will not pursue offsite clinics, which had been erected as overflow facilities during the early months of the pandemic, because they were more of a strain on existing hospital resources, Persichilli said.

Across the state, long-term care (LTC) centers have reported 1,980 cumulative outbreaks of COVID-19, and 439 are dealing with an active outbreak.

LTCs account for 59,858 infected patients and staff in New Jersey, or 4.9 percent of total cases.

That includes 36,998 residents and 28,860 staffers sickened by the virus, as well as 8,775 lab-confirmed resident and staff deaths (34 percent of the statewide confirmed total), with facilities self-reporting 145 staff deaths.

Of 635 veterans residing in three state-run homes, 456 residents have tested positive for COVID-19, and 161 have died from complications related to the virus—three more than previously reported. Three hundred veterans have recovered from the virus, and 32 currently are COVID-19-positive.

The facilities at Menlo Park, Paramus, and Vineland are staffed by 1,371 workers, 10 of whom are presently COVID-19-positive. The facilities have sustained two staff deaths related to the virus.

At state-run psychiatric hospitals, 378 of 1,139 patients and 1,136 staff members have tested positive for COVID-19. Fourteen patients and eight staffers have died from complications related to the virus, and 75 are currently positive.

MISC and school cases up

To date, 155 New Jersey children aged 1 to 18 have been diagnosed with pediatric multisystem inflammatory syndrome (MISC)—three more than previously reported. Five of those cases were reported in Camden County, which tied with Cumberland and Monmouth Counties for sixth-fewest in the state.

Since the start of the 2021-2022 school year, 373 reported outbreaks—three or more students or staff who contracted the virus within the school—have been logged, affecting 2,123 people, a mix of students and staff.

In Camden County, 39 COVID-19 outbreaks have accounted for the in-school infections of 295 people, which is the largest case count of any county in the state, and more than the county had sustained in the entire prior school year.

More than 13.031 million primary-series COVID-19 doses have been administered in New Jersey, with 6.219 million people have been fully vaccinated in-state, having received either a one-shot formulation from Johnson and Johnson or both doses of the two-shot Pfizer or Moderna vaccines.

In Camden County, 691,539 doses have been administered, seventh-most in the state; 334,485 people have been fully vaccinated.

An estimated 512,890 vaccine doses have been administered to New Jersey residents outside of the state, of which 210,394 residents are estimated to have been fully vaccinated.

The unvaccinated remain at the greatest risk of serious illness or death from omicron, Persichilli said, urging all residents to receive their shots and boosters; only 35 percent of those eligible have received one.

The health commissioner also pointed out that those who received a Pfizer primary series is eligible for a booster at five months instead of six, which includes some 155,000 (61 percent) 12-to-15-year-olds; similar approvals are expected for the Moderna boosters as well.

Kids 5-11 who’ve received a solid organ transplant, or who are considered moderately or severely immunocompromised, are eligible for an additional Pfizer dose 28 days after completing the initial series.