Following reports of a handful of adverse events among women with low blood platelet counts, the U.S. CDC advises that states pause administering the Johnson & Johnson vaccine until further studies can be conducted. 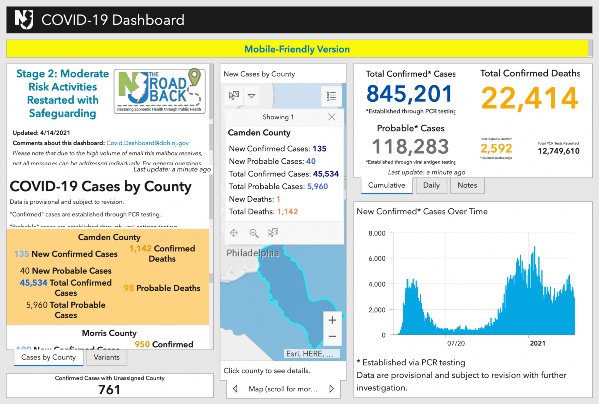 Sadly, 43 more residents have perished from complications related to the virus, bringing the statewide, confirmed death toll to 22,414 lives lost during the pandemic.

In addition to those lab-confirmed fatalities, the state has acknowledged another 2,592 probable COVID-19-related deaths—19 more than previously reported.

More than 12.749 million polymerase chain reaction (PCR) tests for COVID-19 have been performed statewide, with an 9.53-percent positivity rate per 100,000 residents.

The statewide average of COVID-19 spot positivity testing based on PCR test results stood at 11.04 percent April 10; in South Jersey, it was highest, at 11.43 percent.

Rt, the variable that describes the seven-day, rolling-average, statewide rate of transmission of new COVID-19 cases, hit 0.92 on April 12.

Among those hospitalized patients, 457 are in intensive or critical care, and 254 of the ICU and critical-care patients (56 percent) are on ventilators.

In New Jersey’s 71 critical care hospitals, 255 patients were hospitalized with COVID-19 yesterday, while 233 others were discharged.

“A large percentage of hospitalizations are under the age of 60,” Persichilli said. “In December, that percentage was approximately 35 percent. We have seen a rise in those individuals being admitted to the hospitals in younger age cohorts, particularly those under 60, from 35 percent to 49 percent.”

Across the state, long-term care (LTC) centers have reported 1,373 cumulative outbreaks of COVID-19, and 231 are dealing with an active outbreak. LTCs account for 54,402 infected patients and staff in New Jersey, or 6.43 percent of total cases.

That includes 32,654 residents and 21,758 staffers sickened by the virus, as well as 8,006 lab-confirmed resident and staff deaths (36 percent of the statewide confirmed total), with facilities self-reporting 143 staff deaths.

Presently, four veterans are hospitalized with COVID-19; 300 have recovered from the virus.

To date, 114 New Jersey children aged 1 to 18 have been diagnosed with pediatric multisystem inflammatory syndrome (MISC), Persichilli said. Four of those cases were reported in Camden County, tied with Cumberland and Monmouth Counties for third-least in the state.

Since August 1, 2020, 245 COVID-19 outbreaks encompassing 1,094 individual cases have been traced to schools in 19 New Jersey counties. In Camden County, 16 outbreaks have been linked to 74 cases, fifth-most in the state.

Across New Jersey, 5.641 million COVID-19 inoculations have been administered, and 3.589 million people have received at least one vaccine dose.

Throughout the state, 2.292 million people are fully vaccinated, having received either a one-shot formulation from Johnson & Johnson or both doses of the two-shot Pfizer or Moderna vaccines.

In Camden County, 333,355 doses have been administered; seventh-most in the state.

The first vaccines in the state were administered December 15, 2020; by February 8—55 days later—New Jersey had immunized its millionth resident. Twenty days thereafter, that count hit 2 million, and 3 million within two more weeks. On March 29, New Jersey crossed the 4-million-dose threshold, and the state cleared 5 million doses over the weekend of April 10, 2021.

Mutated offshoots of COVID-19, or “variants of concern,” continue to circulate throughout New Jersey; Persichilli reported that the state has traced 1,164 such cases to date.

It’s associated with a 50-percent increase in COVID-19 transmission over earlier strains of the virus detected in New Jersey, “and likely increased severity, based on hospitalization and case fatality rates,” Persichilli said. 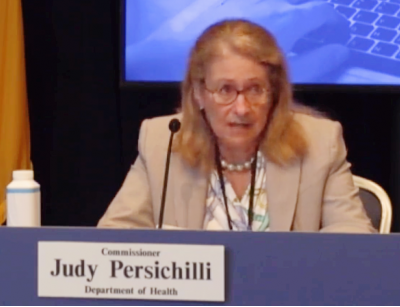 Following guidance from the U.S. Centers for Disease Control (CDC), rollout of the Johnson and Johnson (J&J) COVID-19 vaccine has been put on hold across the country amid reports of blood clotting issues identified in the cases of six patients who had received the vaccine.

They developed symptoms within six to 13 days after having been vaccinated.

She urged anyone who has received that vaccine and who experiences leg pain, abdominal discomfort or pain, shortness of breath, or a severe headache, to call a healthcare provider or visit the hospital.

In New Jersey, 47,266 women aged 18 to 48 have received the J&J vaccine, but “no similar reports” of blood clotting issues have been received by health officials, Persichilli said. Statewide, that J&J formulation accounts for “only about 4 percent of the 5.6 million total doses administered,” Murphy said.

“This review is critical to our efforts statewide and nationwide to ensure confidence in the vaccinations themselves,” the governor said, adding that holding off on the J&J formulation won’t affect wider opening of vaccinations to the entire population April 19.

“It’s not surprising that when you put these vaccines into millions of individuals, that you’re going to find a rarer effect,” said Dr. Eddy Bresnitz, medical adviser to the New Jersey Department of Health, pointing out that the adverse effects reported with the J&J vaccine occurred at a rate of about 1 in 1 million.

“Really, it’s about transparency and making sure that the public knows that someone is watching,” Bresnitz said. “We’re going to assess whether these are causal associations and whether the benefits outweigh the risks.”

The one-shot vaccine formulation and its ability to be stored without special refrigeration had made the J&J dose the preferred vaccine health officials selected for some of the most vulnerable populations in the state. Putting it off to the side, even temporarily, will slow efforts to inoculate them, Murphy said.

“The notion of cold-chain storage and two appointments is really hard with some of these hard-to-reach populations,” he said.